Wally Downes is pleased to have a full complement of players to select from at a crucial time of the season.

With no fresh injury worries ahead of the match against Bristol Rovers, the manager believes he has a ‘vibrant’ squad to choose from with just four games to play in the League One survival stakes.

Speaking during an interview for iFollow, Wally said: “Everything is building nicely and it’s a selection problem for me. The only part of my job that I don’t really enjoy is disappointing players who work so hard all week and they can’t get into the squad, but they know it’s a joint effort. They are all putting the effort in and they will probably be needed before the end of the season so it’s pointless getting overly disappointed. Of course, they want to play, but as long as it doesn’t turn into sulking or anything negative, I’m happy. If they are not happy being in the team, that’s great, but they need to get on with it and make sure they are ready when required.

“The players have to be relaxed, focused, and they have got to be happy. They’ve got to be enjoying what they are doing. That applies to my staff and also everyone that comes to the games. We are playing well and we can be a part of something that’s really good. We’ve got to enjoy what we are doing and look forward to every game as it comes.

“The staff have been terrific and their contribution is immeasurable. I thank them every day and it’s terrific the way that they’ve got the players back out there after injuries.”

Several first-teamers, including captain Deji Oshilaja, pushed towards full fitness by playing in a midweek development match against Cheltenham Town and Wally praised the attitude of those involved.

“I’ve said all along that the players have really responded well. They were given the option to play in the game because the pitch at Merstham isn’t great at the moment with how hard the pitches are at this time of year. It would have been easy for them to dip, but none of them turned it down. Everybody applied themselves well and we won 3-1. They are bright and bubbly and all the loan boys are out scoring goals and helping the teams they are playing for, so it’s a really vibrant place to be. That’s what we want the last four games to be like with everyone enjoying what we are doing.”

Friday’s opponents Bristol Rovers side earned a last-gasp 3-2 win against Bradford City last time out and they are five points ahead of Wimbledon heading into this match.

“One of their strikers (Jonson Clarke-Harris) has been on a really good run, he’s got 12 goals in 13 games I think it is, and they’ve had a good run. Then they dipped off and won again on Saturday, so they will be buoyant, but we are really looking forward to the game. Everyone is in a bright mood and glad to be a part of what we are doing.”

The full interview with Wally Downes is available to watch by clicking on the link to our iFollow channel above.

AFC Wimbledon had to settle for a third successive draw after a fantastic strike from Ollie Clarke salvaged a point for Bristol Rovers.

The Dons controlled the first-half and led thanks to a brilliant goal from Joe Pigott, but Clarke’s 25-yarder meant that it ended 1-1. It leaves Wimbledon a point off the fifth from bottom placed team in League One and battling to stay in the division. There was certainly a feeling that Wimbledon had missed a real opportunity after dominating the first-half, but it was a goal of real quality for the equaliser.

Wally Downes made just one change to his starting line-up after last Saturday’s resolute draw at Oxford United. Rod McDonald came back into the side with Terell Thomas having to settle for a place on the bench. Wimbledon headed into this match unbeaten in three matches, but two of those had been draws. The fact that The Dons moved up a place last week with a draw showed how close it was in the battle to stay in League One and Wally’s boys knew that a win would edge the club closer to another season in the third tier of English football.

Considering what was riding on the match – Bristol Rovers were not completely safe themselves – it was a nervy start from both sides. Wimbledon put together a fine move in the seventh minute, which ended with Scott Wagstaff putting over a fine cross that almost picked out Toby Sibbick. At the other end, Rovers danger-man Jonson Clarke-Harris found space on the right, but Will Nightingale did well to block his shot.

It had been a first 20 minutes of little goalmouth action, but the Wimbledon faithful started to raise the decibel levels after Pigott’s goal-bound shot was scrambled clear. Though the subsequent corner came to nothing, it was a sign that Wimbledon were starting to find an attacking edge. That was in evidence in the 22nd minute when the ultimate reward was earned in fine style. Anthony Hartigan picked out Pigott in space on the left, but there was still plenty of work to do for the in-form striker. What followed was a sumptuous strike as Pigott swept the ball over the reach of Rovers keeper Jack Bonham and into the back of the net.

Far from sitting on the 1-0 lead, Wimbledon piled on the pressure and came so close to doubling the advantage just after the half hour mark. Steve Seddon’s powerful header was well saved by Bonham, who was beaten by Wordsworth’s follow-up, but the shot was cleared off the line. As we approached half-time, Rovers had offered little as an attacking force in the first-half, but James Clarke fired a warning shot from 30 yards with his powerful effort flashing just wide. However, the 1-0 lead at half-time far from flattered Wimbledon and it could have been more.

Having surrendered half-time leads at home in recent months, it was going to be a test of Wimbledon’s character in the second-half. Rovers started after the break with a bit more attacking ambition, without really threatening, as Wimbledon held firm in defence. There had been little to trouble Wimbledon for the first 10 minutes of the second-half, but Rovers began to turn the screw as we approached the hour mark. A big chance followed when Rovers managed to get in behind the Wimbledon defence with Gavin Reilly clean through, but Aaron Ramsdale was off his line quickly and he made a superb save to retain the lead.

Wally Downes made his first change in the 64th minute with Michael Folivi entering the fray for Joe Pigott, who deservedly received a standing ovation for his all-action display. Folivi was straight into the action and he almost scored the decisive second when he turned inside and curled just wide of the far post. As the second-half progressed Rovers cranked up the pressure. Ed Upson struck a shot that Ramsdale did well to gather. However, there was absolutely nothing that Ramsdale could do about a wonder strike in the 78th minute. Ollie Clarke let fly with a 25-yard strike that left Ramsdale with no chance of saving it.

With 10 minutes to go, Wimbledon made a double change with Dylan Connolly and Tom Soares replacing Scott Wagstaff and Anthony Hartigan. The Dons responded well to the setback of conceding an equaliser. Folivi had a header well saved and then the substitute almost got on the end of a lovely cross by Seddon. Hanson also came tantalisingly close when he headed just over the crossbar after a fine cross by Rod McDonald.

We have sold out of all tickets for Good Friday’s important clash against Bristol Rovers (3.00 pm kick-off).

The Dons will be aiming to take another step towards League One survival by securing three points against a Rovers side currently occupying 14th place in the table.

Below is a summary of match arrangements for the game on Friday:

These will be open from 12 noon with a wide selection of drinks to choose from, including real ales. Look out around the ground for the Bloody Bens Gin, who will be handing out free gin samples (over 18s only) before the match. This locally distilled gin will make for an ideal pre-match refreshment this sunny Good Friday.

Unfortunately, we are unable to welcome Bristol Rovers supporters into the bar areas. Please note that home fans will have their tickets checked by door staff to gain entry into all bars (pre-match, half-time, and post-match).

With Terry Brown as special guest for Saturday's game, we spoke to our former manager about his latest role in football – as club chairman at Basingstoke Town! We also caught up with Nik Tzanev who recently signed a new contract at AFC Wimbledon, discussing the progress he's made since joining us two years ago and about his bid to become number one. For one match only – due to Erik Samuelson's retirement – Dons Trust Chair Mark Davis writes the "From the Boardroom" page, focusing on Joe Palmer's appointment as the new CEO. All the usual news and features are included in your match day programme, priced at £3.

Tickets for Luton away

This is an all-ticket fixture and tickets must be bought online by 4.45 pm this Good Friday. No tickets will be on sale on the day at Kenilworth Road on Tuesday 23 April (7.45 pm kick-off).
Please note tickets will also be available to buy at our ground, before and immediately after tomorrow's game.

Buy from our online ticket shop (until 4.45 pm Good Friday) at the following prices:

Disabled supporters (non-wheelchair) will pay one category lower in the normal prices stated above with a carer admitted free of charge (higher and middle DLA). Five wheelchair spaces are available and you can contact the Luton's ticket office directly on 01582 416976 to book.

Young Dons fans have extra incentive to look out for Haydon the Womble! Our mascot from Wimbledon Common will be handing out FREE Easter eggs before the game.

Anna Kingsley and Colin Dipple will be available to talk to at the kiosk. You can also join the Trust or renew your membership at the kiosk, sign up to the Dons Draw (our regular monthly lottery), or donate loose change, foreign currency or items for AFCbay (our online auction).

Put yourself in with a chance to win the £100 first prize by buying a Golden Goal ticket tomorrow! Tickets cost just £1, so look out for our Golden Goal sellers around the stadium before the game. 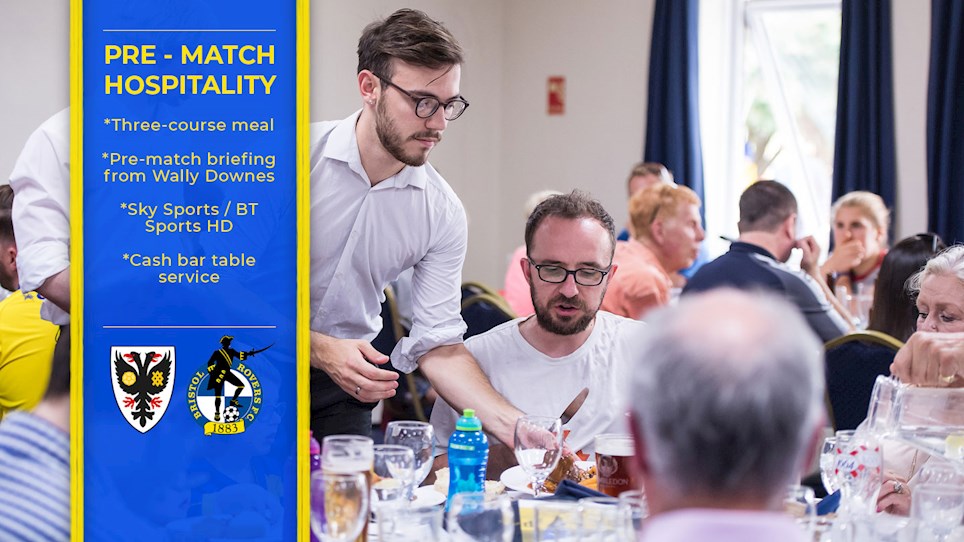 
Kick-off the Easter Bank Holiday weekend in style and book yourself a slice or pre-match hospitality with The Dons. 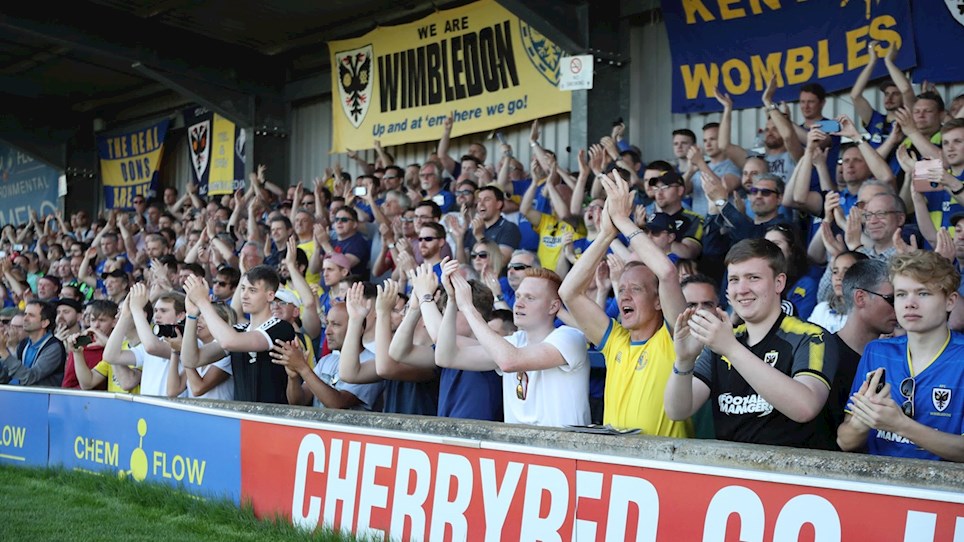 
We are now sold out for Good Friday’s game against Bristol Rovers. There is a waiting list for both seats and terrace tickets in operation. Bring on Friday! 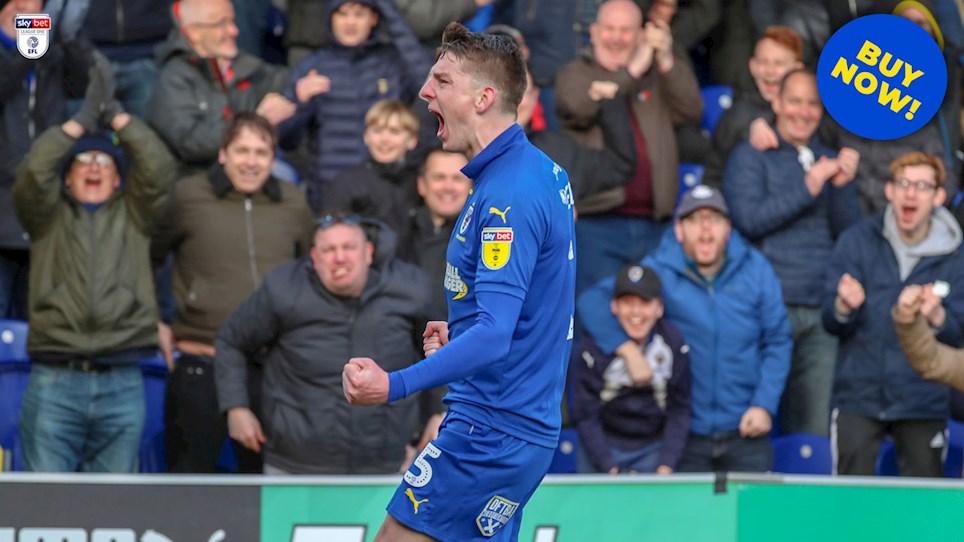 
Final few tickets remain for Good Friday’s game against Bristol Rovers. Kick-off the bank holiday weekend and get behind The Dons!