Wally Downes has called on his players to embrace the challenge of keeping Wimbledon in League One, as they prepare for another important match at Oxford United.

The match at the Kassam Stadium pitches together two in-form sides and Wally’s boys have an opportunity to move out of the bottom four with a victory.

Speaking during an interview for our iFollow interview, Wally said: “They have got to enjoy what they are doing. When I spoke to them the other day I said that they have to be in the ‘now’. You have got to enjoy what you are going to be a part of. A lot of people didn’t give us a chance when I came in. Last year there was a great survival bid and I’m sure that the players involved in it will remember that. It’s important that they enjoy what they are doing at the moment. Don’t focus on what goes beyond. Enjoy what you are doing and creating, giving yourself a chance, and look forward to the next game.

“They have set some standards now that they cannot afford to fall below. They are professionals, they are playing well, they are being successful, and everyone can see that, but they cannot afford to fall below those standards. Subsequently, players coming into the squad or joining in with the group, they need to raise their game to be a part of it.”

The full interview with our manager can now be viewed by clicking on the link above to our iFollow channel.

It was far from pretty as Wimbledon laboured to create anything of note in attack, but there was plenty of grit and determination required to grind out a 0-0 draw. With other teams down near the bottom failing to win, Wimbledon actually moved up a place in the table to 21st and over 1,300 travelling Dons appreciated the effort put in, applauding the whole squad after the final whistle.

AFC Wimbledon came into this match seeking to end Oxford’s impressive run of form with the U’s having won four on the bounce. However, there were plenty of reasons for Wimbledon to be confident, including the fact that The Dons had taken 20 points from the last 10 games before this match. Wally Downes was forced into one change with Rod McDonald unavailable and that meant a recall for Terell Thomas at the heart of defence.

Wimbledon made a bright start, taking the game to Oxford from the outset, and there was a chance within minutes when Anthony Hartigan picked out James Hanson with a lovely ball to the back post, but the striker headed over the crossbar. The Dons had established good possession early on with Hartigan seeing plenty of the ball in the middle, but Oxford gradually started to come into it. A first chance followed for the hosts when Rob Dickie got on the end of a corner, but he headed just wide of the near post.

Joe Pigott had been on the receiving end of some rough treatment from the Oxford defence and he needed attention for a bloody nose midway through the first-half. Shortly afterwards Pigott finally earned a free-kick for his troubles and he took it himself, but he fired it straight into the wall. Oxford started to build-up a head of steam at around the half hour mark with former Liverpool midfielder Cameron Brannagan pulling the strings in midfield. The hosts fashioned a great chance through a lovely move in the 36th minute. Gavin Whyte was picked out by Mark Sykes and his cross fell nicely for Luke Garbutt, but his shot was superbly saved at point-blank range by Aaron Ramsdale.

With Oxford’s pressure having grown during the first-half, it was important that Wimbledon showed resilience in the spell leading up to the interval. Brannagan turned inside and struck a shot that hit the outside of a post, before Sibbick did well to cut-out a cross from Jerome Sinclair. The half-time whistle sounded with the score at 0-0 and Wimbledon having defended stoutly, but without much threat at the other end.

The Dons were on the back foot at the start of the second-half and there was relief among those in blue when Sinclair just failed to get on the end of a low cross. Then Dickie tried his luck with a shot that flashed over the crossbar with Ramsdale struggling to get there. Oxford came even closer when Whyte set-up Brannagan, but Ramsdale got down well to save and Wimbledon just managed to scramble the ball clear. At the other end, a rare Wimbledon attack ended with Hanson striking a powerful shot just over the crossbar.

With 55 minutes on the clock Wimbledon made a change with Shane McLoughlin introduced for Anthony Hartigan. The Dons were continually forced back by Oxford and when the ball did go forward Hanson and Pigott came up against a well-drilled home defence. However, Ramsdale was required to make another fine save when he reacted well to deny Oxford substitute Jamie Mackie. Wimbledon just about survived in the 80th minute. Will Nightingale just managed to clear Mackie’s effort off the line, Oxford’s appeals for a penalty falling on deaf ears and Dylan Connolly cleared the danger.

Wimbledon were forced into resolute defence in the latter stages, but Oxford did threaten in the last minute of normal time. Mackie cut the ball back to Whyte, whose shot was just over. The Dons held on doggedly and it could turn out to be another vital point in the battle to stay up.

Great work Dons! We have sold out of our online pre-sale allocation. If you have not already bought a ticket, you can still buy one on the day (cash only). Please factor in extra time and get to the Kassam Stadium early.

We will have a big following on Saturday and recommend getting to the game nice and early to avoid any delays.

Please note you can no longer buy a ticket in advance. However, you can buy on the day (cash only).

Disabled Supporters: Please note disabled supporter tickets are set at the relevant price based on their age. A free carer ticket can be given where needed. Please get in touch with our ticket office on 020 8547 3528 (09:30 - 17.00 Monday to Friday).

Supporters’ Coach: The coach is now sold out for our trip to Oxfordshire. It will pick-up from opposite South Wimbledon tube station at 11.45 am and from the Cherry Red Records Stadium at 12.15 pm.

Parking: There are 2,000 free car-parking spaces at the stadium available on a first-come basis, including dedicated disabled bays adjacent to the away ticket office. Match programmes are available inside the concourse and from sellers around the ground and in the club shop, which is adjacent to the DW Fitness gym in the Ozone Leisure Centre.

Food & Drink: The stadium offers food and drinks (including alcoholic drinks) in the concourse. There is also the nearby Ozone Leisure Centre, between the west car park and the overflow car park, which features a Vue Cinema, Hollywood Bowl, Frankie & Bennies, Oxy Oriental, fish and chips and the Oxford United club shop.

Let’s make some noise for The Dons next Saturday.

Buy your Oxford tickets in advance


Come on you Dons! We travel to Oxford United this Saturday to continue our push for League One safety. Please note the supporters' coach is sold out. 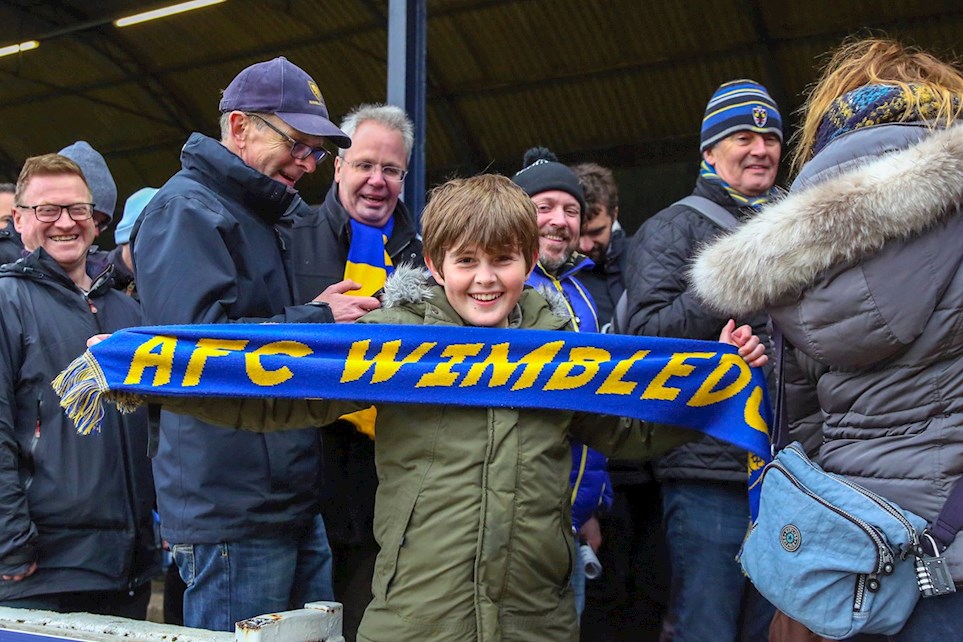 
Come on you Dons! We travel to Oxford United this Saturday to continue our push for League One safety. Please note the supporters' coach is sold out.