Neal Ardley believes his squad can cope with the rigours of three tough home matches in a week and he is likely to make changes for the first challenge against Walsall on Tuesday night.

Speaking during an interview for iFollow, our manager reported no fresh injury worries after the creditable 0-0 draw at Barnsley. The match against Walsall is the first in a testing, but exciting week, that includes games against Sunderland and West Ham.

Taking on Walsall is the primary focus for the manager at this stage and he knows that there are one or two players that would benefit from sitting out the match.

"Walsall are a totally different team from last year," said Neal. "Dean (Keates) has got them at it, they have pace in their team, a bit of physicality, and they've already asked questions of teams that they've played against. We need to make sure we are up for that challenge. We've got to look at our own squad and work-out how we are going to get through these games. There is not one player that can play six games in three weeks, it's just impossible. We run a huge risk of injuring them.

"There are no fresh injuries, but there are a couple who are fatigued and have little niggles. There will be changes over the course of the next few games, I doubt there will be exactly the same team for any of them. We are looking at different qualities maybe in some areas, but one or two may need to take a step-back because we have concerns about their fitness. They may need to have a night off and we have total faith that others will come in and do a job, so don't be surprised if you see one or two changes.

"We played against Reading, QPR, and Brighton in pre-season. We were well aware of the qualities that they had and the way that they played, so that serves us well for playing against teams like West Ham and Sunderland. We are well equipped. I know that those games were in pre-season so it is slightly different, but I still feel tactically we can do it. I also feel we have enough threats in our teams to cause problems. First and foremost, we are up against a team (Walsall) that are in form and near the top of the league. That has to be our priority."

With three important home matches coming up, Neal has called on Wimbledon supporters to really get behind the team.

"I always like evening games under the floodlights," said Neal. "It generates a good atmosphere, so hopefully there will be no holding back on the passion and the atmosphere that we do create as a club. We have three big challenges coming up and I think the squad are up to it."

The full interview with Neal can be viewed by clicking on the link to our iFollow channel above and you can see a two-minute clip from it below.

AFC Wimbledon were beaten for the first time in 2018/19 tonight with Walsall earning a victory margin that certainly flattered them.

Though the League One high-flyers showed at times why they've made such a good start to the season, the 3-1 victory came through two real slices of fortune. With Wimbledon having piled on the pressure at 1-0 down, Will Nightingale scored an own goal and then Toby Sibbick was unlucky to see a clearance bounce in off Andy Cook. There had been nothing wrong with either of their performances overall and on the balance of play Wimbledon's team display certainly didn't deserve such an outcome.

With Neal Ardley having said in the build-up that he was likely to make changes for this match due to a busy schedule, it was no surprise to see that reflected on the team sheet. Five changes were made with Toby Sibbick, Rod McDonald, Mitch Pinnock, Anthony Wordsworth, and Joe Pigott all earning recalls in place of Tennai Watson, Deji Oshilaja, Scott Wagstaff, Tom Soares, and James Hanson.

Walsall came here on the back of seven points out of nine and a win in the Carabao Cup and they exuded confidence in the early exchanges. A cross in the third minute was met by Andy Cook, but the striker could not direct his header on target. By that stage, Walsall had perhaps been fortunate to hear referee Terry Nield blow for a foul at the other end with Andy Barcham penalised in the box after challenging Nicky Devlin. There was relief for Wimbledon at the other end when Devlin dragged a good chance across the face of goal.

In a first-half that was end to end with both sides really going for it, Pinnock drove forward and struck a powerful effort that flashed just wide. However, the opening goal followed in the 16th minute for Walsall when Cook headed down to set-up Kieron Morris and his fine strike beat Tom King in the Wimbledon goal.

Wimbledon had conceded a first league goal this season, but a superb response followed from Neal Ardley's men. The Dons laid siege to the Walsall goal, midfielders Pinnock, Wordsworth, and Liam Trotter pouring forward at every opportunity and plenty of chances subsequently following. Pinnock struck just wide once again, this time volleying off target. Midway through the first-half came a near miss that would have been an early contender for goal of the season if it had hit the back of the net. Wordsworth struck a brilliant effort from 30 yards that just missed the far post and it was a moment that the home faithful drew encouragement from. For the rest of the first-half they roared on their team and the players really responded to the backing. Kwesi Appiah, who was trying everything to open his account for the season, headed over after getting on the end of a cross from Will Nightingale.

As we approached half-time, Wimbledon continued to commit men forward, but a goal just wouldn't come. Pinnock, who was a real driving force in the first-half, this time showed his ability from a free-kick with a 30-yard effort that just flashed over the crossbar. The half-time score of 1-0 in Walsall's favour certainly didn't reflect the way this game had gone and Wimbledon could take confidence from the display so far.

The Dons wasted no time going for it at the start of the second-half and Pigott shot wide of the target. Then Andy Barcham showed great skill to find space on the left flank and his cross had to be diverted away from danger by Walsall keeper Liam Roberts. Walsall did offer a threat on the break and Wimbledon needed typical commitment to the cause from Nightingale, the defender putting his body on the line to block a goal-bound shot from Morris. Sibbick was also producing a performance to make our academy proud as he showed good composure on the right side of defence.

Neal Ardley decided to make a change on the hour with James Hanson replacing Joe Pigott up front. A good chance followed for Hanson almost immediately, but his header from a corner was over the crossbar. Wimbledon continued to press forward in search of an equaliser, but Walsall doubled their advantage in unfortunate circumstances in the 70th minute. Nightingale attempted a back pass from the right-back position, but he struck it with too much power and Tom King was left with little chance to save it. Still Wimbledon didn't let heads go down and Hanson and Pinnock both had efforts blocked.

With 12 minutes to go, Wimbledon suffered more bad luck when a shot from Morgan Ferrier was blocked and Sibbick attempted to clear it, but the ball rebounded off Cook and into the net. Walsall had certainly benefited from two slices of fortune in this match, but Wimbledon continued to probe and a goal back followed in the 87th minute. Sibbick set it up with a fine run down the right before delivering a cross that fell nicely for Appiah, who cracked home emphatically. Though Wimbledon continued to go forward, a second goal wouldn't come and the final whistle signalled a first defeat of the season for the Dons.

AFC Wimbledon’s first midweek home match of 2018/19 is tonight against Walsall (7.45 pm kick-off) and tickets are available to cheer on Neal Ardley’s men.

Our manager said he’s looking forward to our first game under the lights this season at the Cherry Red Records Stadium and your support can help the squad maintain an impressive start to the campaign.

Below is a summary of ticket availability and other match arrangements:

Seated areas are sold out, but we do have availability in terraces. Buy in advance now from our online ticket shop (until 4.00 pm today). There are currently tickets available for the popular Chemflow terrace and the RyGas Stand. Tickets purchased in advance can be collected from the white booth in Jack Goodchild Way.

These will be open from 5.00 pm tonight with a wide selection of drinks, including real ales available. The ales served in both bars will be as follows:

We will be pleased to welcome Walsall supporters into the bar areas.

Dons Trust members and people interested in the work of the Trust are welcome to visit the Dons Trust kiosk before the match. You can ask board members Charles Williams and Roger Evans about the work of the board generally or their own specific roles. Charles is a member of the board’s Engagement & Communications committee, whilst Roger is a member of the board’s Stadium committee. You can also join the Trust or renew your membership at the kiosk, sign up to the Dons Draw (our regular monthly lottery) or donate loose change, foreign currency or items for AFCbay (our online auction). Please note that we no longer collect printer cartridges.

This will be available at the usual price of £3 and it’s well worth adding to your collection. There’s an extensive interview with Anthony Wordsworth (pictured), who tells us why Wimbledon’s traditional role as the underdog is of particular appeal to him. Chief Executive Erik Samuelson’s ‘From the Boardroom’ update includes news about changes being made around the club at the current time. With all the usual features, news items, and match photos, there’s plenty in our latest edition to keep you informed about your club.

Season Ticket holders should please note that you cannot collect or purchase tickets tonight for next week’s Carabao Cup tie. The deadline for ST holders to order is 5.00 pm on Wednesday and these will then be sent out by the club. For more information, please see our previous article. 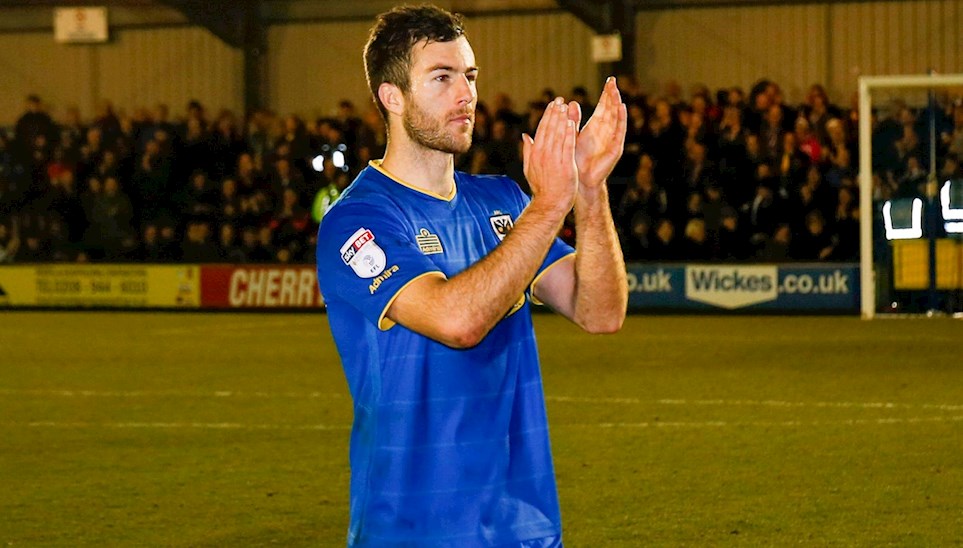 Jon Meades returns as guest of honour for the Walsall game