Wally Downes has urged the current squad to revel in their return to form by making it count against Blackpool on Saturday.

Though Wimbledon take on a side currently eighth in League One, two wins in succession have restored faith that the Dons can stay up this season.

Speaking during an update for our iFollow channel, Wally said: “There was only one direction for us to go in initially, so anything we’ve got has made the players look up. To string the two wins together has given them a lot of confidence because it’s brought us closer back to the pack. It’s looking a lot tighter there now.

“You can’t hide away from what you’ve done. The weight of defeat had been around the place for so long, it’s great to get rid of that, and now we have to continue with the winning mindset. The two victories, as great as they were, will be lost on us if we don’t carry on and make it three in a spin. It’s not often you get the opportunity to get a nine-point week and with the position that we were in, it’s a great fillip for the group.”

Wally expects a tough match on Saturday, but he believes that recent performances – the Dons have lost just one in the last four – have put the squad in good spirits.

“I think it is a test for us to make sure that we carry on with the good work from recently," added Wally. "I’ve been saying that it’s all about looking forward and winning the next game, but the two wins must have instilled some confidence and enthusiasm for the way that we are playing as a team.

“Even with victories, in this schedule, it’s just a case of rest and recovery and doing some work in the classroom, including reviewing things, and previewing what we are going to be doing next. That’s equally as important as the physical work that we do.

“The analysts have been terrific, they’ve been working overtime during the holidays, and we’ve got enough information on Blackpool, but with rest and recovery anything we do on them is basically done in the classroom. The learning styles of the players are catered for, whether it’s vocal or visual, or written, we are getting the information into them.”

Wally reported that James Hanson (hip) will miss out on Saturday and so too will Scott Wagstaff (calf). Deji Oshilaja and Joe Pigott have both made good progress, but this weekend will come too soon for them.

The full interview with Wally is available to watch on our iFollow channel.

AFC Wimbledon's final match of the calendar year ended with a battling draw against Blackpool.

The Dons had to show plenty of resilience to secure a 0-0 draw against a Blackpool side that threatened to edge it. Goalkeeper Tom King made fine saves in the first-half and Wimbledon came closest to scoring when Terell Thomas headed wide from close-range.

It was not the ideal way for Wimbledon to end a difficult year, but it meant a very creditable total of seven points out of nine during the Christmas period.

Wally Downes made just one enforced change to his starting line-up after the victory against Plymouth with James Hanson missing out due to injury. That meant a starting role for Mitch Pinnock, who had bagged the winner in superb style against Plymouth after replacing Hanson in that game.

Blackpool came into this game aiming to get back on track on the road after a run of away defeats and they started well at the Cherry Red Records Stadium. Dons keeper Tom King was forced into action in just the fifth minute, diving to his left to stop a header from Armand Gnanduillet. At the other end, the first hint of a chance for Wimbledon followed when Andy Barcham crossed from the left, but Anthony Wordsworth was just unable to get on the end of it.

It was clear from the outset that Blackpool, managed by Terry McPhillips, were going to have the majority of the possession. Captain Jay Spearing, who has Premier League experience with Liverpool, was an influential figure at the heart of midfield, as he sprayed the ball around effectively. There was a cutting edge too and Chris Taylor struck a superb effort from outside the area that King did very well to save at full stretch. At this stage, Wimbledon were forced into defending deep with a focus on maintaining a good shape to stop Blackpool opening the scoring. There was a good chance for Blackpool midway through the first-half when Ben Heneghan rose highest in the box, but his header was just wide.

With 25 minutes on the clock, Wimbledon had struggled to create anything of note, which was no surprise considering Blackpool had dominated possession so much. However, the Dons did start to come into it after this point. There was a good free-kick opportunity for Mitch Pinnock, but he blazed well over the crossbar, and then Andy Barcham had a half chance after a cross fell nicely for him, but he could not get enough power on his effort and Blackpool keeper Mark Howard gathered.

Wimbledon's chance of the first-half came in the 40th minute when Pinnock curled in a lovely delivery from a corner that picked out Terell Thomas, but he headed wide from close-range. Though it was certainly a missed opportunity, it was an encouraging sign for Wimbledon. The half-time score of 0-0 was probably a fair reflection with Blackpool having had the better of it in the first 20 minutes, but Wimbledon exerting pressure as the half progressed.

Wimbledon started the second-half well. A fine ball from Tennai Watson picked out Jake Jervis down the right and he sent over a dangerous cross, but no one was able to get on the end of it. Then a fine move down the other flank ended with Barcham crossing from the left, but Mark Howard palmed it away from danger. Wally Downes made his first change in the 58th minute with Tyler Burey replacing Jake Jervis. Seventeen-year-old Burey wasted no time making an impact, skipping past a challenge with lovely skill, before being hacked down by Marc Bola, who received a yellow card. Wimbledon supporters really got behind Burey, as he attempted to make a difference with his runs down the right, but Blackpool were proving to be a tough nut to crack.

As we progressed towards the last 20 minutes, both sides continued to go for it. Blackpool's Harry Pritchard had a gilt-edged chance when a cross from the right reached him at the back post, but he hacked over the crossbar. Gnanduillet also had a very good opportunity, but his flick just missed the near post. In between, a goalmouth scramble in the Blackpool box resulted in the ball falling for Terell Thomas, but his goal-bound shot was blocked.

In injury-time, the Dons were fortunate that a header towards his own goal by Thomas was palmed away by King, who didn't know much about it, but defeat would have been harsh on Wimbledon.

AFC Wimbledon will be aiming to round off 2018 on a high by securing a third successive victory and tickets are available to show your support for Wally Downes’s men.

A Blackpool side currently flying high in eighth spot are the opponents, but there’s plenty of incentive for Wimbledon to grind out a win as it could move the Dons out of the League One relegation zone.

Below is a summary of ticket availability and other match details ahead of the game.

All seat tickets are sold out and so too is the Chemflow End, but we do still have availability for the RyGas terrace. You can order from our online ticket shop until 11.00 am tomorrow morning and collect pre-match from the white booth in Jack Goodchild Way. Please note that there had been a problem with our online ticket system, but this has now been rectified. Tickets for the RyGas terrace will be available on the day.

These will be open from 12 noon with a wide selection of drinks available, including a variety of real ales.

Televised football will be shown in the bars before and after Wimbledon versus Blackpool. First up, it’s the Old Firm derby between Rangers and Celtic from 12.30 pm and later on we will be showing the Premier League match between Liverpool and Arsenal (5.30 pm kick-off).

The Wimbledon Brewery pop-up bar will be well stocked with Pale Ale, Wimbledon Gold lager and bottled soft drinks will also be available to purchase. The Your Golf Travel Bar (main bar) will also be open as usual, selling drinks including Plough Lane Ale.

Blackpool supporters will be welcome in our bar areas before the game.

Your matchday programme for Blackpool is one well worth adding to your collection as it features an in-depth interview with Wally Downes, who recalls his difficult early days as a coach and how it shaped his career. Wally also talked in his interview about what his main challenges are in his new role, as he seeks to build on a positive start to life as AFC Wimbledon manager. As well as all the usual programme features and updates, there’s a report on the Junior Dons Christmas party, including pictures of first-teamers capturing the festive spirit!

Dons Trust members and people interested in the work of the Trust are welcome to visit the Dons Trust kiosk before the match. Come and ask board members Colin Dipple, Cormac van der Hoeven and incoming board member Rob Crane about the work of the board. You can also join the Trust or renew your membership at the kiosk, sign up to the Dons Draw (our regular monthly lottery) or donate loose change, foreign currency or items for AFCbay (our online auction). Please note that we no longer collect printer cartridges.

We will be selling tickets to Wimbledon supporters for our fixture on New Year’s Day at Fratton Park, against the League leaders Portsmouth. Tickets for our FA Cup third round tie at Fleetwood, on January 5, will also be on sale to Dons fans. These will be available, before or after the match, from the complimentary tickets window. 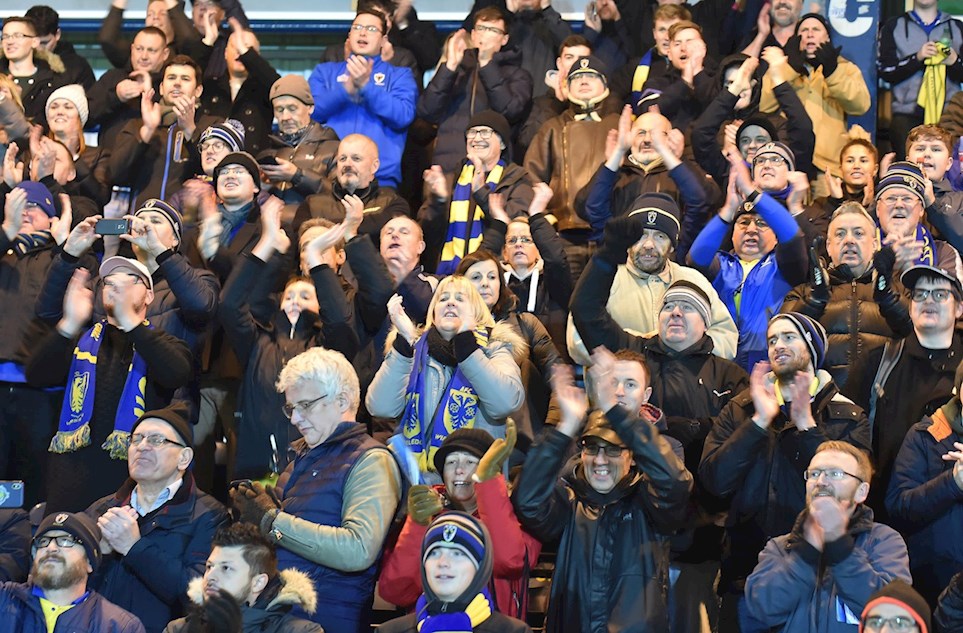 
AFC Wimbledon this Saturday go in pursuit of a third successive League One victory - and tickets are still available for you to cheer on Wally's boys. 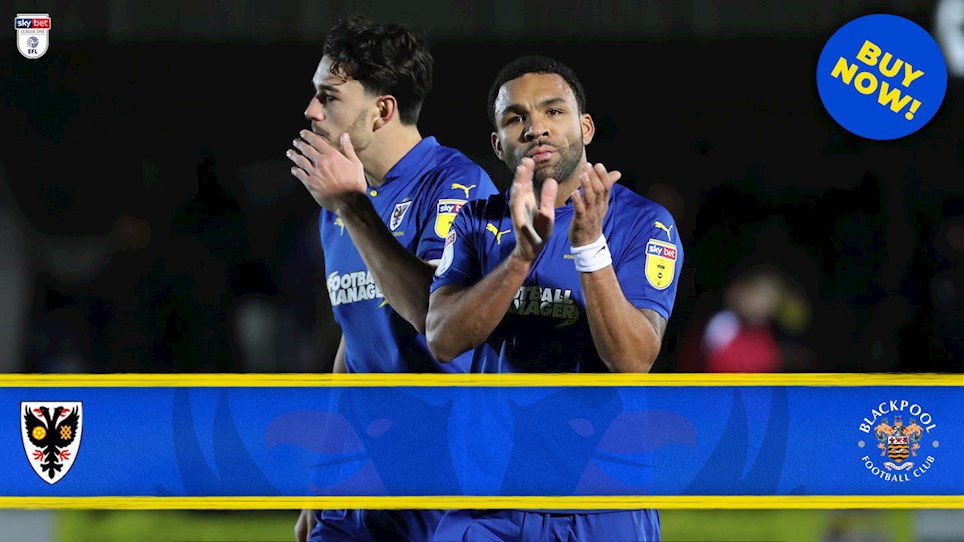 
Wally and the boys welcome Blackpool to the Cherry Red Records Stadium on Saturday 29 December for our final game of the year.

Treat yourself at our final game of 2018


For our final game of the year we welcome Blackpool to the Cherry Red Records Stadium. Enjoy our pre-match hospitality before you watch the Dons in action.