Wally Downes wants Wimbledon to pick up where they left off and maintain the standards they set, with another three vital points up for grabs against Plymouth on Boxing Day.

Wimbledon go into the festive period off the back of Saturday’s 2-1 victory at Wycombe, which ended their impressive run of form at Adams Park. Now the Dons want to make the Cherry Red Records Stadium a fortress of our own – starting against Plymouth, who sit directly above us and are just two points better off in the table.

Victory on Wednesday would not only avenge a defeat at Home Park in October for the Dons, but would also give our new manager his first home victory and back-to-back wins in the league. Most significantly, it would lift Wimbledon off the bottom of the table.

“Those players have set a standard now. If they fall below that then they are letting themselves down. I’ve got faith in them as players who want to turn it around.

“Plymouth are travelling a long way and that will be an advantage to us, but also they aren’t going to want to travel all that time over Christmas and roll over. I’m expecting as equally as tough a game as we had against Wycombe. If it is, the boys showed me on Saturday they can withstand a team that is riding high.

“We’ll have to see who has recovered okay and who hasn’t. It’s always difficult, but my policy is to look around and see who is available, who is fresh and who is ready to go and start again. It’s a squad game now. It’s not eleven players or when I was playing, twelve. You’re looking at sixteen or seventeen players all the time and how you utilise your substitutes is critical. You don’t like to be outthought and I like to keep us ahead and be pro-active instead of reactive.

“We’ve got something to build on now. That’s three points in the bag at Wycombe and we’ve got some important games, so if we can carry on in good form and get some more wins that will be good.

“This festive period is very important. If you can get yourself on a good run, there are games coming up quick so the points can tally up quite quickly and you can find yourselves moving up the league.”

“It’s a massive game, considering where both teams are,” said Plymouth’s captain.” It’s three points at the end of the line and we have got to go there and try to take them. I think every single game that we have got now is a big game. We have to approach it like that. We have got the second half of the season left to come to gather as many points as we can.

“Looking forward, you’d rather this be happening with the amount of games we have got left, rather than with five or six games left. We have got enough time to put this right and everyone in that dressing-room will be trying their best to do it.”

Wimbledon have Mitch Pinnock back in contention, having served a one-match suspension following his sending-off at The Valley against Charlton Athletic for receiving two yellow cards.

Plymouth will assess defender Scott Wootton and striker Freddie Ladapo in training on Christmas Day. Wootton has just returned from a three-month absence due to injury and Ladapo limped off in the defeat to Accrington at the weekend. Midfielder Jamie Ness is definitely ruled out.

Plymouth won 1-0 at Home Park, the last time the two sides met back in early October. Overall since we returned to the Football League the record between the two clubs is even, with the Dons and Plymouth having won six games apiece. We’ve also registered four draws with the Pilgrims.

Top scorers (in all competitions)

Our WDON team will be providing live coverage of the game from 3pm. This will be available by accessing our iFollow Dons channel. 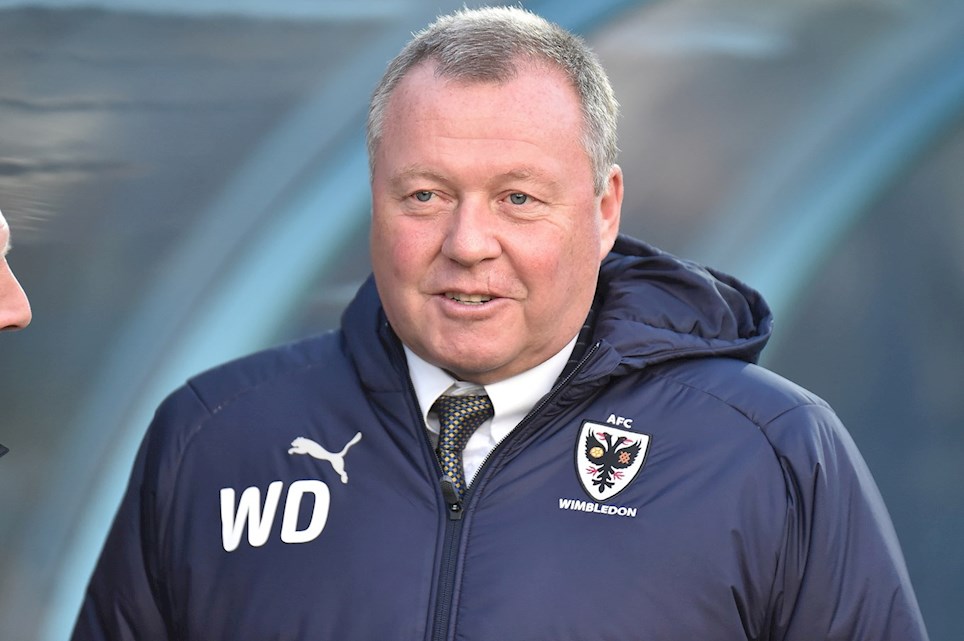 
Wimbledon will be aiming for back-to-back wins and a first home victory under new manager Wally Downes, when Plymouth Argyle are the visitors on Boxing Day. 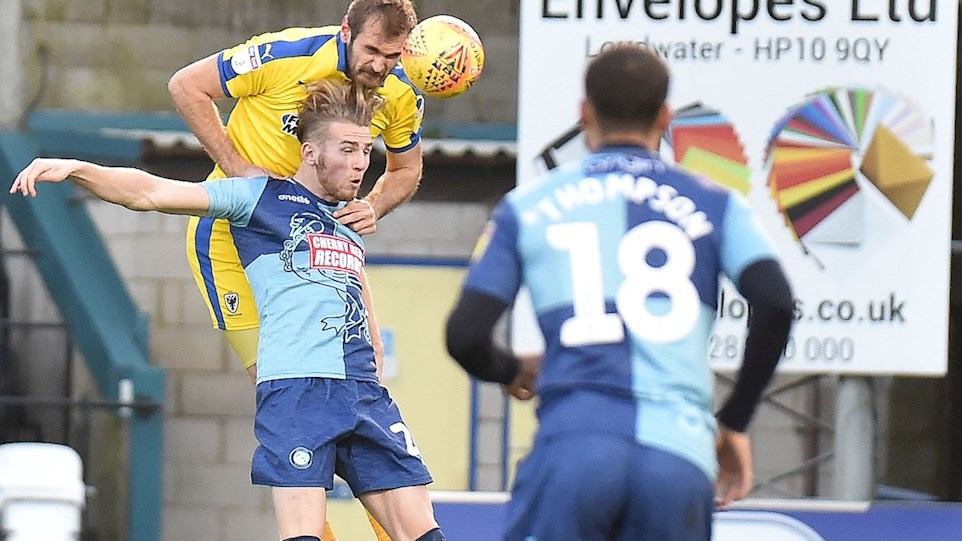 Boxing Day match to be screened live on iFollow

AFC Wimbledon came from behind to earn a deserved victory against Plymouth Argyle today.

It took until the 75th minute for Mitch Pinnock to net the decisive strike, but Wimbledon were full value for the 2-1 victory. Anthony Wordsworth (pictured above striking the equaliser) had earlier netted a goal of the season contender to cancel out an opener from David Fox. With the Dons having Blackpool at home to come up next, it could be a pivotal Christmas period for Wally Downes's side.

The manager made just one enforced change to his starting line-up after the victory at Wycombe Wanderers. Scott Wagstaff, who came off injured early on in that game, was replaced by Jake Jervis, who was aiming to build on his fine goal at Adams Park on Saturday. Jervis was one of two former Plymouth players in the Wimbledon starting line-up with Ben Purrington having also played for the South Devon club.

In a meeting of two sides scrapping for valuable points at the bottom of League One, Wimbledon started the brightest. A fine Dons move in the fifth minute threatened to break the deadlock when Anthony Hartigan showed good vision to pick out Jervis on the right and his cross was diverted into the path of James Hanson, but his shot was blocked. Plymouth started very cautiously, defending deep in their own half. They did have a first shot at goal in the 15th minute with Ryan Taylor trying his luck, but it was deflected wide. There was a half chance for Ryan Edwards from the subsequent corner, but his header was comfortably over the crossbar.

Plymouth took the lead in the 23rd minute with a goal out of nothing. Though the ball fell kindly for David Fox, he was at least 35 yards out, but his shot had so much power on it and Tom King’s out-stretched hand was just unable to reach it. There was a quick response from Wimbledon and Appiah struck a fine volley that was well saved by Plymouth keeper Matt Macey. Wally Downes was forced into a change shortly afterwards when James Hanson had to come off injured and that meant Mitch Pinnock was called into the action.

It had been a good reaction from Wimbledon to falling behind and the Dons equalised in the 32nd minute with a goal of real quality. Pouncing on a half cleared cross, there was still plenty to do when Anthony Wordsworth shaped up for a volley from 25 yards out, but it was an absolutely cracking first time effort that left Macey with no chance as it nestled in the bottom corner. It had been an exhibition in shooting prowess from distance so far and Jervis almost got in on the act with a lovely curler that just went wide. Before half-time it was almost 2-1 to Wimbledon when Appiah latched onto a through ball and tried his luck, but his well-struck shot was just over. Wimbledon also had strong penalty appeals for a challenge by Plymouth keeper Macey on Andy Barcham, but the referee was unimpressed.

Those in attendance had witnessed two goals of real quality in a first-half that was far from a tense struggle between two sides fighting for survival. On the balance of play, Wimbledon had created the better chances and perhaps should have gone in ahead at the break.

Wimbledon started the second-half with attacking intent and there was almost a second for the hosts 10 minutes after the break. Andy Barcham cut inside and tried his luck with a curler that was bound for the top corner, but Macey made a full-stretch finger-tip save. Though Antoni Sarcevic shot just over the crossbar at the other end, Wimbledon started to put more pressure on at around the hour mark.  A flurry of corners followed, but the Dons were unable to make the most of set-piece opportunities, as Plymouth defended resolutely.

With 20 minutes to go, Wally Downes provided Tyler Burey with another chance to impress, the 17-year-old replacing Jake Jervis. Tyler had certainly shown his attacking qualities as a substitute at Charlton recently and maybe he could offer a different kind of threat for Plymouth to deal with. However, Plymouth contributed to their own downfall with 15 minutes to go, as Wimbledon punished a defensive lapse. Last-man Yann Songo’o, who was just inside his own half, should really have dealt with a long ball forward, but he made a hash of it, and Pinnock took full advantage. Though he was in plenty of space, there was a lot for Pinnock still to do, but he powered clear, before scoring with a lovely lob that was expertly judged.

Though Wimbledon had to defend the lead, it was hardly backs-to-the-wall stuff. Substitute Burey almost made it three when he was put through by Pinnock, but his shot was saved by Macey. At the other end, Burey earned applause from the home faithful for tracking back and putting in an important challenge. That summed up the commitment from Wimbledon at both ends of the pitch and it was a fully deserved victory. Though Pinnock fired into the side netting late on, two was enough to earn a crucial win for the Dons.


Wimbledon will be aiming for back-to-back wins and a first home victory under new manager Wally Downes, when Plymouth Argyle are the visitors on Boxing Day.

Boxing Day match to be screened live on iFollow

Save a little room on Christmas Day for a Dons carvery on Boxing Day, before we take on Plymouth Argyle at home. We only have a few spaces left and you can reserve your place today for £30.

We will be serving a vegetarian option and we always try to accommodate all dietary requirements and allergies, so don’t hesitate to get in touch.

See you on Wednesday 26 December for a festive feast before the Dons take on Plymouth Argyle. 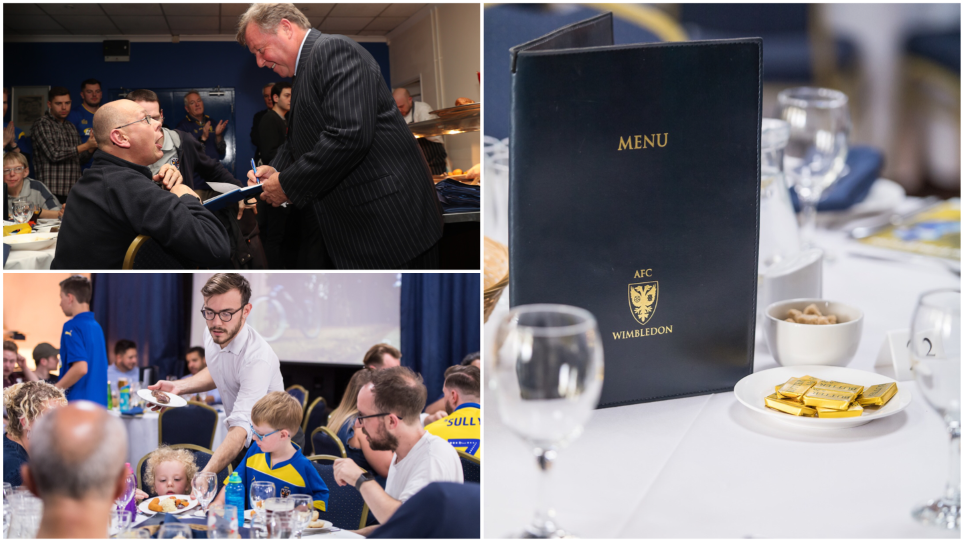 Let us take care of the cooking on Boxing Day


Three-course carvery and watching the Dons take on the Pilgrims…it's a winning combo! Please note hospitality match tickets are now sold out. However, there are still a few places left at our... 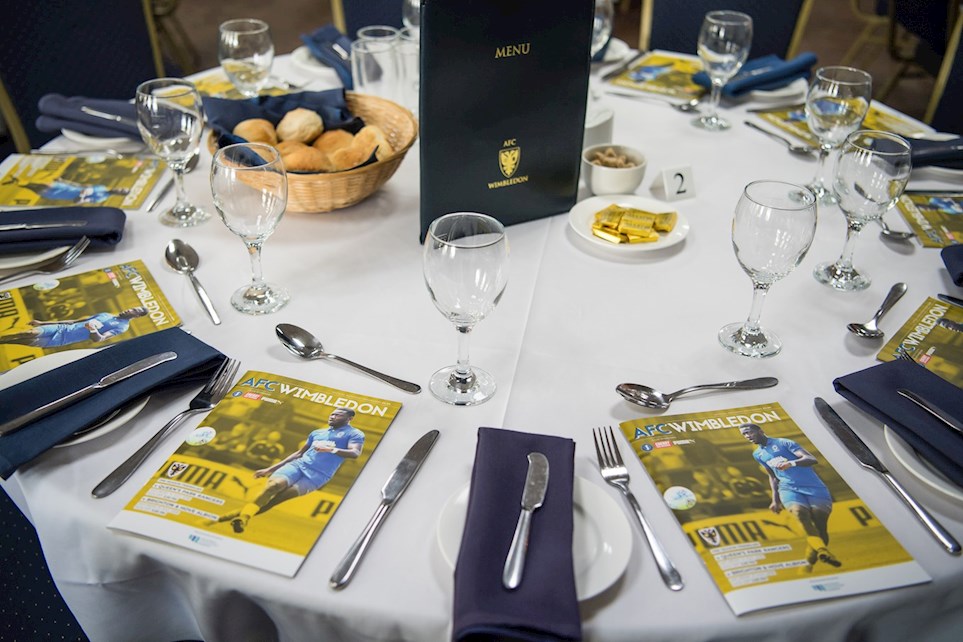 
Save a little room over Christmas for a beef and gammon carvery on Boxing Day, before we take on Plymouth Argyle at home. This is a popular date in all Dons' diaries, so we advise booking early!