Our Emirates FA Cup Fifth Round fixture at home to Millwall has been confirmed to take place on Saturday 16th February at 3.00 pm.

An early goal from Millwall’s Murray Wallace was enough to end AFC Wimbledon’s FA Cup dreams, but it was a proud day for the club.

Going out to Championship opposition with a slender 1-0 defeat was a gallant way to exit the competition at the last-16 stage.

Now, the focus for The Dons must turn to staying in League One with a trip to Rochdale up next on Tuesday.

It could all have been so different if Joe Pigott’s second minute effort had found the back of the net instead of bouncing off the woodwork.

Wally Downes made just one enforced change from the side that started the midweek win at Walsall with Tyler Garratt earning a recall due to Steve Seddon being cup tied. Having labelled that away win as the most complete performance since he took over, it was little surprise that our manager kept faith with the players that earned an important league victory.

Wimbledon came out of the blocks quickly and created a great chance inside two minutes. Shane McLoughlin was the architect of the opportunity when he showed good trickery to get in behind and his cross picked out Pigott, but his shot from close-range bounced back off the near post and away to safety. In an all-action start to this match, Wimbledon fell behind in the fifth minute when Ryan Leonard crossed from the right and Murray Wallace headed home emphatically. After conceding the early goal against Championship opposition, it was important that Wimbledon dug in to stay in this cup tie. Though Jed Wallace struck a shot off target, Wimbledon stayed strong at the back.

As we approached the midway point of the first-half, Wimbledon started to come into it again. Deji Oshilaja almost touched home a free-kick delivery from the left, but the flag was up for offside. Then Michael Folivi powered through the middle and created a good opportunity for himself, but he dragged his shot wide. The Dons were staying in this game by not allowing Millwall to settle on the ball. Pigott was proving to be a nuisance to the Millwall defence, winning free-kicks in good positions and holding the ball up well. A fine Dons move just after the half hour mark ended with Toby Sibbick’s cross picking out Oshilaja in the box, but he headed over the crossbar.

Wimbledon were certainly giving everything in this match and one marauding 30-yard run from young Sibbick summed up the effort, as he won a corner. Though an equaliser eluded Wimbledon in the first-half, it had been a good response to conceding the early goal and Wally’s boys were well in this game when the half-time whistle sounded.

Wally Downes decided to make a half-time change with Andy Barcham replacing Tyler Garratt and the Dons substitute was straight into the action. Taking a pass from Folivi, Barcham burst forward down the left with one of his trademark runs, but his cross was charged down for a corner. Wimbledon had made a good effort to push Millwall back at the start of the second-half, but the visitors maintained a good defensive shape and they were proving to be a tough nut to crack.

Though attacks were rare from Millwall in the second-half, Jake Cooper threatened to strike a second when he curled just wide from outside the box. The Dons made a double change in the 63rd minute with Dylan Connolly and Mitch Pinnock replacing Joe Pigott and Anthony Hartigan. That meant Wimbledon now had two wingers on the pitch with Barcham and Connolly aiming to make a difference on the flanks. Millwall also made a change shortly afterwards and it was a familiar face who entered the fray with former Dons forward Tom Elliott on as a substitute. Elliott received a nice ovation from the home faithful.

As we entered the latter stages of this match, Millwall sensed they could effectively seal a place in the next round and Ryan Leonard thought he had done it with a close-range header, but Aaron Ramsdale did really well to save his effort. Barcham also showed fine defensive skills to keep Wimbledon in it when he charged back to stop Millwall getting a one-on-one with Ramsdale. Though Wimbledon pressed forward in the closing stages, the equaliser just wouldn’t come. Wordsworth headed over and then volleyed off target. It had been a fine effort from Wimbledon in pushing higher level opposition all the way, but an impressive cup run was over and now The Dons must focus on attempting to stay in League One.


Our Emirates FA Cup Fifth Round fixture at home to Millwall has been confirmed to take place on Saturday 16th February at 3.00 pm.

Dons ticket holders seeking to upgrade one of their tickets before Saturday's sold out FA Cup game, please get in contact before 5.00 pm Friday 15 February.

Please email info@afcwimbledon.ltd.uk before 5.00 pm this Friday 15 February, including your name and contact number.

For example, an upgrade would cover changing from a Child ticket you have purchased to an Adult ticket.

Please note we are also operating a general Millwall waiting list for tickets. Email info@afcwimbledon.ltd.uk with your name and contact number in case we receive any returns or cancelations. 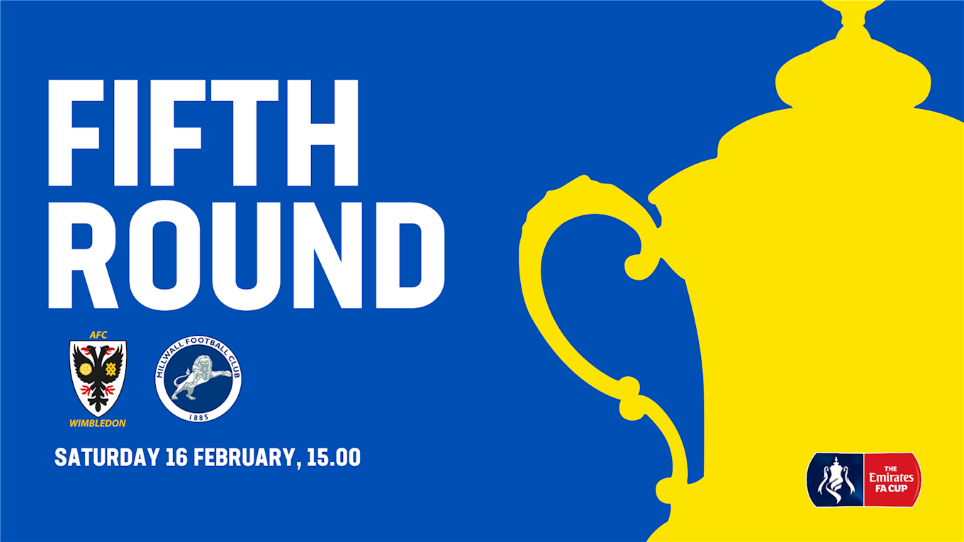 
For all Wimbledon fans who have bought multiple tickets for our sold out Emirates FA Cup 5th Round game against Millwall this Saturday. 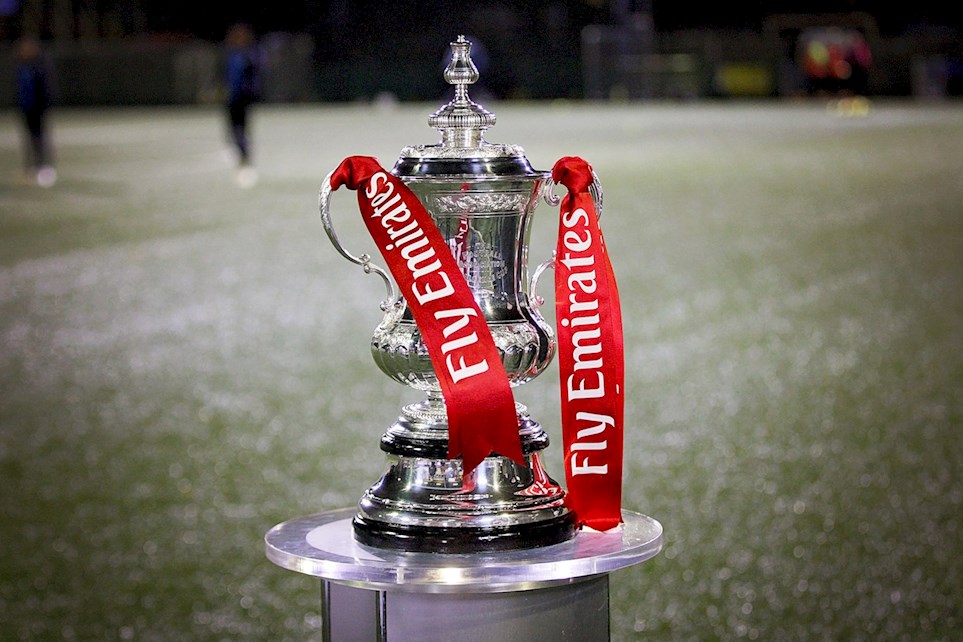 
Our Emirates FA Cup 5th round tie at home to Millwall this Saturday is now sold out! 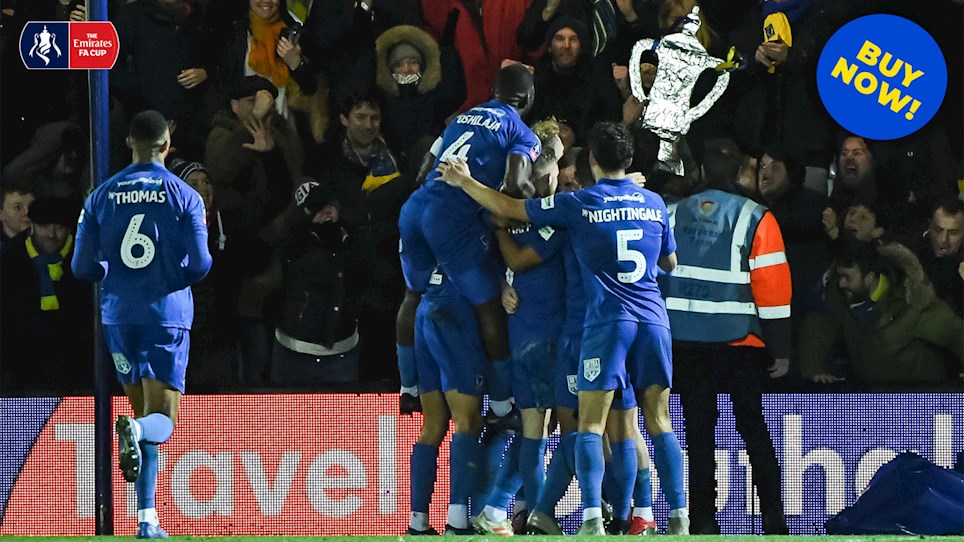 FA Cup: Snap up your ticket for Millwall


Subject to demand, fans with a previous online purchase history, can now buy up to three tickets per person for our FA Cup tie against Millwall this Saturday.