Glyn Hodges has called for the players to stand up and show the same battling qualities tonight that helped earn all three points at Walsall last Tuesday.

The Dons will be vying for vital League One points at Rochdale tonight and it promises to be a close tussle after a 1-1 draw in the corresponding fixture, a match that was Wally Downes’s first match as Wimbledon manager. Last season’s visit to Rochdale also ended in the same score-line with Wimbledon securing a vital point on the road to survival.

Rochdale have struggled to put wins on the board at home recently, but they did earn a 1-0 win at Walsall on 2 February.

Below are quotes from both camps, stats, team news, and a recap of the previous meeting between the two teams.

“We need to get some consistency. We’ve hit the highs and had the lows. You can see the difference in performances from Fleetwood to West Ham, so we’ve fluctuated a little bit. We have to be a bit more consistent in our performances. If we can get that then it builds confidence and it doesn’t matter who we play, because we have the players to win football matches.

“We are delighted with the way that the boys performed in the fifth round of the cup, but it was an opportunity missed. If you look at the performance against West Ham, and the calibre of their team, no disrespect to Millwall, but it was an opportunity for us. I don’t want to dwell on the negatives though. The positives were that the boys enjoyed it, they knocked the ball about well, and at times I felt we looked like the better footballing team.

“What is good is that Walsall will still be fresh in their minds. It will be similar to going to Walsall, we can expect the same kind of game. It’s a battle, the pressure is on, and we need back-to-back wins in the league, which we haven’t done for a while. We know what to expect and we will be fully prepared.

“We can see that scoring is where we’ve been lacking. They haven’t got to come from a centre forward, it can be goals from anywhere. We are doing a lot of work on set pieces. The centre halves come up and we try to get bodies into the box. Sometimes it just needs something to drop, a little ricochet maybe, for it to go in. We are not bothered where the goals comes from, we obviously do need them."

“I watched AFC Wimbledon’s game against Walsall on Tuesday evening, and it just shows you the pressures that football brings.

“It was brilliant to be sat in the stands, listening, watching and observing, looking at how people respond to pressure, and it’s not always good.

“There’s this common idea that if you’re bottom of the league then teams should be beating them, which I think AFC Wimbledon used to their advantage against Walsall. The FA Cup experience has galvanized them under a new management and they had a spring in their step going into the weekend’s fixture against Millwall. I was impressed with what I saw on Tuesday night.

“We’re trying to sustain our League One status and Tuesday night is another opportunity for my group of players. We’ve got seven at home and seven away now and we’ve got to make sure our home form improves. Last Saturday against Coventry, we seemed to be a little bit reluctant and I wasn’t really expecting that, because away from home I think we’ve stepped on, looked appetising and had no fear.

“We’ve got to make sure we express ourselves at home so that those results come, and it’s important that we share some of our away performances and what we’re doing on the training pitch with our supporters, so that they believe that we are good enough as well, because generally we are good enough to stay up.”

Tonight’s match will come too soon for James Hanson and Kwesi Appiah, though both are making progress after injuries. Steve Seddon returns after being cup tied for the Millwall game. Dylan Connolly and Deji Oshilaja are both doubtful.

For Rochdale, goalkeeper Andy Lonergan has had his emergency loan deal with Rochdale renewed for another seven days, due to Josh Lillis’ injury.

Calvin Andrew put Rochdale ahead in the 35th minute, but Andy Barcham struck a fine equaliser with 20 minutes to go, and that secured a point for Wimbledon in the first match as manager for Wally Downes. Take a look at the highlights from that game below.

Form Guide (last six in all competition, starting with most recent)

Tonight's match is available to watch for both domestic and overseas subscribers on a live stream via iFollow. You can get access by purchasing a match pass from our iFollow channel. 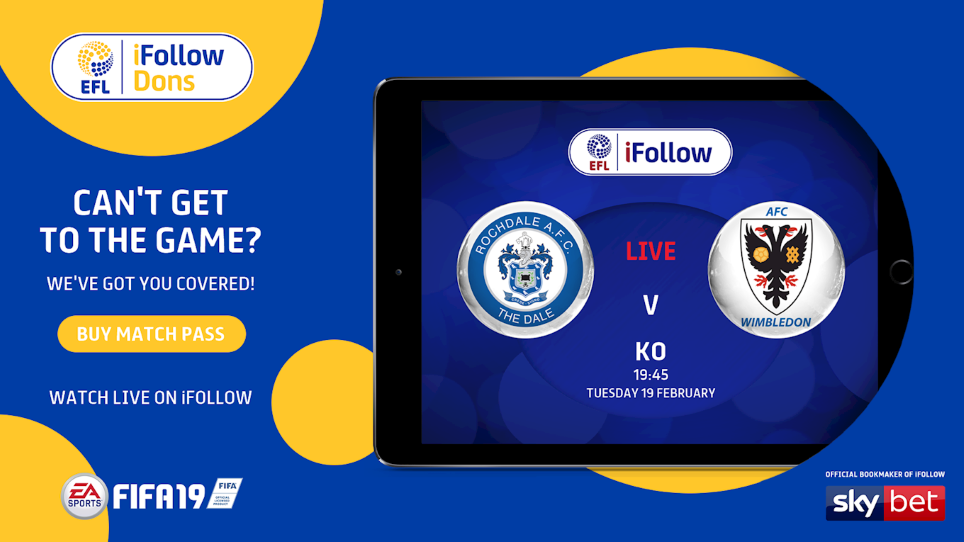 
Tonight's away match at Rochdale will be streamed live to domestic subscribers on iFollow.

We received enough interest to run a small supporters’ coach to Rochdale tomorrow. This is now fully booked.

Please note we will not be taking any more bookings. All those that registered an interest last week will be contacted by the ticket office today to take payment for the coach trip.

We are running a waiting list should any fans that registered their interest can no longer attend this match. Please email info@afcwimbledon.ltd.uk with the subject line "Rochdale Coach Waiting List".

The coach will leave from opposite South Wimbledon tube station at 12.00 (noon) and from the Cherry Red Records Stadium at 12.30 pm.

For further information about match tickets (pay on the day only) and an advanced hospitality deal open to away supporters, please click here.

Safe travels to all Dons making the trip up to Rochdale. 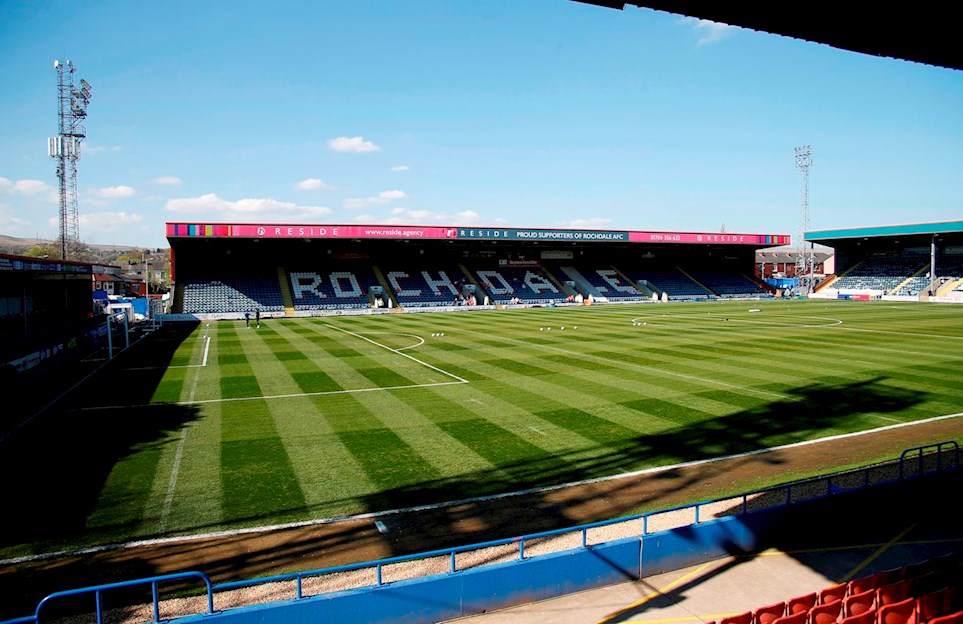 
Tickets for our re-scheduled league match on Tuesday 19 February (7.45 pm kick-off) at Rochdale will not be sold in advance. Fans can purchase tickets, cash only, on the night.