Glyn Hodges has called on Wimbledon’s players to produce a positive reaction after Saturday’s disappointing display against Burton Albion.

Dons supporters will have special memories of Walsall after last season’s memorable 3-2 win at the venue, a victory that turned out to be vital in the battle to beat the drop. Joe Pigott (pictured in action versus Walsall) started the fightback on that occasion and another goal from him would be most welcome tonight!

Wimbledon will be seeking a first league win in 2019, but Walsall have also struggled to put points on the board recently after losing their last three. Below are quotes from both managers, plus team news, stats, and a recap of previous battles.

“First of all, it’s an opportunity to put that performance (on Saturday) to bed. Sometimes you have to wait a week and it’s hanging over you, but we’ve sat down with the players and we’ve watched the video from Saturday back. We’ve gone through bits and pieces and now it’s gone. Now it’s another challenge, another game, and it’s just about making sure everyone has recovered for Tuesday’s match.

“We have three games in a week, so it’s about who is robust enough to cope and how they recover. It’s just about recovery and preparing for the games. Hopefully, we will be talking about positive results after these games. We know that Walsall got beaten at the weekend, but the manager has quite a big pool of players to choose from. With the run that they’ve been on and being at home against a team bottom of the table, they will be going for the win.

“Our players owe the fans a performance, but they also owe it to themselves. People are scratching their heads after the FA Cup performances compared to the league performances, but it’s the same lads. They owe themselves a performance first and foremost and if they go about their business like we know they can, there will be no problems.”

“It’s the biggest game of the season. Your next game is always the biggest one but this is massive for us. It’s one win in 11 for us but they aren’t in great form either. They have done well in the FA Cup. We have to make sure we impose ourselves on them in the game.

“It’s going to be a difficult game. They are going to come and they are going to work hard. They will get in our face and we have to stand up to that. It might be scruffy but what it has to be is effective. What we have to do as a football club is go out, get some points and steady the ship.

“Wimbledon will be disappointed with their form in the league, but when you watch them in the FA Cup they have been outstanding. Whatever their position is, we have to go and make the game about us. That is no disrespect to them. We have to make the game about us and every player that goes out there on Tuesday night has to give everything. In the first two minutes we need an atmosphere that is positive and together. We need to steady the ship and we have to make sure we get a positive result.”

Terell Thomas has shaken off the groin injury suffered against Burton in time to make the squad, but tonight’s match will come too soon for James Hanson to return. Kwesi Appiah (hamstring) is doubtful. For Walsall, George Dobson is a doubt after limping off in the defeat against Blackpool. Kory Roberts (broken leg) and Adam Chambers (foot) are definitely still out.

Form guide (last six in all competitions, starting with most recent)

The Dons suffered a home defeat in the corresponding fixture with Kwesi Appiah’s goal coming too late to make any difference to the outcome. Kieron Morris had earlier put Walsall 1-0 up, before a Will Nightingale own goal and a strike from Andy Cook put the visitors firmly in control.

Wimbledon secured a dramatic victory that proved to be crucial in surviving relegation. First-half goals from Jack Fitzwater and Julien Ngoy put Walsall 2-0 up at the break, but The Dons bounced back superbly. Joe Pigott reduced the deficit after a Lyle Taylor penalty had been saved, before Taylor’s cracking volley restored parity. However, that was far from the end of the story with Dean Parrett striking a penalty home in the sixth minute of injury-time.

Click on the link below to watch the highlights from that match.

Wimbledon supporters can pay on the night (cash only). Dons fans will be accommodated in the covered away stand, which is accessed via turnstiles 21–28.

For more about visiting Walsall, refer to the host club’s page on their website all about the matchday experience.

Tonight's match is available to watch on a live stream via iFollow. You can get access by purchasing a match pass from our iFollow channel. 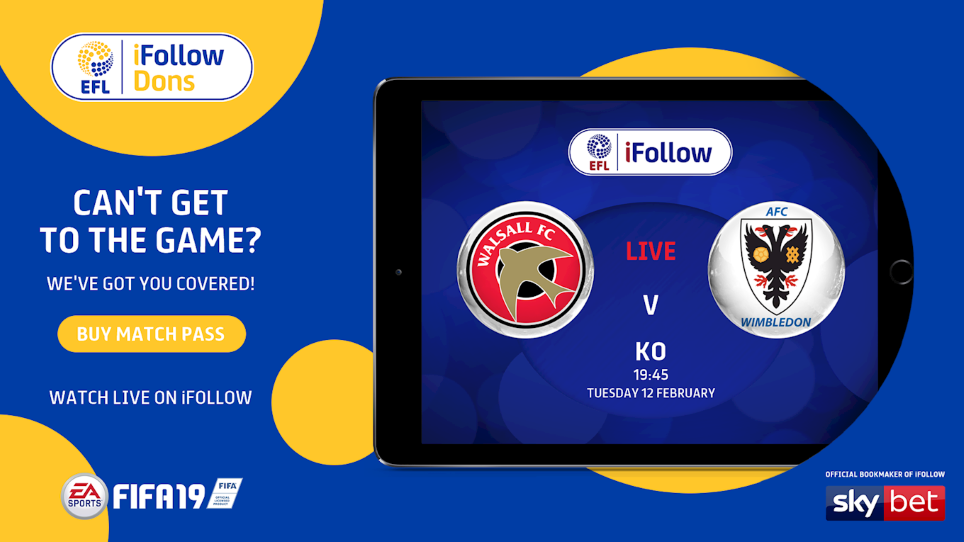 
Tonight's away match at Walsall will be streamed live to domestic subscribers on iFollow.

AFC Wimbledon earned a fully deserved victory at Walsall tonight with Steve Seddon’s first goal for the club proving to be decisive.

The on-loan left-back was in the right place at the right time to secure a 1-0 win that could breathe new life into Wimbledon’s League One survival hopes. It was reward for the 163 travelling Dons that made the trip on a Tuesday night and hopefully Wimbledon can now build on this long-awaited league win.

Following the disappointing performance against Burton, Wally Downes made wholesale changes for this match at Walsall. Only five players were retained from Saturday’s starting line-up and the manager decided to hand full debuts to Shane McLoughlin and Michael Folivi. The Dons started with three centre-backs with Will Nightingale in his more familiar position, joined at the heart of defence by Deji Oshilaja and Rod McDonald. Toby Sibbick and Steve Seddon were deployed as full-backs with responsibility for pushing down the flanks at opportune moments.

Wimbledon made a start that was full of positivity and Walsall goalkeeper Liam Roberts was forced into a save after just five minutes. Anthony Wordsworth almost caught Roberts off guard with an opportunist free-kick from 25 yards that the keeper just managed to get across his goal and save. Folivi looked bright early on, showing plenty of pace and a willingness to run in behind. On one occasion the on-loan Watford forward showed good speed down the left, and only a last-gasp challenge stopped him going clean through.

With 22 minutes gone, Wimbledon had a good chance to make the breakthrough. Folivi produced a sharp turn to create the chance for himself, but his shot was well saved by Roberts, who showed superb reactions to deny Wimbledon. Wordsworth struck the follow-up wide. The Dons almost paid for those missed opportunities as Walsall came close at the other end. A free-kick was clipped into the box and Jon Guthrie was allowed to get a header in, but it flashed just wide. That was a rare Walsall attack in a first-half when Wimbledon enjoyed most of the possession.

As we approached half-time, Walsall came into it a bit more and Josh Gordon’s cross picked out Aramide Oteh in the box, but he was unable to get a proper connection on his effort and Wimbledon survived. Ramsdale was forced into his first save on the stroke of half-time when he reacted well to stop a shot by Guthrie. Though Walsall had come into it in the build-up to half-time, the score could have been even more favourable from a Wimbledon perspective.

Wimbledon really seized the initiative at the start of the second-half and Deji Oshilaja had an effort cleared off the line by Josh Gordon. Though Walsall then survived a succession of corners, there was no reprieve for the hosts in the 48th minute. A quick Wimbledon move ended with Wordsworth denied by Roberts, but Steve Seddon followed up to notch his first Wimbledon goal.

Far from settling for a 1-0 lead, Wimbledon pushed on and created great chances to double the advantage. Midfield possession was well established by a commanding midfield display from Anthony Hartigan, who grabbed his opportunity back in the team with both hands. Chances followed and it was so nearly two when Seddon’s wonderful pass picked out Joe Pigott, but his shot bounced off a post and away to safety. Pigott had another opportunity inside the box, but his well-struck shot was saved by Roberts. With Walsall starting to look dangerous in search of an equaliser, Wally Downes decided to make a change, bringing on fresh legs up front with Mitch Pinnock replacing Pigott up front in the 66th minute.

Though Walsall started to exert a bit more pressure, Wimbledon stayed strong in defence, showing a resilience that had been lacking on the road this season. Ramsdale had to react well to deny Matt Jarvis an equaliser, but chances were few and far between for the hosts.

Not just for his goal, but Seddon was Wimbledon’s stand-out performer, showing admirable energy down the left. The full-back’s commitment to the cause was summed up when he charged forward to close Walsall keeper Roberts down and he was fortunate that his clearance bounced off Seddon and away to safety. Wimbledon defended doggedly in the latter stages to earn victory and just maybe this could be the start of a real fight to stay in League One.


Tonight's away match at Walsall will be streamed live to domestic subscribers on iFollow.

AFC Wimbledon supporters can buy in advance or on the day for Tuesday night's away match at Walsall.

The Dons triumphed 3-2 at Walsall last season and Wally's boys will be aiming for a similar outcome this time around.

Wimbledon supporters can buy in advance from our online ticket shop until 11.00 am on Tuesday morning. This match is not all-ticket and you can pay on the night (cash only). Places on the supporters' coach are still available (see details at bottom of this page).

Dons fans will be accommodated in the covered away stand, which is accessed via turnstiles 21–28.

Ticket prices (increase by £2 on the night) are as follows:

Family tickets can only be purchased directly from Walsall's ticket office by contacting 01922 651 416 during office hours (9.15 am until 4.30 pm). Please note that family tickets only apply to parents/grandparents and their junior.

The supporters’ coach will leave from opposite South Wimbledon tube station at 2.00 pm and from the Cherry Red Records Stadium at 2.30 pm. The price is £22, and seats on the coach can be reserved by contacting the club office on 020 8547 3528 during normal office hours.

For a complete guide to the match day experience at Walsall, please visit the club website.