AFC Wimbledon do battle with The Cod Army once again tonight and Wally Downes has stressed the importance of this match during a big week for the club.

Though Wimbledon have a plum FA Cup fourth round tie at home to West Ham coming up on Saturday, the need for League One points perhaps assumes greater significance with just 18 matches to go this season.

Of course, The Dons have been involved in key matches against Fleetwood over the years, starting back in non league days when the two clubs were vying for promotion into the Football League. Back in 2011, Wimbledon brushed Fleetwood aside in the play-off semi-final and two years later came that dramatic ‘Survival Saturday’ with a dramatic final-day win securing survival in the Football League.

Fleetwood won on their last visit to the Cherry Red Records Stadium, a 1-0 victory last March, but Wimbledon have won the last two meetings between the two clubs.

Below are quotes from both managers, stats, and a recap of previous matches.

“In the long-term this game is more important. Getting points from teams around us, although Fleetwood are higher than us, is critical. Two out of our last three league games have been against top teams and we fell short, but we need to make sure at home that we turn it into a fortress now and start picking up maximum points. That’s from now right the way through until the end of the season.

“Fleetwood pass the ball around very well. They are neat and tidy, very inventive from set-pieces, and they will be looking for revenge.”

“We knew last time out against them we were miles the better side, but we lost the game. This time we just need to make sure we are switched on because we are obviously hurting after the FA Cup game.

“Tuesday is a chance for us to win a game of football and is another opportunity for us to reach the level of performance we produced in the first half."

The Dons marched into a 2-0 lead before the hour, thanks to goals from Andy Barcham and Anthony Hartigan, but Paddy Madden and Ched Evans both scored to level it up. However, that was far from the end of the story as Kwesi Appiah struck a cracking goal in the 90th minute to send Wimbledon into the fourth round of the Emirates FA Cup.

Wimbledon produced a resolute display on the road at Highbury Stadium. Joe Pigott scrambled home the only goal of the game with 60 minutes on the clock to earn a perfect start to the 2018/19 season.

In the corresponding fixture at the Cherry Red Records Stadium last season, Fleetwood just about edged it. Jack Sowerby's first-half strike was the difference in a match played in farcical conditions. On a rain sodden pitch, the referee even ordered the rollers on during the second-half, but the match was allowed to go on and Fleetwood earned a vital three points in the battle to stay up. However, Wimbledon also went onto secure League One status at the end of the season.

And a nice memory from further back!!

On an emotional day at the Cherry Red Records Stadium, Jack Midson’s penalty meant that AFC Wimbledon stayed in the Football League. The 2-1 victory on 27 April 2013 was achieved on a tense final-day of the 2012/13 season. Gary Alexander had opened the scoring, but that was cancelled out by Andy Mangan, before Midson kept his cool from 12 yards when Wimbledon really needed him to. Take a look below at the celebrations that followed!

Terrace tickets for the Chemflow End and the RyGas terrace are also still remaining. Buy in advance from our online ticket shop until 3.45 pm this afternoon and you can collect from the complimentary tickets window before the game. Tickets will be available to pay on the night.

Domestic subscribers can tune into our iFollow channel for commentary of tonight’s game with Mikey T and Rob Cornell taking you through the action. Overseas subscribers can watch a live stream of the game on the same channel.

A double from Ched Evans and a goal from substitute Ashley Hunter earned a 3-0 win for Fleetwood with Wimbledon having struggled to create anything of real note in the game. Indeed, the urgency and passion shown in two victories for Wimbledon before Christmas – at Wycombe and at home to Plymouth – was sorely lacking.

Wally Downes made just one change from the side that started against Barnsley on Saturday. Steve Seddon missed out due to a hamstring injury and that meant a recall for Anthony Hartigan. Deji Oshilaja switched back from midfield into defence to fill the left-back spot. The Dons came into this match seeking a first league victory this year after two defeats in three games, though both of those losses came against promotion contenders Portsmouth and Barnsley.

With sleet and rain in the build-up to this game, it was a slippery surface for the two sets of players to deal with and both sides struggled to build up attacking momentum early on. Wimbledon’s first effort came in the 11th minute when Anthony Hartigan’s well delivered corner picked out Paul Kalambayi, but his header was over. Fleetwood scored from their first meaningful effort in the 18th minute when a superb strike from Ross Wallace bounced off a post and fell nicely for Ched Evans, who made no mistake from close range.

The only real attacking threat early on from Wimbledon came through Andy Barcham’s runs down the left, but Fleetwood were able to get enough men back to deal with him. The night got worse for Wimbledon on the half hour when James Wallace and Wes Burns combined to find Madden in space in the box. Though his effort was well saved by Aaron Ramsdale, Evans followed up to notch his second of the night. Wimbledon attempted to respond and there was a first shot at goal when Joe Pigott tried his luck from outside the box, but Fleetwood keeper Alex Cairns saved it fairly comfortably. The Dons were fortunate not to go 3-0 down just before half-time. A long throw-in from Mitch Pinnock was cleared and a quick break ended with Burns picking out Ashley Nadesan, but he was denied by Ramsdale.

The half-time whistle shrilled with Wimbledon 2-0 down and plenty more urgency and tempo was required if there was to be any chance of getting back into it. Fleetwood had dominated possession, playing an expansive style through midfield, and Wimbledon had not been able to get on the ball enough to exert any pressure.

Fleetwood had a great chance to make it 3-0 in the 50th minute when Evans found space in the area and turned well, but his shot was too close to Ramsdale. The Dons keeper then made a brilliant finger-tip save to deny Evans his hat-trick once again. With Wimbledon struggling to make any impression as an attacking force, Wally Downes made a double change in the 57th minute. Dylan Connolly and Anthony Wordsworth were introduced for Jake Jervis and Andy Barcham.

Connolly was straight into the thick of the action and he produced a lovely run down the right before putting over a fine cross, but no one was able to get on the end of it. A quick break almost resulted in a third for Fleetwood when Madden was found in the space on the left, but he missed the chance to play in Evans, who was waiting in the box, and his subsequent shot was gathered by Ramsdale. Though Fleetwood were now restricted to hitting on the break, Wimbledon failed to create any meaningful chances against a side offering stubborn resistance.

The match was effectively ended as a contest eight minutes from time when Wimbledon failed to defend a corner and though the initial header from Evans was saved by Ramsdale, Fleetwood substitute Ashley Hunter nodded home. That was game over and Wimbledon will need to lift the performance levels considerably to cause any problems for Premier League West Ham in the Emirates FA Cup on Saturday night.

AFC Wimbledon take on Fleetwood Town tonight (7.45 pm kick-off) in a first game under the lights this year at the Cherry Red Records Stadium and tickets are available for you to cheer on The Dons.

Your support will be appreciated, as Wally’s boys go in pursuit of a third victory this season against Fleetwood and vital points in the battle for League One survival. The picture above shows Anthony Hartigan receiving congratulations from Glyn Hodges after the FA Cup win at Fleetwood.

Below is a summary of ticket availability and other match details ahead of tonight’s game.

Terrace tickets for the Chemflow End and the RyGas terrace are also still remaining. Buy in advance from our online ticket shop until 3.45 pm this afternoon and you can collect from the complimentary tickets window before the game. Tickets will be available to pay on the night.

These will be open from 5.00 pm tonight noon with a wide selection of drinks, including real ales, available to buy.

The Wimbledon Brewery pop-up bar will be well stocked in the main bar with Wimbledon Pale Ale, Wimbledon Gold lager and bottled soft drinks available to purchase. The Your Golf Travel Bar (main bar) will also be open as usual, selling drinks including Plough Lane Ale, Gallows Gold and XXK.

The back bar will also be open with a wide selection of drinks available, including Plough Lane, Wimbledon Common, and Wimbledon Pale Ale. Hot mulled cider will also be on sale in the bars at £3 a cup.

We will be pleased to welcome Fleetwood supporters into the bar areas before the game.

Tonight’s offering is packed with news, features and exclusive interviews. Terell Thomas is the subject of our main player interview and our fit-again defender has a rather unusual match day ritual! Terell also talks extensively about his long path to Wimbledon, which has involved proving himself in non league. Captain Deji Oshilaja is also interviewed for tonight’s edition.

Dons Trust Chair Mark Davis and newly elected DTB member Luke MacKenzie will be at the kiosk for tonight’s game. DT members and people interested in the work of the Trust are welcome to talk to them before the match. You can also join the Trust or renew your membership at the kiosk, sign up to the Dons Draw (our regular monthly lottery) or donate loose change, foreign currency or items for AFCbay (our online auction).

Tickets will be on sale for the away matches at Sunderland and Walsall. You can buy these from the complimentary tickets window before the match and for a short time afterwards. Please note that we will not be selling tickets for the Emirates FA Cup game against West Ham. 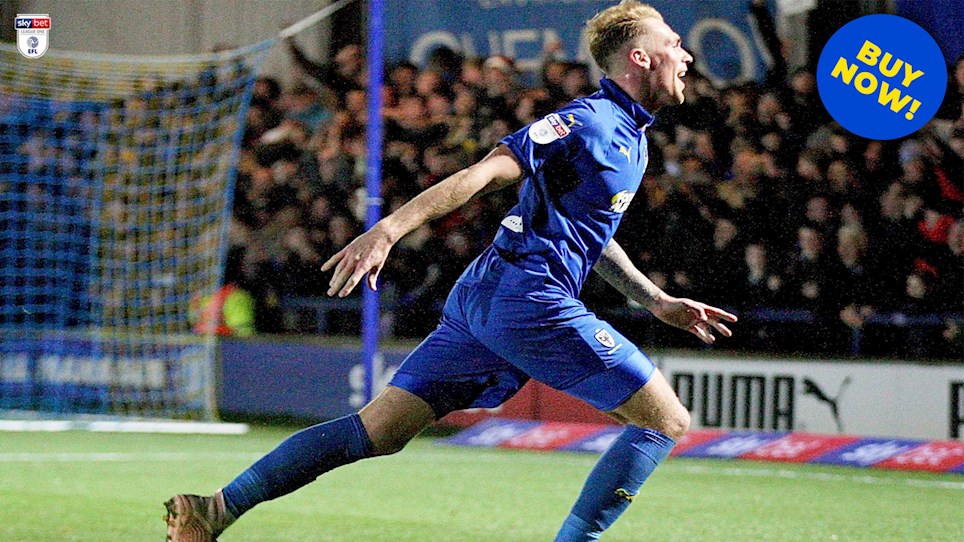 Snap up your Fleetwood tickets


Watch the Dons take on Fleetwood Town on Tuesday in our first evening game under the lights of 2019. 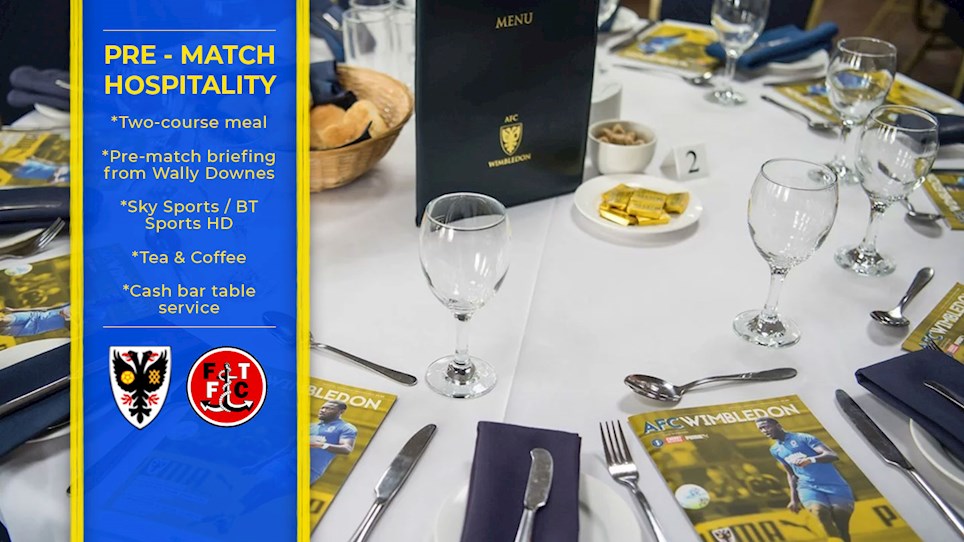 
Watch the Dons take on Fleetwood Town (Tuesday 22 January) in style and treat yourself to a pre-match meal and hospitality experience before the game.


Watch the Dons take on Fleetwood Town under the lights on Tuesday 22 January.