Wally Downes has confirmed that Rod McDonald and Kwesi Appiah are both in contention to face West Ham United on Saturday.

Rod (pictured) has shrugged off an ankle injury and Kwesi is also fit after putting a hamstring injury behind him.

Wally said: “Rod was back in full training yesterday. I think there is only really James Hanson who is out injured. I’ve pretty much got a full squad to choose from. Kwesi trained yesterday and he could play a part on Saturday."

Anthony Hartigan misses tomorrow’s game due to suspension. The midfielder serves a one-match ban in the Emirates FA Cup after picking up two bookings in the competition so far. Steve Seddon is back in light training after his hamstring injury, but he is cup tied anyway for this match.

Following the disappointment of Tuesday’s league defeat against Fleetwood, Wally is demanding a completely different performance from his players, as Wimbledon seek to cause an FA Cup shock.

“It was the first time we had let ourselves down since I’d been here and they have the opportunity now to go out and put that behind them,” said Wally. “If there’s anything close to that performance against a Premier League club then it’s going to be a very long 90 minutes and not the sort of day that we want the fans to enjoy when you get a Premier League club. It’s happened before this season and the boys gave a good account of themselves. We certainly need to blow the cobwebs away from the other night and perform properly on Saturday.”

Look out a bit later for a full iFollow interview with Wally. 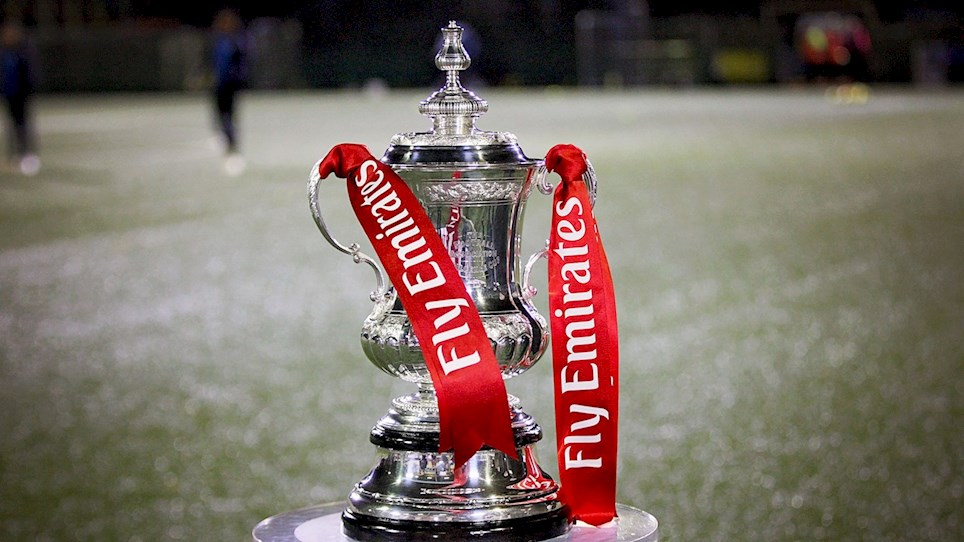 
Wimbledon will be aiming to create more FA Cup history against West Ham on Saturday at the Cherry Red Records Stadium. 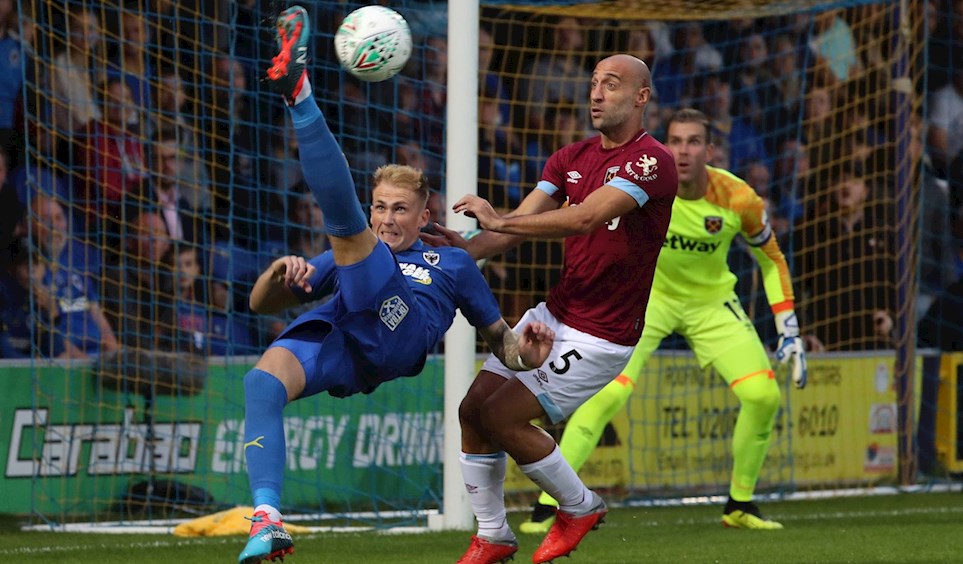 
Ticket details for our FA Cup 4th round tie against West Ham United on Saturday 26 January 2019 (kick-off 7.45 pm), which will be shown live on BT Sport, have been announced.

A double from Scott Wagstaff and goals from Kwesi Appiah and Toby Sibbick earned a 4-2 victory for The Dons.

What a night for everyone connected with AFC Wimbledon, as Wally Downes's men deservedly secured a place in the fifth round of the Emirates FA Cup.

Wally Downes made five changes to his starting line-up after the midweek defeat against Fleetwood and it was definitely a more experienced side chosen to take on Premier League opposition. Rod McDonald and Kwesi Appiah earned instant recalls after recovering from injuries and Scott Wagstaff and Anthony Wordsworth also came back into the side. There was a significant inclusion on the right wing with Dylan Connolly handed his first start since joining from Dundalk. Joe Pigott and Jake Jervis both had to settle for places on the bench with Anthony Hartigan, Andy Barcham, and Paul Kalambayi missing out altogether due to a combination of suspension and injuries.

The Dons produced a start to this game that was in stark contrast to Tuesday night against Fleetwood. Full of tempo and energy, Wimbledon put their top-flight opponents under real pressure from the start. Speedy winger Connolly was at the heart of it and he showed what he was capable of with a blazing run down the right, before producing a cross that West Ham just managed to scramble clear. The first chance fell to Wimbledon in the sixth minute when Connolly picked out Terell Thomas in space in the area, but he fired over the crossbar. With Wimbledon’s supporters producing the best atmosphere heard at our stadium for some time, it felt like the cup upset could be on. The momentum continued and Pinnock fired in a free-kick that stung the palms of West Ham keeper Adrian.

Shell-shocked by Wimbledon’s early robustness, it wasn’t until the 13th minute that West Ham threatened as an attacking force. Andy Carroll rose highest in the box to meet a corner, but his header was over the crossbar. At the other end, Pinnock cut inside and tried a curler that was too high to trouble Adrian in the West Ham goal. Though the visitors fashioned a shooting opportunity when Carroll headed down for Javier Hernandez, the Mexican striker’s shot was well wide of the target. However, it was Wimbledon still having the better of it and a good chance followed when Connolly drove down the right flank and his cross picked out Pinnock, but his header was saved by Adrian.

It was no surprise when Wimbledon made the breakthrough in the 34th minute. Wordsworth’s well weighted pass provided Appiah with a shooting opportunity and his shot took a deflection to beat Adrian in the West Ham goal. There may have been a slice of fortune about Wimbledon’s opener, but the majority of people inside the Cherry Red Records Stadium didn’t care. There was no let-up from Wimbledon and the advantage was doubled in the 41st minute. A mistake just inside his own half by Pedro Obiang provided Wagstaff with an opportunity to run through on goal. He had no hesitation in accepting the invitation and powered through, before keeping his cool to beat Adrian with a low finish. That signalled ecstatic scenes from players, fans, and coaching staff, as Wimbledon sensed a famous victory was on the cards.

The 2-0 half-time score-line certainly hadn’t flattered Wimbledon and it could have been three as Thomas just failed to get enough contact on his shot after meeting a cross at the back post. Knowing they needed a dramatic turnaround, West Ham made three half-time changes with Felipe Anderson, Ryan Fredericks and Lucas Perez all entering the fray. However, just 41 seconds into the second-half and Wimbledon were celebrating a third goal. It was a lovely move and a fine finish that put The Dons 3-0 up. Pinnock picked out Wordsworth, who found Appiah and his cross was steered home expertly by Wagstaff.

Wimbledon were full value for the three-goal lead, but the lead was reduced in the 57th minute. Michail Antonio’s initial shot was saved by Aaron Ramsdale, but Perez pounced on the opportunity and cracked home emphatically. West Ham were transformed by that goal and shortly afterwards Perez shot just wide. Antonio came even closer when he cut inside from the right and struck a superb curler that just missed the far post. It was a completely different game now as the Premier League side poured forward at every opportunity. Wally Downes made his first change in the 64th minute and it was an attempt to bolster midfield with Tom Soares replacing Mitch Pinnock. The Hammers did reduce the arrears in the 72nd minute and it was an impressive goal too. Following a foul just outside the area by Will Nightingale, Anderson struck a brilliant free-kick that left Ramsdale with absolutely no chance.

Though West Ham drove forward, pressing Wimbledon back, the home side defended resiliently with Nightingale protecting a defence that had Oshilaja and Thomas in commanding form at the heart of it. Just when the atmosphere was getting really tense around the Cherry Red Records Stadium, The Dons earned the killer fourth goal. Wordsworth crossed superbly from the left wing and substitute Toby Sibbick headed home at the back post. That was effectively game over and what a night for AFC Wimbledon. Roll on the fifth round!


Wimbledon will be aiming to create more FA Cup history against West Ham on Saturday at the Cherry Red Records Stadium.


Ticket details for our FA Cup 4th round tie against West Ham United on Saturday 26 January 2019 (kick-off 7.45 pm), which will be shown live on BT Sport, have been announced.

AFC Wimbledon take on West Ham tonight in the Emirates FA Cup and we wish to remind supporters that this match is all-ticket.

Tickets went off sale earlier this afternoon for the match and supporters will not be able to pay on the night.

Please refer to our Match Details article for information about ticket collection.

Come On You Dons!