Wally Downes has promised supporters that AFC Wimbledon will be giving everything in pursuit of a landmark FA Cup win at Fleetwood on Saturday.

Victory at the Highbury Stadium would book Wimbledon's place in the fourth round for the first time since reformation back in 2002.

“You can’t say it’s just another game,” said Wally in his pre-match interview with our premium iFollow Dons subscription channel.  “It’s a match that’s come quickly after the Portsmouth game, where we played well, so the boys are looking forward to playing there. They’ll be looking to carry on with a performance like that, but change the result. If we change the result we’ll be in the hat on Saturday night, which is the most important thing.

“We’ll make sure we’ll put on a performance for any of our fans who come up there. We’ve certainly got to put in a performance, because the rewards are very high. The supporters may have wanted Tottenham or Arsenal in the draw, but there’s a great chance of getting them if we progress through this round. We’ll be playing at our maximum to get a result.

“I had Joey (Barton) as a player at QPR and he’s got some strong opinions on how he thinks the game should be played. It’s terrific that he’s taken his first step into management at Fleetwood. I am sure his aim is a lot higher. To cut your teeth and learn your trade at a lower league club shows a great mentality and I’m sure he’ll be successful, but hopefully not on Saturday!”

Wally provided a detailed injury update on the progress of some of the members of his squad, but this Saturday’s tie will come too soon for a few key players.

“Deji Oshilaja is very close,” said Wally. “Whether he is close enough, I don’t know. If Deji doesn’t make this game, then he’s definitely ready for next week. It’s touch and go. Joe Pigott is not ready yet. He’ll be another week or so.

“Rod McDonald has been out running all week. He’s fine and should be looking to comeback training with the squad in the middle part of next week. Tom Soares is a day-by-day thing. He tweaked his back last week in bed and it’ll be a couple of days before its okay again. He’s not ready yet.

“Egli Kaja (having returned from a loan spell with Livingston) is in the reckoning. We’ll decide on the final numbers today, but everyone has come in prepared to travel.”

Wally missed out on lifting the FA Cup as a player with Wimbledon back in 1988, having helped play a part in guiding the Dons from the old fourth to the first division during the 1980s. He’s well aware though of what the FA Cup means and his experiences of the competition certainly became more favourable after a day to forget against Enfield.

“The cup has special magic for everyone, but my memory is getting beaten at Enfield when we had a team of kids out,” said Wally. “We got beaten by a team of cab drivers, airport workers and solid amateur players. It was a good lesson for us. We had a lot of young players out there, we were a very young side and it was a case of men against boys. It taught us a lesson, that’s for sure!”

Watch Wally's full update ahead of Fleetwood by clicking on the link above.

A dramatic 90th minute winner from Kwesi Appiah secured AFC Wimbledon a place in the fourth round of the Emirates FA Cup for the first time since the club was reformed.

The Dons won it 3-2 with a superb strike from Appiah proving to be decisive after Fleetwood had come back from 2-0 down to level the score with 18 minutes left. It had appeared that Wimbledon had missed the chance to win it on the day, but Wally Downes’s men showed plenty of character to bounce back and earn victory.

Wally Downes made one just change to his starting line after the gallant defeat to League One leaders Portsmouth last time out. It was a significant one though with goalkeeper Aaron Ramsdale thrust straight in for his debut just one day after signing on loan from AFC Bournemouth. Nineteen-year-old Paul Kalambayi retained his place at the heart of defence after his impressive display on his league debut at Fratton Park.

Fleetwood had the better of the opening exchanges and Ramsdale was called into action in just the eighth minute when he reacted well to save Ashley Hunter’s shot. Kalambayi went into the referee’s book just two minutes later for a late tackle on Paddy Madden, the defender making the challenge to stop a Fleetwood break. The early pressure from the hosts continued and it needed fine defending from Tennai Watson to keep Wmbledon level when he twice blocked shots from Ched Evans.

After defending stoutly early on, Wimbledon marched into the lead with a goal of real quality. Mitch Pinnock’s throw-in was knocked back to him by Kwesi Appiah and his ball in was a lovely one as it picked out Andy Barcham in the box. There was still a lot of work to do for Barcham with his back to goal, but he turned smartly and struck a superb effort into the top corner. There was almost a chance to double the advantage shortly afterwards when Nightingale’s pass picked out Appiah, but he was caught offside.

As we approached the half hour mark, Fleetwood started to apply pressure. Hunter’s free-kick flashed just wide and then Craig Morgan headed against the crossbar, but the flag was up for offside. Fleetwood created a good chance to equalise in the 35th minute when a nice move ended with James Wallace finding Evans in the box and his shot was well struck, but Ramsdale did really well to save it and he reacted well to stop Hunter’s follow-up. With six minutes left of the first-half Fleetwood had their best chance so far when a good move ended with Evans finding Hunter just six yards out, but he shot over from close range.

The half-time whistle signalled a job well done from Wimbledon. Though attacking opportunities had been limited for the Dons, the defending had been good enough to limit Fleetwood to very little.

Fleetwood started the second-half full of attacking intent and Ramsdale was required to be alert to stop Wes Burns from halving the deficit. However, that was a rare second-half opening for Fleetwood as Wimbledon continued to defend resiliently and the advantage was doubled in style with 10 minutes of the second-half gone. A long ball picked out Appiah, who showed good awareness to hold the ball up and pick out Anthony Hartigan. The 18-year-old struck first time with a lovely effort that left Fleetwood keeper Alex Cairns with no chance.

At 2-0 up, Wimbledon appeared to have one foot in the fourth round, but Fleetwood kept on going and they halved the deficit in the 69th minute. A free-kick was swung in by Ross Wallace to pick out James Wallace and though his initial header was well saved by Ramsdale, Paddy Madden slotted home the rebound. It was a different game now and three minutes later it was 2-2. Ched Evans cut inside from the left wing and the referee adjudged that Tennai Watson’s challenge was worthy of a penalty. It appeared to be a harsh decision, but Fleetwood took full advantage with Evans striking home the equaliser from 12 yards.

Though Fleetwood pushed for a winner, Wimbledon’s players steadied the ship and then went in search of a decisive goal. Mitch Pinnock almost found the key to the door when he powered down the right flank, but his cross flashed across goal with no one able to get on the end of it. Anthony Wordsworth also had a shot charged down as Wimbledon sensed that a victory could still be secured. Fleetwood threatened to win it in the latter stages when Ramsdale saved at his near post from Evans, but the Dons were not to be denied. Appiah turned onto his left foot and struck a cracking effort from outside the area that found the bottom corner. The travelling Dons went absolutely crazy in the away end, celebrating wildly with the players. What a way to secure a place in the fourth round of the FA Cup!

AFC Wimbledon are back on the road again this Saturday with a trip to Fleetwood Town in the Emirates FA Cup and adult tickets are available for just £10.

Wimbledon will be bidding to reach the fourth round of the competition for the first time since reformation in 2002 and tickets are available to cheer on Wally Downes' men in pursuit of that target. You can also book a place on the supporters' coach (see details at the bottom of this page).

Advance tickets from our online shop are available up until 3.00 pm on Friday, but you can also pay on the day at Highbury Stadium.

Dons fans have a choice of being accommodated in the seated and covered Parkside Stand at the end of the main stand, which is accessed via Parkside turnstiles 1 and 2 (located next to the main club shop and ticket office on Park Avenue), or in the covered Percy Ronson Terrace behind the goal at the south end of the stadium (accessed via Away turnstiles 1 to 3 located at the junction of Hatfield Avenue and Highbury Avenue).

Seven wheelchair bays, located in the Parkside Stand, are available for visiting supporters. For both wheelchair users and ambulant disabled supporters, admission is charged at the relevant age rate, with a registered carer admitted free of charge. Contact 020 8547 3528 for information. 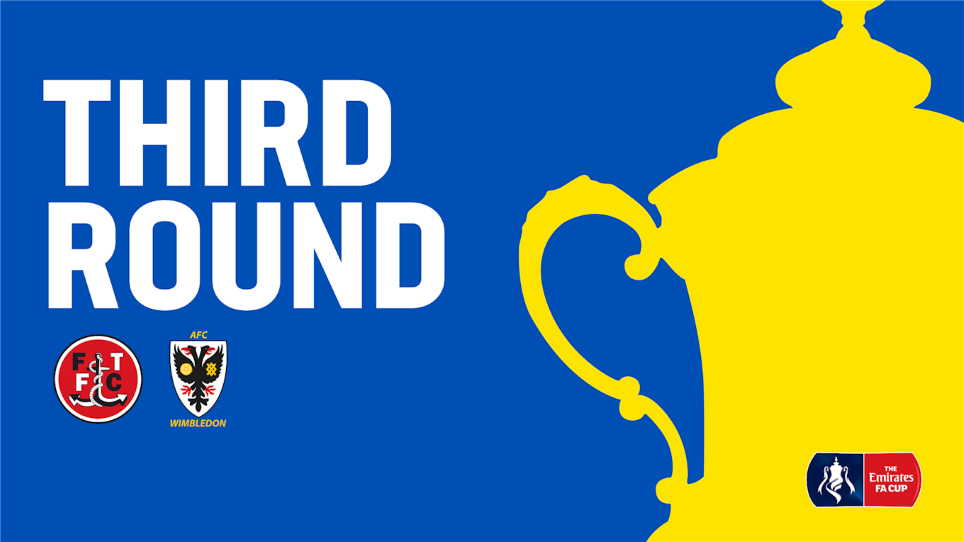 
Tickets are now on sale for AFC Wimbledon's third round match at Fleetwood Town in the Emirates FA Cup Third Round. 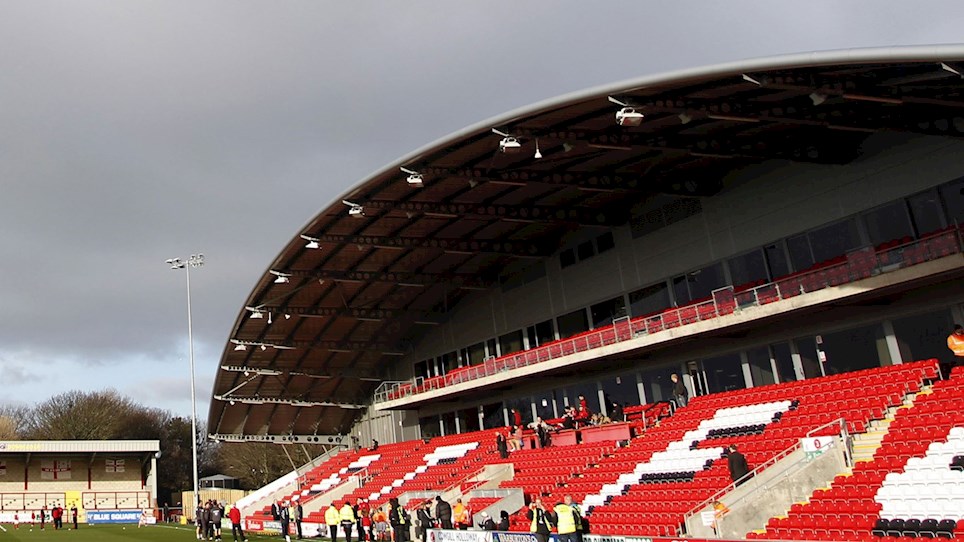 FA Cup: Date and ticket prices for Fleetwood away