Wally Downes says there can be no let-up in the push for League One survival, as AFC Wimbledon seek to build on a prolific spell of three successive victories.

The Dons host Gillingham on Saturday with Steve Lovell’s side currently occupying 16th place, but just five points above Wimbledon. Having drawn at league leaders Luton Town last time out, Gills are likely to be a tough nut to crack and the team will fully appreciate more of your great support in pursuit of another important victory. Wimbledon’s top scorer Joe Pigott will be aiming to add to his 13-goal return so far against his former club, who he scored the winner against in September.

Pigott could be one of several former Gills in the Wimbledon squad with Scott Wagstaff, Andy Barcham, and Deji Oshilaja having previously played for tomorrow’s opponents. Of course, our former captain Barry Fuller is sure to receive a warm welcome, as he returns to the Cherry Red Records Stadium for the first time since leaving last summer. Dean Parrett also made a vital contribution to keep Wimbledon up last season and he could also be in the Gillingham squad tomorrow.

Below are quotes from both managers, plus stats, and a recap of previous matches.

“Gillingham are going to be full of beans because they’ve come from behind twice recently. They scored late on the other day and when you come back like that it’s a big fillip for a club, it’s like a win. They will be coming here as a very determined side.

“We’ve had a good week, that’s basically what we’ve had. Now we have to make sure that we have another good six weeks. We had lost three on the trot at home and it was difficult to play. We gave up some possession and we had to really dig in and make sure we were not an easy touch anymore, which we are not now. We’ve had some great away performances lately and our fans filled the end at Southend last week. To get the win was terrific and there was a real connection again with the fans.”

“Wimbledon’s front two are in a hard-working team. They are a young team with plenty of energy. I know what kind of player Joe Pigott is, he is always likely to get a goal and like most centre forwards you play against in this league, the ones scoring goals are the ones you need to take care of. Technically, he is very good, I have seen him score some brilliant goals when he was at Maidstone.”

“We dealt with Luton quite well, apart from the first goal. Callum Reilly misjudged the ball, which looped back towards their player and he scored.”

Will Nightingale (knee) is unlikely to be risked for Saturday’s game, but Rod McDonald and Deji Oshilaja are both in contention to return to the squad. Kwesi Appiah is away on international duty. His fitness will be reassessed by Ghana’s medical staff in terms of his possible participation for the match against Kenya on Saturday. James Hanson is likely to return to the Wimbledon squad after a chest infection.

For Gillingham, Alex Lacey is available to return at the Cherry Red Records Stadium. Defender Lacey, who has not made a first-team appearance for two months due to an ankle issue, came through a midweek Kent Senior Cup match unscathed. Former Dons midfielder Dean Parrett has been suffering with illness, but he is expected to recover in time to be involved. Ricky Holmes (back) and Billy Bingham (calf) are still not ready to return, while Gabriel Zakuani (ankle) is out for the season.

In a hard-fought battle at Priestfield Stadium, Joe Pigott scored the only goal of the game. It was a fine finish in the 53rd minute as Pigott rounded Gillingham keeper Tomas Holy, before finishing clinically from an acute angle. See below for highlights from that game.

In an eventful second-half, Wimbledon fell behind just after the hour, but Lyle Taylor equalised from the penalty spot. However, Max Ehmer put Gills back in front, before a late equaliser from Harry Forrester earned Wimbledon a share of the spoils.

Wimbledon marched into a first-half lead through Andy Barcham, but missed chances cost The Dons all three points. Despite being reduced to 10 men through Lee Martin’s sending off, Gillingham equalised in first-half injury-time through Sean Clare, and that’s the way it stayed.

AFC Wimbledon’s four-match unbeaten run came to an end this afternoon with Gillingham coming from behind to earn victory.

At 1-0 up and with Wimbledon playing really well, there was little indication of what was to come, but Gillingham scored twice in three first-half minutes and eventually triumphed 4-2. James Hanson's header came deep into injury-time and it was of consolation value only.

A fine start to this game had suggested that Wimbledon were in the mood to build on the impressive run of five wins in seven matches, but that all changed with that goal blitz before the break. With seven matches still to play this season, it’s vital that Wimbledon’s players put this performance behind them.

Wally Downes was forced to make one change to his starting line-up due to Will Nightingale’s knee injury and that meant a recall for Rod McDonald after his midweek appearance for the development squad. The Dons came into this match full of confidence after a superb run of five wins in the last seven games, though Gillingham were sure to be a tough nut to crack after drawing at Champions-elect Luton last time out. Gills selected former Dons captain Barry Fuller in their starting line-up at left-back with Dean Parrett, who also helped us to stay in League One last season, on the substitutes’ bench.

Wimbledon started brightly with in-form marksman Joe Pigott showing signs of promise. Pigott sent over a superb cross from the left that found his strike partner Michael Folivi, but his header was too close to Tomas Holy, who did well to hold it. In an all-action start from Pigott, the forward then did well to find space on the right and his cut-back picked out Steve Seddon, but his shot was wide and claims for a corner fell on deaf ears. The Dons came so close to an opener in the eighth minute when Pigott struck a superb effort that thudded against the inside of a post and Gills just scrambled the ball to safety.

Considering how the first 20 minutes had gone with Wimbledon dominating, it was no surprise when the breakthrough was made and it was a goal of real quality too. Sibbick found space on the right to pick out Scott Wagstaff, who showed fine composure to find Folivi and he produced a clinical finish to make it 1-0. It was certainly a deserved lead, but the goal stirred Gillingham into action with the visitors starting to become a threat. A first real chance for Gills followed with Leonardo Da Silva Lopes setting up Brandon Hanlan, but his shot was well saved by Aaron Ramsdale.

As we approached the latter stages of the first-half, The Dons were maintaining a good shape and solidity in defence, but the equaliser arrived in the 40th minute. Lopes found Hanlan on the right and his powerful shot from an acute angle beat Ramsdale at his near post. Less than three minutes later, Gillingham were in front through a fortuitous goal. Graham Burke tried his luck with a speculative shot from 30 yards and Ramsdale allowed it to slip through his fingers and just over the line.

Having come into this game on the back of four clean sheets, The Dons had conceded two goals in three minutes. A quick-fire equaliser almost arrived when Pigott found space in the box, but he was denied by a good save from Holy and Gillingham scrambled the rebound clear. For the majority of the first-half, Wimbledon had played very well, and that offered encouragement that there could be a route back into this match. However, it was 3-1 to Gillingham in the 50th minute when Wimbledon allowed Lopes space in the area from a throw-in and he drilled home superbly. Gillingham threatened to make it four when Burke was put through by Lopes, but he toe-poked wide.

In an effort to turn it around, Wally Downes made a treble change just before the hour with James Hanson, Dylan Connolly, and Shane McLoughlin introduced for Michael Folivi, Scott Wagstaff, and Anthony Hartigan. However, any momentum Wimbledon looked to build was disrupted when the referee ordered that turf near to the centre circle had to be attended to. The groundsmen came on and the game was held up for a few minutes before it was re-started.

With Hanson in the thick of the action now, it was more of a direct response from Wimbledon, playing up to a target man and seeking to work off his knock downs. Gillingham stayed strong at the back though, making it difficult for Wimbledon to find a way back into it. The game was effectively all over in the 83rd minute when Tom Eaves headed home emphatically. Though James Hanson's header reduced the arrears in injury-time, it came too late to make any difference. It had been a tough afternoon for Wimbledon with Gillingham displaying ruthless finishing in the second-half. However, there is no time for Wimbledon’s players to feel sorry for themselves with seven games to go in the battle to stay up and a trip to Scunthorpe United up next.

AFC Wimbledon will on Saturday be aiming to extend an impressive run of form and there’s still time to snap-up your ticket for the big game.

Tickets for seated areas and the Chemflow End have now sold out for the match against Gillingham, but we do still have availability for the RyGas terrace (just £17 for adults). Buy your ticket from our online shop and cheer on The Dons in pursuit of a sixth win in eight games!

Though seated tickets are sold out, we will be operating a waiting list. E-mail info@afcwimbledon.ltd.uk to be put on the waiting list for any returns we receive from season ticket holders. If you are a Season Ticket holder not planning to attend, then please let us know using the above e-mail address.

All tickets ordered before Wednesday 20 March will have been posted out. Tickets ordered after this date will be made available for collection from the white ticket booth next to the Dons Trust kiosk before the game on Saturday.

We have a limited number of hospitality places available for £30 (not including match ticket).

Contact 020 8547 3336 or email commercial@afcwimbledon.co.uk to make a booking. Visit our Hospitality page for more information. 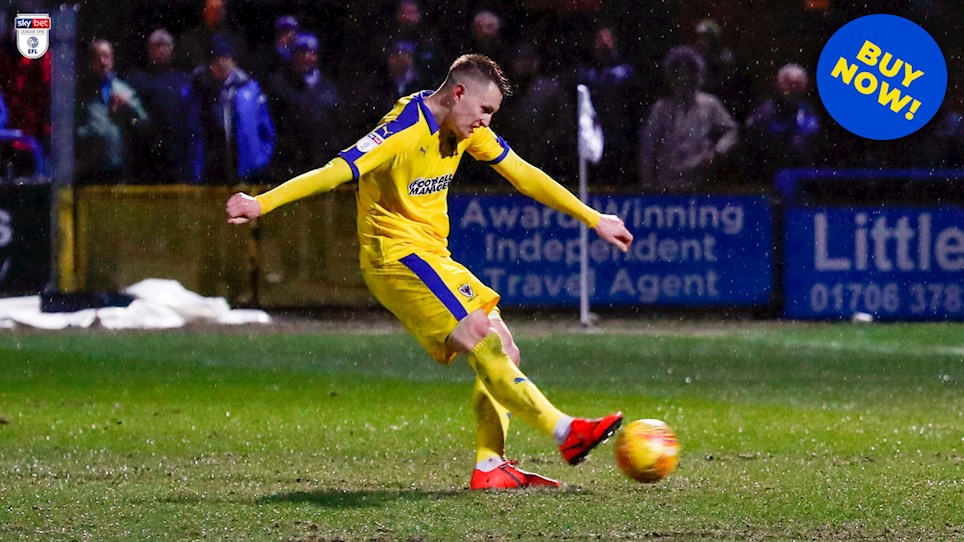 NEXT UP: The Dons vs The Gills


Grab your ticket, make some noise and get behind The Dons and help us push for League One survival. 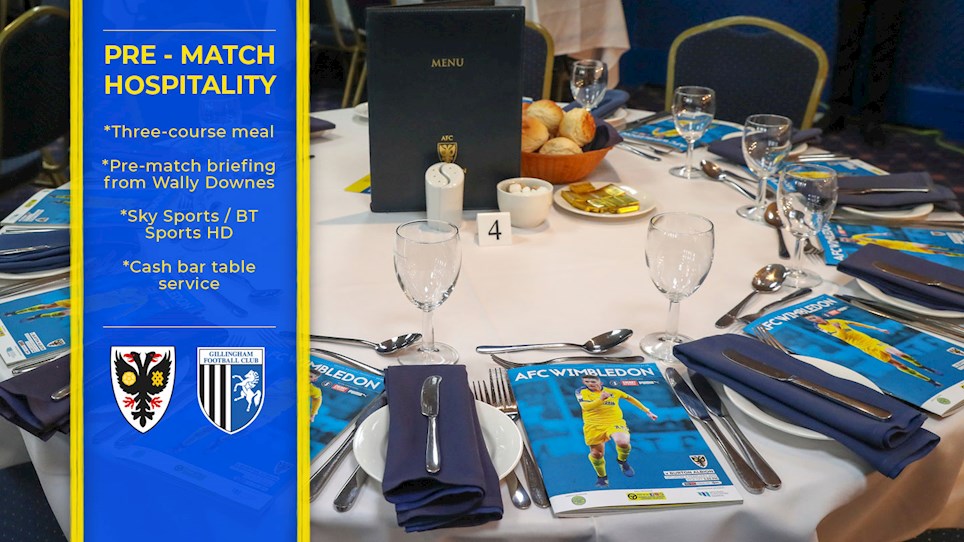 
Reserve your place in our pre-match hospitality suite before the Gillingham game on Saturday 23 March.