Wimbledon aim for a swift return to form tomorrow, when we visit a Scunthorpe side also battling for survival and currently under caretaker management.

The Dons look to recapture the touch that boosted chances of retaining our League One status, following an unbeaten run of four games and four clean sheets. That came to a halt following last weekend’s defeat at home to Gillingham.

Scunthorpe parted with boss Stuart McCall earlier this week and Andy Dawson was placed in temporary charge. Kenny Black has remained as Assistant Manager and Dawson’s former Hull City team-mate and ex-England international Nick Barmby has joined Scunthorpe’s coaching staff, as they bid to bring about a change in their results.

Wally Downes wants his side to eliminate the errors from last week’s game and show resilience, as they focus on rediscovering a winning formula.

Below are quotes from both camps, team news and stats ahead of another important game.

“We can’t be sure what team Scunthorpe will have out, but all I can do is make sure what we’re about.

"As long as we play how we can play and we’re on to one another, getting our game locked down and error free, that gives us a chance to go and express ourselves and play. We can’t do that the other way around. We can’t just go out and play and forget to do the things we’ve been good at recently."

“Scunthorpe have had a bit of a bad run. I saw Stuart McCall signed quite a few players in January and they picked up and it looked as if they were going to have a comfortable season in mid-table. With recent results though, they’ve slipped up.

“We’ll be going there fully confident and if we can get the win, we’ll only be two points behind them. It’s really tight and we can’t afford to lose against teams around us. It’s going to be a good game,

“Like the gaffer has said, maybe we’ve come away a little from what we’ve been doing, especially last week when we were one-nil up and we were playing really well. Then we made a couple of mistakes and went away from the game that had been working for us in previous weeks.

“All we’ve worked on this week is what we’ve done best, getting the results and hopefully we can continue to do that at Scunthorpe.”

“We’ve watched plenty of Wimbledon matches. They’ve been on a fantastic run of form, are organised, well drilled and can hit you quickly if you’re not prepared and organised.

“It really is all about us though, our plan and how we can execute, and having the confidence in the ability that we have in abundance to go and do that. Throughout 90 minutes of football, not everything goes your way. You stick to the plan, to the process and the result takes care of itself.”

Will Nightingale is ready to be pitched back into action for Wimbledon, after putting a knee injury behind him.

However the match will come too soon for Kwesi Appiah and Deji Oshilaja. Kwesi played and scored on international duty for Ghana in midweek, but Wally  said he’s not fit enough yet to be considered and the same applies to Deji.

Scunthorpe have no fresh injury worries heading into the match, with Kevin van Veen returning from a two-match suspension, and Tom Pearce and George Thomas back from international duty.

Josh Morris and Jordan Clarke are back training, but will still be out of action for an unspecified length of time. Ryan Colclough (knee) is out for the remainder of the season. Rory Watson (arm) also looks likely to be out for the rest of the campaign following surgery last month. Matthew Lund is out until April, after a clean-up operation on a knee problem.

Scunthorpe took all three points on their visit to the Cherry Red Records Stadium in mid-September of last year, following a 3-2 victory.

Wimbledon’s recent record at The Iron though is pretty decent. The two clubs drew 1-1 on the opening day of the 2017/18 season. Earlier, in 2017, The Dons secured an important 2-1 victory.

Form guide (last six, starting with the most recent)

Key information for Wimbledon fans making the trip to support The Dons can be found via Scunthorpe United.

If you can’t make the trip to Glanford Park you can keep up with all the action from our Radio WDON team, who will be providing full match commentary via our iFollow Dons platform.

James Hanson chose a timely occasion to strike his first Wimbledon double with his goals lifting The Dons to another valuable victory in the battle to stay up.

Hanson scored through a trademark header midway through the first-half, but his superb strike after a fine assist by Joe Pigott ultimately proved to be the difference in a 2-1 victory at Glanford Park. Though Lee Novak halved the deficit, Wimbledon didn’t deserve to be pegged back and it’s now four away wins from the last five on the road.

Wally Downes made three changes to his starting line-up after the defeat against Gillingham. James Hanson, Will Nightingale, and Shane McLoughlin all earned recalls with Michael Folivi, Terell Thomas, and Scott Wagstaff having to settle for places on the bench. With Andy Barcham ruled out due to illness, it meant a return to the squad for Kwesi Appiah, who was on the substitutes’ bench.

Taking on a Scunthorpe side with caretaker manager Andy Dawson in charge, Wimbledon produced exactly the start required to stop a team out of form from gaining in confidence. Just inside 10 minutes and Wimbledon earned a golden opportunity to take the lead when Steve Seddon was brought down in the box by keeper Jak Alnwick after a lovely through ball by Anthony Hartigan. Joe Pigott stepped up, but his shot was too close to Alnwick, who dived to his right to save it. The kick didn’t match the quality of his penalty strikes against Rochdale and Peterborough, but Alnwick did well to guess the right way.

Far from galvanising Scunthorpe, it had the opposite effect, with Wimbledon continuing to take the game to their opponents. The breakthrough came in the 23rd minute with a goal from a set-piece that vindicated the decision to hand James Hanson his first League One start for months. A lovely delivery from a free-kick on the right by Anthony Wordsworth picked out the towering striker at the near post and his glancing header left Alnwick with no chance. After taking the lead, there was no let-up from Wimbledon and it was 2-0 in the 29th minute with another goal from Hanson. It was a completely different goal this time, but an even better one as Hanson fired home superbly into the bottom corner after a back-heal from strike partner Joe Pigott set him up.

Wimbledon’s first half hour had been full of attacking intent and the two-goal advantage certainly didn’t flatter The Dons. Another fine move ended with Wordsworth picking out Sibbick on the right, but his cross was well held by Alnwick. As we approached half-time, the Scunthorpe fans were getting restless, as they watched their team create very little. Indeed, Aaron Ramsdale had nothing meaningful of note to do in the first-half and it had been an impressive first-half performance from Wimbledon in all departments.

The hosts finally started to threaten a little at the start of the second-half. Ramsdale just failed to gather a cross and it fell nicely for Scunthorpe substitute Adam Hammill, but he took too long and with the angle against him, he blazed wide. It was only a brief spell of home pressure though and Wimbledon started to dominate again. Wordsworth, who produced good quality on the day, especially with his crossing, again picked out Hanson, but no one was able to get on the end of his knock-down. Paul Kalambayi also had an acrobatic effort well blocked as Wimbledon searched for a third goal to kill the game.

With 67 minutes on the clock, Wally Downes decided to make a double change. James Hanson was withdrawn and he was given a standing ovation from the travelling Dons after his most meaningful contribution in a Wimbledon shirt since joining last summer. Kwesi Appiah was the man to replace him and Scott Wagstaff was also introduced for Shane McLoughlin. The home side started to exert pressure at the other end though and they should have got one back with 15 minutes to go. Lee Novak headed wide from close-range when he should really have scored. However, it was only a temporary reprieve for Wimbledon. A shot from Adam Hammill was parried by Ramsdale and this time Novak made no mistake.

Despite late pressure from the hosts, Wimbledon defended really well to hold on for another precious three points on the road. The Dons have shown plenty of fight to stay up recently, and no shortage of quality too, and on the evidence of this performance there’s every chance that Wimbledon can complete the job.

AFC Wimbledon are on the road again this Saturday with an important League One match at Scunthorpe United and you can book your travel through the club.

We've had high demand for the supporters' coach to Lincolnshire, but there are still places available to book your place.

The coach will pick-up from opposite South Wimbledon tube station at 8.00 am and from the Cherry Red Records Stadium at 8.30 am. The price is £28 and seats can be reserved by contacting the club office on 020 8547 3528. 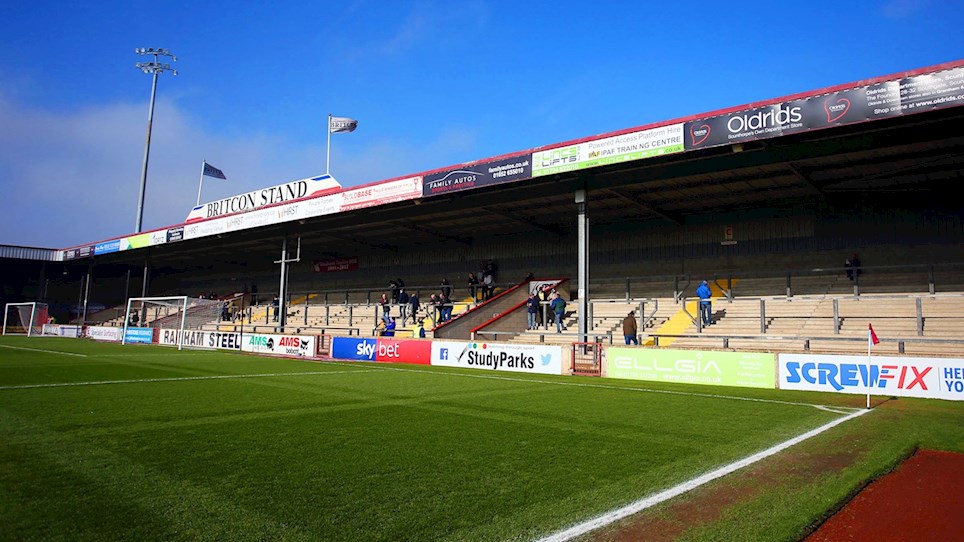 
AFC Wimbledon's next League One match is at Scunthorpe United on Saturday and supporters can buy tickets in advance for this game. 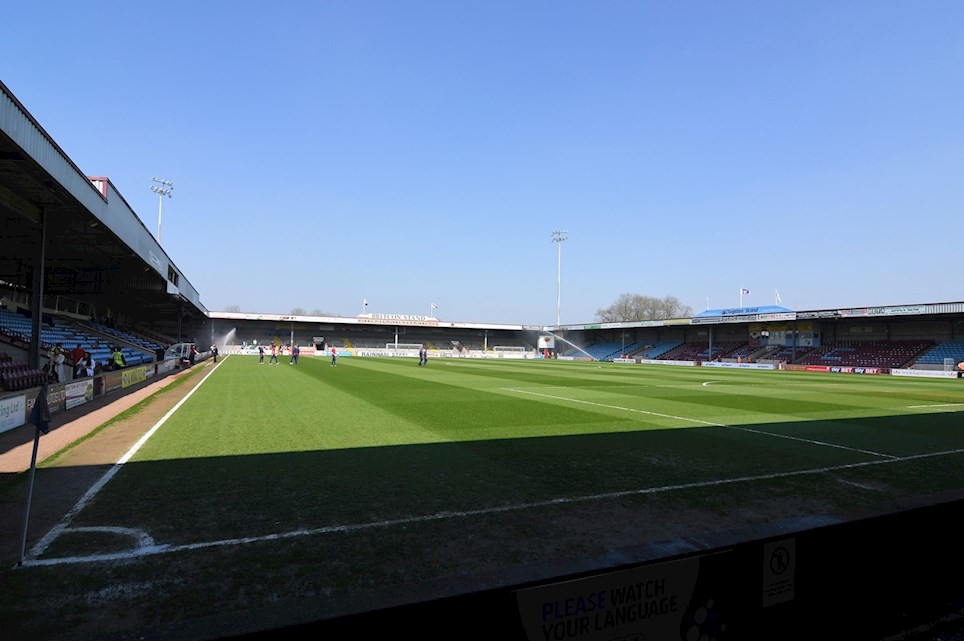 
Dons on tour! Calling all away day Dons, tickets are now on sale for our away fixture at Glanford Park.