Wally Downes said that Rod McDonald is back in contention for the trip to Bradford City on Saturday and he has virtually a fully fit squad to select from.

McDonald has been missing with a groin injury since being withdrawn at half-time during the 2-2 draw at title-chasers Luton, but he has shaken off a groin injury in time to make the squad. It means that Scott Wagstaff is the only squad member ruled out, as he misses the final League One match of the season.

Speaking during an interview for iFollow, our manager said: “Rod is back training, he trained on Tuesday, and he was out there again today. I have virtually a fully-fit squad. There are going to be a couple disappointed, but the ones who get the nod will be going full-blast, and so will the substitutes.”

The Dons head to West Yorkshire with their destiny in their own hands. Barring a big shift in goal difference, a point at Bradford will guarantee League One survival, but Wally says that the focus has to be on simply winning the game.

“The players are not stupid, they know what’s in hand, so I’ve not harped on about it," added Wally. "I am just approaching this game in the same way as we have every other game. It’s pointless me playing it down or hyping it up. Everyone knows what’s required. Everyone knows all the permutations, except me, so we are just going up there to try and win the next game.

“They (Bradford) are playing with a bit of freedom now. I know there is a bit of a burden on teams that are down there, but when they know their fate that burden can be lifted off their shoulders. You’ve seen it with Fulham, there is a freedom that they can play with. We need to prepare properly so that we go out and do our jobs.”

An impressive run of form has provided Wimbledon with a great opportunity to stay up. Wally said that building up the confidence of a squad lacking in confidence was important after he was appointed.

“When I initially came in I had to get them to buy into how I wanted the team to change,” said Wally. “There were some difficult times when we were cut adrift, but I had to keep telling them that I could see improvement in the team. They had to stick with it and believe in it. When you come out of the other side and results start turning, everyone can see that it’s worthwhile.

“The satisfaction for me is in seeing players improve and being able to put the players that have improved in winning situations into a good team. That’s where I get my satisfaction from.”

The full interview with Wally is available to watch by clicking on the link to our iFollow channel above.

AFC Wimbledon produced a resilient away display at Bradford to stay in League One for another season.

With Southend and Plymouth both winning, the point was essential and The Dons earned a 0-0 draw that was just enough to stay up.

Such a scenario had looked a forlorn hope in March when a draw at Shrewsbury left Wimbledon 10 points off safety, but a superb run of form, completely against the odds, keeps the club in the third tier of English football.

Following the hard-fought win against Wycombe Wanderers, Wally Downes decided to select an unchanged starting line-up for this match. The Dons came into this match unbeaten in six matches and seeking a result that would guarantee League One survival. Though a point was likely to be enough, the manager and his players made the right noises about going all out for maximum points so that no help was required from elsewhere.

Though Wally’s boys were facing a Bradford side already relegated, the Bantams had restored pride by beating Scunthorpe last week and the attitude had to be right from a Wimbledon perspective. Certainly, the fact that Wimbledon were unbeaten away from home since Sunderland at the start of February was a big positive. Before kick-off, both clubs were united in remembering the victims of the Bradford Fire Disaster and an impeccable minute’s silence was observed.

The hosts started on the front foot and Wimbledon were forced to defend deep. Around 2,000 travelling Dons watched their team make a nervy start and Aaron Ramsdale was forced to make a decent save in the 12th minute when he tipped over a drive from outside the area by Kelvin Mellor. From the subsequent corner, James Hanson showed his aerial ability against his old club with an emphatic defensive header to clear the danger. The only goal attempt from Wimbledon in the first half hour came from Anthony Wordsworth, who shot well wide with his appeals for a corner falling on deaf ears. Following a first half hour of little goalmouth incident, Wimbledon started to dominate possession, at least offering a chance to create chances after a slow start.

In the latter stages of the first-half, Bradford came close when Paudie O’Connor flicked on a long throw-in from Mellor and Eoin Doyle got on the end of it, but his shot was just wide. There was an almost instant response from Wimbledon with Seddon finding space on the left and striking a shot that forced Ben Wilson into his first save of the match so far. At half-time, Wimbledon could be pleased with the defensive display, but there had been little to enthuse about from an attacking perspective. However, scores elsewhere at this stage meant that Wimbledon would be safe with a draw.

The second-half started with Wimbledon showing more attacking intent with Joe Pigott at the heart of it. The in-form striker showed impressive sharpness to find space in the area, but his goal-bound shot was blocked and Wordsworth shot wide from the rebound. At the other end, Sean Scannell flashed a shot just wide that Ramsdale appeared to have covered if it had been inside his near post. Wimbledon came so close to making the breakthrough in the 64th minute. Pigott again showed his quality to go through on goal, but his shot was cleared off the line and Hartigan’s follow-up was well saved by Wilson.

Wimbledon’s near miss seemed to galvanise Bradford with the hosts pouring forward and the home support cranking up the atmosphere. However, Wimbledon’s defence, which had been much improved in recent months, held firm under sustained pressure. With 15 minutes to go, it was all still in the balance for Wimbledon. Holding on for a draw would definitely be enough due to scores elsewhere, and The Dons had to look after themselves to try to end the season by stretching that impressive unbeaten away run.

In the latter stages Pinnock struck a fierce drive just wide of the target. As news filtered through that Southend had taken the lead against Sunderland, Wimbledon could not afford to concede or it would have meant relegation. Bradford poured forward in the latter stages and Wimbledon had to hold firm under great pressure, but the defence stayed strong and the final whistle signalled jubilant scenes from players, staff, and supporters.

Thank you to all Dons for your amazing support this season. We have so far sold over 1,700 tickets in advance and filled 6 supporters’ coaches for our season finale at Bradford City.

Tickets are still available to buy online. Adult tickets are £5 more expensive on match day, so it’s well worth booking in advance.

Dons fans will be seated in the Northern Commercials Stand (on Midland Road) and the TL Dallas Stand (on Holywell Ash Lane). Advance ticket prices for the match are as follows:

Buying on the day

Please note that there will be a limited amount of tickets available on the day. These will be sold from the away turnstiles on a first come first served basis (cash only). We recommend any Dons buying a ticket on the day to do so in good time before the scheduled 5.30 pm kick-off.

A Visitors' Guide to the Northern Commercials Stadium for away supporters can be found on www.bradfordcityfc.co.uk

Six supporters' coaches are fully booked. We can no longer take any more bookings.

This will leave from opposite South Wimbledon tube station at 10.00 am and from the Cherry Red Records Stadium at 10.30 am.

We will not be screening this game at our ground. However, if you are a UK & Ireland based iFollow ‘monthly pass’ subscriber you can listen to the Radio WDON commentary team from 17.30 this Saturday. Find out more about subscribing to iFollow.

Get behind Wally's boys any way you can and make some noise for The Dons! 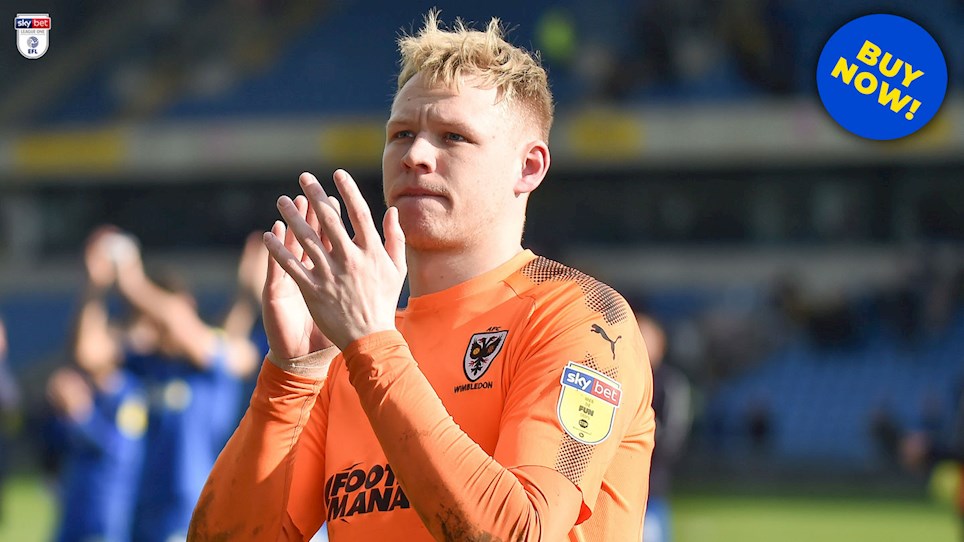 
Dons on tour! We recommend buying your tickets for our trip to Bradford in advance online or from our ticket office (09:30 - 17.00 Monday to Friday). 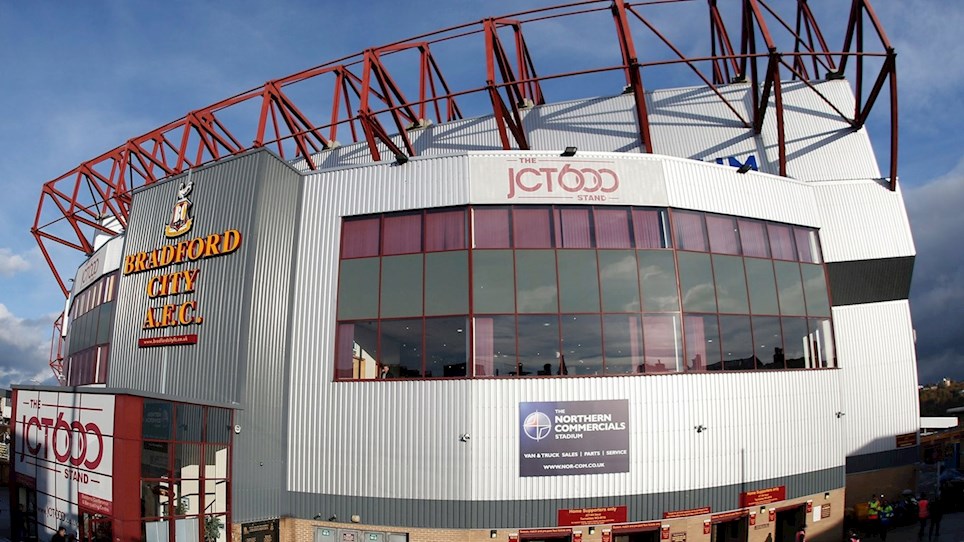 
Dons on tour! One supporters' coach is fully booked. We are taking bookings for a second coach to our season finale at Bradford City on Saturday 4 May (5.30 pm kick-off).

All aboard the supporters’ coach for Bradford


Dons on tour! One supporters' coach is fully booked. We are now taking bookings for a second coach to our season finale at Bradford City on Saturday 4 May (5.30 pm kick-off).