Wimbledon go in search of points tomorrow against a Luton side that have adapted quickly to life in League One.

Of course, the meeting of the two clubs will always conjure up great images of that Blue Square Bet Premier Play–Off final seven years ago for Dons fans. Since then, Luton have followed Wimbledon in reclaiming their Football League place and in being promoted to League One just last season.

While the Dons will be concentrating on pulling away from the wrong end of the table with a much-needed win, Luton go into this meeting in sixth place under manager Nathan Jones. As the Dons bid to put Tuesday night’s disappointing defeat at Bristol Rovers behind them, Luton arrive off the back of a 4-1 victory over Accrington Stanley.

Striker Danny Hylton, on loan to Wimbledon in the past, scored a hat-trick on Tuesday night. The game is also expected to mark another return to the Cherry Red Records Stadium for former Dons' favourite James Shea, currently first choice keeper for Luton.

“They (Luton) are one of the best teams in the league for me, from what I’ve seen of them. It’s going to be tough. What can I ask the boys to do? I can ask them to go about their jobs the way they did at Bristol Rovers – give everything, run hard for the club, keep trying to ask questions of the opposition, keep trying to score goals. Hopefully one goes in. Things can change and everyone is giving everything.”

“They are a big club, a good team with a good manager. Their home form this year has been excellent - not so good away from home. We know we’ve got to get our home form going and there is no better place to start than Saturday.

“James Shea went there and had to fight to get in their team. He’s managed to do that, so credit to him. It will be nice to see him, but hopefully he doesn’t leave our ground too happy on Saturday.”

“We’re more concerned about everything we do. We’re in a different kind of form to them, but as I said the margins are so small, if they get a goal early on, it could gee them up.

“I know that from probably the biggest learning curve I had in management, losing 4-1 there when we actually felt we played reasonably well in the middle thirds, it was just both boxes we weren’t. That was a learning curve for me, so we won’t make that mistake again.”

Wimbledon will be without forward Jake Jervis, who is on a season-long loan from Luton. Defender Tyler Garratt, midfielder Anthony Wordsworth and winger Andy Barcham are all likely to remain sidelined, but there are no fresh injury concerns.

Luton will have a full strength squad to choose from, apart from defender Dan Potts and midfielder Luke Berry.

Luton won the last meeting between the two club, just under a year ago, with a 2-1 victory at the Dons in the Football League Trophy.

In League Two though, at the Cherry Red Records Stadium, Wimbledon beat Luton 3-2 in February of 2015 . David Connolly scored a dramatic, last-gasp winner for the Dons.

A year later, in 2016, Wimbledon won 4-1 against the Hatters and you can re-live the goals from that meeting below, via our official YouTube channel.

This match is all-ticket, but you can still buy terrace tickets online until 11.00 am on Saturday. You must have a previous purchase history to buy a ticket for the game. See our Match Details article for more information about tickets.

If you can't make the game then commentary is available from our WDON team, via our iFollow Dons platform. Go to our dedicated iFollow page for further information. 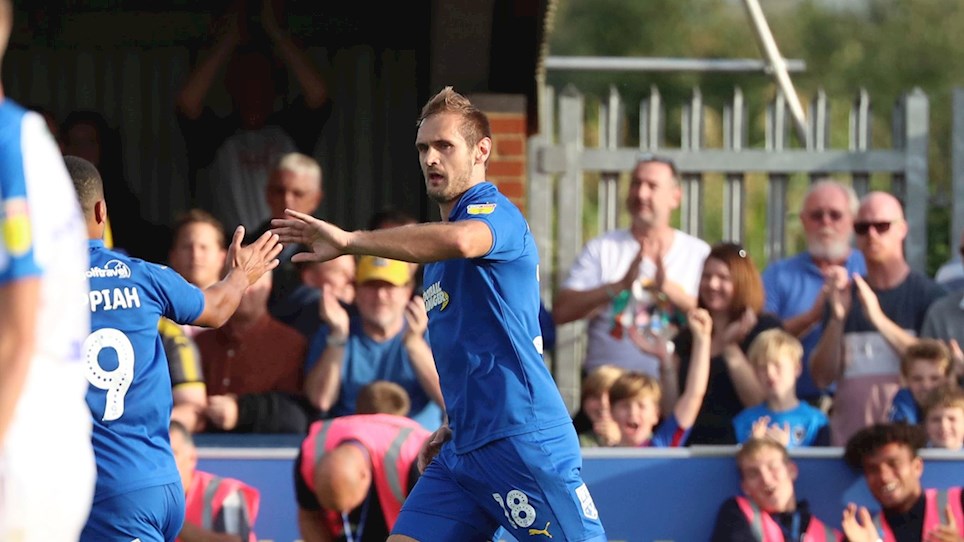 Match Details: For the Dons vs Luton Town


AFC Wimbledon will be looking for their fourth league win of the season when they take on sixth placed Luton Town on Saturday.

The Dons return to home this coming Saturday to face The Hatters at the Cherry Red Records Stadium. This match is an all-ticket game, so make sure you buy your tickets in advance.

Tickets cannot be purchased on the day. You must have a previous purchase history, this could be for tickets or merchandise, to buy tickets for this match.

Terrace tickets are still available to buy online in the RyGas Terrace and Chemflow End.

Follow the below link to our online ticket store and login to your account (top right-hand corner) before purchasing your tickets.

Please note at present seated tickets are sold out and not available to buy online. However, if you email info@afcwimbledon.ltd.uk we will be operating a waiting list for any returns we receive.

Any tickets purchased after Tuesday 23 October will be available for collection on Saturday 27 October prior to kick-off from the white booth in Jack Goodchild Way.

For any fans that missed the information regarding ticket checking on entry into Jack Goodchild Way before you enter the ground - please do read this in advance of Saturday's game here.


For this game fans will need to make sure they have their ticket with them when they arrive at the ground, as they will be required to show their season ticket or printed match ticket to security...

Luton Hospitality | Treat yourself this Saturday


Make your Dons day out extra special with a match ticket, three course meal and pre-match briefing from Neal Ardley before your beloved Dons take on The Hatters (Saturday 27 October).


The Dons return to home this coming Saturday to face The Hatters at the Cherry Red Records Stadium. This match is an all-ticket game, so make sure you buy your tickets in advance.