AFC Wimbledon will on Saturday be aiming for more away joy against familiar foes in South Devon.

Just a season after Wimbledon's memorable Wembley triumph in 2016 against Plymouth, Derek Adams guided the Green Army to promotion.

Plymouth edged last season's encounters, but Wimbledon have a great record at Home Park since promotion back to the Football League back in 2011 and Neal Ardley's men will be seeking to extend that tomorrow. The Dons have so far this season won away games at Fleetwood, Portsmouth (Carabao Cup), and Gillingham.

Jake Jervis (pictured in action against the Dons at Wembley) played a part in Plymouth's promotion success back in 2017 and the Wimbledon striker, on loan from Luton Town, will be aiming to make an impression against his former club. Ben Purrington is another former Argyle player, the left-back having progressed through the youth ranks into the first-team, before departing for Rotherham in January 2017.

Below are quotes from both managers and stats ahead of the game:

"Away from home we have to do our best to limit mistakes that we make, be confident in the way we play going forward, and so on and so forth. It's going to be tough, they have some good players, I don't care where they are in the league. They produced a good performance at Barnsley and they have good threats going forward.

"I know they have a lot of injuries, but there is not a lot wrong with the team they've got. They have players that can hurt you, as we know. We will try to focus on us. We will make sure we're aware of them and show them the utmost respect because they deserve it, but we will try to get back to playing the way we did in early season. It's not an overnight fix, we just have to restore confidence that results sometimes beat out of you.

"We haven't got anywhere near as many wins as we should have and we haven't got as many wins as our performances deserve. We've got to try not to feel sorry for ourselves and to try and get the swagger back, the attacking play that we had at the start of the season, but also limit the errors we have made.

"We are a team that believe we can win wherever we play. We have obviously found it more difficult at home, teams have set-up differently against us, but we feel that if we keep performing like we were in early season then the results have to follow. You can't keep being that unlucky and we've come away from that (early season form). We need to lift the spirits of the boys, try to get them back believing they can do it, and they have to then perform and do what's needed away from home."

"We've had some good games and my first game in the league competition was against Wimbledon. It was a memorable day, we won 2-0 and scored two good goals from (Gregg) Wylde and (Graham) Carey. We've come through the leagues together and he (Neal) has done a very good job. To get them where they are is probably where they are going to be, in League One, until they get further investment. It's a tough league and they've done well to get into League One, and to stabilise over the past couple of years.

"We obviously want to get the win because performances have been good. We need to turn performances into wins. We were unfortunate not to win at Barnsley and I was delighted with the way that we played. We didn't get back until 4.30 am in the morning and I'm sure that was the same for our supporters. It is a long way on a Tuesday night but we're back now, and we thank the supporters who travelled. It means we can't train in the normal way, the players have to rest and get ready for Wimbledon. We now need to start winning games."

The Dons threatened to pull off a thrilling fightback after trailing 3-0 at half-time. Goals from Graham Carey, David Fox and Ryan Taylor had put Plymouth well in charge, but Lyle Taylor's second-half double reduced the deficit to 3-2. Ruben Lameiras provided breathing space for the hosts with a fourth goal and Taylor missed a chance to set-up a grandstand finale by having his spot-kick saved. Click on the link below to watch the highlights.

Wimbledon supporters can pay on the day to get behind the Dons. Due to a redevelopment of facilities at Home Park, there will be a designated cash turnstile on the away end (Barn Park Stand). Plymouth are advising Dons supporters to use this as the ticket office is the only place that takes card payments and there could be lengthy queues pre-match.

Dons supporters who have ordered tickets in advance can pick them up from turnstile 23 at the away end. This will be for advance tickets ordered online after midday on Wednesday 3 October.

Ticket prices for the match on Saturday are as follows:

Follow the match action from Home Park by tuning into our subscription channel. Domestic subscribers can listen to WDON radio coverage and fans overseas can watch a live video stream. Visit our iFollow page to subscribe.

Wimbledon slipped to defeat in South Devon today with a goal from Freddie Ladapo earning a slender victory for Plymouth Argyle.

The Dons had several chances at the start of the second-half, without taking any of them, and it ended with a 1-0 loss at Home Park. On the balance of play, it was perhaps an undeserved defeat, the hosts edging it with a more clinical edge.

Neal Ardley made just one change to his starting line-up with Andy Barcham earning a recall in place of Mitch Pinnock, who was on the bench. Two former Plymouth players got the nod to start against their old club with Jake Jervis and Ben Purrington both selected.

AFC Wimbledon made a bright start at Home Park with Liam Trotter attempting a shot inside two minutes, but his shot flashed over the crossbar. Scott Wagstaff looked particularly lively early on, the midfielder aiming to add to his recent scoring spree and he had a goal-bound shot blocked. Then Barcham found space on the left and delivered a cross that Wagstaff headed just wide. A real positive of the opening exchanges was good link-up play between Barcham and Purrington, but the latter was just unable to find a Dons target in the box after a promising move early on.

With 17 minutes on the clock, Wimbledon threatened to make the breakthrough when the hosts failed to clear a corner. A goalmouth scramble ensued and Pigott looked certain to score, but he twice had close-range efforts blocked. The Dons had plenty of possession in the first-half with Trotter and Tom Soares getting on the ball a lot. Plymouth finally threatened in the 22nd minute when a free-kick was swung into the box and Yann Songo'o rose highest to get in a header that was well saved by Joe McDonnell, but the flag was up for offside. Freddie Ladapo also had a decent chance after slack defensive play from the Dons initially, but Rod McDonald got back well to block his effort.

Plymouth had the best chance of the game so far in the 35th minute. Wimbledon gave the ball away at the back and it allowed Ladapo to power through on goal, but Deji Oshilaja got back well to get a last-ditch slide tackle in, the ball ending up in McDonnell's hands. Following a promising start, Wimbledon had struggled to mount meaningful attacks, but there was a better spell from Neal Ardley's men just before half-time. A lovely run and cross from Wagstaff ended with a headed chance for Jake Jervis, but his effort was well over. Then Jervis got on the end of a well delivered corner by Wagstaff, but this time he headed wide.

As the half-time whistle shrilled with the score at 0-0, Wimbledon could be pleased with the defensive display, but more was required if the Dons wanted to get three points.

The second-half opened with more urgency from Wimbledon to open the scoring. Jervis headed over again after a good cross from Wagstaff, before the Dons came even closer to a goal shortly afterwards. Good attacking play involving Jervis and Barcham ended with a shooting chance for Joe Pigott and he produced a lovely curler, but it just missed the far post. As Wimbledon attempted to maintain the momentum, Jervis had a shot deflected wide, before Yann Songo'o just managed to get to a corner before Oshilaja.

With an hour gone, there had been no change in the pattern of this game with Wimbledon continuing to threaten, as anxiety increased amongst the home support. The Dons came so close to a breakthrough in the 62nd minute. Oshilaja fired across the face of goal and it picked out Jervis, who appeared set to score his first Wimbledon goal, but his effort was too close to Plymouth keeper Matt Macey, who did well to save.

At the other end, a slack throw-in from the Dons was almost punished when the ball was quickly worked to Ladapo, but hit shot was deflected over. However, there was no reprieve for Wimbledon in the 75th minute. Graham Carey got a short corner back from Ruben Lameiras and his cross was headed home by Ladapo. Shortly afterwards, Wimbledon needed McDonnell to react well to stop Carey from making it 2-0. There was no way back, the Dons unable to restore parity in front of 322 travelling supporters. Next up for Wimbledon is a home match against promotion contenders Portsmouth.

AFC Wimbledon will be aiming to get back to winning ways at Plymouth on Saturday and tickets are available to cheer on the Dons in South Devon.

You can buy in advance up until 4.00 pm today and collect from Home Park before the game. Alternatively, you can pay on the day.

Advance ticket prices for the match at Plymouth are as follows:

Please note that all ticket prices increase by £2 on a match day.

Book in advance by visiting our online ticket shop.

Tickets ordered online after midday on Wednesday 3 October can be collected from Home Park before the game. 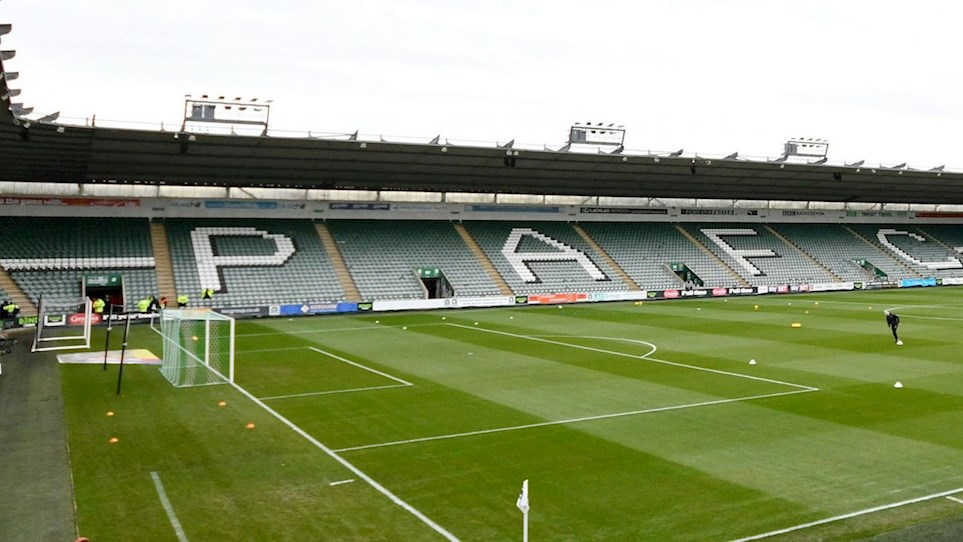 Tickets on sale for Plymouth away