Neal Ardley’s men aim to add to their points haul they’ve picked up on the road this season when they visit Accrington Stanley this Saturday.

Wimbledon’s two wins in the league so far this season have come on their travels, with victories at Fleetwood on the opening day and from the last away game at Gillingham a fortnight ago.

Standing in the Dons way though is a tough Stanley side likely to contain several survivors keen to avenge the outcome of their last meeting. On that occasion, over two years ago, Wimbledon drew 2-2 at Accrington. With Neal’s side having already won 1-0 at the Cherry Red Records Stadium in the first leg of a semi-final, it sealed a place in the 2016 League Two Play-off final on route to promotion.

Accrington eventually joined the Dons in League One this season, having been promoted as champions last term. Since then they’ve only lost once, on the opening day of the league campaign against Gillingham. Meanwhile, Wimbledon want to put back-to-back home defeats quickly behind them and return to good habits at the Wham Stadium.

Below are quotes from both managers, plus stats, ahead of tomorrow's game.

“We need to go with our ‘A’ game and play really, really well if we’re going to be on that long journey home with anything to show for it.

“The onus is on Accrington, they’ll think it’s a game they can win. They’ll come to win it, naturally at home. We’ve got to do all the stuff you need to do to win a game away from home. We know that at home we haven’t quite managed to do that as teams have come and made it difficult for us. We’ve created our own downfalls at times at home, but that will turn, I’m confident it will turn and the results and the consistency will be there.

“Last season they were phenomenal and even the season before. They didn’t start great, but came strong. Whatever team John Coleman puts out, they play extremely good football and they cause you a load of problems. He’s still got quite a few that were there from two years ago and they are playing as well as ever.”

“I felt low after the Wimbledon game (in 2016), but not as low as I felt after Stevenage three weeks earlier. A lot of water has gone under the bridge since then, they are both totally different sides and I am looking forward to the game. We know they can be a handful. We have Scott Brown, Mark Hughes, Sean McConville, Billy Kee, Piero Mingoia and Seamus Conneely still here from that game and they may still feel sore from it.

“The main emphasis for us though is to get that elusive first home win, no matter who we are playing. We need to take the lead, we have done well to come back and get something in seven out of our games this season, but we can’t keep falling behind as it won’t always happen. Connor Ripley (goalkeeper) is frustrated he hasn’t got a clean sheet.”

Accrington pretty much have a clean bill of health. Striker Billy Kee has not reported any after effects of a foot injury that troubled him earlier in the season. Luke Charman is their only doubt with a minor quad muscle problem.

Neal Ardley is hopeful that James Hanson will be back available this weekend. Hanson returned to full training this week after struggling with a calf injury and so too did fellow forward Jake Jervis, who missed the midweek Checkatrade Trophy defeat to Swansea due to a hamstring injury. However, the manager does have one or two other doubts (Anthony Wordsworth and Kwesi Appiah) for Saturday's away game.

(in all competitions, starting with most recent)

Overall, home and away between Accrington Stanley and AFC Wimbledon, Accy have the edge – having won six previous meetings. Wimbledon have won on three occasions  There have been three draws between the two clubs - including the most recent match on 18 May, 2016 when the Dons booked their place in the Play-off final at Wembley.

You can see the highlights of the semi-final second leg below, via our official YouTube channel.

Durham and England fast bowler Mark Wood will be looking out for the score at the Wham Stadium as a keen Wimbledon fan. Commentator David “Bumble” Lloyd, the former Lancashire and England batsman and England Coach, is a lifelong Accrington supporter and played for them during the 1960s.

Wimbledon supporters can pay on the day for this game at the away ticket office; situated in the blue cabin close to the away turnstiles (also where you can collect pre-booked tickets). Please see our previous article for further details.

A much-improved second-half display from Wimbledon was not enough to earn a point at Accrington Stanley today.

At 2-0 down on the hour, the Dons looked dead and buried, but substitute Scott Wagstaff struck a superb individual effort and Jake Jervis, who also made a positive impression after coming off the bench, came close to an equaliser.

Wimbledon paid the price for starting too slowly, handing the initiative to Accrington and in the end they did just enough to secure the 2-1 victory, despite late Dons pressure.

Neal Ardley made two changes to the 11 that started Wimbledon’s last league game against Scunthorpe United. James Hanson was recalled after injury with Kwesi Appiah missing out and goalkeeper Joe McDonnell got the nod to make his first league appearance of the season in place of Tom King.

Accrington made a high tempo start, which immediately put Wimbledon on the back foot, and McDonnell was required to make a fine save to stop Jordan Clark’s drive in the first minute. However, that was just a temporary reprieve and it was 1-0 less than four minutes later. Billy Kee, who was regularly a thorn in Wimbledon’s side during previous matches, was allowed time on the edge of the area to have a crack at goal. Kee didn’t need any second invitation to try his luck and he found the bottom corner with McDonnell just unable to keep it out.

Though Andy Barcham tested Connor Ripley shortly after Wimbledon fell behind, that did not signal a change in the pattern of this first-half. Dan Barlaser volleyed over the crossbar after getting on the end of a nice headed flick by Michael Ihiekwe. Wimbledon needed McDonnell to make a fine save to prevent Accrington doubling the advantage when he denied Kee, who had been set-up by McConville. The home pressure continued as we approached the 20-minute mark and McDonnell had to make a decent save with his legs to stop Nick Anderton’s shot from an acute angle. Wimbledon at least showed signs of life when Hanson and Pigott combined to almost put Barcham clean through, but he was just unable to reach the pass.

McDonnell had certainly been busy in the first half an hour and he also reacted well to stop McConville finding the back of the net. One of Wimbledon’s few good first-half moves followed and it ended with Barcham finding Pigott in space, but his shot was well saved by Ripley. Accrington threatened again five minutes before half-time when Clark had a shot blocked and McDonnell was able to gather the ball. Wimbledon ended the half by finally sustaining a bit of pressure and Accrington managed to just clear the ball after a goalmouth scramble. However, much better was required from Wimbledon in the second-half to get something from this game.

Neal Ardley made a half-time change with Scott Wagstaff introduced for Andy Barcham. The Dons did start the second-half with much more attacking intent and a chance followed just three minutes in when Liam Trotter had a close-range shot just saved by Ripley. Wimbledon came so close to an equaliser with 10 minutes of the second-half gone. Pigott found Hanson with a clever flick and he came so close to his first Wimbledon goal with a superb drive that just flashed over the crossbar. It was much better from the Dons and certainly an attack to offer encouragement for the rest of this game. However, Accrington struck a second goal on the hour, which came against the run of play in the second-half. Wimbledon gave away a corner through careless play at the back and worse was to follow. The subsequent flag kick was only half cleared, allowing another cross to come in. Though Tom Soares cleared, the ball fell to Sean McConville and there was a huge slice of fortune about the goal as his toe-poke took a wicked deflection and left McDonnell with no chance.

Despite suffering such misfortunate, Wimbledon’s players refused to feel sorry for themselves and it was game on four minutes later when Wagstaff reduced the arrears. After receiving a pass from Trotter, Wagstaff produced a fine run towards the box, before cutting inside and curling home a lovely strike into the top corner. It was a completely different game now and another substitute Jake Jervis, who came on for Mitch Pinnock, almost earned an equaliser with a low strike that Ripley did well to save. Jervis caused a lot of problems down the right after entering the fray and he showed lovely play to create space for a shot, but his shot was saved by the legs of Ripley, who then watched in relief as the subsequent cross from Jervis was diverted wide by Wagstaff.

Though Kee shot wide in the latter stages, Wimbledon came so close to an equaliser when Pigott’s acrobatic volley was cleared off the line in injury-time. However, Accrington just survived and it completed a difficult past week for Wimbledon.

AFC Wimbledon are back on the road again on Saturday with a League One match at Accrington Stanley and you can buy tickets on the day.

The Dons return to the Wham Stadium for the first time since that memorable play-off semi-final second leg in 2016 and your support will be appreciated by Neal's boys in pursuit of important League One points.

Wimbledon supporters can pay on the day for this game at the away ticket office, situated in the blue cabin close to the away turnstiles (also where you can collect pre-booked tickets).

All Under-12s must be accompanied by an adult.

Disabled supporters pay the full price appropriate for their age category. If a carer is required, they will be admitted free of charge. Contact the club on 020 8547 3528 for more information.

Dons fans will be accommodated on the open Coppice End terrace and in Block A of the seated and covered main stand. 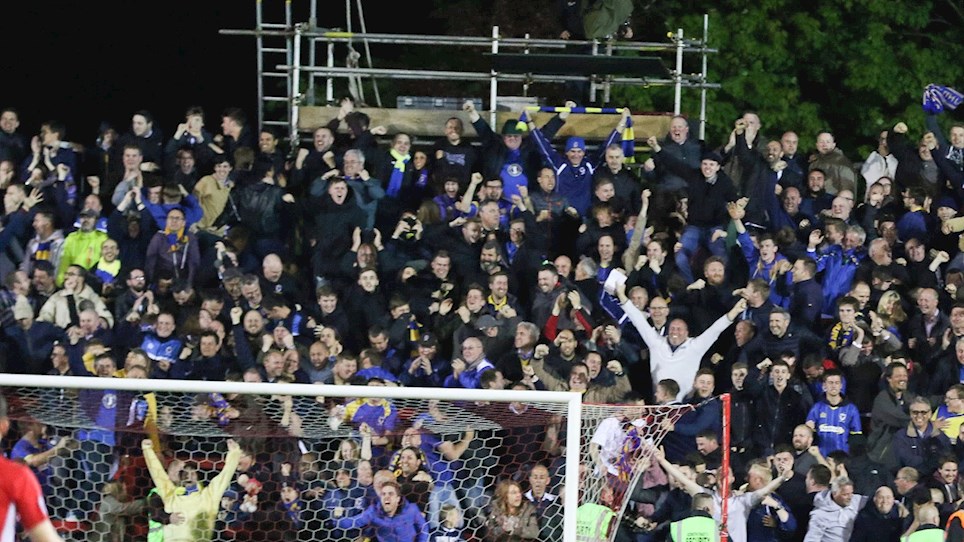 Tickets and travel: The Dons head back to Accrington