Neal Ardley said that tonight's match is an opportunity for players selected to keep their places for the League One match at Accrington Stanley on Saturday.

The manager was far from happy with the manner of defeat against Scunthorpe on Saturday and he wants players to stake their claims for selection by producing a positive performance against Swansea Under-21s.

"It is a chance for whoever gets in the team to tell me that they want to be picked," said Neal. "Anyone selected is playing to see if they can get into the team for Saturday's game. There are too many people making the same mistakes. People need to step-up and do their bit. You can say everyone is allowed to make mistakes, they are, and that's football, but we are making mistakes and it's a goal from them. We need to work on them on the training field and we need to be ruthless with our team selection. You need to earn your place in this team."

An encouraging performance at The Valley in Wimbledon's Checkatrade Trophy opener earlier this month helped spark a much-needed league win at Gillingham. The penalty shoot-out victory against Charlton earned two points for Wimbledon after a 2-2 draw and victory tonight would edge the Dons closer to making the knockout stages.

Swansea Under-21s were beaten 5-0 in their opening match by Stevenage and they need a win tonight to keep alive their hopes of progressing from the group.

A summary of player eligibility for EFL clubs in the Checkatrade Trophy is below:

• A club can play any goalkeeper in the competition;
• The revised requirement of Rule 7.3 – '4 qualifying outfield Players from 10'.
A qualifying outfield player would be:
Any player that meets the current criteria (excluding goalkeepers), includes those who:
• Have started the previous or following first team fixture.
• Are in the top 10 players at the club for starting appearances in league and domestic cup competitions for the current season.
• Have made 40 or more first team appearances in their career.
• Are on loan from either a Premier League or Category 1 academy club.

An 89th minute winner from Aaron Lewis secured a 1-0 win for Swansea Under-21s at the Cherry Red Records Stadium after the Dons had failed to capitalise on superior possession and chances.

The visitors deserved credit for staying in the game and earning the chance to take a League One scalp, but it was another example of Wimbledon squandering countless opportunities in front of goal.

Neal Ardley selected a strong side for this second group match in the Checkatrade Trophy with Rod McDonald, Scott Wagstaff, Tom Soares, and Joe Pigott all retained from the side that started against Scunthorpe on Saturday.

All of the rest of the outfield starting 11 had played League One football this season, apart from Tommy Wood, who was making his full first-team debut after signing in the summer. Joe McDonnell was given an opportunity between the sticks for the second time this season after his penalty-saving heroics at The Valley in the first Checkatrade Trophy match.

AFC Wimbledon made a swift start against the Swans, putting pressure on their much younger opponents from the outset. It didn't take long for the Dons to threaten with Tom Soares heading just over, before a shot from Toby Sibbick arrowed wide of the far post. Wagstaff showed plenty of attacking verve down the right early on and his cross set-up an early chance for Pigott, but his header lacked power and it allowed Swansea keeper Steven Benda to gather the ball comfortably. Pigott returned the favour with a lovely ball to find Wagstaff in space on the right, but his shot was well saved by Benda. At the other end, Swansea threatened for the first time when Botti Biabi headed over the crossbar.

With the midway point of the first-half approaching, the attacking momentum continued from Wimbledon and Wood started and finished a lovely move involving Wagstaff, but his volley was well blocked. As the first-half wore on, Swansea's youngsters started to become more confident and they came close to the opener through Aaron Lewis. The full-back showed good footwork to find space on the right inside the area and his powerful drive was superbly saved by McDonnell, who was at full stretch to turn it around the post. Wimbledon almost secured the opener when Benda dropped Tyler Garratt's cross and the ball fell nicely for Mitch Pinnock, but the Swansea keeper got back well to save.

The half-time score of 0-0 was certainly an encouraging score-line for Swansea's young team and Wimbledon had to try and recapture the high tempo from the start of this game. Neal Ardley made his first change at half-time with Tom Soares withdrawn and Liam Trotter taking his place in the heart of midfield. Anthony Hartigan attempted to take matters into his own hands early in the second-half, but his shot from distance flashed over the crossbar. The Dons put together a lovely move when Trotter and Pinnock combined well down the left and the latter's cross was met by Wagstaff, but his header was over the crossbar.

Wimbledon made a second change just after the hour with Andy Barcham entering the fray for Joe Pigott. The Dons were finding it difficult to break down a resolute Swansea defence and the visitors threatened at the other end when Biabi found space in the area, but McDonnell did well to save the effort. Wimbledon's best chance of the second-half so far arrived in the 76th minute when Pinnock sent over a lovely cross from the left that found Will Nightingale, but he volleyed over the crossbar from close-range. At the other end, Swansea threatened to snatch victory when Jacob Jones crossed to the far post for Liam Cullen, but he headed over.

As we entered the latter stages, Wimbledon were struggling to conjure up a winner with Swansea having defended doggedly. And there was a sting in the tail for Wimbledon in the 89th minute as Swansea snatched a late winner. Will Nightingale was penalised for a foul just outside the box and the free-kick was taken short to Lewis, who curled home emphatically from just outside the area.

Neal Ardley's men take on Swansea Under-21s aiming to secure more points in the competition after earning two from the opening game at Charlton, thanks to a penalty shoot-out win (Mitch Pinnock is shown above successfully converting his spot-kick).

Please note that the ground will open for supporters at 6.45 pm tonight, so you will not be able to gain entry to the inside of the stadium until this time.

Below is a summary of ticket prices and other match arrangements:

It will be pay on the day and we will only be opening the Paul Strank Stand for this fixture.
Please note this will be cash-only and tickets will be sold from the ticket booth in the main foyer.

The main bar will be open from 5.00 pm and we will be pleased to welcome Swansea City supporters into the bar area.

A wide selection of drinks will be served, including the following real ales:

The catering unit between the Paul Strank Stand and the Chemflow End will be open tonight, selling hot and cold snacks, plus drinks. 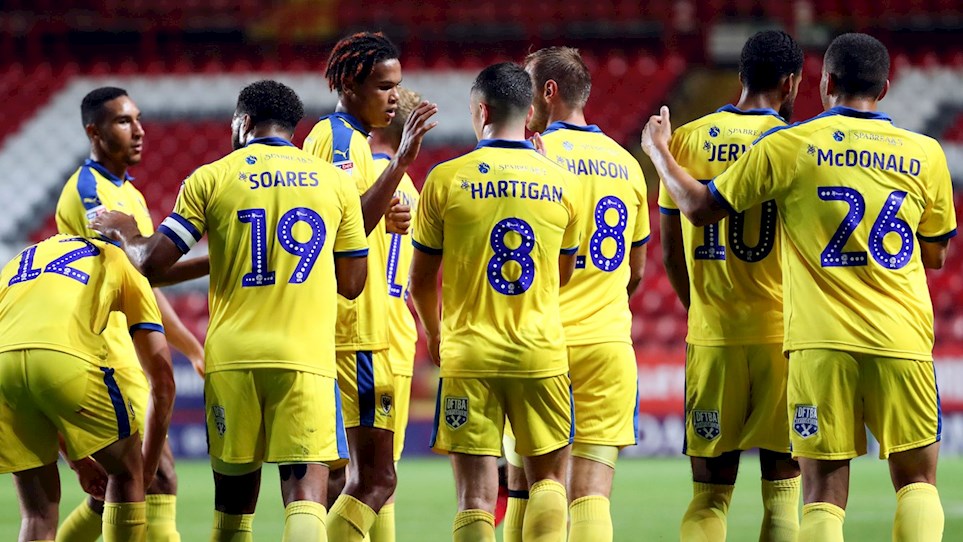