Simon Bassey has praised Joe Pigott's impact, as the Dons head to Staffordshire this weekend with extra firepower.

Our season-long loan signing from Luton comes into contention, with Simon keen to add to creditable performances in defeat against both Sunderland in the league and West Ham in the Carabao Cup. Although the Dons had nothing to show for it, the performances offered encouragement to get back among the points at the Pirelli Stadium on Saturday.

Burton are adjusting to life back in League One, following their relegation from the Championship last season. Although it's still early on in the campaign, Nigel Clough's team have slipped into the relegation places. However, they dispatched previous winners Aston Villa 1-0 in the League Cup in midweek and Clough has been very active reinforcing his squad before the loan window closed.

Goalkeeper Brad Collins from Chelsea, Southampton midfield duo Jake Flannigan and Jake Hesketh, and Wigan striker Devante Cole have all arrived at Burton in the past couple of days.

Below are a few snippets from Simon Bassey's iFollow interview, plus quotes from Burton manager Nigel Clough, and stats ahead of the game.

"I don't think many would have seen them struggling so early in the league. Nigel Clough has done a fantastic job there. To bed them into the Championship and keep them there was an amazing achievement by him. Last year they ended up coming down, so sometimes it takes a little bit of time to adjust. With the turnover of players they've had to change a lot this year and sometimes it takes a little bit to get going. I'm sure he'll continue to do a brilliant job there at a really well-run club."

"Credit to Joe; it's alright you telling him he's got to go away and put in the hard work, but he's certainly done that. We watched Joe for five years, maybe more, there's a player in there and we knew that. Once you drop into non-league sometimes it's hard. You're used to training full-time (with Charlton), you go training part-time on Astroturf (at Maidstone) and it's difficult. You can pick up bad habits and fitness is huge, especially for a centre-forward.

"They are small club like us and Accrington. We know how hard it is to operate and Neal Ardley has done very well with them. There's a lot of experience in the team as well. They are more than capable. They have put together a very good team that will cause us problems. I just hope we can play somewhere near as well as we did against Aston Villa. If you want to highlight what good League One teams do then look at Wimbledon, the pressure and getting no time on the ball, and they are still a threat."

Form guide (last six in all competitions, starting with most recent)

Top scorers (in all competitions)

Wimbledon beat Burton 3-0 in a pre-season friendly between the sides at the Cherry Red Records Stadium in July of last year. The last competitive meeting between the two teams was in February of 2015 in League Two, when the two sides were involved in a goalless draw at the Pirelli Stadium.

Tickets will be available on the day, but prices increase by £2. Dons supporters will be located in the covered and seated Carling Stand for this game.

Prices will be as follows:

Tickets ordered online after midday Wednesday 29 August can be collected from the ticket booth at the Pirelli Stadium next to the Burton Albion club shop.

International subscribers can view a stream of the game and commentary provided by our WDON team. Domestic subscribers to our iFollow Dons premium service will be able to listen to commentary of the game. Visit our designated iFollow page for more information.

The 3-0 score-line did flatter Burton with Wimbledon squandering chance after chance to get back into it on the day. However, Neal Ardley's men paid the price for a slow start and Burton needed no second invitation to grab the initiative in this match at the Pirelli Stadium.

Neal Ardley made six changes to his starting line-up after the gallant Carabao Cup exit to West Ham. Tennai Watson, Ben Purrington, Will Nightingale, Scott Wagstaff, Anthony Wordsworth, and Kwesi Appiah all earned recalls in place of Toby Sibbick, Tyler Garratt, Rod McDonald, Mitch Pinnock, Anthony Hartigan, and James Hanson. Jake Jervis was on the substitutes' bench just a day after signing for the Dons on loan. Burton had certainly been busier than Wimbledon on loan transfer deadline day as they brought in four new players, including Chelsea defender Bradley Collins.

Burton came into this match on the back of a morale-boosting Carabao Cup win against Aston Villa and they made a swift start, pushing the Dons back early on. The hosts had the first meaningful chance in the 13th minute when a ball through the middle from David Templeton put Liam Boyce through and he did well to hold off Deji Oshilaja, but his shot was over the crossbar. Wimbledon were almost punished for slackness at the back shortly afterwards when Oshilaja delayed a clearance and it resulted in Scott Wagstaff giving away a free-kick just outside the area. It was a good free-kick opportunity for Burton just 20 yards out, but Scott Fraser shot against the wall.

Wimbledon struggled to contain Burton early on and the hosts had a great opportunity in the 21st minute when Scott Fraser was played in on the left flank, but he dragged his shot wide. It wasn't until midway through the first-half that Wimbledon showed signs of emerging as an attacking force. Wagstaff found space after the referee played advantage for a foul on Liam Trotter and his shot from 30 yards was a good one too, but Burton keeper Bradley Collins palmed away his powerful drive.

With Burton having had the better of the first-half, it was no surprise when they opened the scoring in the 34th minute. Purrington cleared a cross into the box, but Wimbledon's players reacted too slowly and Stephen Quinn took full advantage by striking a powerful volley that left Tom King with little chance. A spirited response to that setback followed from Wimbledon and Appiah twice came close to equalising in quick succession. First, his shot from close-range was deflected onto the crossbar, and then Tennai Watson picked him out with a cross to the back post, but he headed it agonisingly over the crossbar. Wimbledon were still in the game at 1-0 down when the half-time whistle shrilled, but more urgency was required in attack.

Wimbledon started the second-half on the front foot and Wagstaff once again threatened to make a difference, but his shot was just over the crossbar. It was much better from the Dons now and two big chances in succession followed for Wimbledon. They could not have fallen to a better player for Wimbledon with top scorer Joe Pigott on the end of both of them. However, his first effort after being put through by strike partner Kwesi Appiah was deflected over and then he headed over from close-range after getting on the end of a well delivered corner from Anthony Wordsworth.

Despite the improvement, Burton doubled their advantage in the 54th minute. Will Nightingale lost out to Liam Boyce in a battle for the ball and the Burton striker square squared it to David Templeton, who made no mistake from close-range. With the Dons now committing more men forward, Burton extended the advantage to three on the hour. The hosts found space on their left to get in a cross and Boyce met it well with a powerful header. There was a double change straight after for with Jake Jervis coming on for his debut in place of Kwesi Appiah and James Hanson entering the fray for Scott Wagstaff. The two substitutes combined to almost pull one back when Hanson headed on for Jervis, but his shot was well saved by Collins.

As we entered the last 15 minutes, Mitch Pinnock was introduced for Tennai Watson, but still the chances continued to be squandered by Wimbledon with Pigott striking wide from close-range. Though Wimbledon continued to press for a goal back with Hanson firing wide of the target, there was no way back for the Dons and next up is another away match with a Checkatrade Trophy group game at Charlton Athletic.

AFC Wimbledon are back in League One action on Saturday and you can book your tickets and travel through the club.

Dons supporters will be located in the covered and seated Carling Stand for this game (3.00 pm kick-off) at the Pirelli Stadium.

The following prices are for tickets bought in advance:

Buy now from our online ticket shop. Tickets ordered online after midday Wednesday 29 August can be collected from the ticket booth at the Pirelli Stadium next to the Burton Albion club shop.

Please note that tickets can be bought on the day but all ticket prices increase by £2 on a match day.

Prices are the same as above for wheelchair users with carers admitted free of charge. Contact the club on 020 8547 3528 for more information.

This will pick-up from opposite South Wimbledon tube station at 9.00 am and from the Cherry Red Records Stadium at 9.30 am. The price is £26. Contact the number above to reserve a place. 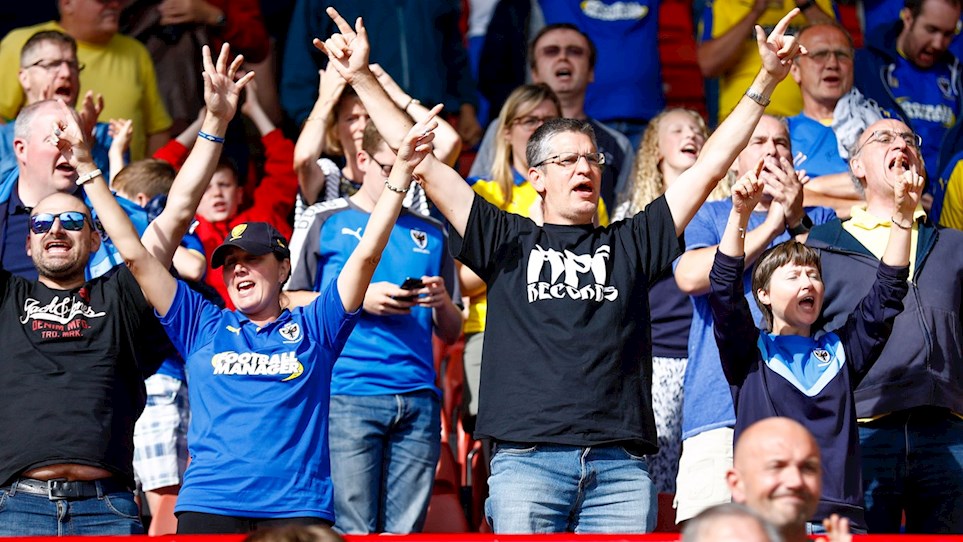 Tickets on sale for Burton Albion away