Neal Ardley will choose a strong squad for Wimbledon's first Checkatrade Trophy match this season and he is eager for his players to rediscover the winning habit.

Following the defeat at Burton Albion, Wimbledon tonight face a Charlton Athletic side with three points more in the League One table after their 2-1 win at Southend United on Saturday.

Lyle Taylor, one of our Wembley heroes from 2016, struck the winner in that match, but it's unclear if he will be involved with Charlton manager Lee Bowyer set to shuffle his pack.

The match at the Valley is the first group match for Wimbledon in the Checkatrade Trophy with the Dons also having home matches against Swansea Under-21s (18 September) and Stevenage (6 November).

Asked about his approach to the match tonight, our manager said: "We have a 21-man squad and that's the squad for all competitions. We will be using this squad for Tuesday and for Saturday. It will be as strong as it needs to be (for the Charlton game). At the moment we have to learn how to win games of football. It is a young side, we've reduced the average age of the squad, but we have a team that wants to play with energy, tempo, and belief. We didn't do that in the first-half on Saturday. I had been disappointed with the results, but it was the first time I had been disappointed with the group. The key thing through all of this is that we move on and get the momentum going again."

A summary of player eligibility for EFL clubs in the Checkatrade Trophy is below:

• A club can play any goalkeeper in the competition;

• The revised requirement of Rule 7.3 – '4 qualifying outfield Players from 10'.

A qualifying outfield player would be:

Any player that meets the current criteria (excluding goalkeepers), includes those who:

• Have started the previous or following first team fixture.

• Are in the top 10 players at the club for starting appearances in league and domestic cup competitions for the current season.

• Have made 40 or more first team appearances in their career.

• Are on loan from either a Premier League or Category 1 academy club.

Wimbledon supporters can pay on the night to attend this game (cash only at the South Stand Ticket Office). You can also collect pre-booked tickets from the same place.

You can listen to full match commentary of the game with our WDON commentators Mikey T and Rob Cornell providing coverage from The Valley. Access our iFollow channel to follow the game.

AFC Wimbledon started the Checkatrade Trophy campaign on a high tonight by getting the better of Charlton Athletic after a penalty shoot-out.

The 2-2 draw at the final whistle signalled a shoot-out and Wimbledon secured two points, one more than Charlton, after winning on penalties in this group match.

It was a very positive night for Wimbledon with several players coming into the side and performing well, particularly Tom Soares, who marked his return after injury with a stunning goal.

As promised in the build-up, Neal Ardley selected a strong squad for this Checkatrade Trophy match. Though the starting line-up contained plenty of changes, it was perhaps significant that James Hanson, Jake Jervis, and Mitch Pinnock were given opportunities. All three had entered the fray as second-half substitutes at Burton and tonight offered them a chance to show what they could do in attack with Wimbledon searching to add more goals. Terell Thomas came in for his competitive Wimbledon debut, joining Rod McDonald at the heart of defence, and Joe McDonnell was given an opportunity between the sticks.

In a start to this game that was far from high tempo, Wimbledon threatened to take the lead when Toby Sibbick's fine cross from the right picked out Hanson, but his header flashed wide. At the other end, Charlton started to find their stride after 15 minutes and tricky winger Mark Marshall sent over a lovely cross from the right that deserved to be finished off, but no one was able to get on the end of it. Then Charlton came even closer when Ben Reeves sent over a cross to the far post that George Lapslie met with a header, but McDonnell reacted well to save.

It had been an even encounter as we approached the midway point of the first-half and Wimbledon threatened when Hanson cut inside and tried his luck with a curler that just missed the crossbar. That was a sign of things to come as Wimbledon started to dominate and the opener arrived in the 27th minute. There was certainly a slice of fortune about it with Anthony Hartigan's strike taking a big deflection after he met Mitch Pinnock's corner, but it was a goal Wimbledon really needed after recent frustrations in front of goal.

Far from sitting on the one goal lead, Wimbledon put together a spell of really good football. One fine move ended with Tyler Garrett showing good tenacity to get in behind on the left and he picked out Thomas in the middle, but he fired over the crossbar. Scott Wagstaff also had an effort deflected just over, before Jervis headed the subsequent corner off target. Despite Wimbledon having taken a grip on the game, the half ended in disappointing fashion for the Dons with a Charlton equaliser three minutes before the break. A routine free-kick was swung in from the right and the ball was allowed to find Naby Sarr at the back post and he made no mistake from close range.

The second-half started with Wimbledon eager to take the game by the scruff of the neck once again and Tom Soares obliged in stunning fashion. The midfielder, who is not known for his goals these days, struck an unstoppable drive from 20 yards that arrowed into the top corner. It was his first Wimbledon goal since January and what a way to do it! A good response followed from the hosts and there was relief among the Wimbledon ranks when Igor Vetokele headed wide after a great ball in from Marshall. Reeco Hackett-Fairchild also headed wide as Charlton looked for a quick response.

Wimbledon continued to look a threat in attack with the energy of Wagstaff and Mitch Pinnock injecting plenty of life into Wimbledon's play. The hard work of Hanson and Jervis up front continued to cause problems and Pinnock almost made it three with a shot from the right that Charlton keeper Jed Steer was forced to beat out. With 68 minutes on the clock, Neal Ardley made his first change, introducing the pace of Andy Barcham for the remainder with Soares departing to a standing ovation from the Dons travelling support after his stunning strike.

There was a good chance squandered by Charlton with 12 minutes remaining when Kenneth Yao cracked a shot into the side netting, though he had set the chance up for himself with an impressive run down the right flank. It appeared that Wimbledon were coasting towards a morale-boosting victory in normal time, but Charlton substitute Jamie Mascoll changed all that. With little support for him in attack, Mascoll decided to try his luck and he let fly with a brilliant curler that left McDonnell with no chance.

The final whistle score of 2-2 signalled a penalty shoot-out and Wimbledon's players earned the extra point by showing their prowess from 12 yards, McDonnell showing his qualities too with the gloves.

It was an extra slice of entertainment for the 143 Dons in a crowd of 1,244, and maybe this will provide a platform to get back to winning ways in the league.

AFC Wimbledon's first group match this season in the Checkatrade Trophy is at Charlton Athletic on Tuesday night (7.45 pm kick-off) and tickets are available.

Dons supporters will be accomodated in the Jimmy Seed Stand at The Valley.

Buy in advance from our online ticket shop until 12.45 pm on Tuesday and you can collect at Charlton pre-match.

It will be possible for Wimbledon supporters to pay on the day at the same prices (cash only from the South Stand ticket office). 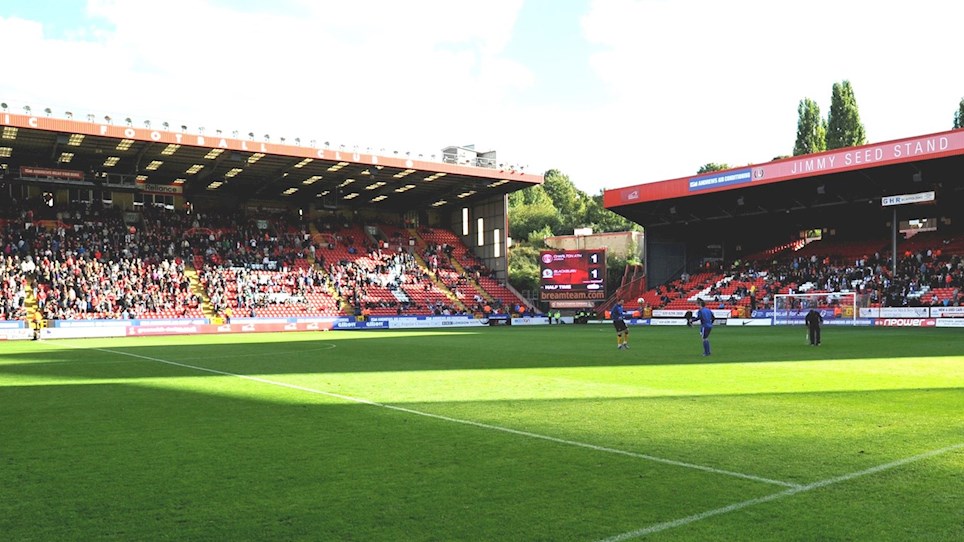 Tickets on sale for Charlton away