Wally Downes said he’s had a positive response from his players this week, as he seeks to guide Wimbledon to a first victory of the season on Saturday.

Since the midweek Carabao Cup defeat, Wally said that the focus has concentrated on tightening up at the back after three matches when his side have conceded two goals in each game so far.

Both Wimbledon and Accrington head into Saturday’s game seeking a first win of 2019/20, though the visitors have played a game less with their scheduled opener against Bury having been suspended.

Below are quotes from both managers, plus team news and more:

Wally: “All matches are worth the same three points, but at certain times some games are given more attention because of certain situations. We haven’t got a point yet, so there is a bit of pressure to win the game, but the two league matches we’ve played already were hard-fought games against very good sides. It’s a matter of keeping our shape, our confidence, and knowing the results will come if we keep applying ourselves correctly. Hopefully, it will be against Accrington on Saturday.

“You can’t keep 46 clean sheets all season, but we certainly need to get back to keeping them now and then. If the boys have got confidence in those at the back then they can go out and express themselves a bit more. We’ve certainly been trying to tighten up with the defenders this week. They know how important it is, we’ve had a couple of meetings already, and they’ve been very vocal with each other, in a good way. Hopefully, we will take that onto the pitch on Saturday.”

“It’s fabulous what they (Accrington) have done. With the crowds that they get and the money they are allotted for their budget, it’s excellent the football that John has got the team playing. He has done a fantastic job there.

“Both teams will be eager to put points on the board, so it should be a very good game. It’s been my mantra from the start that clean sheets are critical for us. If you get your defence sorted out, you’ve got one point. The longer you keep a clean sheet the more chance you have of winning. If we had kept clean sheets in our first two league games we would have got six points. Now that’s a harsh way to look at things, but it’s true."

Take a look at Wally's full interview ahead of the Accrington match by clicking on the link below.

"It's a big weekend for us, it's a chance to get back playing and I think the lads certainly showed signs of improvement on Tuesday from the Lincoln game, so if we keep on improving then hopefully our results will keep on improving.

"We know we're going to Wimbledon and we know it's going to be a tough game, we watched them last week and they posed Fleetwood lots of problems, so we know we've got our work cut out but we also know we're capable of posing anyone problems.

"They work hard for each other, similar to ourselves, they've got good attacking players and they've got solid defenders. We know it's going to be a difficult game, going away anywhere trying to get a result in any league is difficult, but we'll apply ourselves and we'll definitely go to win the game, we won't be shutting up shop to get a point.

"We need to score from open play, we got a penalty the other day, but we had chances against Lincoln and the other night, but unfortunately we didn't take them. We've got to be more dynamic going forward and try and make and take chances.

We let ourselves down with the supply on Tuesday, we couldn't beat the first man with a cross, but we're not the only team who struggles with that, supply is important but we've got to be ruthless with our finishing."

Captain Will Nightingale returned to training with the squad today, but he’s unlikely to figure in Saturday’s home game as he recovers from a knee injury. Goalkeeper Nathan Trott (groin) will come into contention for the match, having come through a development game yesterday, but midfielder Anthony Wordsworth will remain on the sidelines for now as he recuperates from an Achilles tendon injury. For Accrington, Ben Barclay faces a late injury check following Tuesday's defeat to Sunderland, with striker Offrande Zanzala set to miss out with a slight injury.

Our opponents so far this season

Accrington Stanley's season has so far consisted of a 2-0 league defeat away to Lincoln City and a 3-1 Carabao Cup loss at home to Sunderland on Tuesday. Stanley have only played twice with their scheduled opener against Bury having been suspended. John Coleman’s side ended up finishing in a creditable 14th place last season, Stanley staging a late rally after being in relegation trouble in the Spring.

Wally's boys earned what turned out to be a vital point in the battle to stay up when Stanley last visited the Cherry Red Records Stadium in April. Joe Pigott was on target in a 1-1 draw, as Wimbledon moved towards League One survival. Of course, the match will also bring back memories of those epic semi-final play-off clashes from 2016 when The Dons marched to Wembley by the narrowest of margins.

We have tickets available for the Chemflow terrace and the RyGas Stand (just £17 for an adult standing ticket). You can buy in advance from our online ticket shop until 11.00 am on Saturday or pay on the day. Tickets bought in advance can be collected pre-match from the white booth in Jack Goodchild Way.

We have had a lot of seat returns for this match. If you would like to order a seat ticket, please e-mail info@afcwimbledon.co.uk or contact the club on 020 8547 3528. Please contact us between 10 am and 12 noon on Saturday.

AFC Wimbledon will be aiming for an early season boost by getting that elusive first victory of 2019/20 on the board and Wally’s boys will be grateful for your support.

The Dons host John Coleman’s Accrington Stanley, a club that we’ve had many important battles with over the years, and both sides will be going all out for three points on Saturday.

Terrace tickets are still available to show your support for The Dons in our second home game this season at the Cherry Red Records Stadium.

Below is a summary of ticket availability and other match arrangements ahead of the game:

We have tickets available for the Chemflow terrace and the RyGas Stand (just £17 for an adult standing ticket). You can buy in advance from our online ticket shop until 11.00 am on Saturday or pay on the day. Tickets bought in advance can be collected pre-match from the white booth in Jack Goodchild Way.

We have had a lot of seat returns for this match. If you would like to order a seat ticket, please e-mail info@afcwimbledon.co.uk or contact the club on 020 8547 3528. Please contact us before 4.00 pm today (Friday) or between 10 am and 12 noon on Saturday.

Supporters are welcome to get here early to enjoy a drink in the bars and take in the lunchtime TV match between Arsenal and Burnley (12.30 pm kick-off). All the bars will open at 12 noon and we will be pleased to welcome Accrington Stanley supporters in for a drink. A wide selection of drinks will be available, including lagers, ales, and soft drinks.

Real ale lovers are in for a treat. In the pop-up bars, Wimbledon Pale Ale and Wimbledon Gold will be served. Wimbledon Copper Leaf Ale, Plough Lane Ale, and SW19 Summer Ale will be available in the Your Golf Travel Ale. Plough Lane Ale and SW19 will also be served in the back bar.

Saturday’s edition is packed with news, features and interviews all about your club. In our extensive main player interview, new Dons midfielder Callum Reilly talks about the highs and lows of his career, and why he decided to join Wimbledon instead of staying at Gillingham. Also included in this edition is an interview with Paul Osew after his midweek debut in the Carabao Cup. Older Dons supporters will enjoy the first of our interviews with former Wimbledon Player of the Year winners as we kick off the series by featuring John Leslie.

The Dons have two away games coming up next week with trips to Ipswich Town (Tuesday) and Sunderland (Saturday). You can buy tickets for both of these games and book places on the supporters’ coach before the Accrington match. You can do this at the complimentary tickets window before the game and for a short time afterwards.

Our valuable club fundraiser resumes on Saturday and look out for Golden Goals sellers around the ground for your chance to win £100. This season, there are some changes to Golden Goals, an initiative which is generously sponsored by Chemflow Total Solutions. Please refer to the Dons Trust website for more information on these changes.

Dons Trust members and fans interested in the work of the DT are welcome to pop in and find out more about the work of the Trust. This includes work that has been going on in relation to the new stadium during the summer. 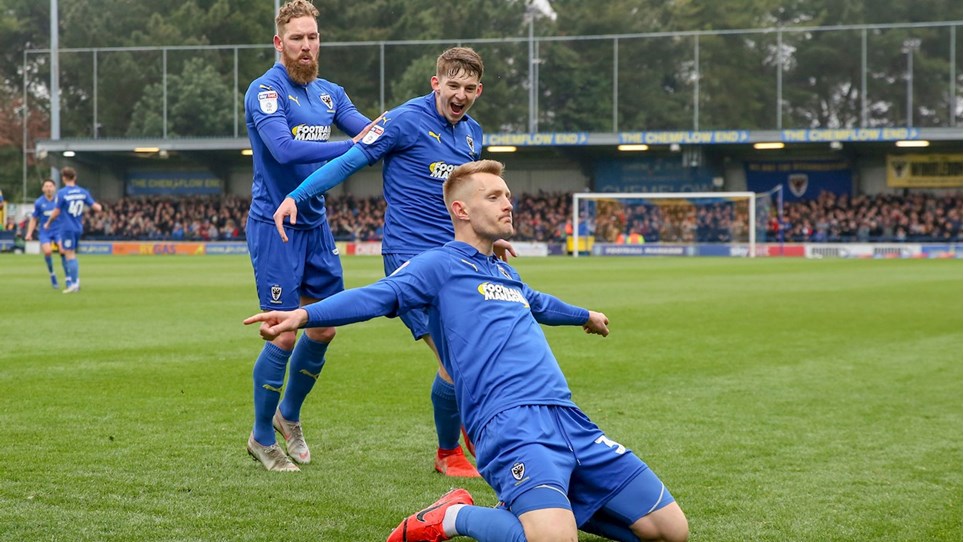 Watch The Dons return to league action versus Accrington


AFC Wimbledon will be aiming to get that all-important first victory of 2019/20 on Saturday - and your support can help Wally's boys to achieve that target.