At 1-0 down at half-time, it appeared that Wimbledon were set for another defeat against Doncaster, but second-half goals by Marcus Forss and Callum Reilly secured a 2-1 victory.

It was the perfect tonic for Wimbledon in the final home game before Christmas and that's seven points from the last nine, exactly what was needed to pull further clear of the drop zone.

Wimbledon came into this match seeking to build on four points from the last six in the league, but Glyn Hodges had to make an enforced change and it was a significant one too with captain Scott Wagstaff missing out due to a calf injury. That meant Joe Pigott took the captain’s armband with Shane McLoughlin replacing Wagstaff in midfield. At the back, there was a key change too with Rod McDonald making his first start since August after injury with Ryan Delaney having to settle for a place on the bench.

Though Doncaster had slipped down to 11th in League One, they presented a very difficult prospect for Wimbledon, particularly after knocking The Dons out of the Emirates FA Cup. In the opening exchanges, the visitors showed exactly why they had got the better of Wimbledon in the last meeting. Darren Moore’s men stormed forward at every opportunity from the first whistle and Doncaster’s top scorer Kieran Sadlier tested Nathan Trott in the very first minute. Trott had to make an even better save in the fifth minute when he dived to his left to tip a shot by Ben Whiteman wide. Rakish Bingham also struck a fine effort that Trott did well to keep out.

Judging by the start made by the visitors, it was no surprise when Doncaster marched into the lead in the 12th minute. However, the goal was a very disappointing one to concede from a Wimbledon perspective. A corner was swung in from the Doncaster right and Kwame Thomas was allowed too much space at the back post to head home. Wimbledon did respond by pressing higher up the pitch and playing at a higher tempo. Mitch Pinnock showed good skill to beat a couple of challenges and he appeared to be fouled in the box, but the referee thought otherwise. A first half chance followed for Wimbledon when Max Sanders swung over a cross that picked out Terell Thomas, but he headed wide.

As we progressed towards the midway point of the first-half, Wimbledon had at least established a foothold in this match after a poor start. McDonald had a chance after another Sanders corner was only half cleared, but he volleyed over the crossbar. Set pieces certainly appeared to be Wimbledon’s best route back into the game and Terell Thomas had another good chance, but he headed wide after another well delivered corner by Sanders. Wimbledon improved as the first-half progressed, but Doncaster retained plenty of threat and Whiteman volleyed wide after more good play by Sadlier. The visitors missed a gilt-edged opportunity a few minutes before the break when Sadlier set-up Ben Sheaf, who was clean through, but his shot was too close to Trott and he did well to hold the effort. The half-time whistle shrilled with Wimbledon perhaps fortunate not to be more than one down, though it had been much-improved after a shaky first 20 minutes.

Certainly, more was required from Wimbledon to get something from this match. Pigott and Forss had worked hard up front, but there had not been a hint of a chance for either of them in the first-half. Wimbledon increased the tempo at the start of the second-half with Pigott’s good hold-up play acting as a good platform for attacks. A fine move involving McLoughlin and Pinnock ended with Callum Reilly shooting wide of the target. The signs had been there that Wimbledon were growing into this game and an equaliser followed in the 56th minute. Forss showed good sharpness to get in behind the Doncaster defence on the Wimbledon left and he was fouled in the box by Donervon Daniels. It was a definite penalty, the referee having no hesitation in pointing to the spot, and Forss made no mistake from 12 yards with his powerful drive leaving Doncaster keeper Seny Dieng with no chance.

Glyn Hodges decided to make a double change on the hour with Nesta Guinness-Walker and Jack Rudoni replacing Paul Osew and Mitch Pinnock. There was relief in Wimbledon ranks midway through the second-half when Doncaster substitute Jon Taylor got in behind the home defence, though he had appeared to have shoved a Wimbledon defender out of the way to get there. The referee allowed play to continue though and Taylor’s pass almost picked out Sadlier in the box, but Trott did well to cut the cross out. Trott’s intervention became even more important with 20 minutes left when Wimbledon earned the lead. Forss showed admirable perseverance to chase down a long ball and get there first, before his pass picked out Callum Reilly, who finished superbly. Reilly deserved a lot of praise for showing so much energy to get up in support of Forss after such a quick break and it was a cool strike under pressure.

It had certainly been a thrilling second-half fightback by Wimbledon and the home faithful were creating a cracking atmosphere now, offering good support for the boys. It was certainly needed as Doncaster started to put pressure on and Wimbledon dropped deeper. A great chance followed for Taylor after he got on the end of a cross, but he rolled the ball wide from close-range. What followed was hardly backs to the wall from a Wimbledon perspective though, as the home defence stayed composed in protecting the lead. James Coppinger blazed over the crossbar in pursuit of an equaliser, but that was it from the visitors during the latter stages and Wimbledon held on comfortably. What a turnaround and what a pre-Christmas boost for The Dons - it was certainly deserved with that second-half display.

We still have terrace tickets available for the match versus Doncaster today and supporters can pay at the turnstiles before the game.

Due to a problem with the online ticketing system, supporters may have experienced difficulty in ordering tickets in advance.

We hope to have this rectified shortly with advance tickets available until 12 noon today. However, tickets for the RyGas Stand will be available to buy at the turnstiles before the match.

We apologise for any inconvenience you've had in trying to buy tickets. 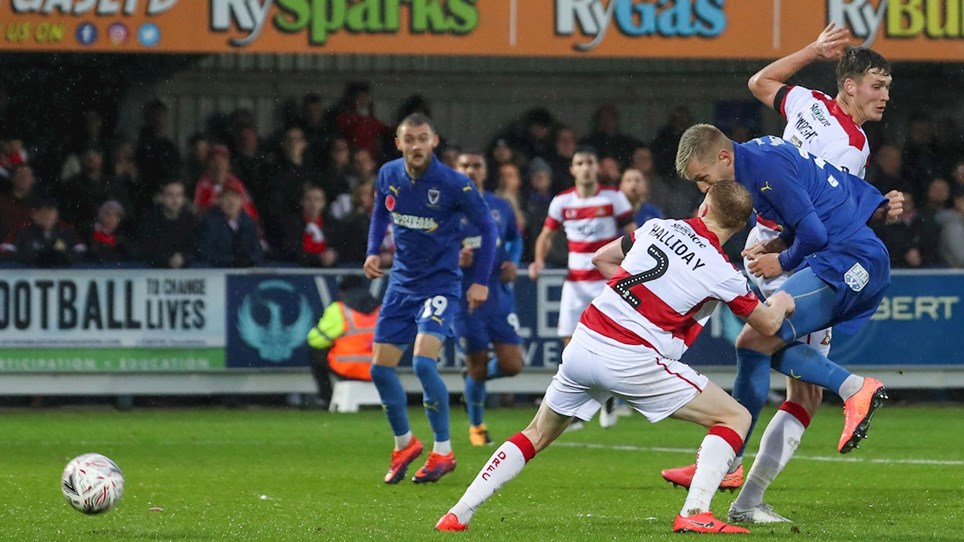 
AFC Wimbledon will be seeking the perfect early Christmas present of three important points on Saturday – and there’s still time to snap-up a ticket to watch The Dons.