In Wimbledon's final match of 2019, the hosts made a real game of it in the second-half with Joe Pigott scoring a cracking equaliser, but Mark Sykes struck to secure a 2-1 victory for Oxford United. The Dons had played very well in the second-half, showing plenty of conviction to come back into the game against an Oxford side that showed exactly why they are riding high in League One.

Glyn Hodges selected a completely unchanged squad for this match after the superb win at Bristol Rovers and that meant another landmark for 18-year-old Jack Rudoni, who made his full home debut. Oxford made five changes to the side that had beaten Lincoln City on Boxing Day. Both teams came into this match in good form, but wanting the points for completely different reasons. Wimbledon had an opportunity to move further clear of the drop zone after taking six points from the last nine against an Oxford side seeking to stay among the League One pace-setters.

Oxford started on the front foot and Alex Gorrin tried his luck with a shot from outside the box in the sixth minute, but Nathan Trott watched it all the way and saved comfortably. At the other end, Wimbledon threatened for the first time a couple of minutes later when Marcus Forss beat Oxford defender Elliott Moore to a through ball, but the visitors got numbers back to stop him. As the first-half progressed, Oxford dominated possession with former Liverpool midfielder Cameron Brannagan at the heart of it, but Wimbledon maintained a good defensive shape and restricted Oxford to very little in the first 20 minutes. A good Oxford move ended with Rob Hall sending a through ball in Jamie Mackie’s direction, but Nathan Trott got there first.

Though Joe Pigott had a goal correctly ruled out for offside in the 15th minute, it had been all Oxford in the first half an hour and the visitors took the lead in the 26th minute. It was a very unfortunate goal to concede as a cross from the right by Sam Long struck Shane McLoughlin at the back post and ended up in the back of the net, the Irishman unable to react quickly enough to do much about it. A difficult spell followed for Wimbledon as Oxford attempted to double the advantage. Mackie almost did that when he met a cross by Long with a fine volley that flashed inches over the crossbar.

After limiting the visitors to just the one goal, Wimbledon ended the half strongly and almost conjured up an equaliser. Max Sanders led the charge with his fine run on goal earning a corner that ended with Rod McDonald firing wide with an acrobatic attempt. Terell Thomas then came much closer when his header was just tipped over the crossbar by Oxford keeper Jordan Archer, who then saved Luke O’Neill’s header from the subsequent flag-kick. It offered encouragement to Wimbledon that the second-half could be different and it didn’t take long into the second-half for The Dons to restore parity. The equaliser arrived in great style too as O’Neill sent over a fine cross from the right that picked out Joe Pigott and he gave it the finish it deserved with a lovely volley.

Wimbledon had struck back barely a minute into the second-half, but the goal signalled a strong response from the visitors. Almost immediately, Hall struck a shot that appeared to have Trott beaten, but it was just wide, before Josh Ruffels struck a superb long-range effort that the on-loan West Ham keeper did well to save. Despite Oxford threatening to take the lead again, Wimbledon had started the second-half very strongly with Max Sanders and Jack Rudoni earning good possession in midfield. Oxford regained the lead though by producing a moment of quality that showed why they are so high in the table. Though it was slack marking from a Wimbledon perspective, it was a well-worked goal in its execution with Shandon Baptiste sending through a lovely ball that picked out Mark Sykes, who kept his cool to beat Trott with a clinical finish.

In an entertaining second-half, Wimbledon came close to a second equaliser when Pigott’s shot was turned away by Archer, who reacted well to get up quickly and save Jack Rudoni’s follow-up. Glyn Hodges made his first change with 20 minutes remaining as Terell Thomas was withdrawn due to injury and he was replaced by Ryan Delaney. As Wimbledon pressed for a second equaliser, that started to leave gaps at the back and a quick Oxford breakaway led to substitute Tariqe Fosu going through on goal, but Nathan Trott did well to save.

As we entered the latter stages of this match, Baptiste struck an effort that was deflected just wide. That meant Wimbledon still had a chance of snatching an equaliser late on and Glyn Hodges introduced Tommy Wood with three minutes left in place of Shane McLoughlin. Despite five minutes of injury-time and Wimbledon piling men forward, it was just not to be and The Dons have a quick chance to get back to winning ways at home to Southend United on New Year's Day.

Tickets for AFC Wimbledon's final match of 2019 against Oxford United have sold out.

All tickets for home areas have now been snapped up for Sunday's home game and Oxford United have sold out of their away allocation.

It therefore promises to be a cracking atmopshere at the Cherry Red Records Stadium on Sunday!

You can still buy tickets for the home matches against Southend (New Year's Day) and Peterborough (18 January). Visit our online ticket shop to buy. 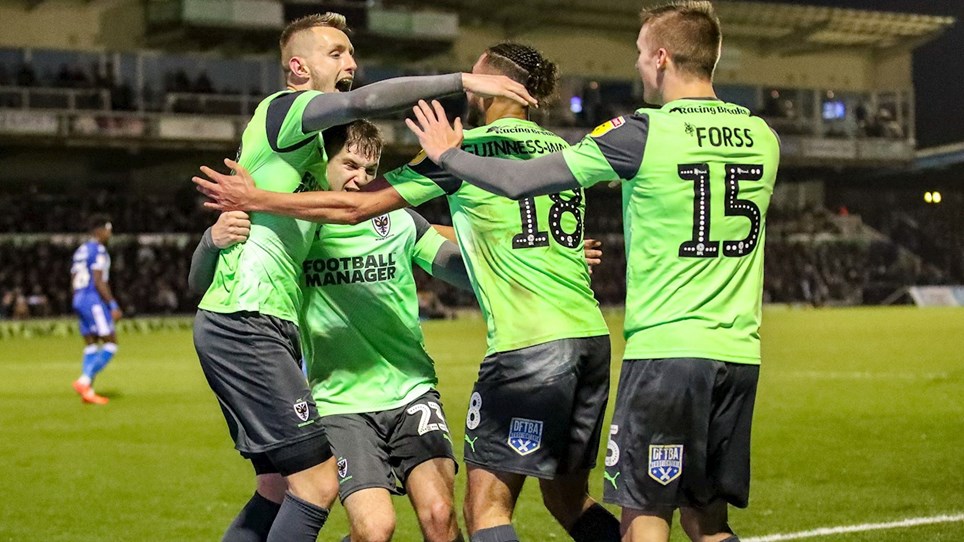 
AFC Wimbledon will on Sunday be aiming to extend an unbeaten home run that stretches back to September 21 and there’s still time to snap-up a ticket to watch The Dons.