AFC Wimbledon showed plenty of spirit and fight for the survival scrap ahead by digging in to deny Ipswich Town tonight.

On-loan Cardiff City keeper Joe Day made a string of impressive saves to earn a hard-fought 0-0 draw against a a side chasing promotion. Though Day made a big difference, plenty of credit must go to Wimbledon's defending on the night. Maintaining a good defensive shape and showing plenty of discipline, it meant that it was hardly backs-to-the-wall stuff from a Wimbledon perspective.

Glyn Hodges made two changes to his starting line-up after the narrow defeat against Fleetwood Town. Max Sanders was back at the heart of midfield after injury with Jack Rudoni having to settle for a place on the bench and Rod McDonald started in defence with Mads Sorensen not fully recovered from the head injury he suffered on Saturday. The two sides were looking for a much-needed victory for different reasons. Wimbledon sought the points to pull further clear of the drop zone in League One, but Ipswich needed a win to propel themselves back into the play-off spots. Though the Tractor Boys had suffered three successive defeats, those losses had come against promotion-chasers Peterborough, Rotherham, and Sunderland.

The match started with Ipswich enjoying the lion’s share of possession, without really threatening as Wimbledon soaked up pressure well, maintaining a good defensive shape. A first hint of a chance for Wimbledon came when Mitch Pinnock pressed high and won the ball well, before setting up Joe Pigott, but his shot was charged down. As we approached the midway point of the first-half, there was a clear pattern to this game with Ipswich dominating possession, without making much of an impression against a well-drilled Dons defence. There had been little end product from Ipswich in the first half an hour, but neither goalkeeper had been tested in the first third of this match. Mitch Pinnock and Joe Pigott had worked tirelessly up front and showed good touches at times, but Wimbledon had not been able to get enough players up in support to put any sustained pressure on.

Wimbledon’s midfield had worked very hard to press Ipswich with Callum Reilly’s tackling proving to be very useful. It had proven difficult for his midfield partners Sanders and Anthony Hartigan to get on the ball as Ipswich had so much of the possession. Sanders attempted to make things happen by dribbling past three challenges, but he was just stopped before making progress into the area. At the other end, Ipswich came so close to making the breakthrough in the 41st minute. James Norwood pounced on a half-cleared set-piece and struck a thunderous effort that crashed against the crossbar and away to safety. It was big relief for Wimbledon, especially as the near miss came so close to half-time.

It remained 0-0 heading into half-time and Wimbledon could take encouragement from limiting a promotion-chasing side to very little in the way of chances. At the start of the second-half, Ipswich continued to enjoy most of the possession, but Wimbledon held firm. Shane McLoughlin was tenacious with his tackling on the right side, showing commitment in abundance to stop his old club making progress. With 10 minutes gone in the second-half, Ipswich danger-man Norwood threatened to change matters. First, he struck a goal-bound shot that was well blocked by Rod McDonald, the ball deflected wide, and then Joe Day showed good reflexes to make a fine save from Norwood’s low drive. At the other end, Wimbledon had struggled to fashion a chance of note, but Terell Thomas almost found the key to the door when he powered through the middle and found Joe Pigott, but he was just unable to make the most of the half chance.

It needed superb goalkeeping by Joe Day to stop Ipswich taking the lead in the 67th minute. A loose pass out from the back was pounced upon by Norwood and he went through on goal, but Day was out quickly and spread himself well to deny the Ipswich striker. At the other end, Joe Pigott got on the end of a well delivered free-kick by Mitch Pinnock, but he headed it wide of the target. Wimbledon needed a simply superb save by Joe Day to stop Ipswich making the breakthrough, as he dived full length to his left to tip substitute Will Keane’s powerful drive wide.

In the final 10 minutes Ipswich continued to pour forward and Day was required to make another good save to deny Ipswich substitute Freddie Sears. The Dons were defending diligently to stop the pressure becoming too sustained and our supporters were playing their part by getting behind the team. As we entered three minutes of injury-time, Wimbledon earned a corner and though it was cleared, the attack ended with Joe Pigott shooting just wide. Despite Ipswich commiting men forward in the latter stages in pursuit of a winner, Wimbledon could even have snatched it when Joe Pigott shot just wide. The final whistle signalled a praiseworthy point for Wimbledon and an end to a two-match losing sequence, offering encouragement for the tough matches ahead.

AFC Wimbledon will be aiming to get an important win under the lights tonight against Ipswich Town (7.45 pm kick-off) and there’s still time to get your ticket for the big game.

Tonight’s match – our final Tuesday home game of the season – is all-ticket and you can buy online until 3.00 pm today.

Glyn’s boys will be aiming to push further away from the League One drop zone against an Ipswich side seeking to keep their promotion hopes alive. Your support can give the boys that extra edge in pursuit of a vital win.

Below are ticket details and other match arrangements for tonight’s game.

We have terrace tickets still available for the Ry terrace (just £17 for adults). All other areas are sold out. Buy from our online ticket shop until 3.00 pm today and pick-up pre-match from the white ticket booth in Jack Goodchild Way. Please note that you must have a previous purchase history (before February 1) to buy tickets for this match. This could be for tickets or merchandise from our online store. No tickets will be sold at the turnstiles.

To purchase your tickets online visit our ONLINE TICKET SHOP. The option to buy tickets for Ipswich will only become visible once you have logged into your account. If you have an issue buying a ticket for this game online, e-mail info@afcwimbledon.co.uk  or call 020 8547 3528.

Please let us know if you are an ST holder not planning to attend this game. It will enable us to make your ticket available to get more support for The Dons. E-mail info@afcwimbledon.co.uk  or leave a message on the club answer machine (020 8547 3528).

Wimbledon supporters with tickets for tonight's match against Ipswich Town can request an upgrade by contacting the club. For example, an upgrade would cover changing from a Child ticket you have purchased to an Adult ticket. Please email info@afcwimbledon.co.uk  before 5.00 pm today, including your name and contact number.

Momentum has gathered for the Plough Lane Bond with over £3.3 million raised and the organising team will be handing flyers out at tonight’s game. You can also chat to members of the team, who will be by the Dons Trust kiosk before the game, or after the match, in the bars. You can e-mail ploughlanebond@thedonstrust.org  to arrange a specific time to chat. Play your part in getting us back to our spiritual home! Capital at Risk. For full details, terms & conditions visit the Plough Lane Bond website. The bond is administrated & run by the Dons Trust.

Tonight’s edition features an extensive interview with Mads Bech Sorensen, who joined us on loan from Brentford recently. Find out what sport Mads turned his back on in pursuit of achieving his football dreams. There’s also an interview with 17-year-old right Huseyin Biler, who has featured in several first-team match squads this season.

Supporters are welcome to get here early and choose from a wide variety of drinks before the game. The bars will be open from 5.00 pm with drinks available including a selection of real ales. We will be pleased to welcome Ipswich supporters into the bar areas before the game. Below is a summary of ales and lagers available in the bars.

Wimbledon supporters have an opportunity to buy tickets for the away games at Rotherham, and Oxford United, and Gillingham. You can buy tickets for all three games from the complimentary tickets window before tonight's game. Places on the supporters’ coach can also be booked. 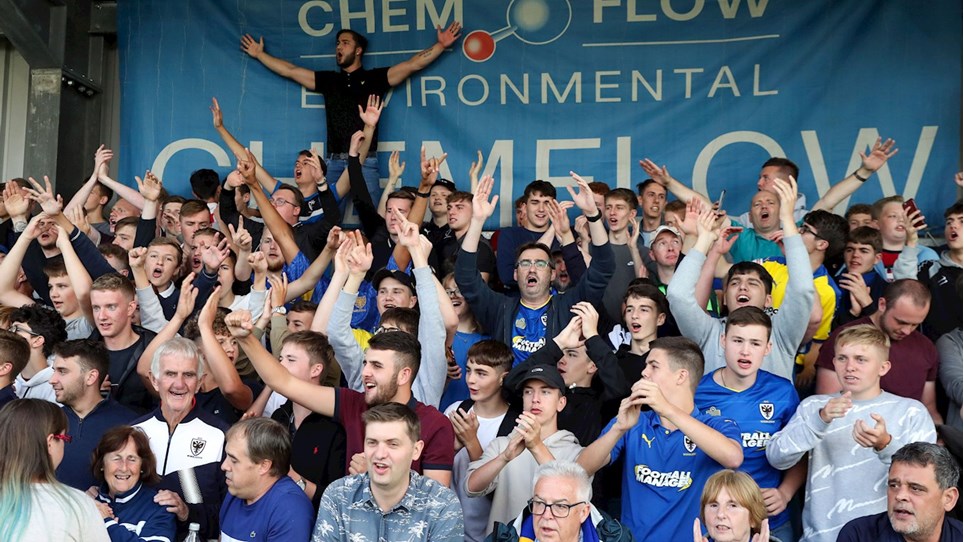 Upgrade your ticket for Ipswich match on Tuesday


Wimbledon supporters with tickets for Tuesday night's match against Ipswich Town can request an upgrade by contacting the club. 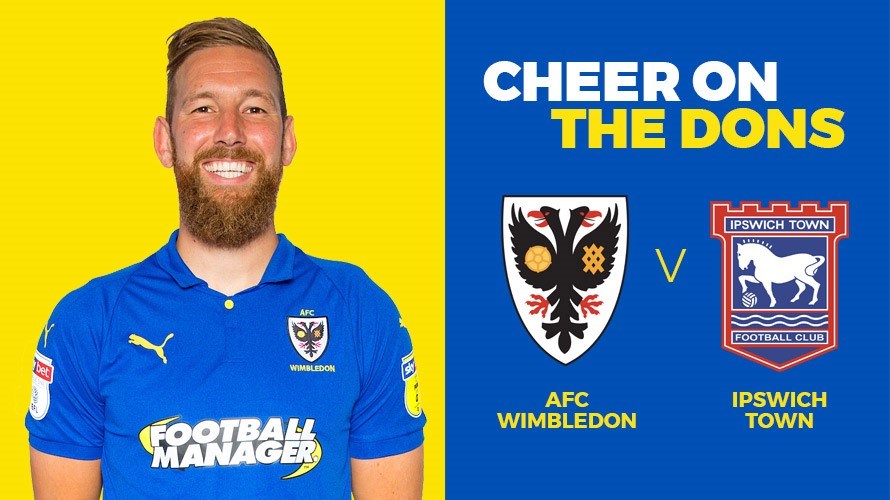 
The Dons take on Ipswich on Tuesday night, (February 11, 7.45 pm kick off) and terrace tickets are still available to buy online for both the Chemflow End and Ry Terrace.