AFC Wimbledon earned a last-gasp point at Rotherham today with a penalty by Kwesi Appiah denying the league leaders.

Substitute Appiah held his nerve to smash home the spot-kick and secure a 2-2 draw in South Yorkshire. Freddie Ladapo appeared to have won it for Rotherham, but The Dons showed plenty of spirit to fight back and earn a share of the spoils. It was reward for the 248 travelling Dons, who made the trip up north in terrible conditions. Our supporters had watched their team take a first-half lead with a brilliant strike by Max Sanders - his first Wimbledon goal - before Matt Crooks and Ladapo gave Rotherham the upper hand. However, The Dons showed character in abundance to hang in there and Appiah struck the all-important equaliser after Joe Pigott had been fouled in the box.

Glyn Hodges made three changes to his starting line-up after the 0-0 draw against Rotherham with Scott Wagstaff, Jack Rudoni, and Mads Sorensen recalled in place of Anthony Hartigan, Mitch Pinnock, and Rod McDonald. Sorensen was passed fit after recovering from a head injury, though he had to wear a mask to protect the wound on his forehead. The Dons came into this match knowing that a repeat of the solid defensive display against Ipswich in midweek was going to be needed to deny a Rotherham side in flying form at the top of League One.

The Dons made a bold start from the first whistle with Rudoni and Joe Pigott linking up to put Wagstaff through in the second minute and he found the back of the net, but it was ruled out for offside. That was a rare foray forward for Wimbledon during the first 15 minutes though, as Rotherham poured forward in numbers. Joe Day was called into action for the first time in the fifth minute when he reacted well to stop Chiedozie Ogbene’s shot from an acute angle and the Dons keeper got up quickly to stop the follow-up from Matt Crooks. There was an even closer call for Wimbledon in the 13th minute when Rotherham had the ball in the back of the net after a goalmouth scramble, but the referee ruled it out for a foul.

Joe Day was required to make a fine save in the 15th minute when he spread himself well to come out and stop former Dons loanee Michael Smith from opening the scoring. It had been all Rotherham in the first 20 minutes, but Wimbledon had shown fleeting moments of threat on the break with Scott Wagstaff, who was playing in a more advanced role, almost getting through on goal two or three times. It came against the run of play when Wimbledon took the lead on the half hour, but it was a goal worthy of gracing any stage. Paul Osew produced a lovely run down the left, before cutting the ball back for Sanders. There was still plenty of work to do when he took aim from 30 yards, but he produced a fantastic finish that went in via a post, leaving Rotherham keeper Daniel Iversen with no chance.

As we approached half-time, Rotherham pressed for an equaliser and Day was required once again to make a fine save to deny Kyle Vassell. Just before the break, Sanders was required to show his worth at the other end when he cleared off the line to stop Dan Barlaser’s corner from finding the net. It was so far, so good, for Wimbledon, as the half-time whistle shrilled with the visitors a goal up. The Dons had combined gallant last-ditch defending with threat on the break, most notably through that brilliant goal by Sanders.

The second-half opened with Rotherham on the attack once again and Wimbledon were forced to defend deep. There was relief for The Dons in the 56th minute when Smith won a header at the back post to give Vassell a great chance, but he headed over the crossbar. It was only a temporary reprieve for Wimbledon though, as Rotherham restored parity on the hour. A long ball through the middle put Wimbledon’s defence in trouble and Matt Crooks won the race to reach it first, before slotting home emphatically. Unsurprisingly, that lifted the mood amongst the home faithful as they sensed their team could complete the turnaround. The home fans were baying for a penalty when Paul Osew challenged Ogbene in the area, but the referee correctly thought otherwise.

Wimbledon showed good spirit after conceding the equaliser. It would have been easy to have fallen apart against the league leaders, but Wimbledon stayed strong at the back and almost secured the lead again. Jack Rudoni, who once again showed competence beyond his years in midfield, picked out Pigott, who showed good touch to make space, before striking a fine shot that was well saved by Iversen.

In a frantic finale, Freddie Ladapo put Rotherham back in front in the 81st minute, but that only provoked a response from Wimbledon that ended with that late equaliser. Pigott was brought down in the box and Appiah scored the penalty in emphatic style, blasting it into the roof of the net to silence the Rotherham fans. What a point for Wimbledon and it certainly offers encouragement for the tough challenges ahead.

AFC Wimbledon are back on the road again tomorrow with a League One match at Rotherham United and there's still time to get your ticket for the trip to South Yorkshire.

This is not an all-ticket match and you can therefore buy on the day, plus places on the supporters' coach can still be reserved (see details at bottom of this page).

Our supporters can buy from the away ticket office from 1.30pm. It will be cash only and there will be price increases of £2 (adult tickets) and and £1 (junior and concessions).

Any collections or duplicate requests will be available to collect from the away ticket office at that time. You can buy in advance from our online ticket shop (until 3.00 pm today).

Dons fans will be accommodated in the covered and seated Meditemp South Stand.

Supporters who are buying disabled tickets are entitled to a free carer ticket and tickets are to be charged at £13 for Adults, or at the relevant age band above. Contact the club on 020 8547 3528 for more information.

The supporters’ coach will leave from opposite South Wimbledon tube station at 9.00 am and from the Cherry Red Records Stadium at 9.30 am. Book a place by contacting the club office today on 020 8547 3528. 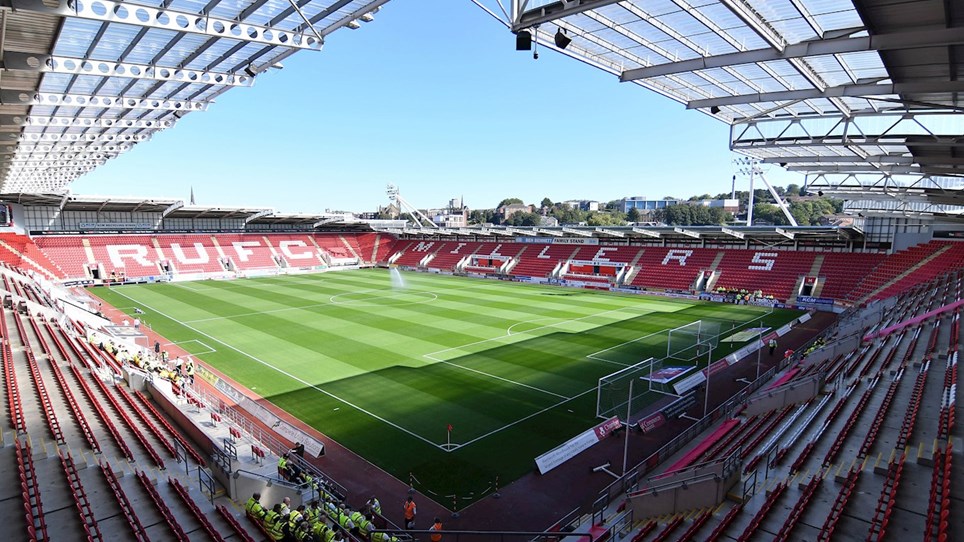 On the road with The Dons during February


AFC Wimbledon have three away games coming up during the remainder of this month and tickets are available in advance for all of these matches.