AFC Wimbledon came from behind twice to secure a fully deserved point against Burton Albion tonight.

In a thrilling 2-2 draw at the Cherry Red Records Stadium, Wimbledon hit back on two occasions through goals from Mitch Pinnock and Callum Reilly. It was a draw that was warmly received by the home support, as they watched their team show plenty of fighting spirit and no shortage of attacking verve to earn a share of the spoils.

Glyn Hodges made three changes to his starting line-up, as Wimbledon resumed the League One campaign after 10 days since our last game against Peterborough United. Goalkeeper Joe Day came in for his debut in place of Nathan Trott, Paul Osew was recalled at left-back with Nesta Guinness-Walker on the bench, and fit-again Jack Rudoni came in for Shane McLoughlin. Wimbledon were aiming for a second successive victory against an in-form Burton side that had risen up to ninth place in the table.

In the early stages, Burton showed just why their play-off ambitions are well and truly alive. Nigel Clough’s team are known for their expansive football and that was certainly in evidence from the first whistle. The opening goal followed for Burton and it was a significant moment for Joe Powell, who was making his first start for the club after signing from West Ham United. Lucas Akins found Jamie Murphy on the left and his cut-back picked out Powell, who slotted home a clinical finish from 20 yards out. From the visitors’ point of view it was a fine goal, but from a Wimbledon perspective it was all too easy as Burton were allowed time and space to conjure up the opener.

Anxious moments followed the opening goal for Wimbledon as Burton threatened to take the game beyond the hosts at an early stage. Powell had certainly found his range early on and he almost scored again with a shot that Day did very well to tip wide for a corner. It was Day’s first save in a Wimbledon shirt and despite conceding early on he showed his confidence by collecting a dangerous cross from the left. Wimbledon had to concentrate on maintaining a good defensive shape against a Burton team spreading the ball around effectively, but an equaliser came out of the blue in the 16th minute. It was a superbly executed goal though as Osew found Pigott and he sent through a lovely defence-splitting pass to pick out Mitch Pinnock. There was still plenty of work to do for Pinnock, but he showed impressive footwork to round Burton keeper Kieran O’Hara and finish from an acute angle.

The equalising goal offered an opportunity for Wimbledon to change the course of this match, but Burton responded really well. Stephen Quinn played a one-two with Akins and struck a decent effort that flashed just wide. Wimbledon’s best opportunities in the first-half came on the break and Scott Wagstaff sent through a ball from the right that just had too much pace on it for Pigott to collect and go through on goal. The visitors restored their lead in fortuitous circumstances in the 41st minute. A shot by Conor Shaughnessy was a complete mishit, but it picked out Jamie Murphy, who headed home clinically from close-range.

Wimbledon were quick to seek a second equaliser and it almost arrived on the stroke of half-time when Scott Wagstaff shot just wide from close-range. Vociferous appeals for a penalty from Wimbledon’s players for a foul on Wagstaff were turned away by the referee. Conceding so close to half-time was difficult to take, but there had been enough promise in attack to suggest Wimbledon could get back into this game in the second-half.

Glyn Hodges decided to make a half-time change as he turned to the experience of Anthony Wordsworth, who came on for Paul Osew. Burton danger-man Powell threatened to score again with a fierce angled drive that Day palmed away emphatically and shortly afterwards Mads Sorensen did very well to clear a dangerous cross from the left. Wordsworth wasted little time getting into the thick of the action and he had a goal-bound shot blocked after a short free-kick by Mitch Pinnock. In a very entertaining game at the Cherry Red Records Stadium, Wimbledon struck back again on the hour. It was the direct approach that paid off as a long throw-in by Mitch Pinnock found its way to the back post and Callum Reilly was in the right place to steer the ball home. It was Reilly's fourth Wimbledon goal and he has certainly shown the scoring knack in recent weeks.

The second equaliser signalled a big change in this game as Wimbledon started to pile forward at every opportunity. Almost immediately, Pinnock attempted an audacious overhead kick that flashed over the crossbar. Then Jack Rudoni almost got on the end of a cross by Scott Wagstaff, but it was just too high for him. Rudoni had certainly played well on his return to the team, showing his silky skills in the centre of the park and a willingness to battle for every loose ball. Shortly afterwards, Anthony Hartigan, who had continued his recent resurgence, fired just wide with a good shot.

Wimbledon had simply dominated this game since the equaliser and Joe Pigott came close to putting the home side in front with a shot from distance, before Pinnock had a shot deflected wide. Then came a real flashpoint in this match. With 15 minutes left, Pigott reached a through ball before Burton keeper O’Hara, who appeared to handle outside the box. However, referee John Busby thought otherwise and pointed for a corner with Dons players and fans baying for a red card as O’Hara had seemingly stopped a goalscoring opportunity illegally.

Though a late winner just wouldn't come for Wimbledon, it was a very encouraging draw as The Dons fought back valiantly. On this evidence, Glyn's boys have every chance of staying clear of the drop zone in the coming months.

AFC Wimbledon will tonight be aiming to build on that impressive victory against Peterborough by earning maximum points again and tickets are available to show your support for Glyn’s boys.

League One play-off chasers Burton Albion are sure to provide a stern test for a Wimbledon side that has lost just one match at the Cherry Red Records Stadium since September.

Below is a summary of match arrangements ahead of tonight’s game.

We still have terrace tickets available for tonight’s game. You can either buy in advance from our online ticket shop until 3.45 pm this afternoon (collection from the white ticket booth, next to the DT Kiosk), or pay on the night. All seat tickets have sold out.

Please let us know if you are an ST holder not planning to attend this game. It will enable us to make your ticket available to get more support for The Dons. E-mail info@afcwimbledon.co.uk or leave a message on the club answer machine (020 8547 3528).

Tonight’s edition features an extensive interview with 18-year-old midfielder Jack Rudoni, who talks about his rise through the academy ranks and a breakthrough campaign for him that has included making his full debut. We also catch-up with Nik Tzanev, who is enjoying an impressive loan spell at Sutton United. Packed with news, interviews, and features all about our club, it’s well worth adding to your collection, priced at £3.

Supporters are welcome to get here early and choose from a wide variety of drinks before the game. There are also options available for those supporters taking part in a ‘dry January’! You can choose from Becks Blue, Heineken (0 per cent) and Old Mout Berries & Cherries Cider (0 per cent). The bars will be open from 5.00 pm and below is a list of drinks, including real ales, that are available to choose from. We will be pleased to welcome Burton supporters into the bars before the game.

Wimbledon supporters have an opportunity to buy tickets for the away games at Accrington Stanley, Rotherham, and Oxford United. You can buy tickets for all three games from the complimentary tickets window before tonight's game. Places on the supporters’ coach can also be booked. 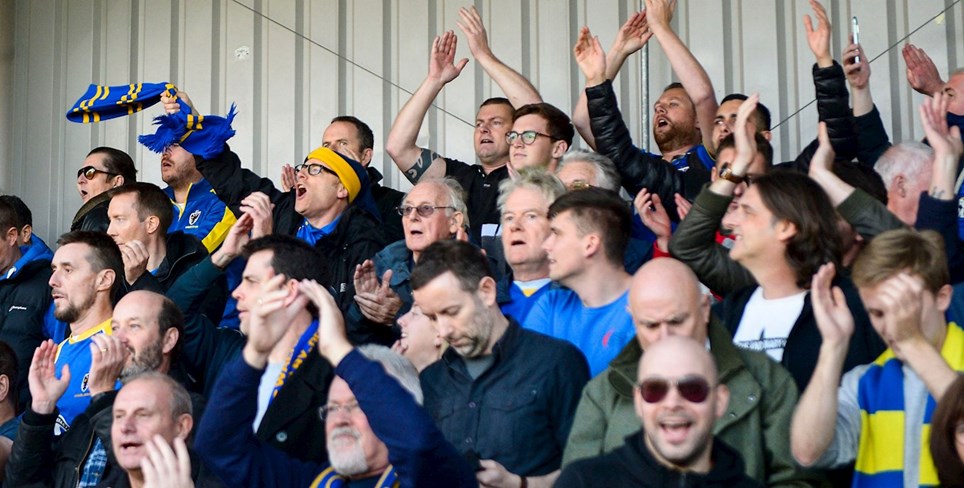 Don't forget! The Dons are back in action on Tuesday


We remind supporters that Wimbledon have no game this weekend, but there's not long to wait for our next Dons matchday!