Joe Pigott struck his fourth goal in five games to help Wimbledon to a first victory in 2020.

A clinical strike from Pigott proved to be the difference in a 1-0 victory, but the whole team deserved credit for showing spirit in abundance to defy Peterborough. Time and time again, the visitors threatened an equaliser, but Wimbledon defended valiantly. The full-time whistle, following six minutes of injury-time, signalled big celebrations from fans, staff, and players after such a hard-fought win.

Glyn Hodges made two changes to his starting line-up after the narrow defeat at Portsmouth. One of those was enforced due to the injury suffered by Marcus Forss, who subsequently returned to Brentford. Mitch Pinnock, who had set-up Joe Pigott’s goal at Portsmouth, earned a recall after his encouraging display at Fratton Park. The other change was a notable one as Mads Bech Sorensen came in for his Wimbledon debut in place of Rod McDonald.

Despite being without Marcus Maddison, who was left completely out of the squad as he seeks another club, Peterborough still had plenty of attacking threat in the forms of Mohamed Eisa and Ivan Toney. The former had the ball in the net a few minutes in, but his effort was correctly ruled out for offside. However, Wimbledon kept a good defensive shape with Sorensen fitting in well on the left of three centre backs. Sorensen quickly showed that he was up for the fight in a Dons shirt as he stood up to the challenge of Peterborough dangerman Toney.

Though Peterborough had the majority of possession in the first half hour, the better chances were created by Wimbledon. There was a good opportunity for the hosts in the 18th minute when Pinnock found space down the left and delivered a sublime cross to the back post that picked out Shane McLoughlin, who volleyed into the side netting with plenty of supporters thinking it had gone in. It was certainly a positive sign that Wimbledon could hurt the visitors. As the first-half progressed, Wimbledon started to gain the upper hand. Max Sanders, Callum Reilly, and Anthony Hartigan all enjoyed getting on the ball to get attacks underway. Indeed, Hartigan came close to making the breakthrough with a powerful drive from 25 yards that was well saved by Peterborough keeper Christy Pym.

There was a blow for Wimbledon in the 39th minute with Max Sanders having to go off injured and he was replaced by Anthony Wordsworth, who was thrust into his first match for two-and-half months earlier than expected. Wimbledon ended the first-half on top and an opening goal so nearly came just a couple of minutes before the break. Pinnock, who had been very impressive in the first-half, cut inside from the right and struck a lovely curler that Pym did well to tip wide. Wimbledon could be well pleased with the first-half performance as Peterborough had barely threatened and the hosts had fashioned the best chances.

Wimbledon started the second-half on the front foot with Pigott leading the line well. He did very well to earn a corner that almost earned the breakthrough for his side. Callum Reilly’s fine delivery to the near post was met by Sorensen, who directed a powerful header on target, but Pym made a superb save. It was so close to a debut goal for Sorensen, who had produced an impressive debut. A fine Wimbledon move almost produced the opening goal when Luke O’Neill’s fine cross picked out Pigott, who turned smartly before unleashing a shot that Pym did very well to hold. However, there was no reprieve for the visitors in the 58th minute, as Wimbledon deservedly earned the lead. Nesta Guinness-Walker popped up on the right side and delivered a ball in that picked out Pigott, who struck a clinical low drive to finally beat Pym.

It was a lead that Wimbledon had certainly warranted on the balance of chances created. However, the goal produced a stirring response from the visitors and they almost equalised seconds later. Trott was required to make a fingertip save to stop Toney’s looping header. Shortly afterwards, Wimbledon just about survived an equaliser in a goalmouth incident that required Luke O’Neill to receive treatment. Trott just about won a race to reach the ball first with Toney, but his clearance rebounded off the Peterborough striker and towards goal. However, a combination of a post and O’Neill, stopped the ball from crossing the line and Toney shot wide from close-range. It was all Peterborough after this as Wimbledon’s defending became a bit last-ditch.

A mixture of good defending and profligacy in front of goal from the visitors kept the score at 1-0. Szmodics had two great chances, but he shot wide with both and Trott did well to stop a shot by Toney from finding the net. Toney also headed wide with five minutes left as Wimbledon clung onto the slender lead. In a frantic finale, Peterborough peppered the Wimbledon box, but they were unable to strike a late equaliser. A first win in 2020 had certainly been hard-fought and it could be a very important victory in the battle to stay up.

AFC Wimbledon will be aiming for a first win of 2020 at the third time of asking on Saturday and tickets are still available to show your support for The Dons.

Mads Bech Sorensen (pictured) could make his debut after signing on loan last week from Brentford and a warm welcome to Wimbledon for the Danish Under-21 international will be greatly appreciated. We’ve had high demand to watch The Dons take on Peterborough this Saturday, so don’t miss out! Snap-up a terrace ticket in advance, or pay on the day at the turnstiles.

Ticket details and other match arrangements are summed up below:

All seat tickets are sold out and we only have a very limited number of tickets available for the popular Chemflow terrace. Buy in advance from our online ticket shop. Tickets are also still available for the Ry terrace (just £17). Buy online or on the day. Advance tickets can be purchased until 11.00 am on Saturday morning and they can be collected pre-match from the white booth in Jack Goodchild Way.

Please let us know if you are an ST holder not planning to attend this game. It will enable us to make your ticket available to get more support for The Dons. E-mail info@afcwimbledon.co.uk or leave a message on the club answer machine (020 8547 3528) before 12 noon on Saturday.

After the Man of the Match presentation on Saturday there will be a meeting for the Plough Lane Bond scheme and a Q&A in the Main Bar. This Bond is going to be absolutely crucial to our chances of completing the stadium construction on time, so please come along to hear more about it and ask the team who have set it up any questions.

There’s an extensive interview with our long-serving kit man Robin Bedford, who talks about his first experience in the role, which involved spending a day with our former manager Dave Anderson! There’s also a first programme interview with Mads Bech Sorensen, which includes the Danish defender discussing his ambitions at Wimbledon and how his move to England came about.

Kick It Out campaign

The home match against Peterborough has been designated as our Day of Action for Kick It Out, which aims to stamp out discrimination of all forms. Players will be wearing Kick It Out T-shirts on Saturday and supporters from both clubs will be encouraged to raise banners on the referee’s whistle before the game. Footballers from the club’s Education and Football programme will also be holding up banners when the players walk out onto the pitch. See our previous article for more details.

For supporters planning to travel in by train to Saturday's game, please be aware that engineering work is scheduled for the weekend. The London Waterloo to Clapham Junction, Wimbledon and Surbiton trains will be affected, meaning that no trains will serve Norbiton or New Malden at all.

If travelling from Waterloo, Vauxhall or Clapham Junction, there are services that run via Richmond and Twickenham to Kingston station. Otherwise, it is a bus replacement service from Clapham Junction through Earlsfield and Wimbledon to New Malden and Norbiton. For more information, visit the South Western Railway website.

Wimbledon supporters can get here in plenty of time and enjoy a drink or two pre-match as the bars will be open from 12 noon. There will be a wide selection of drinks available with all the usual lagers and real ales served. Supporters can watch the lunchtime kick-off on TV screens with Watford taking on Spurs (12.30 pm). We will also be showing the Newcastle versus Chelsea game (5.30 pm kick-off), but please note that this will not be shown in the Your Golf Travel Bar due to the meeting about the Plough Lane Bond scheme. You can watch it in the back bar or the Presidents Lounge. We will be pleased to welcome Peterborough supporters into the bar areas before the game.

Get your match day treats!

Young Dons supporters George Bond and Joe Tynan have made a big success of their new business venture! Their sweet stall will once again be open before Saturday’s game (from 1.00 pm until close to kick-off, based close to the back bar/entrance to the Chemflow terrace). Don’t leave it too late to get your match day treats! Funds will be donated towards the club.

Tickets for away game at Accrington

Wimbledon supporters have an opportunity on Saturday to buy tickets for the away game at Accrington Stanley (2 February). You can buy pre-match from the complimentary tickets window. Places on the supporters’ coach can also be booked. 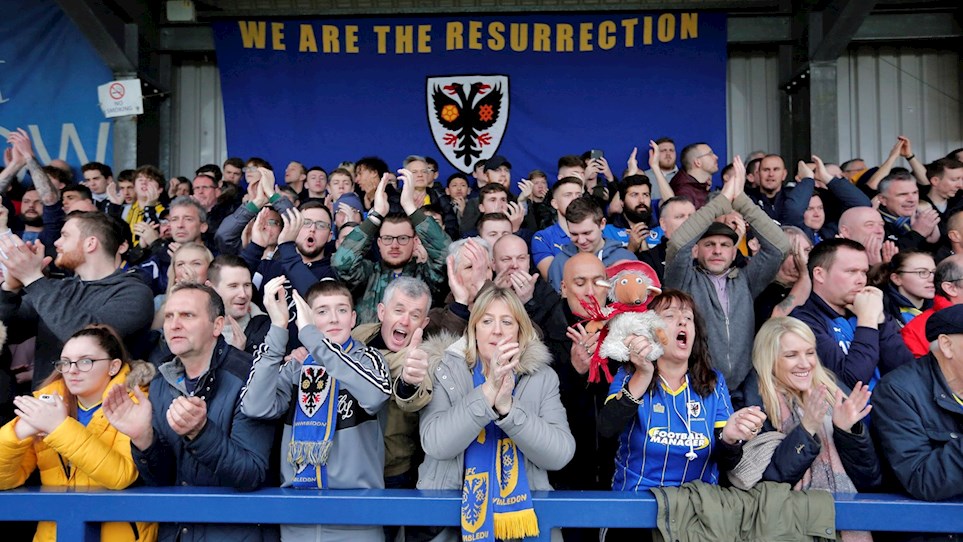 Help us get more support for The Dons


The Dons will on Saturday be aiming to secure a first win this year and we want to get as much support as possible for Glyn's boys.