AFC Wimbledon could progress to the knockout stages of the Leasing.com Trophy on Wednesday night and Glyn Hodges is set to offer young players a chance to grasp that opportunity.

With no game for Southend at the weekend due to international call-ups, Glyn is expecting his opposite number Sol Campbell to put out a strong side at Roots Hall, but our manager had been planning his approach to this game for some time.

Zach Robinson, Jack Madelin, and Finlay Macnab were all on the bench for the home game versus Doncaster on Saturday and with a hectic run of fixtures coming up they could get opportunities.

Speaking ahead of the match, Glyn said: “It’s probably a similar situation to when I first came in. I recognised that the Orient game and winning that after Rochdale would give us a bit of momentum. It was a key game and I think they will be thinking the same about tomorrow. They haven’t got a game at the weekend as their match at Southend has been called off due to international call-ups. I think they are going strong, but it will be a good experience and a good game. This is an opportunity to see where we are with our young ones. We’ve got some good young talent and hopefully they catch the eye tomorrow.

“It’s a good competition. We will take this as an opportunity to put some young ones in and blood a couple of young boys. It’s a taste for them. It’s a competition in which they will look at it every year and think ‘I can get a chance of getting in the first-team here’. If you look at it from the perspective of the Under-21s, they get to play with seniors so it’s a nice mixture. The closer you get to Wembley the more important it gets and it’s a good opportunity to blood the young kids.

“Everyone knows about the injuries last weekend and we’ve got the replay for Doncaster after the Blackpool game, so we’ve got three games in a week coming up. My thoughts are on preparing for all three and making sure that we give ourselves a chance of winning all three and that’s what we will be aiming to do. Will, Ryan, and Max are still out and no one has come back who missed Saturday. I’m hoping that a few more come back on Thursday or Friday to have a chance of making Blackpool, but they will not be ready for this game.”

Take a look below at Rob Cornell’s full interview with Glyn.

A goal from Tommy Wood in the first-half equalised for Wimbledon, but the hosts scored just before the break and added another in the second-half to win it 3-1. A late strike from Wood was controversially ruled out for offside, preventing a grandstand finish as Wimbledon attempted to stay in the Leasing.com Trophy.

The Dons starting 11 included three players making their debuts and the inclusions of regular starters Paul Kalambayi and Anthony Hartigan meant that five academy products were in the side.

As promised by our manager in the pre-match build-up, Glyn Hodges selected a starting 11 with a youthful edge as he handed full debuts to Jack Madelin, Ayoub Assal, and Jack Rudoni. Tommy Wood, who had been recalled from his loan at Leatherhead, was given a start alongside Kwesi Appiah up front. On his first start after injury, Callum Reilly filled the left sided slot of three centre-backs with Nesta Guinness-Walker and Kyron Stabana as wing-backs. With Southend desperately searching for a morale-boosting victory, Sol Campbell selected a very strong side.

Wimbledon started the match by establishing good possession, but it was Southend who offered the greater threat early on. Simon Cox tried his luck with a shot from just outside the area three minutes in, but Joe McDonnell got down well to save. Richard Taylor also struck an ambitious effort that McDonnell comfortably saved. At the other end, Madelin needed no second invitation when a shooting chance presented itself and his strike from 25 yards flashed over the crossbar. There had been little goalmouth action by time we reached the midway point of the first-half, but Southend marched into the lead in the 24th minute when a free-kick down  their left was only half cleared and Nathan Ralph smashed home emphatically from 25 yards out.

After taking the lead, Southend threatened to double the advantage when Ethan Hamilton shot just wide of the far post. At this stage, Wimbledon’s young side looked up against it, but a good response followed from the Dons. Tommy Wood almost notched the equaliser from close-range, but his effort was deflected wide. However, the forward didn’t have to wait long to strike his first competitive Wimbledon goal. Though Wimbledon’s initial corner was cleared, Madelin put the ball back into the danger area and Wood was in the right place to steer home for a real poacher’s goal. Wimbledon’s spirited response had certainly deserved an equaliser with a side containing plenty of youth having bounced back well.

It had appeared that Wimbledon were set to go in level at the break, but a moment of quality from the home side’s perspective restored the lead. A good move down the Southend left ended with Mark Milligan’s cross finding Ethan Hamilton and he fired home emphatically. The half-time score of 2-1 meant that Wimbledon would be out of the competition if the score stayed the same.

Wimbledon made a half-time change and it was a significant one with Zach Robinson entering the fray for his debut in place of Kwesi Appiah. Just minutes into the second-half, Southend had the ball in the back of the net, but it was ruled out for offside. McDonnell then had to react quickly to beat out a dangerous cross from the left, as Southend threatened to extend the advantage. A third goal so nearly arrived for Southend when Ralph crossed from the left for Cox, who met it well, but his volley was just wide. Jack Rudoni showed up well at times in the Wimbledon midfield as he got on the ball and used his silky skills to good effect. He tried his luck with a long-range effort from 30 yards that landed on top of the net.

With half an hour left, another Wimbledon academy product Finlay Macnab got a taste of the action, the midfielder making his debut in place of Ayoub Assal. Macnab was quickly involved and he played a part in a good Dons move that ended with Robinson shooting just wide. Robinson, who looked sharp after coming on, then came even closer when he latched onto a long ball and struck a fine volley that was deflected just wide. With 20 minutes left, another young Wimbledon player came on for his debut with Jamil Awoyejo, who had been recalled from Westside FC, aiming to make an impression.

Despite Wimbledon attempting to get back into it and showing no fear in pursuit of an equaliser, a third goal followed for the hosts. Southend substitutes Brandon Goodship and Tom Hopper combined and the latter poked home the cross to effectively seal it for the hosts. It was certainly a tough task now for Wimbledon’s youngsters to salvage something from this game, but they kept plugging away. Wood actually had the ball in the back of the net after getting on the end of a cross from Rudoni, but the referee’s assistant ruled that it was offside. The Dons striker had appeared to be onside, but there’s no VAR to refer to for a double-check at this level! Rudoni also had a shot deflected just over in the latter stages,but there was no way back for Wimbledon and it meant elimination from the Leasing.com Trophy.

AFC Wimbledon have an opportunity to reach the last-32 of the Leasing.com Trophy with a victory at Southend United on Wednesday night (7.45 pm kick-off).

We are not selling tickets in advance for this match and Wimbledon supporters will be able to pay on the night at the following entry prices:

A victory at Roots Hall will guarantee a place in the knockout stages for Wimbledon and the picture above shows Marcus Forss celebrating his hat-trick in the league win at Southend last month. 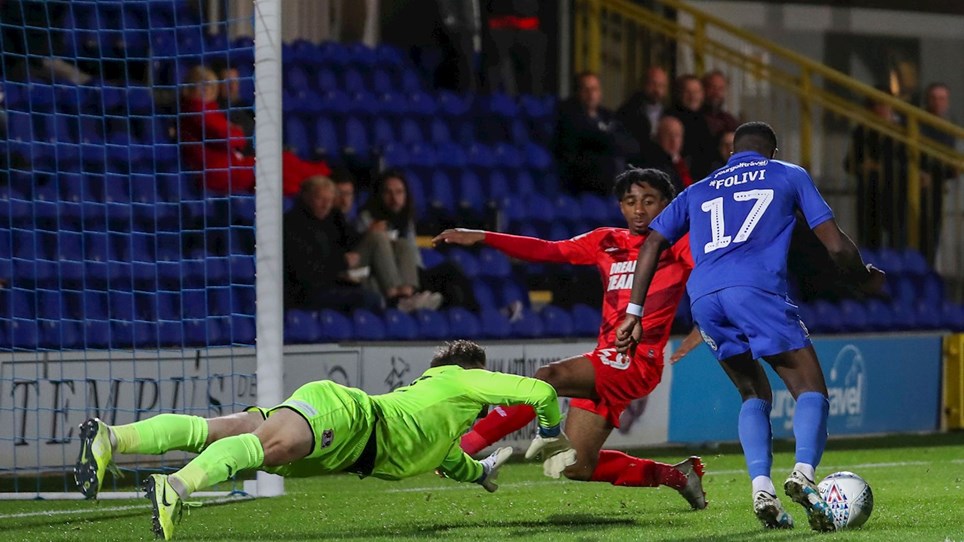 
AFC Wimbledon have an opportunity to reach the last-32 of the Leasing.com Trophy with a victory at Southend United on Wednesday 13 November (7.45 pm kick-off).