Glyn Hodges has called on his players to produce one final push and go all out for another victory tonight.

Tonight’s match is our last league fixture of the month – there’s no game at the weekend as we were scheduled to face Bury – and Wimbledon have an opportunity to go into the break by accumulating five successive wins.

“There’s no need to rest players," said Glyn. "There are no real injuries from the weekend. It’s been a quick turnaround, but we are off the back of some decent results and we are looking to get another one tonight. It normally doesn’t happen, so it’s quite nice to have a weekend off because it’s very full on usually. I’ve said to the players that there’s no need to hold anything back and we can give it our all.

“They (Burton) are a good side. They got beaten at the weekend, but it shouldn’t have been a 4-1 defeat as they caused them (Fleetwood) problems. We know that they’ve got a lot of quality players so we are under no illusions, we will have to be at our best to get anything out of it. They are well organised, they know what they are doing, and they have a lot of experience, so it’s another test for us. It’s similar to Portsmouth: every game is a test and an opportunity to win. That’s what we will be looking to do tonight.”

That last-gasp winner from Terell Thomas against Portsmouth on Saturday was a moment to treasure for everyone involved at AFC Wimbledon. Glyn had been encouraging our defenders to try something different in the pursuit of goals and it’s certainly paid off in recent weeks with Ryan Delaney having also scored at Southend in our last away game.

“We talked to them (our defenders) and changed a couple of their runs. The deliveries have been great from both sides, Max and Mitch have been putting the ball in the right areas and luckily enough we’ve got on the end of them. We’ve got two centre-halves scoring and the pressure is on for the others to chip in as well.

“It was a great atmosphere throughout the game and to score that late was great, the celebrations as well with the subs getting involved. It was great for Terell to get his first ever league goal, so there were a lot of pluses and a lot of happiness in the room afterwards.”

Take a look below at Glyn’s full interview ahead of Burton.

AFC Wimbledon's impressive run of form was ended tonight at Burton with a first-half goal from David Templeton enough to win it for the hosts.

Wimbledon improved after the break and could even have snatched a point at the end, but Burton deserved the 1-0 victory after dominating the first-half. The attacking fluency that had been so evident in recent weeks was lacking from Wimbledon and the chances were only created right at the end of this match after Burton had squandered opportunities to kill off the game.

Unsurprisingly, it was an unchanged starting line-up for Wimbledon after the stirring weekend victory against Portsmouth. Indeed, it was exactly the same squad with teenager Jack Madelin retaining his place on the bench. Wimbledon came into this match aiming to extend an impressive winning streak against a Burton side that had been on the receiving end of a 4-1 defeat at Fleetwood last time out.

The Dons started slowly at the Pirelli Stadium with Burton dominating and it needed Nathan Trott to stay alert early on. The on-loan West Ham keeper did well to hold a searching cross from Nathan Broadhead early on and that early warning was not heeded by Wimbledon, as Burton pressed forward in numbers. Trott was required again in the eighth minute when he reacted well to deny Liam Boyce. Broadhead, who was all-action in the early stages, then produced a free-kick that had Trott scrambling across to his right, but the ball flashed just wide.

Wimbledon had offered very little as an attacking force early on, but Paul Osew attempted to ignite his side with a power-packed run down the flank, but no one was able to get on the end of his cross. Almost immediately, Osew was required at the other end as he got back quickly to stop Broadhead getting a shot in. As we approached the midway point of the first-half, Wimbledon’s midfield had been unable to establish good possession with Burton keeping hold of the ball effectively. A good chance followed for David Templeton just before the half hour, but he dragged his shot wide. However, that was only a temporary reprieve for Wimbledon as the hosts made the breakthrough in the 31st minute. The Dons were caught square at the back and a simple pass through picked out Templeton, who this time made no mistake.

Going behind at least produced signs of attacking life from Wimbledon. Again, it was Osew who was the spark as he charged down the left and picked out Scott Wagstaff with his cross, but the Dons midfielder was stretching and he was only able to steer the ball over. At the other end, Wimbledon needed Trott to be alert to prevent Burton’s quick breakaway from bringing the ultimate reward, the young keeper tipping a shot from Ryan Edwards wide. The half-time whistle came with Wimbledon still 1-0 down and Glyn needed to get a reaction from his players during the interval to try and turn this around.

Though Wimbledon started the second-half with a bit more attacking intent, a quick Burton break should have doubled the advantage. Liam Boyce was picked out through the middle and he went clean through, but he fired into the side netting with the goal gaping. That was a big let-off for Wimbledon and there was still a chance to get back into this game with the hosts having failed to put this game to bed. Another chance followed for Broadhead, but he was denied by Trott.

By the hour mark, Wimbledon had still struggled to create anything of note. Mitch Pinnock showed good skill to create a shooting opportunity for himself, but he shot over the crossbar after cutting in from the right. Glyn Hodges made his first change in the 61st minute when he sent on Nesta Guinness-Walker for Paul Osew. With 20 minutes to play, there was a real let-off for Wimbledon as Burton missed a glorious chance to kill the game off. A cross from the left picked out Broadhead just six yards out, but he took his eye off it and missed an absolute sitter.

AFC Wimbledon will be aiming to extend a fine run of form on Tuesday night and there's still time to snap-up your ticket to watch The Dons in Staffordshire.

The match takes place at Burton Albion on Tuesday night (7.45 pm kick-off) and you can book tickets and travel (details of our supporters' coach are at the bottom of this page).

Advance ticket prices are as follows:

Buy now from our online ticket shop. Buy in advance until 11.00 am on Tuesday morning. You can pay on the night for this fixture, but please note that all prices increase by £2 on a match day.

Burton Albion have asked us to point out that concession ID checks take place at the turnstiles, so you must have ID if using a concession ticket. All fans under the age of 17 will need to be accompanied by an adult. For information about disabled tickets, please contact the club office on 020 8547 3528.

We will be running a coach to and from the Pirelli Stadium with pick-up points at the usual places. The coach will pick-up from opposite South Wimbledon tube station at 2.00 pm and from the Cherry Red Records Stadium at 2.30 pm. The price is £26 and you can book a place by contacting the club on 020 8547 3528. 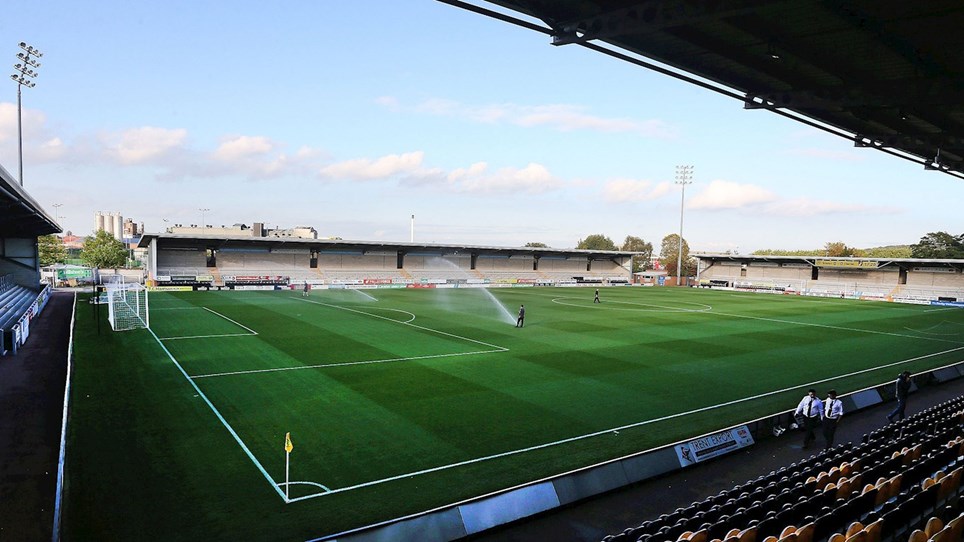 
AFC Wimbledon are at Burton Albion later this month for a midweek fixture and tickets are now available in advance.