AFC Wimbledon will on Saturday set out to ensure that Roots Hall remains a happy hunting ground and Glyn Hodges is looking forward to the challenge ahead.

Last season, The Dons went to Southend United and earned a third successive league victory – the wins all coming in the space of eight days – to reignite a push for League One survival that was achieved on the final day.

With Wimbledon having won twice already this week, making it three at Southend once again will be very much appreciated by all in blue and yellow. Glyn is expecting a tough match on Saturday against another side battling near the foot of League One, but he says that the squad will go there in a positive frame of mind.

Below are quotes from both camps, plus stats, and a look back at previous matches.

“My mind was set on what team I wanted to put out during the week. I wanted to go fairly strong, I didn’t want to rest too many. I thought it was vital that we got the job done and the lads running out 3-0 winners was more than we could have asked for. It was a positive, so we are looking forward. We’ve identified the week and every game is winnable anyway. Off the back of two wins, I’m looking forward to taking the team there and seeing what we can get.”

“We know what we’ve got to do, we’ve spoken about it. This is going to be a tough match, but also you’ve got to try and put your personality on the game. We’ve got some players who can get on the ball and play. We can’t be waiting for mistakes from the other team, we have to go and force the issue, so we will be set-up to do that.

“Every game is winnable anyway and on the back of two wins I’m looking forward to taking the team there and seeing what we can get. At Peterborough, the away fans were great and this is probably one of the local ones that they can get to a bit easier. They are great and we’ve just got to give them something to shout about. If we can put in a performance, I’m sure they will enjoy the afternoon and let’s hope we prevail.”

Take a look at Glyn’s full interview below.

"They’ve had an upturn in terms of results but it’s more about how we approach the game and go into the game. The players have trained hard and well this week, there was a game on Tuesday for some of the lads that needed the minutes so all in all it’s been a decent week.

"It’s an important game. There’s three points at stake against a club that are close to us so it’s an important fixture. The players need to show character, attitude, desire, determination, all those words need to be shown on Saturday to get any type of result. We need to make sure we come to the game focussed and ready to go.”

The Dons will have Marcus Forss available for this fixture after the young striker decided to favour club duty, rather than go away and play for Finland Under-21s. Luke O’Neill (calf), Adam Roscrow (thigh), and Rod McDonald (knee) are all ruled out.

The Dons won both matches versus Southend United last season. The first of those was achieved thanks to a winner from Mitch Pinnock with Simon Bassey as the club’s Interim Manager. More recently, Joe Pigott scored the only goal at Roots Hall, an opportunistic strike after a defensive lapse, and that was a vital win in the battle to stay up. It was a fourth victory for AFC Wimbledon at Roots Hall since the club was reformed. Take a look at the highlights from that game below.

Wimbledon supporters can pay on the day (cash only) at the ticket office at Roots Hall. See our previous article for ticket prices.

If you’re not attending the game, you can stay in touch with it by tuning into our iFollow service with Mikey T and Rob Cornell commentating on the match for WDON.

Marcus Forss cracked home a stunning hat-trick to help AFC Wimbledon to a first away victory of the season.

The on-loan Brentford forward struck a superb treble in a 4-1 win at Southend, Ryan Delaney netting the other goal. The result lifted Wimbledon out of the relegation zone and our supporters sung their hearts out to salute a fifth victory at Southend since we returned to the league. A total of 666 travelling Dons made the trip and it was a proud day to be a Wimbledon supporter. Forss was simply unstoppable, his decision to stay with us rather than go away on international duty with Finland Under-21s certainly vindicated.

Glyn Hodges made just one change from the side that started our last league match versus Rochdale. Ryan Delaney, who was ineligible for that game against his parent club, returned to the starting line-up with Will Nightingale ruled out due to injury. The Dons came into this match seeking a third successive win after victories against Rochdale and Leyton Orient.

Wimbledon started this match full of confidence and it didn’t take long to make the breakthrough, thanks to another clinical strike from Marcus Forss. The 20-year-old forward, who decided to stay here rather than go away on international duty for Finland Under-21s, pounced after a good pass from the right by Scott Wagstaff and his shot just had enough on it to beat Southend keeper Mark Oxley. Joe Pigott had already had a shot deflected just wide before that and the same player had a chance to make it 2-0, but his header was straight into the arms of Oxley.

Following such a great start by Wimbledon, it was no surprise when the advantage was doubled in the 11th minute. Max Sanders found space in the box and had his shot blocked, before Terell Thomas was denied by the keeper, but there was no stopping Forss with the follow-up as he cracked home emphatically. At this stage, Wimbledon were cruising with Sanders and Anthony Wordsworth getting on the ball in midfield and Wagstaff finding plenty of space on the right-hand side. However, the game was turned on its head within two minutes as Southend halved the deficit. A simple move down the Southend left caught out Wimbledon and a cross from Nahtan Ralph was headed home by Tim Dieng.

Southend wasted no time pressing for the equaliser after getting a goal back, but Wimbledon still looked dangerous on the attack. A fine Dons move ended with Wagstaff picking out Mitch Pinnock with a lovely cross, but his volley was comfortably over the crossbar. It was during the spell around the half hour mark that Wimbledon had to hold firm and ride out the Southend pressure. Stephen Cox headed wide of the target, before Stephen McLaughlin tried his luck with a shot that Nathan Trott tipped wide of his near post. The hosts put crosses into the box that pinged around the box, but Wimbledon’s defence stayed resilient to prevent any clear-cut chances.

Though Southend had come into it in the first-half, it was a deserved lead for Wimbledon and this was a great chance now to earn a first away win of the season. That welcome scenario moved a step closer when the referee awarded Wimbledon a penalty in the 52nd minute. Pinnock swung in a corner that resulted in Ryan Delaney being fouled in the box and that offered Forss a chance to bag his hat-trick. What followed was a simply stunning spot-kick as he cracked the ball into the top corner, leaving Oxley with absolutely no chance.

This time after Wimbledon earned a two-goal lead, there was little response from the hosts, who looked ready to accept their fate. For long spells of the second-half, you could only hear the travelling Dons singing their full repertoire of songs with ‘Show me the way to Plough Lane’ given a vociferous rendition or two. Our supporters behind the goal had further cause for celebration when a fourth goal arrived in style in the 72nd minute. Ryan Delaney soared high to power home a superb header after getting on the end of a corner and that effectively sealed victory for Wimbledon. Forss was brought off to a standing ovation from our supporters when he was replaced by Kwesi Appiah in the 78th minute – and deservedly so after his stunning hat-trick. It all added up to another memorable away day for Wimbledon at Southend and it rounded off a superb week for The Dons.

AFC Wimbledon's last visit to Southend United brings back happy memories of an important Dons victory - and your support at Roots Hall can once again help the team to a vital win.

Tickets have sold well in advance for this match, but you can pay on the day (cash only from the ticket office at Roots Hall).

Wimbledon last season earned an important victory at Southend on the way to League One survival and the picture above shows our supporters celebrating at Roots Hall.

Glyn Hodges yesterday praised your great away support at our last away game at Peterborough and more of the same will be greatly appreciated tomorrow.

Ticket prices (in advance) are as follows:

You can buy in advance until 3.00 pm today Friday. Buy from our online ticket shop. 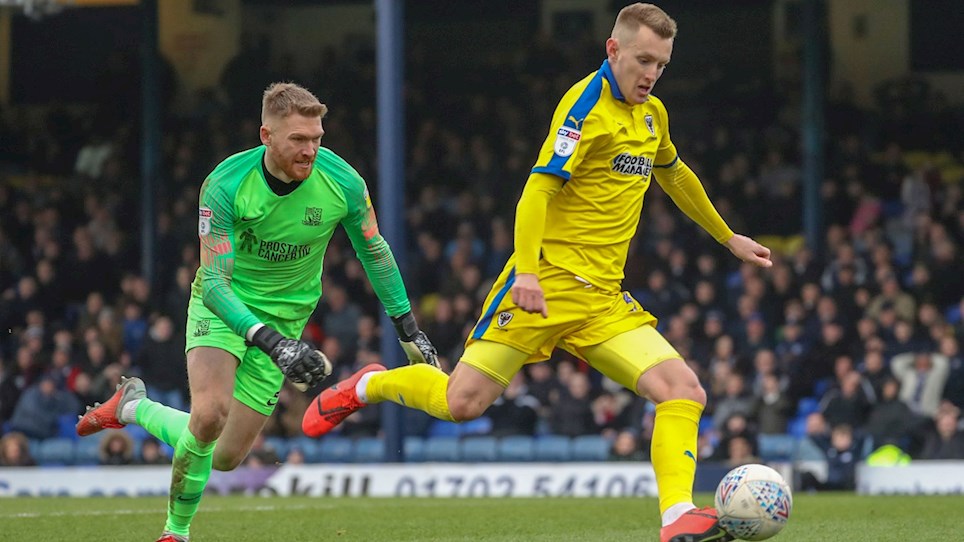 Tickets on sale for Southend away match


AFC Wimbledon make the trip to Southend United on Saturday 12 October (3.00 pm kick-off) and tickets are now on sale for this match.