AFC Wimbledon produced a much-improved second-half at Peterborough today, but it was just not enough to earn a point.

At 2-0 down at the break, it seemed a foregone conclusion, but goals from substitutes Mitch Pinnock and Anthony Wordsworth threatened to earn a share of the spoils, Peterborough just edging it 3-2 in the end. Despite the defeat, the second-half offered hope for Wimbledon. Plenty of good football was on display after the break and a repitition of that in the coming weeks will certainly be most welcome.

In his first game in charge of first-team matters, Glyn Hodges made four changes to his starting line-up. With Marcus Forss suspended and Michael Folivi injured, Joe Pigott and Kwesi Appiah were both handed recalls up front. Max Sanders came in for his first Wimbledon start in place of Anthony Hartigan with Paul Osew preferred at left-back to Nesta Guinness-Walker, who was on the bench. Sanders and Osew were making their first starts in league football and the youngsters both made positive impacts.

Wimbledon started well and Scott Wagstaff was just unable to get on the end of a cross into the box, before Luke O’Neill curled a free-kick wide. The Dons certainly enjoyed a decent share of possession early on, but it was Peterborough that had more cutting edge. Mo Eisa found space inside Wimbledon’s box after a good home move, but his shot from an acute angle was tipped wide by Nathan Trott. With the hosts starting to turn the screw a little, Osew’s pace down the left provided a useful outlet and he found space around the back, but his cross into the box failed to find Wagstaff or Appiah in the middle.

The Dons had restricted Peterborough to very little in the first 25 minutes, but the hosts were celebrating the opening goal in the 29th minute. A defensive lapse from O’Neill provided Marcus Maddison with space and he needed no second invitation to try his luck. What followed was a superb demonstration of finishing as he struck a rising 25-yard effort that arrowed into the roof of the net, leaving Trott with no chance. Peterborough wasted no time in pressing home the advantage. Ivan Toney struck a fine free-kick that Trott was forced to tip over, before Maddison also struck a shot from a similar situation that was well saved.

There was no reprieve though for Wimbledon in the 41st minute as Peterborough doubled the advantage. Mo Eisa showed a fine turn of foot to earn the chance, but the ease with which he darted between two challenges was not good enough from a Wimbledon perspective. The 2-0 half-time score-line was going to be difficult for Wimbledon to come back from now, especially with Peterborough having recently brushed Rochdale aside 6-0.

Glyn Hodges made two bold half-time changes with Mitch Pinnock and Anthony Wordsworth on as substitutes in place of Terell Thomas and Callum Reilly. The Dons were thrown a lifeline in the 52nd minute when Pinnock halved the deficit, thanks to a helping hand from the Peterborough keeper. Pinnock’s shot was well struck, but it was straight at Christy Pym, who let the ball squirm under his body and into the net for a Wimbledon goal. All of a sudden, it was a different match now. With Wordsworth getting on the ball in midfield and making a positive impact, Wimbledon started to come into it. Max Sanders, making his full debut, linked up well with his more experienced team-mate in the centre of the park and it was an encouraging display from the on-loan Brighton youngster. Just after the hour, it appeared that the equaliser had arrived when Wagstaff’s cross picked out Pigott in the box and he headed home emphatically, but the flag was up for offside.

During Wimbledon’s good spell, the danger increased of Peterborough exploiting gaps at the back. Toney shot just wide after Maddison had used his pace to good effect. However, a third goal did come in the 66th minute for Peterborough. A quick break ended with the hosts having men over in attack and Eisa finished clinically. The Dons were fortunate that Maddison was not so clinical shortly afterwards when he shot straight into the arms of Trott after more good play from Eisa had set-up the chance.

Wimbledon had certainly shown plenty of spirit and fight in the second-half, demonstrating much more confidence on the ball, and a goal back was certainly much deserved. What a goal it was too when it arrived in the 78th minute as Wordsworth picked his spot with a lovely strike from 20 yards into the bottom corner after receiving a pass from Osew. It was game back on now, as Wimbledon pressed forward for an equaliser. The hosts responded by rattling the crossbar through Toney, but Wimbledon piled forward in search of an equaliser. It so nearly came when O’Neill crossed to find Pigott, but his header was just wide of the far post. Despite piling forward in search of an equaliser as anxiety grew amongst the home support, Peterborough held on for the victory.

AFC Wimbledon are back on the road again with a match at Peterborough on Saturday and our supporters can pay on the day to cheer on The Dons.

It's not an all-ticket game, but you can buy in advance until 3.00 pm today (Friday) at a slightly cheaper price. Buy in advance from our online ticket shop. Pick-up your ticket on the day from the ticket collection office opposite to the main ticket office at Peterborough.

Dons fans will be accommodated in the seated, covered, North Stand, accessed via turnstiles 2–6.

Please note that all prices rise by £2 on the day of the game, other than that for Under-18s, which rise by just £1. On the match day, all concessions must produce proof of age, or entry may be refused.

Prices in advance are as follows:

Eight wheelchair spaces are available for away fans, together with a carer seat. Contact the club on 020 8547 3528 for more information. Ambulant and wheelchair disabled fans pay the age-related price, with carers admitted free of charge. There is no restriction on where ambulant disabled fans may sit, but B Block Lower is recommended. Headsets for match commentary are available for visually impaired fans at the main reception area.

The supporters’ coach will leave from opposite South Wimbledon tube station at 10.00 am and from the Cherry Red Records Stadium at 10.30 am. The price is £20, and places on the coach can be reserved by contacting the club office on 020 8547 3528. 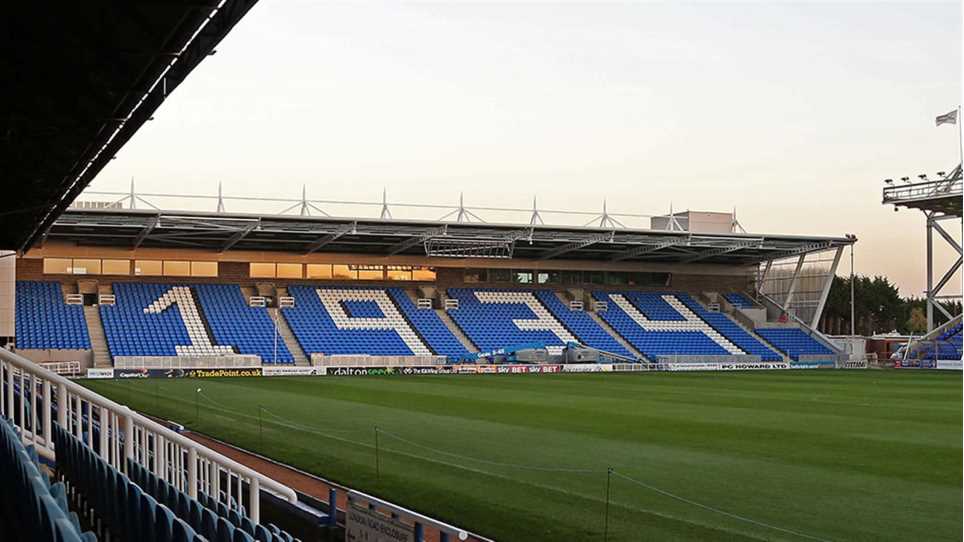 
AFC Wimbledon's final match this month is at Peterborough United and tickets can now be purchased online.