Midfielder Luke McCormick will miss Saturday’s League One trip to Cheltenham Town having injured his ankle in training on Thursday.

“Luke blocked a cross in training yesterday and turned his ankle,” said Head Coach Mark Robinson. “We just can’t seem to grab a break with injuries at the moment.

“Luke was due to get a scan this afternoon to see how bad it is. He seemed a lot more positive this morning than he did yesterday, but obviously with the disappointment of getting injured that can make the pain feel even worse. I had a chat with him this morning and he’s still in discomfort, but it’s not as bad as it was yesterday. We’ll see what the scan reveals, but hopefully it’s not too long term.”

There Is better news concerning striker Sam Cosgrove (back) who will be with the squad for the visit to Gloucestershire.

“Sam trained yesterday, which was good,” said Robbo. “We wanted to see how he was. He trained today, so he’s fully in contention. Egli Kaja is well on his way back now and training and the same with Henry Lawrence, who has had a really good week. Having lost Cheye Alexander for the season, Henry is now back in with us and doing well.

“It won’t affect tomorrow’s game, but we’ve had Terry Ablade (Finland), Tomas (Lithuania) as well as Dan Csoka (Hungary) all called-up at under-21 level.”

The two sides have met twice already this season at the Cherry Red Records Stadium and both games have produced plenty of goals. We beat Cheltenham 4-3 to knock them out of the FA Cup in December and it finished 2-2 at the start of February in the league.

“They recruited well in January,” said Robbo. “They’ve recruited well up top, with Alfie May scoring for them. We know quite a bit about Cheltenham, and I was pleased with our performances against them. In the cup, we played really well, but then let them back into the game. In the league, I thought we were dominant.

“We know the areas we need to improve on to bring about the wins. That’s what we’ve been working on all week and despite the disappointment of losing Macca, the lads are in great spirits, and we need to put it right on Saturday.”

You can see the full preview with Head Coach Mark Robinson below, via the video link to our official YouTube channel.

AFC Wimbledon were made to pay for not taking advantage of being on top for the vast majority of the game at Cheltenham Town today.

The hosts clinically turned the match on its head to win 3-1 after we had threatened to get back to winning ways.

It was all going according to plan for Wimbledon after Jack Rudoni had put us ahead in the first-half, but the Robins fought back with two goals in the space of three second-half minutes to turn the game on its head.

All the hard work that had been put in on the training pitch in the build up to this game, all the determination and grit that was shown in the first 60 minutes had gone out of the window in the space of just a few moments. In the end, it proved to be a setback that we just couldn’t recover from.

Alfie May went on to add a third in stoppage time to further deepen the blow for our side, leaving Mark Robinson and his staff with plenty to mull over as our winless run continues.

With other results seeing us fall into the relegation zone, there is certainly an ever-increasing sense of urgency to get vital points on the board as we approach the business end of the campaign.

Robbo rang the changes for this game with Henry Lawrence, Sam Cosgrove, Anthony Hartigan and Nesta Guinness-Walker coming in for Cheye Alexander, Zach Robinson, Luke McCormick and Lee Brown. Our latest signing Derick Osei Yaw took his place on the bench as he aimed to make an instant impact after his arrival on Friday.

Stunning weather greeted the travelling Wimbledon hordes as they packed out the away end at the Jonny-Rocks Stadium – the familiar chant of ‘I’m Womble Till I Die’ echoing around the traditional ground.

Cheltenham presented a stern test for the Dons as they had in previous encounters this season, nevertheless it didn’t take our young side long to carve them open. A lovely, chipped ball over the top sent Ayoub Assal clean through on goal with just the keeper to beat, but his effort was somewhat scuffed and ended up going harmlessly wide.

Alas, Wimbledon wouldn’t have to wait too much longer to break the deadlock and they did it with a goal that the Crazy Gang would’ve been proud of. A long pass downfield was misjudged by the Robins’ backline, allowing Rudoni to steal in and slide the ball under the onrushing Owen Evans. It was the least the Dons deserved after a promising opening half an hour.

Despite taking the lead, Wimbledon still had to remain resolute to see out the half in front with Cheltenham offering plenty of threat when they were allowed room to play.

The 648 in attendance from SW19 certainly had lot to shout about heading into the second half and they kept the atmosphere going in support of Robbo's boys. It was more of a workmanlike performance from our side in the second period, largely typified by the sight of Ben Heneghan sporting a yellow headband after taking a whack for carrying out his defensive duties.

Further up field the forwards and midfielders worked in unison to continually force Cheltenham back into their own half, pressing high and hard at every opportunity. However, we were made to pay for one lapse of concentration as Callum Wright swept home from close range after the initial Cheltenham shot had been deflected into his path.

It was a goal that clearly rocked the Dons and before you knew it the hosts had taken the lead as substitute George Lloyd met Matty Blair’s cross as things went from bad to worse. Robbo acted quickly after seeing his side fall behind with Osei Yaw and Paul Kalambayi being introduced, but those changes did little to change the course of the game as Cheltenham clinched victory in stoppage time through May’s breakaway goal.

AFC Wimbledon next month visit Cheltenham Town for the first time since 2014 and tickets are now available to buy for this match.

Robbo’s boys are at the Jonny-Rocks Stadium on Saturday 19 March (3.00 pm kick-off). Our supporters will be located in the Hazelwoods Stand at the Whaddon Road end of the stadium (behind the goal) with the following ticket prices:

Ambulant disabled tickets will be priced at the standard rate for their respective age groups with one complimentary carer if required. For information, contact our ticket office on 020 3988 7863 or e-mail tickets@afcwimbledon.ltd.uk .

To get your ticket, visit our online shop.

We will be running a supporters’ coach to this game and we will update you with details in due course.

Wimbledon’s last visit to Cheltenham ended in a 1-1 draw with Adam Barrett scoring our equaliser.

Click on the link below to watch the highlights from that match. 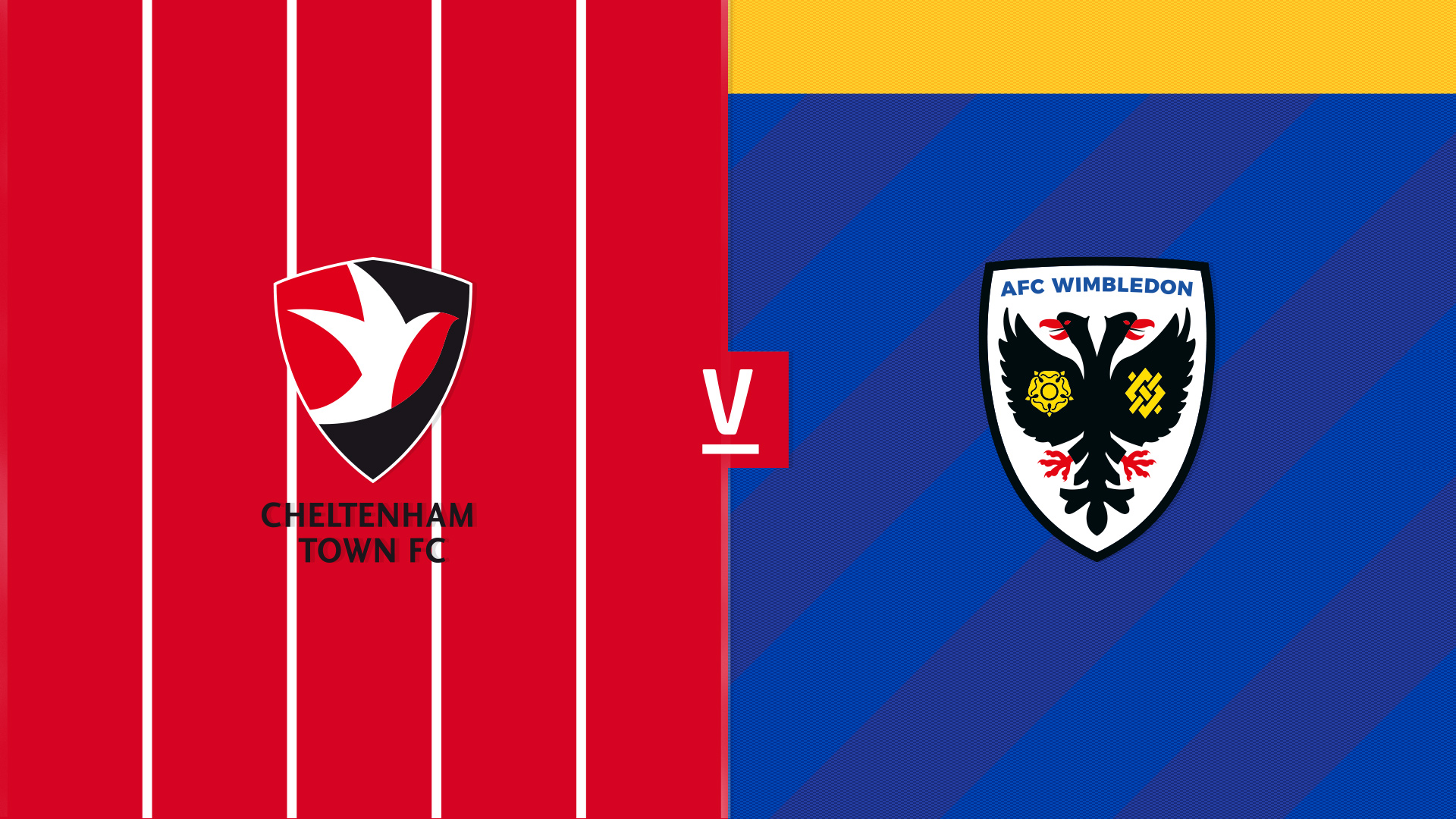 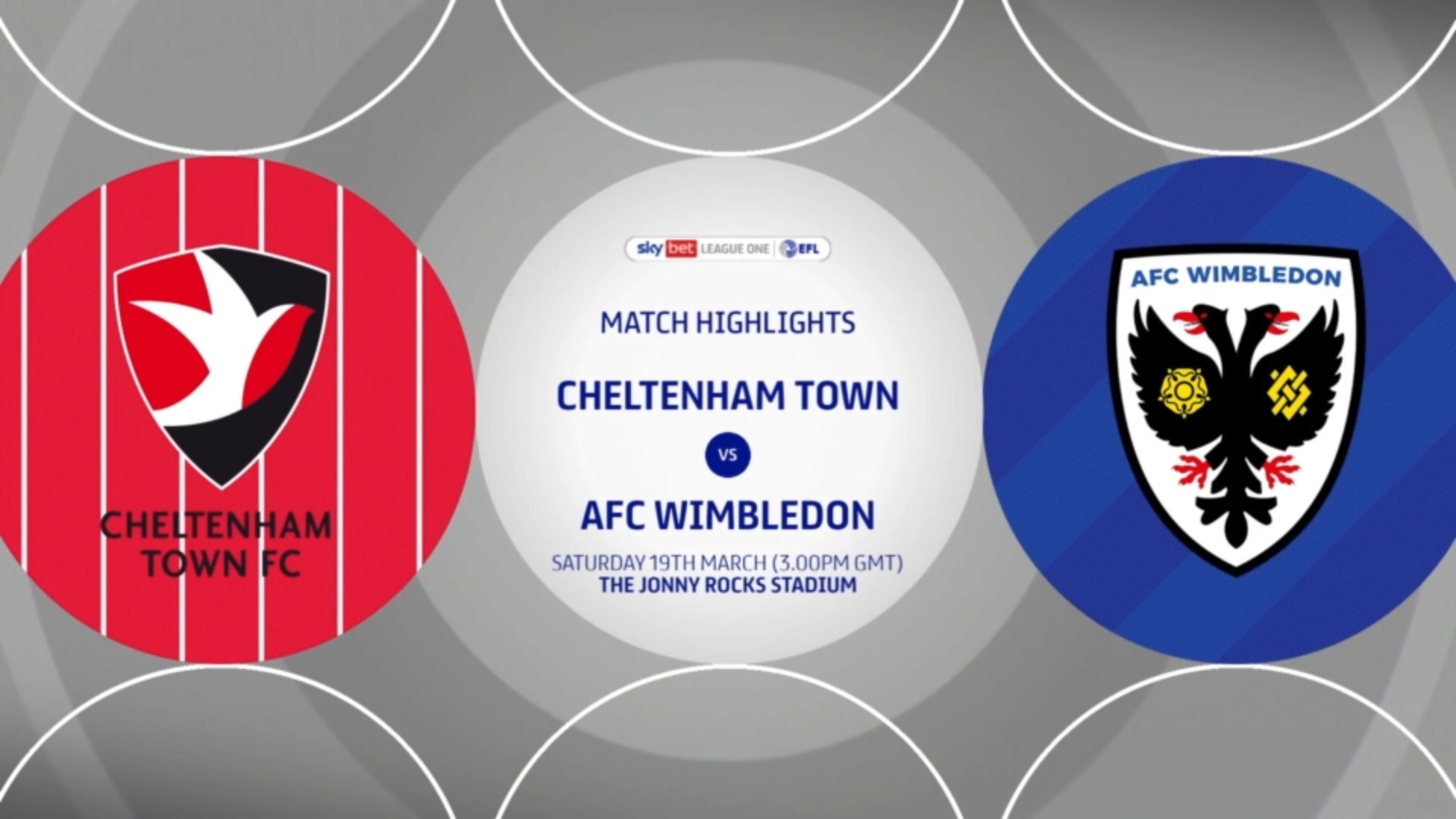 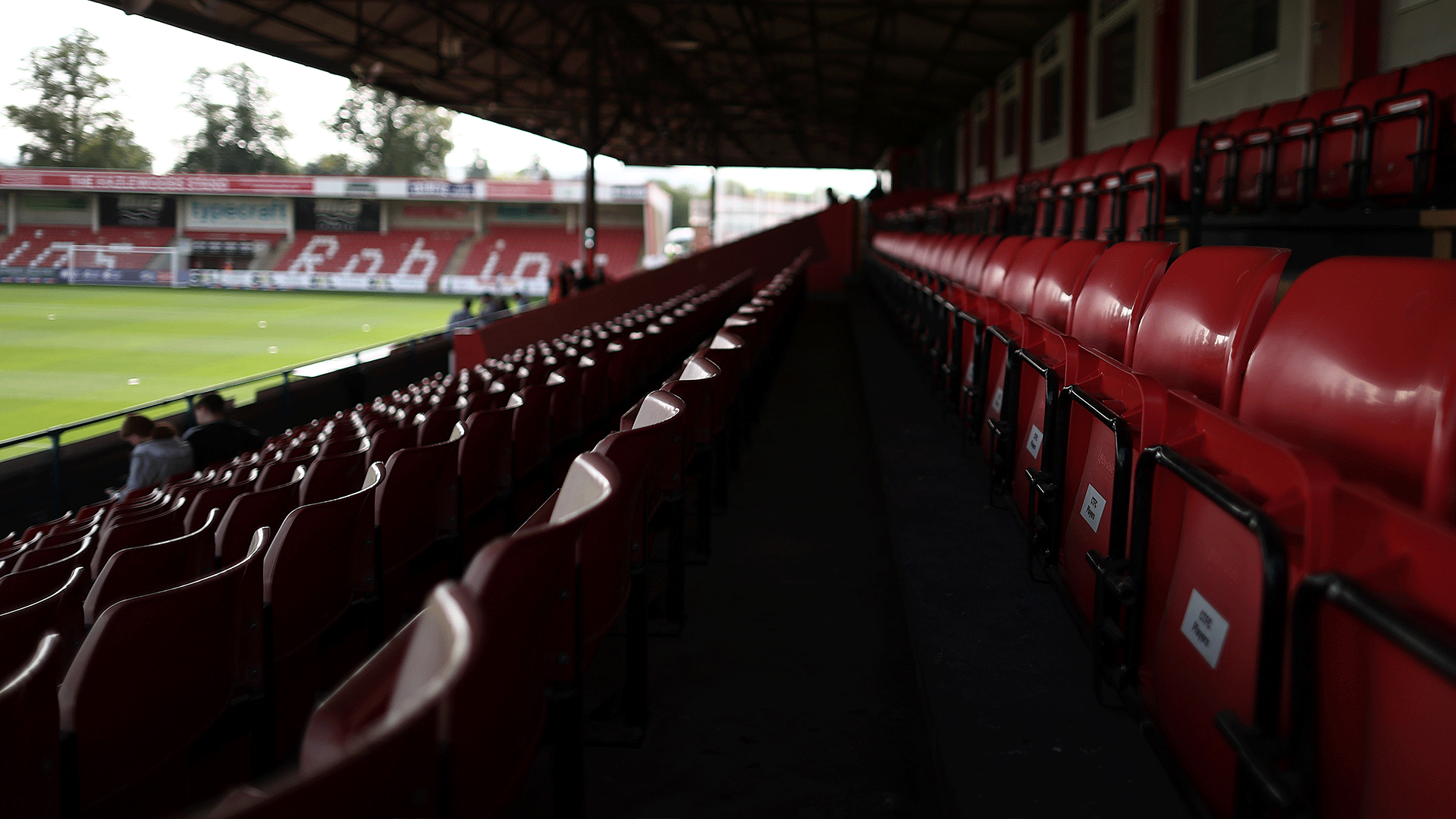