The Dons were sent spinning to an undeserved defeat today with an encouraging away performance earning no reward.

After taking a first-half lead through an Ollie Palmer penalty, the Dons threatened to pull off an impressive away win, creating a host of chances on the day, but Portsmouth snatched it with a 90th minute winner. The 2-1 defeat was harsh on Wimbledon after contributing so much to this game - and the 910 travelling Dons supporters showed their appreciation at the end by applauding Robbo and the boys. Though defeat was a bitter pill to swallow, this was a much-improved display from the Dons and it augurs well for the rest of the season.

Mark Robinson decided to pitch Paul Osew straight back into action to fill the vacant right-back spot. The 20-year-old left-back made the switch to the other flank due to the injury suffered by Cheye Alexander and Henry Lawrence having been ruled out due to illness. First year professional Luke Jenkins travelled for the first time with the squad and he was joined on the bench by fit-again George Marsh, who had recovered from a broken bone in his foot. This was actually Wimbledon’s first league match of the month due to the international break and with previous games in the FA Cup and the Papa John’s Trophy during November.

Taking on an in-form Portsmouth side on their own patch was never going to be an easy task and the home faithful started to raise the decibel levels after watching their team threaten in just the third minute. A quick break led by Michael Jacobs ended with the Portsmouth midfielder sending over a cross that appeared certain to end with a goal as it found George Hirst in space inside the area. However, Osew had other ideas and he showed real pace and awareness to track back and get in a vital touch for a corner.

Wimbledon showed attacking threat for the first time when Luke McCormick found space on the left to send over a cross that picked out Ollie Palmer, but his well struck shot was unfortunately straight at Pompey keeper Gavin Bazunu. During an all-action opening spell that ebbed and flowed, the home side came so close to breaking the deadlock in the 10th minute. Marcus Harness produced a delightful flick to set-up a great chance for Jacobs, who was clean through, but Nik Tzanev was quick of his line to make a fine save.

The early interventions by Osew and Tzanev became even more important when Wimbledon made the breakthrough in the 24th minute. Nesta Guinness-Walker produced a marauding run into the box and the referee pointed to the spot after he went down under a challenge. The home faithful were outraged, but there appeared to be contact and Palmer kept his cool to slot home confidently. Rejuvenated by the early goal, particularly after a testing time recently, the Dons swarmed forward and a second goal almost followed when Jack Rudoni’s close-range effort clipped the top of the crossbar. At this stage the Dons were dominant with Anthony Hartigan and Alex Woodyard seeing plenty of the ball in midfield. Luke McCormick was also finding plenty of space to link the midfield and attack effectively.

As we approached half-time Pompey started to find their stride again and Tzanev was required to make a vital save again when he got down low to deny Harness. However, the Dons had a golden chance to strike a killer second goal just before half-time. McCormick won the ball high up by pressing effectively and that set-up an opportunity for Rudoni, but his well struck shot was too close to Bazuna.

The half-time whistle shrilled with the Dons 1-0 up and it had been a fine away display so far with Robbo's boys growing in confidence as the first-half progressed. The second-half started with Wimbledon on the front foot and Osew showed his attacking threat for the first time when he beat his marker to get in a cross that was met by McCormick, but his shot was blocked and appeals for a penalty fell on deaf ears.

As Portsmouth attempted to get back into this game Ben Heneghan and Dan Csoka were required to stay solid at the heart of defence. Captain Woodyard also showed his commitment to the cause by dashing back to get in a vital challenge that stopped a threatening Pompey attack. However, the hosts did equalise just after the hour when Jacobs found space in behind on the Wimbledon right and he struck a shot that beat Tzanev at his near post.

The Dons showed plenty of spirit though to stop Portsmouth from exerting sustained pressure, digging in at a time when the crowd were really getting behind their team. And the lead was almost restored for Wimbledon in the 73rd minute when Rudoni found space just inside the area, but his shot flashed just wide of the target. With 15 minutes left Robbo made a double change with George Marsh and Aaron Pressley introduced for Luke McCormick and Ollie Palmer.

There was no sign of Wimbledon merely settling for a point as we entered the latter stages and Osew tried his luck with a 30-yard drive that brought a decent save out of Bazuna. Osew was also denied by the keeper from close-range, and it appeared for all the world that the Dons had earned a creditable point. However, Harness had other ideas as he ensured all three points for the hosts, striking a shot that left Tzanev with no chance after the Dons had allowed him to shoot.

We’d like to inform fans that any Portsmouth away tickets purchased after 11am this morning will not be posted but will be available for collection from Fratton Park on Saturday. 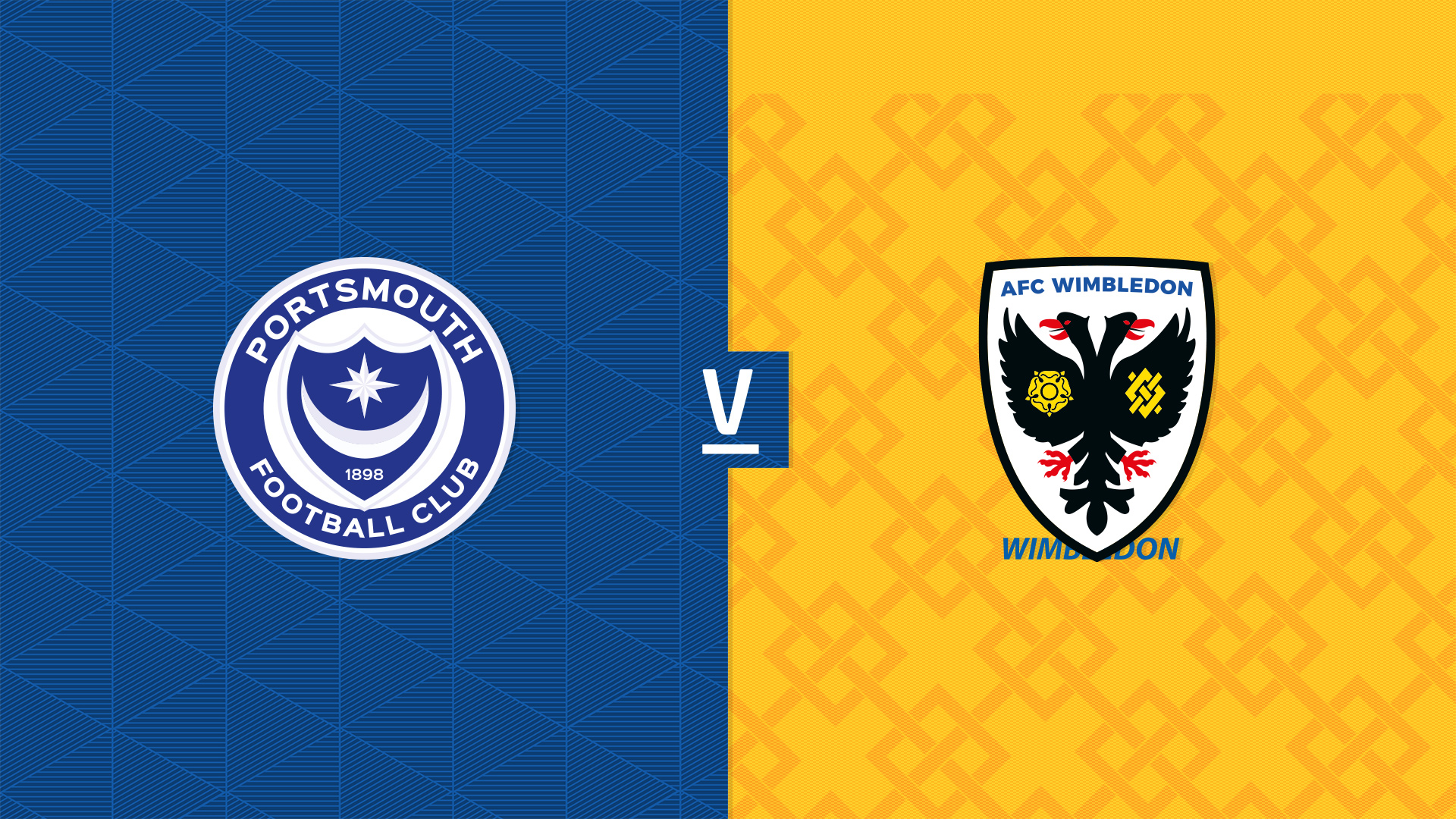 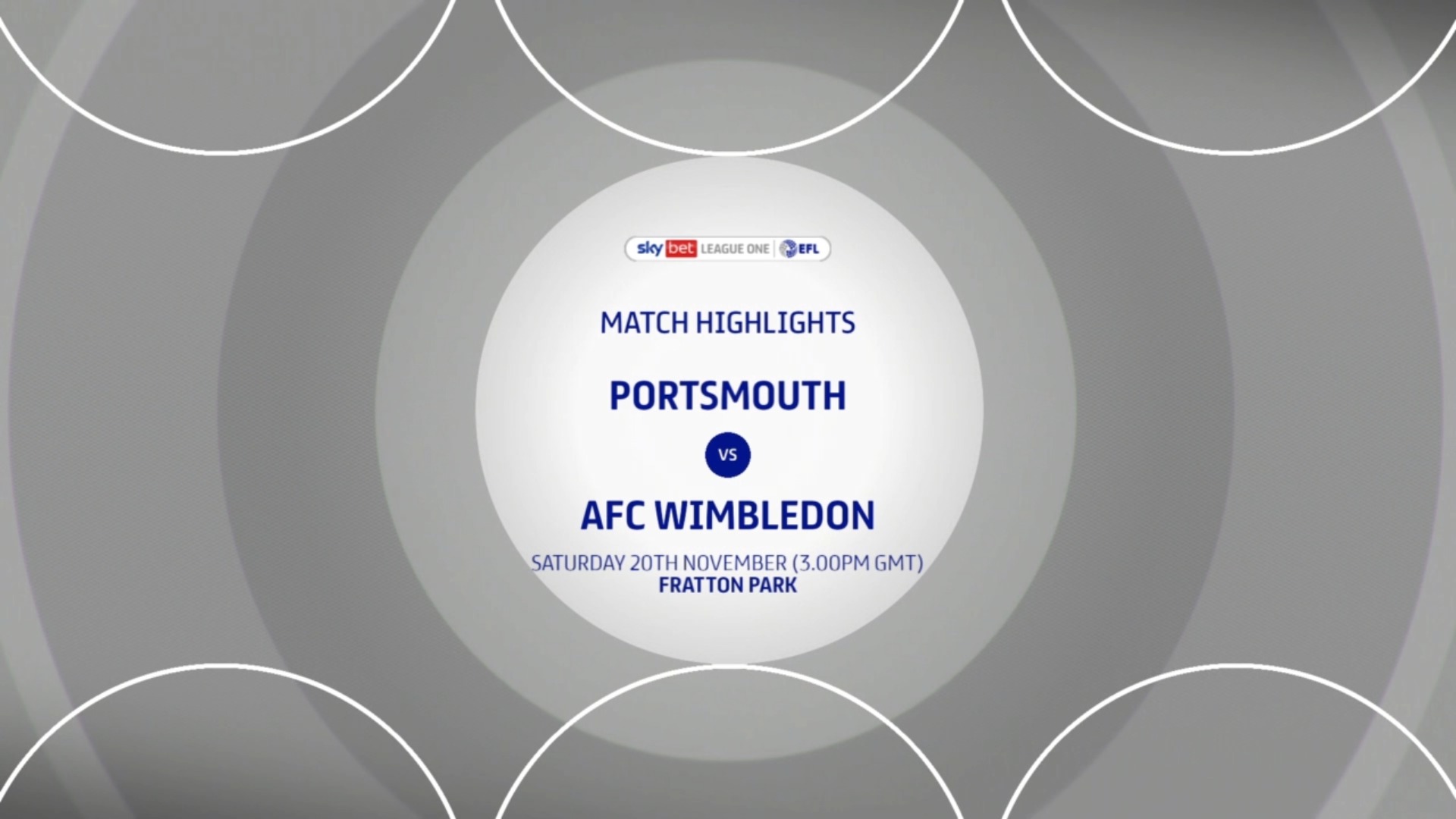