A slack start to the second-half again cost Wimbledon at Cambridge United today.

The 1-0 win for the hosts was achieved thanks to a goal by Jensen Weir less than two minutes after the restart, and there was no way back for a Dons side cheered on by 922 travelling supporters.

They almost had a goal to celebrate near the end when superb play by substitute Nesta Guinness-Walker fashioned a good chance for Jack Rudoni, but he headed straight at Cambridge keeper Tomas Holy. The Dons certainly improved as the second-half progressed, threatening to salvage a point, but it was that slow start after the break that proved decisive. Weir's looping header that won it acted as a springboard for Cambridge's best spell of the match. Though Wimbledon survived it to stay in the game, that cutting edge in attack was lacking.

Mark Robinson made two changes to his starting line-up from the side beaten at home to Wigan last Saturday. Henry Lawrence earned a recall in place of Nesta Guinness-Walker and Dan Csoka filled the gap at centre-back left by Paul Kalambayi’s injury. Our last visit here was back on New Year’s Day 2016 when the Dons stormed to a 4-1 victory during a season that ended with promotion glory at Wembley. Under the astute management of Mark Bonner, who Robbo knows well from the days of Wimbledon versus Cambridge Under-18 matches, the Us were promoted from League 2 last season.

In a first half an hour of little goalmouth action, Anthony Hartigan was perhaps our best performer as he established good possession in the centre of the park, spreading the ball around well when the opportunities arose. The 20-year-old midfielder has shown impressive technique from set-piece situations this season

With seven minutes until half-time, Dan Csoka’s intervention was required when he put his body on the line to make an important block that stopped Jensen Weir’s goal-bound shot from causing Nik Tzanev any problems. Cambridge attacker Shilow Tracey had started the game well with his pace and movement, but the Dons gradually cut out his threat. Ben Heneghan, who had been one of our most consistent performers this season, showed his defensive qualities once again when he reacted well to deal with Jensen Weir’s cross.

As we approached half-time, Robbo’s boys fashioned their best chance yet when Cheye Alexander delivered a lovely cross from the left that picked out Jack Rudoni, who met it with a powerful header, but Holy made an impressive full stretch save. The Dons were unable to build on that strong end to the first-half at the start of the second period and Cambridge opened the scoring inside two minutes of the restart. A cross was only half cleared and a header by Jensen Weir looped over Nik Tzanev and in for the opener.

As we approached the hour mark the Dons had to dig deep to stay in this match. Having watched their side take the lead, the home faithful started to raise the decibel levels and for the first time on the day Wimbledon were put under sustained pressure. Nik Tzanev did very well to palm away an angled shot by Tracey, before Heneghan did even better to get back and clear a shot by Weir off the line. The hosts were also peppering the area with long throws at every opportunity, and the Dons had to stay resilient to defy them. After watching his side lose their way, Robbo responded with two changes in the 65th minute. Ollie Palmer was introduced for his first taste of league match action in over five weeks with Aaron Pressley making way and Nesta Guinness-Walker replaced Henry Lawrence.

Palmer was straight into the thick of the action, the towering striker looking lean and raring to go in his comeback appearance. His appearance certainly gave Cambridge something different to think about, and a good chance followed when Alex Woodyard delivered a cross to the far post that Csoka met with a header that clipped the outside of a post. Palmer then almost broke through on goal, but he was just stopped in his tracks and the referee was unimpressed by the appeals for a penalty.

As we entered the last 10 minutes Wimbledon continued to press forward and Hartigan had a shot well saved by Holy. Wimbledon had a great chance to restore parity with five minutes left when Guinness-Walker powered down the left, before sending over a cross that picked out Rudoni, but he headed straight at the keeper from close range. That was it as far as clear-cut chances, as too often the Dons resorted to long balls into the box to find an equaliser, playing into the home side's hands. Next up for the Dons is a match away from league action - the Emirates FA Cup tie versus Guiseley AFC - and Robbo has a full week to ensure the players are at their maximum heading into an important home game.

Tickets are on sale for our next away game against Cambridge United on Saturday 30th October.

Tickets for this game can be bought online or from the Club Shop (Monday to Friday 10am - 5pm).

If you have any ticketing issues please email the Ticket Office: tickets@afcwimbledon.ltd.uk or give us a call on 020 3988 7863.

* Juniors must be accompanied and seated with someone who is 16 or above.

All ticket prices will increase by £2 on the day of the game.

Due to short turn around, we are unable to offer a postal service for this game. 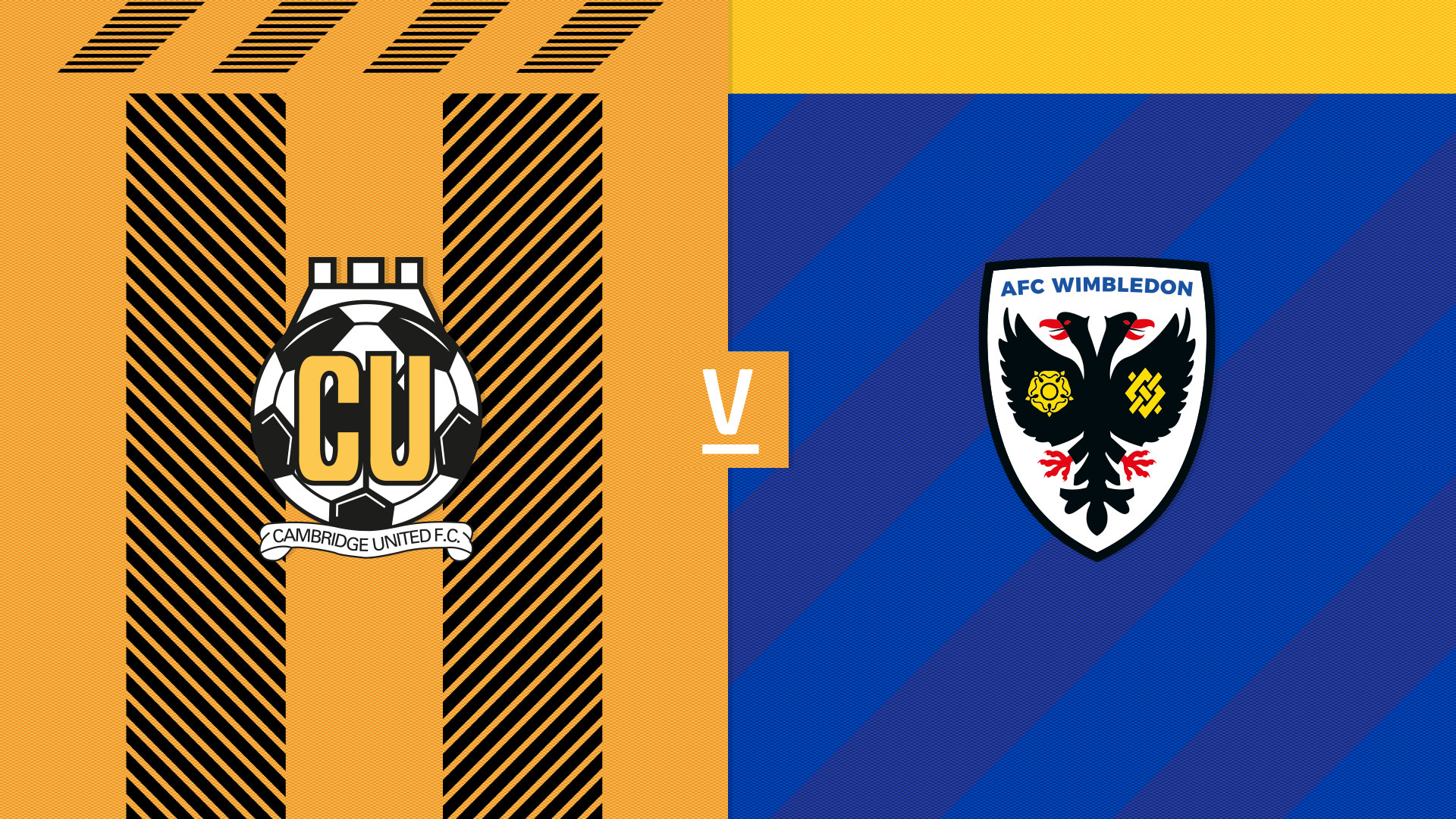 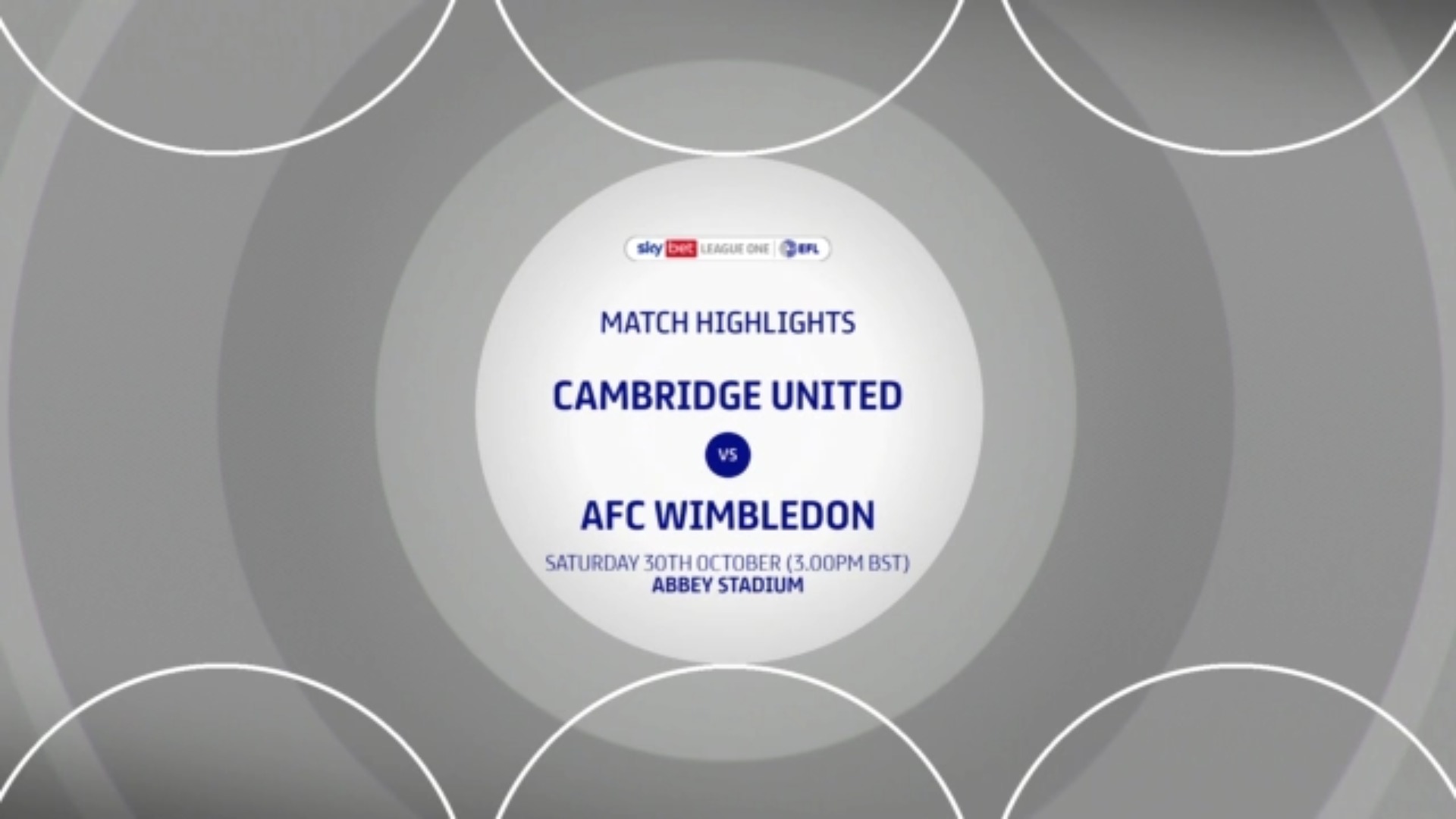 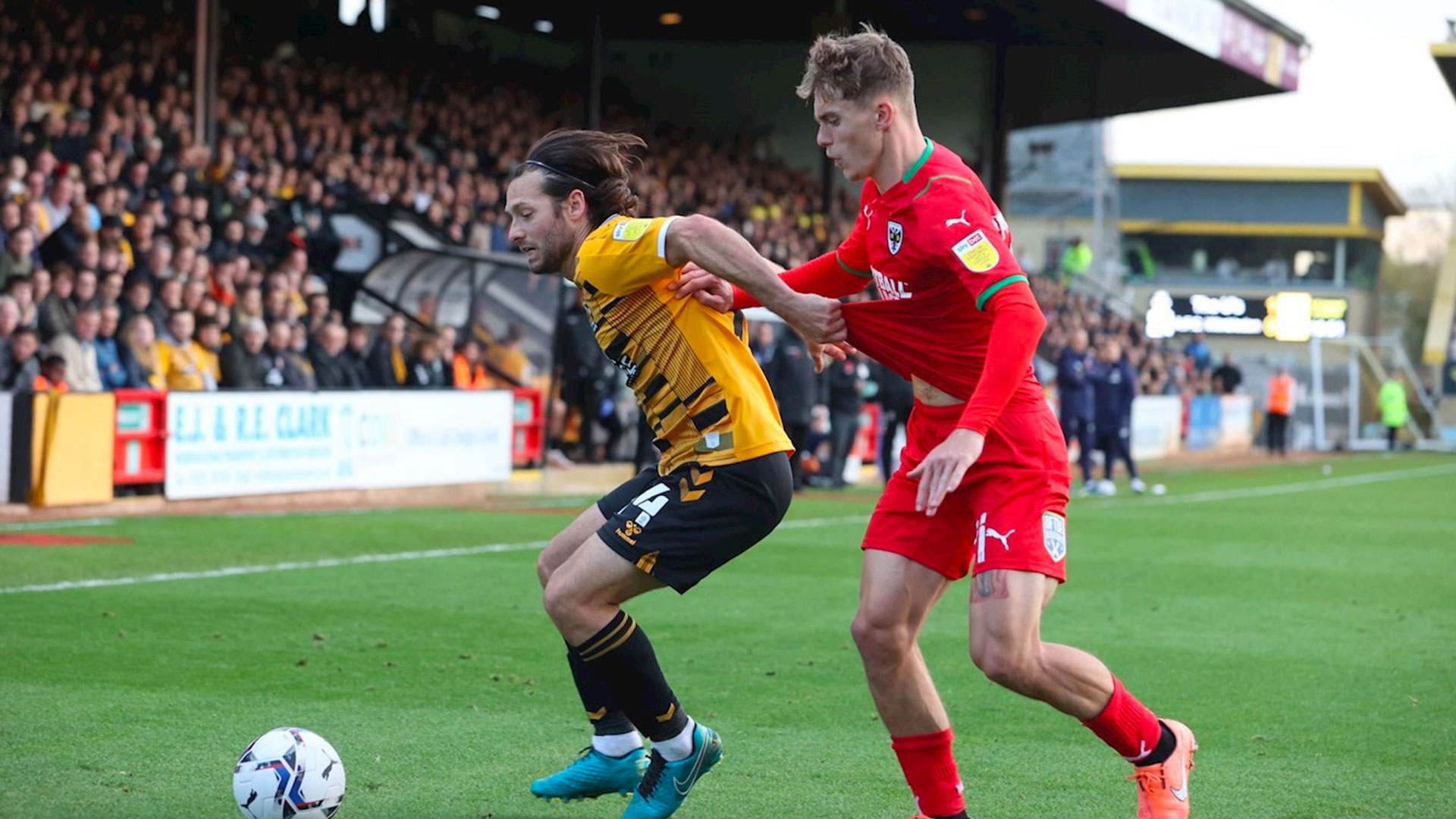