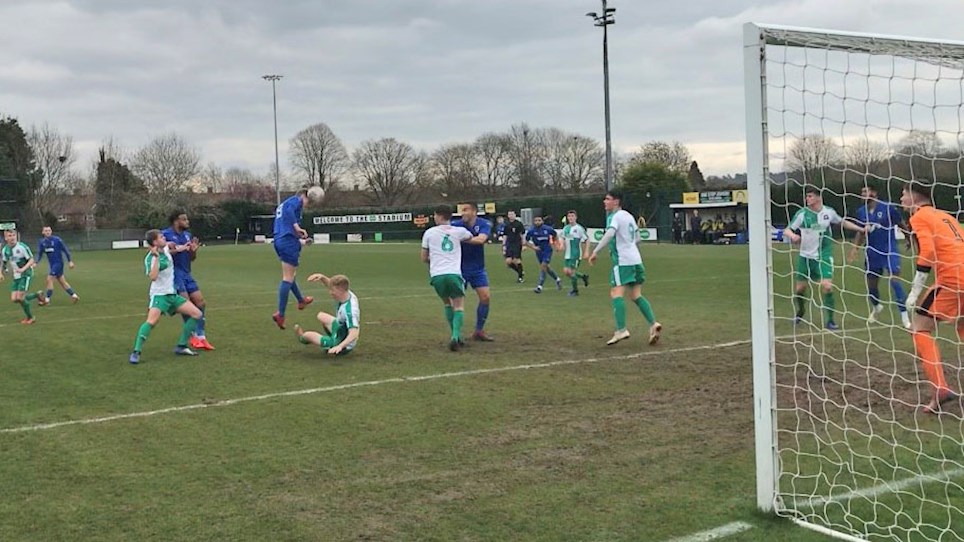 Dons to take on Rovers in Central League


AFC Wimbledon's development squad are back in action on Tuesday with a Central League match against Forest Green Rovers.

James Hanson took another step towards full fitness and provided a timely reminder of his aerial ability during a 60-minute run-out for our development squad against Forest Green.

Though the 6-0 win was achieved with a far more experienced team than the opponents from Gloucestershire, the manner of performance was very encouraging with first-team players staking their claims to be a part of Wally Downes’s plans. In particular, Hanson (pictured) provided a demonstration of what could provide an extra dimension to Wimbledon’s attack during the all-important run-in. Hanson, who scored late on against Gillingham as a substitute on Saturday, hit the back of the net with a fantastic header during the first-half and led the line well, before being replaced on the hour.

For the second successive Tuesday, AFC Wimbledon selected a very strong side for a Central League match. In an experienced line-up, James Hanson was joined in the team by Andy Barcham, Tom Soares, and Jake Jervis with only three out of the Wimbledon 11 yet to play in the English Football League. In contrast, it was a young Forest Green side in opposition as it contained just three players with league experience.

Wimbledon made a bright start and it was 1-0 in the fourth minute. Jervis was fouled just inside the area and he took the penalty himself with plenty of confidence, smashing it right down the centre with Rovers goalkeeper James Montgomery well beaten. There was no let-up from Wimbledon after taking the lead and the advantage was doubled in the seventh minute when Joseph Felix won the ball off Rovers defender Isaiah Jones and then blasted home into the top corner. Shortly afterwards, it was almost three when Hanson got to a through ball from Tom Soares before the keeper, but his shot was just wide.

In a first 20 minutes dominated by Wimbledon, Pinnock almost scored a cracker, meeting a cross with a superb overhead kick, but his effort flashed just over the crossbar. Wimbledon pressed high, making it difficult for the visitors from the outset, and Soares, who captained the side, helped establish good possession in midfield. It was therefore no surprise when Wimbledon increased the advantage to three in the 34th minute and it was a fine goal too. Hanson’s lovely ball put Barcham clean through and he finished emphatically with a fierce drive that left Montgomery with no chance. Four minutes later, it was 4-0, as Hanson turned from provider to scorer. Pinnock’s delivery from a corner on the left was superb and Hanson gave it the finish it deserved with a bullet of a header, almost bursting the net!

As we approached half-time, Wimbledon continued to exert pressure and Pinnock tried his luck from a 30-yard free-kick, the ball just curling off target. However, Pinnock didn’t have long to wait to get his name on the scoresheet. After a good set-up from Barcham, Pinnock struck a sublime curler from the edge of the area that left Montgomery with no chance. That goal came in the 45th minute and it capped an impressive first-half display from Wimbledon.

Wimbledon approached the second-half with the same zest as the first-half. Just seconds after the re-start came another chance for Pinnock, but he was denied by a fine save from Montgomery. The pressure continued and left-back James O’Halloran twice did really well to get beyond Barcham and send over crosses that picked out Hanson, but on both occasions Montgomery got down well to save.

With an hour gone, Alan Reeves made his first change with Hanson the man to make way, as he was replaced by Bobby Mills. Despite playing against inexperienced defenders, it had been a more than useful work-out for Hanson, who showed that he could be an asset for Wimbledon during the run-in. Rovers had fared much better in limiting the damage during the second-half, but it was almost six when Felix shot just over from outside the area.

In a game when Joe McDonnell had little to do, the Dons keeper produced a fine save to deny Oliver Artwell a consolation for Rovers. Under-18s defender Reuben Collins also didn’t put a foot wrong whenever Rovers did threaten to get one back. However, Wimbledon showed no mercy at the other end by striking a sixth with 13 minutes to go. Yet again, it came from another superb Pinnock delivery from the corner, his cross this time picking out Jervis, who notched his second with a lovely first-time shot. Barcham produced a trademark burst down the left flank, beating two or three men with lovely skill, before being denied by Montgomery. In the end, Dons fans in attendance had to settle for just the six! In summary, it was a more than useful exercise on the day with first-team players enhancing their claims to be involved in AFC Wimbledon’s battle for League One survival.

Dons to take on Rovers in Central League


AFC Wimbledon's development squad are back in action on Tuesday with a Central League match against Forest Green Rovers.