In the second feature of our series on volunteers involved with the Dons Local Action Group, we talked to Cormac van der Hoeven about his work in the community.

Cormac spoke about the initial intention to provide a community resource outside the Alexandra Pub in Wimbledon, but the operation is now helping vulnerable people in Merton, Kingston, and Wandsworth, on a daily basis. Cormac always seems to be snapped by our club photographer on matchdays and despite the lack of football, you may have noticed him once or twice in recent weeks on our social media channels! Our Pro Sports Images snapper Matt Redman even bumped into Cormac by chance in Wandsworth recently and he couldn't resist taking another picture!

What are the main jobs that you have been doing?

"My usual day at the moment is very frantic. Essentially, I’m involved in the setting up of stalls outside the supermarkets. I have initial conversations with the managers and on the first day or so of the collection point operating I help out at the stall, showing volunteers how it works, and just making sure that we have a good presence in that community, before we push on to another base.

“One thing I’ve noticed is the positive engagement we are having with people who are having a tough time. That’s a very important aspect of it. In the first couple of days at a new base people are coming up and asking questions, so we pass on our contact details and offer our help. It allows us to stretch our volunteer team into different areas. From day one, people have been so willing to step forward and volunteer to help those who are struggling in the community.” 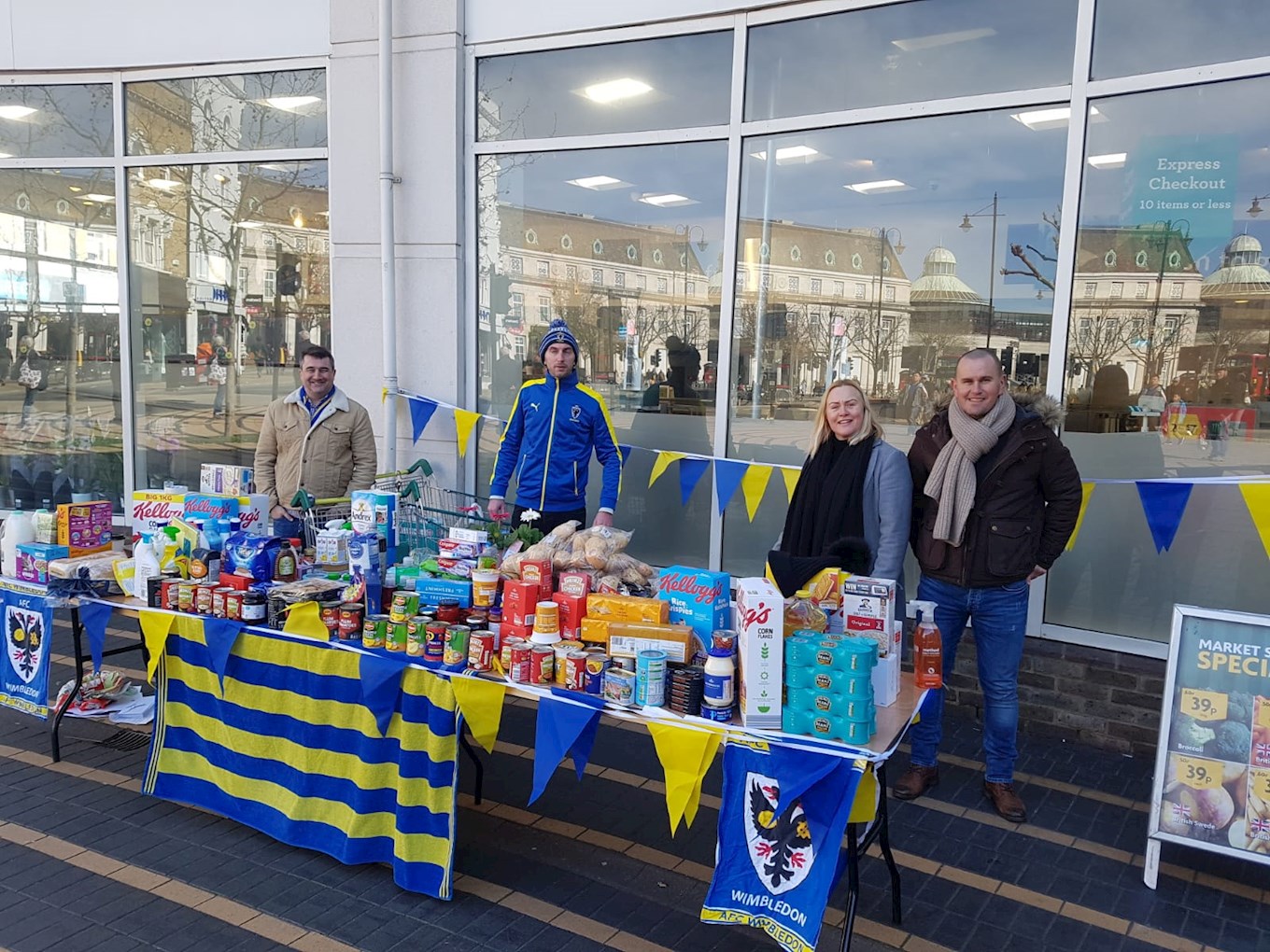 Where have you been carrying out your volunteer duties?

“I’ve been everywhere! I’ve been involved from day one. One mistake I did make recently was that Xavier had a list of volunteers to replace me outside Sainsbury’s in Putney after I set-up there. It was only after six hours that I realised I had spent my time at Sainsbury’s in Fulham and in completely the wrong spot! I’ve been stretched as I’ve been working in Merton, Kingston, and Wandsworth. The cooperation with local councils has been marvellous, allowing us to get to more sites and be a visible presence. That visibility allows us to spread the word more about what we are doing. With my work across the three boroughs, there hasn’t been a normal day for Cormac!”

How has this filled the gap for you from doing your normal job?

"I am a local school teacher at Wimbledon College and the one thing I’ve really noticed is the amount of young people getting involved. Obviously, they still have online learning to do, but this is also something they can get involved with. The headteacher at our college has been an absolute star in terms of helping to promote our campaign and other teachers have been great in terms of stepping forward to volunteer. I’m also getting to know more parents with children at Wimbledon College as they are volunteering too. As a teacher, a big part of my job usually is interacting with people and I miss that, but I’m really thankful that I have a skill-set that can help with this project. It’s really inspiring to be involved in this project.”

Why did you get involved?

“As a local schoolteacher, I’m very aware of foodbank levels during the summer holidays. There are a lot of family referrals and it is a strain for some families. Obviously, we are in challenging times now, so families will also be struggling. Xavier Wiggins has been fantastic in the way he’s helped to organise this, showing so much energy after playing a key part with the Plough Lane Bond.

“When we first knew that lockdown was coming, we were hearing about some of the problems that people were facing and we wanted to help. Initially, the plan was just to have a base outside the Alexandra Pub in Wimbledon town centre. We aimed to help out in Wimbledon, but when we heard that so many volunteers were offering to assist we had the idea to expand what we were doing into other areas. People’s warmth in the community, to help out at this difficult time, has been overwhelming.”

With over 400 volunteers now helping out, how proud are you to be involved in this community project?

“I feel really proud, particularly after what I’ve learned from being on the inside of the Dons Trust. There’s a real connection with what we are doing now because we are a community club. I got to know more about all the unsung heroes that we have at AFC Wimbledon. As a small club, there’s a real strain on the working hours for people behind the scenes, and the volunteer network at our club is just phenomenal. People like Jane Lonsdale and Mark Davis put in so many hours for the club and the effort that our fans put in is fantastic.

“It always strikes me at AFC Wimbledon that maybe the real icons at the club are the fans. The Plough Lane Bond was driven by the fans and there was so much dynamism with everyone getting involved with the campaign. I feel very proud and I almost feel like I’m building on the legacy of our fans. It just seemed like the most natural things to do: to get out into the community, and to help vulnerable people, work with Old Ruts and other organisations, in a combined effort.

“I can’t wait to go back and watch the football. It’s the players that we all love and worship at 3 pm on a Saturday, but I genuinely think that my heroes are now the fans. With this project, we are adding another great chapter to what fans can achieve.” 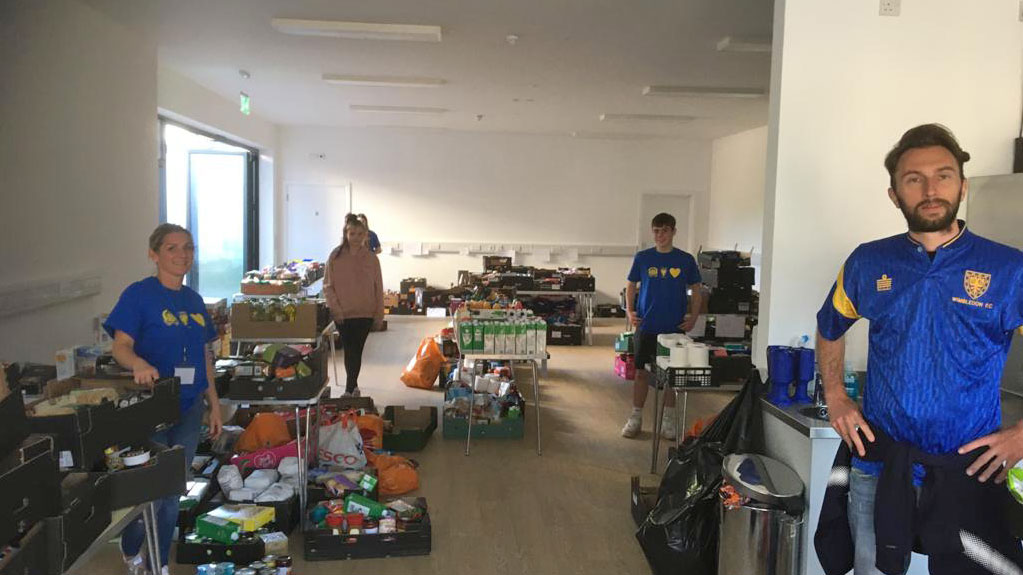 We’ve also heard about fans of other clubs getting involved?

“I’ve had huge respect for Fulham as a club over the years and some of my Fulham mates have been doing their bit to help. The initial group we had was made up of mainly AFC Wimbledon fans, but fans of other clubs have been coming up to engage about the project and help out. A West Ham supporter came up to me and mentioned about how disgruntled he was with his club. He lives just around the corner from Plough Lane and because of what he’s seen in the last few weeks he’s thinking of coming to watch us.

What would your advice be to those thinking of getting involved?

“Those involved have talked about what it means to them and it really sums up the power of volunteering. It shows how much they’ve enjoyed it and some of their stories about helping people have been overwhelming. Volunteering for this project gives you a real purpose at this time and gives you that satisfaction of helping others to come through difficulties. Some fans including Anthony Circuit have been volunteering every day. It’s quite amusing when you think of all the great away days we’ve enjoyed together when we’ve ended up a bit worse for wear, but now we are doing something completely different for a great cause. We are harnessing people’s creativity in terms of ideas to help the vulnerable and I would recommend getting involved to anyone.

“To be honest, I haven’t got time to miss football! This project and the scale of it is all-consuming, but it’s also very satisfying. We all have to respect the government guidelines. There are friends who I go to the game with and I haven't seen them once during this total madness. Every week we are delivering to vulnerable people who are self-isolating and have no people around them. David Williamson, who lives in Beckenham, heard about us on the radio and now one of our volunteers Rob Lowe is delivering food parcels to him. Rob stands there a couple of yards from the window and talks to him about football for an hour! He’s also been giving him old programmes and books. For me, that has been a beautiful part of it.”

You can get involved by contacting the Dons Local Action Group on 020 3301 4511 (9am-6pm), or you can e-mail dla@afcwimbledonfoundation.org.uk .