In his round-up for April, Academy Manager Michael Hamilton provided an insight on continuing support and education for Wimbledon’s young talents during the current crisis.

Academy players have been interacting on Zoom with former Dons defender Darius Charles and coach Chris Powell, who has been working as part of Gareth Southgate's backroom team with England. Both Darius and Chris provided inspiration to our young talents at a difficult time and Michael’s full monthly update is below.

To keep our Academy players active, we’ve set-up programmes for all our footballers from the age of Under-9s through to Under-18s. For the latter group, their programmes are more based on the physical aspect, so that they can use their own bodyweight and do exercises on their own, either at home or in public places. For our younger schoolboy players, their work is a bit more technical. They are set skills work to practice on their own, but they do also have a basic physical programme to support their age relative growth. Alongside this, all players receive two online sessions a week, which have included Will Rose (Lead Physical Performance Coach) taking boys through some physical sessions, Jenna Richards (Lead Sports Science and Medicine Manager) going through core and mobilisation exercises, and Daniella Osu (Academy Performance Support Consultant) looking at the psychological side, for example growth mindset and personal growth.

To support the programme, we’ve had some external speakers come in as guests, including staff from the PFA (Professional Football Association), ex-professional footballer and current England national coach Chris Powell, and former AFC Wimbledon defender Darius Charles, who is now playing at Wycombe Wanderers. Darius spoke to the boys about seeing the positives and making the most of all situations, whilst Chris provided a very powerful insight into the game at international and Premier League level as he also played in the top-flight.

With our vision of working towards a player-centered programme, we’ve also had some of the older boys lead sessions for some of the younger age groups, which will aid the boys in their self-managing development. Under-18s centre forward David Fisher said: “I thought that Chris gave us not just his experiences as a player, but also as a manager, due to his many years in the game in both roles. This helps us as young players because he gave examples of the levels that the top professionals reach and the levels required for us to gain the gaffer’s trust and to make it in the game.”

Speaking on the session provided by Darius Charles, Dylan Adjei-Hersey said: “It provided a great insight into the reality of some setbacks you may have to overcome and, more importantly, how to come back from them. It made me think that every opportunity is an opportunity and even if I’m called up to train with the first team just to ‘make up the numbers’, I have to show them my ability.” 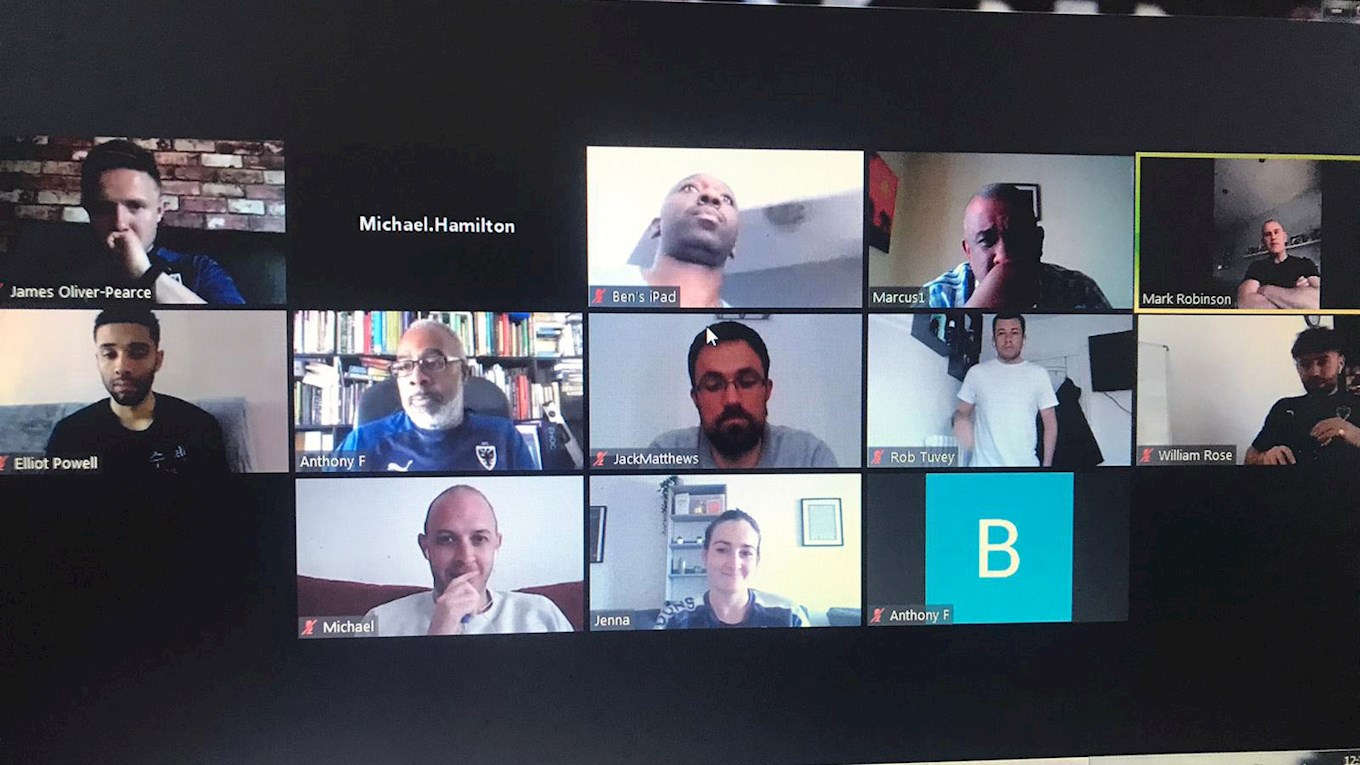 Although the majority of our staff are currently furloughed and unable to work, we have a responsibility as a club to support their well-being. Alongside that, we’ve been able to provide development opportunities for them, managed by our Academy Head of Coaching Anthony Ferguson.

Alongside regular check-ins to see how they are, we’ve been fortunate to have a couple of workshops, hosted by North West FA Regional Coach Mentor manager Steve Smithies, who spoke to staff about reflection techniques, providing us with methods to be more effective with how we review and reflect.

We also had a two-part workshop on attacking play, hosted by FA Coach Developer Geoff Noonan and ex-Manchester United Academy Coach Paul McGuiness. During Paul’s time at Man United, he saw 86 players go on to make their first-team debuts and 23 become full internationals, including the likes of Paul Pogba and Danny Welbeck.

Anthony Ferguson said: “Personal and professional development is key to supporting everyone, especially our studious coaches and players during this uncertain time. Our environment is a thriving one and so inspiring our coaches and players to think about ‘what, why and how’ we do things is very important to me, so I want to maintain engagement and increase our ‘positive-programming’.

“It is also critical that we reflect effectively, listen and learn from each other, and the experiences of experts in various fields, to be able to benefit and successfully develop the players in our care. I felt that Chris Powell, Steve Smithies, Paul McGuinness and Geoff Noonan would open up an avenue of relative and outer-dimensional thinking and support us to continue our very healthy inter-disciplinary debates.

“Judging by the response and feedback, the workshops have proven to have met expectations and we look forward to seeing how this engagement manifests over time in helping to achieve our vision”.