Though the appointment of Allen Batsford as Wimbledon’s new manager in 1974 had transformed fortunes on the field, it had done little for the club’s financial health.

We’ve been featuring key historical moments in Wimbledon’s history at a time when the club is gearing up for a return to its spiritual home and today we look at the memorable 1974/75 campaign, which included an unforgettable FA Cup run and winning the Southern League title.

Wimbledon players are pictured celebrating in the home dressing room at Plough Lane with the Southern League shield after the Telford game on 1 May 1975.

An energy-sapping 70 game campaign had made the Wimbledon squad household names and earned the team their first Southern League crown. With a basic squad of just 12 players, manager Allen Batsford fused the seven men he had inherited when he took over at Wimbledon in the summer of 1974 with five others he had brought from his previous club Walton & Hersham. That approach formed one of the most formidable winning machines non-league football had ever seen.

Brilliant performances at First Division Burnley and Leeds in the FA Cup brought nationwide fame, but the dogged determination of the side as they cleared a backlog of fixtures by playing three games a week during the last 12 weeks of the season was remarkable to behold. But if the performances on the pitch were highly professional, behind the scenes the club was still a largely amateur affair.

Almost a decade had passed since major improvements had been made to Plough Lane and despite a share of a combined ‘gate’ of over 90,000 from the two televised games with league champions Leeds, the club barely broke even. The directors’ campaign to join Division Four was lacklustre and the club received just four votes at the Football League’s AGM in June. The greatest season in the club’s history had ended in bitter disappointment.

The picture below shows Wimbledon attacking the Telford goal on the night the team were presented with the Southern League championship shield. 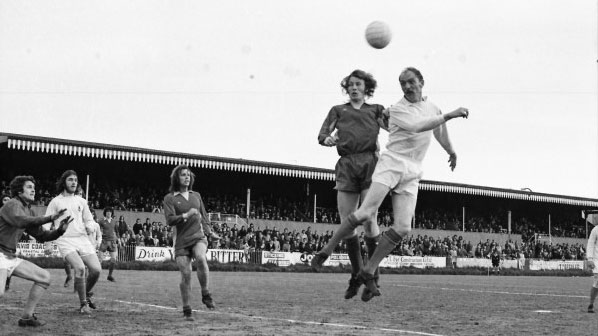