With Wimbledon returning to the club’s spiritual home, we’ve been turning the clock back to key moments from our first era at Plough Lane.

The picture above shows club chairman Sydney Black symbolically handing over the deeds of Plough Lane to his deputy, Fred Gregory, on 16 November 1959, The club’s benefactor had bought the ground from the local council and wanted to ensure it was valuable to the club in perpetuity.

Having won every honour in the amateur game, the Dons turned professional in 1964 and joined the Southern League with the aim of winning a place in Division Four.

Even his deep pockets could not bring about the success he craved. Having spent a decade lavishing money on transforming the stadium, during the mid 1960s chairman Sydney Black invested his cash into creating a team to win a place in the Football League. Up against similarly ambitious outfits such as Cambridge United and Chelmsford City, the Dons were never quite good enough to claim the Southern League crown.

They came closest during the spring 1968 when Les Henley’s Dons fell at the final hurdle, beaten 1-2 at Plough Lane by Chelmsford City meaning the title went to Essex. But weeks before tragedy had struck the club when Black died aged just 59. After years when the difference between what the club earned through gate and spent on wages was made up at the end of each season by a cheque from the chairman, the club now had to face harsh financial reality.

By the early 1970s crowds had declined alarmingly and the Dons were close to going bust. “Life is rather difficult for the football club,” treasurer Stan Jasper told a supporters’ club meeting in 1970 that had been arranged to hand over a cheque for £2,250 to the parent club. “We need you to raise a very substantial amount more money this year. We are doing all we can to control costs but to achieve anything we must have your maximum support over the next 12 months.”

The picture below (taken on 4th May 1968) shows Tommy McCready tangling with Chelmsford’s Tony Butcher in a Southern League title decider played in front of a crowd of more than 5,000 at Plough Lane. 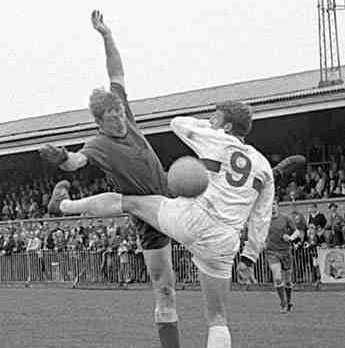