Following the announcement of our fixtures for season 2020/21, we are building up to the big kick-off by recalling memorable matches against our scheduled opponents.

Next season will be Wimbledon’s fifth successive campaign in League One after promotion at Wembley back in 2016.

For today’s feature, we delve back into the archives to another season of non league domination as election to the league continued to prove elusive for Wimbledon.

Prior to meeting the Brewers at Football League level in recent years, the Dons were regular Southern League adversaries of Burton during the 1960s and 70s. Here we recall a match during Wimbledon’s Southern League double winning year.

With the Southern League championship flag flying proudly over the south stand at Plough Lane, the picture above shows Ian Cooke makes the score 3-0 on the stroke of half time.

It was measure of his perfectionism that manager Allen Batsford used the word “disgraceful” to describe his team’s performance in thrashing Burton Albion 4-0 at Plough Lane 45 years ago. Having completely overhauled the Wimbledon side the previous year and landed the club’s first ever Southern League title, the former Walton and Hersham chief was determined to avoid complacency as his side set out to retain their crown.

“We started off pretty much as we had left off the previous season by winning a lot of games,” 1976 Player of the Year Jeff Bryant recalled recently. “Allen drove us on to keep our standards high and it was only around Christmas that we had a bit of wobble in the league and we went out of the FA Trophy at Dagenham. After that we knuckled down and only lost once in 25 games to win the Southern League and Cup double.”

Back then, ambitious clubs had to be elected to the Football League. After months of lobbying, a Yeovil Town side that had finished runners up to the Dons in both league and cup came within three votes of dislodging Workington, the Fourth Division’s bottom side. Having been ignored, it took the arrival of new chairman Ron Noades and a professional marketing campaign to ensure the outcome was different when Batsford’s men completed a hat trick of titles 12 month later.

The picture below shows Mick Mahon scoring the second goal from the spot in the victory against Burton. 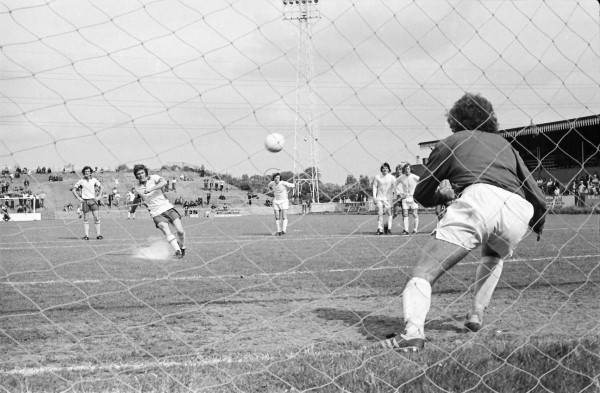