Helping his team to avoid another Dutch humiliation proved to be a turning point in Mark Robinson’s life as it led him towards a coaching career in football.

Our Lead Professional Phase Coach and Loans Manager sat down with our Vice President Iain McNay for an extensive interview that you can watch on Cherry Red.TV. Mark’s route into coaching was certainly not a conventional one and he turned his back on a highly promising career in sales, which involved a completely different life in London’s West End!

“I worked for the Performing Rights Society, which involved collecting royalties that are distributed to the writers and composers,” Mark recalled. “There were a lot of people that didn’t want a licence, they would go to court, and it was always costing the company money. So PRS decided that they wanted to go more down the sales route. I remember going into a pub in Brixton and a guy said to me you have two minutes to get out of my pub or I am going to chop you up. The sales skills I had learned were all about ‘can I get this person to talk? I looked at it as a challenge and I ended up coming away from there with about £600. The pub then put on live music events.

“It ended up being a fantastic job because the company gave me the West End area to do as well. It was great because I ended up doing that on foot. I was getting up at seven or eight in the morning, and walking across Waterloo Bridge. I was getting invited to the openings of nightclubs, restaurants, and I made some great friends. Fundamentally, I was taking hundreds or thousands of pounds off them, but it was putting a value behind it, and making them realise how powerful music is and how it can work for them. It all grew and we would put them in touch with promoters who put on live music and events. It was a fantastic grounding towards my coaching career.

“I used to say to my wife that I wanted to coach and I was doing little bits at youth clubs. The PRS used to play a game of football against their Dutch counterparts, but I had never played in any of the games because of my injuries. Every year they used to get smashed because the Dutch were playing their total football. I got to the stage of being able to have kickabouts in Regents Park and some of the lads said ‘we are playing them again in five or six weeks, could you put some training sessions on?’ I asked them how the Dutch team normally played, so we did a press and worked on communication. We went over there and we won. I remember the elation from the lads and we went for a meal with the Dutch lads afterwards. They said ‘you were a different side this year’. I thought, ‘I can do this, I’ve got something in me, I need to do this’. It was tough because I had a really well paid job and two young children, but I just had this desire to coach.” 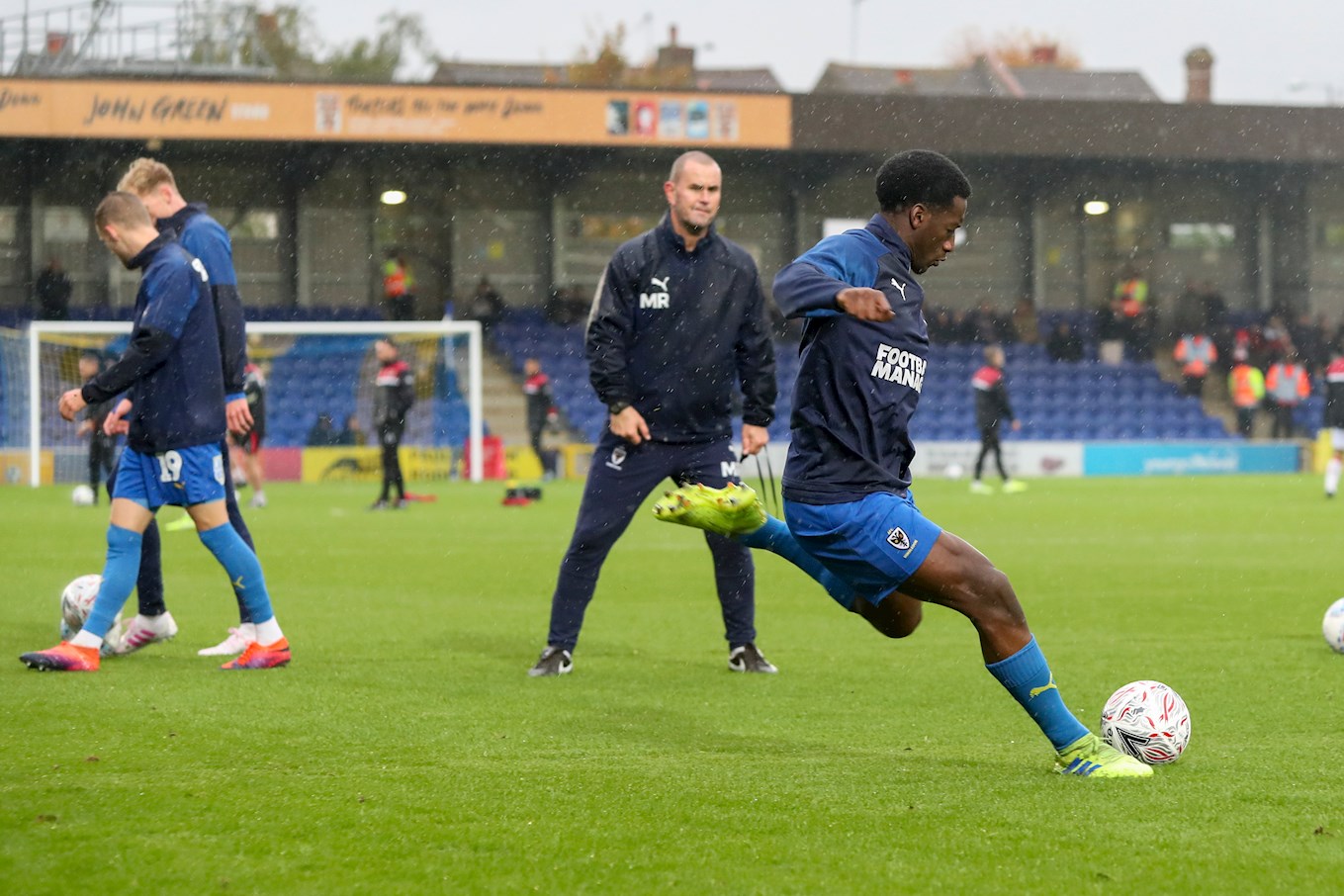 Almost two decades on and Mark, who had his playing career hindered by injuries as a youngster at Fulham, believes the life skills he learned out of football made him the coach he is today. Instrumental in pushing our academy forward, Mark twice guided our Under-18s into the FA Youth Cup last-16, producing teams that really caught the imagination of our supporters.

“No matter who you play I always think that 80 per cent should be about you,” said Mark. “If you are going to produce a team and develop players who are really confident and you spend too much time talking about the opposition, I don’t see that as a way forward. Obviously, I am talking here about youth and development level. If I’m telling someone that he is a fantastic player, but then for 60 per cent of the time in a training session I am talking about what the opposition are going to do, the two things don’t translate. We always worked on 80 per cent being about us and 20 per cent on the opposition.

"We took that into the FA Youth Cup. Part of that was at corners and we would say ‘there is one ball, we are going to win it, and we leave three up’. It was just that positive way of thinking. I can’t say that if I was a first-team manager I would do that, but it was just that positive way of thinking, of saying to the boys, ‘listen, we are always on the front foot, and we believe in what we are going to do, we are always going to take the game to the opposition no matter who we play'. It was just part of the process of making them believe in themselves.

“There was a certain style of football that Wimbledon played in the 1980s but they did it brilliantly with some great technicians. There were players out of those Wimbledon sides that went onto play a very different style of football because they were very good technicians. It wasn’t long ball without a purpose. It was part of my role, and Nigel (Higgs) made it very clear to me that the academy had to produce players, but we also had to stick with the values of the club. I think the style of football might have been different, but it was always important to me that the fans that came and watched would see traits of a Wimbledon side they could identify with. 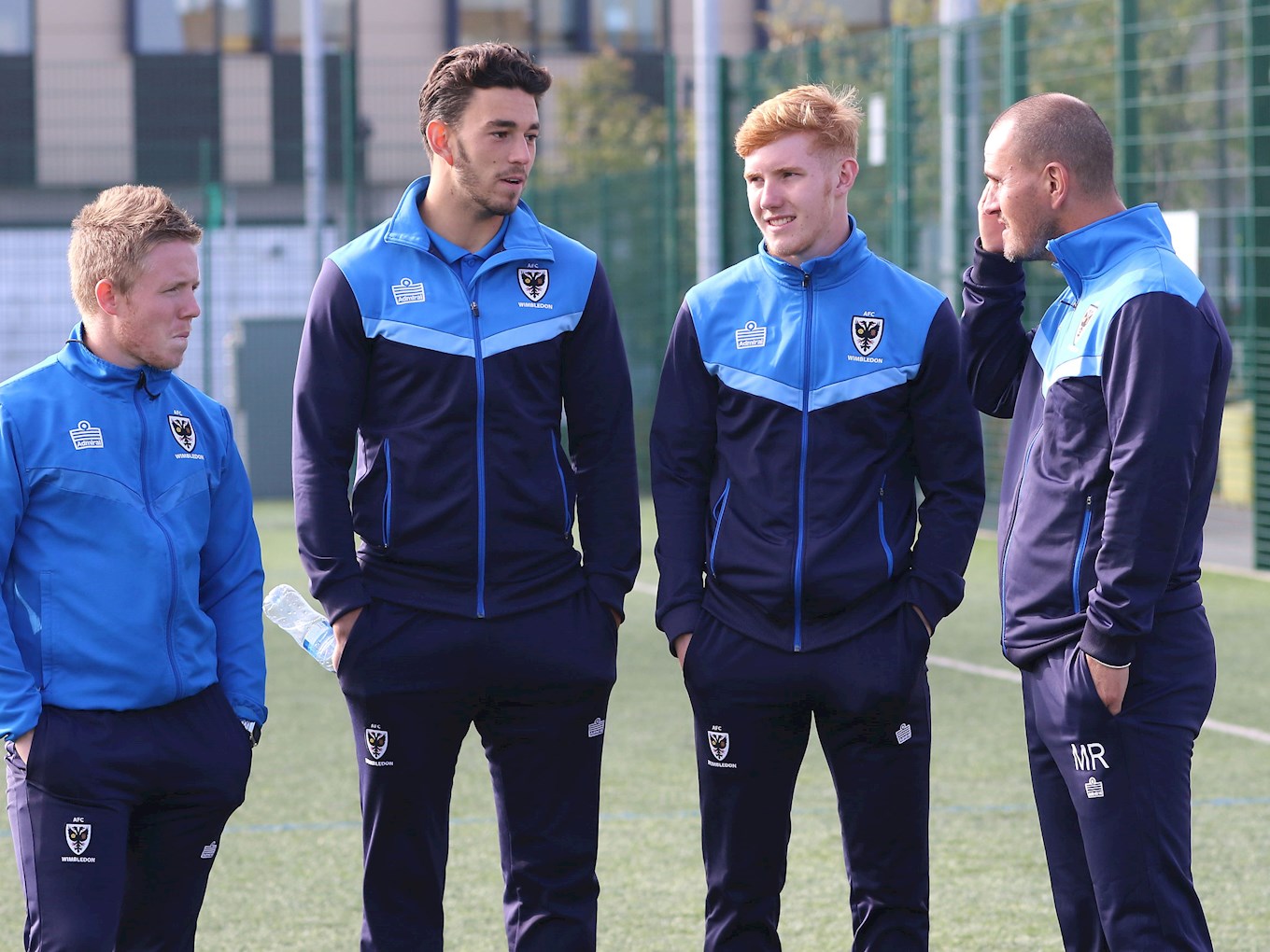 “A lot of people have talked about that year (FA Youth Cup run in 2016) and how many fans bought into it. They could identify with the side and what was happening on the pitch – the intensity of how they pressed and the togetherness – and how they talked about the club afterwards. This wasn’t forced, I didn’t say that when you get interviewed you have to talk about how much you love the club. It was part of their education and the process, they felt like that about the club. When Alfie (Egan) was interviewed after Watford and said ‘we don’t care who we play’ that was just what those boys were about. They really didn’t care who they were playing.

“You can be a quiet lad who is very talented and it doesn’t mean to say he can’t have a career in the game, just because he’s not a chest-pumper. I think it’s definitely changing and people are realising that everyone is different and everyone’s journey is different. That leads into my role now as Loans Manager and what I want to educate people about. I think we’ve lost a lot of players in the past because they haven’t been given that extra time to develop or there is something in their pathway that hasn’t quite worked well enough. That has maybe hindered their development.”

Brought up as a Chelsea supporter, Mark recalled the night when he fell in love with AFC Wimbledon after attending a memorable play-off match – the 3-1 victory against AFC Hornchurch in 2008.

“I hadn’t been to a match and Nigel said ‘why haven’t you been to a game?’ I went to the semi-final at home when we got promoted out of the Ryman Premier. I just remember turning up and it was so much more than I expected. I stood at what was then the Tempest End and I thought, ‘Wow’. It gave me goosebumps. At the end, the fans all started singing ‘Take my hand….I can’t help falling in love with you'. It was weird because I had lost my Dad not long before and I thought of the values that he had put in me as a football fan. I can’t lie and I’m from a Chelsea family, but I just thought ‘he would have loved this’. This was everything that he thought football was about. If someone had said to me when I was a kid growing up that you could ever love another football club I would have been one of those people who said ‘don’t be stupid’. With Wimbledon, it felt like a mission and everything that football should be about, you could feel it with the fans. From then on, I just fell in love with the club more and more.”

The full interview with Mark is well worth watching. Take a look below at the video of Mark’s extensive chat with Iain.