Assal produced a lovely finish five minutes from time to secure a 2-1 victory in Wimbledon's second pre-season friendly, which was again played behind closed doors. The Dons had fallen behind in the first-half through a cracking goal by Craig McGee, before Alex Woodyard restored parity with his first Wimbledon goal.

Glyn Hodges selected a starting 11 consisting largely of first-team regulars, though Under-18 forward David Fisher was given an opportunity to show that he can be a part of our future by joining Joe Pigott in attack. Isthmian League Premier Division side Leatherhead included former Wimbledon defender Will Salmon, who had been one of Terry Brown’s first signings back in 2007.

Wimbledon dominated possession in the early exchanges, but it was proving difficult to create anything of note against a well-drilled Leatherhead defence. There was a hint of a chance in the 17th minute when Anthony Hartigan sent over a dangerous cross from a corner that picked out Joe Pigott, but his header flashed over the crossbar. By the time of the first drinks break midway through the first-half, it was still 0-0 and Leatherhead had coped well with Wimbledon’s pressure.

The Dons put together the best move so far in the 28th minute. Cheye Alexander found space on the right, before picking out Luke O’Neill, who sent over a superb cross that deserved a goal, but Nesta Guinness-Walker volleyed over the crossbar. The hosts marched into a surprise lead in the 31st minute with a goal fit to grace any stage. Craig McGee struck a fierce 20-yard drive that left Nik Tzanev with absolutely no chance, the Dons keeper beaten with Leatherhead’s first attempt at goal in the match. The Dons had an opportunity to equalise almost immediately when Alex Woodyard showed good awareness to pick out Fisher, but his shot was saved by Zaki Oualah, who was playing against us just a few days after being our first-half keeper against Corinthian Casuals.

The Dons stepped it up in the period before half-time and reward came in the 43rd minute with a well-worked goal. Guinness-Walker, who had consistently found space in advanced areas on the left, cut the ball back well for Woodyard and the midfielder finished emphatically to net his first Wimbledon goal. It had been a decent response from Wimbledon after conceding a surprise opener.

At the start of the second-half, Wimbledon piled men forward, but Leatherhead held firm and the hosts were almost in front for the second time when McGhee struck a powerful free-kick from an acute angle that Matthew Cox saved at his near post. Young Dons forward Fisher, who had shown promise throughout, then tried his luck from 25 yards and it was a rasping drive, but it flashed into the side netting.

Glyn Hodges made a raft of changes on the hour with the remaining players that started all coming off after increasing their minutes during pre-season. The Dons started to increase the tempo after that injection of fresh blood with attacking dynamo Assal’s trickery leading the way. However, a quick Leatherhead break threatened to snatch victory for the hosts, but Terell Thomas made an important last-ditch block. At the other end, Adam Roscrow fired over the crossbar as the Dons searched for a late winner. That objective was achieved in style with five minutes to go when Shane McLoughlin sent through a superb defence-splitting pass to pick out Assal. There was still plenty to do when the pacy attacker latched onto the ball 35 yards out, but he showed an electric turn of foot before finishing emphatically.

There was still time in the final minutes for Assal to almost grab his second, but he was denied by the keeper after a fine through ball by Terell Thomas. When the final whistle shrilled it had certainly been a hard-earned win against a Leatherhead side that pushed Wimbledon all the way. It was a good work-out on the night and another important step towards the big kick-off on 12 September.

The picture above (taken by Trevor Williams) shows Nesta Guinness-Walker in first-half action at Leatherhead. 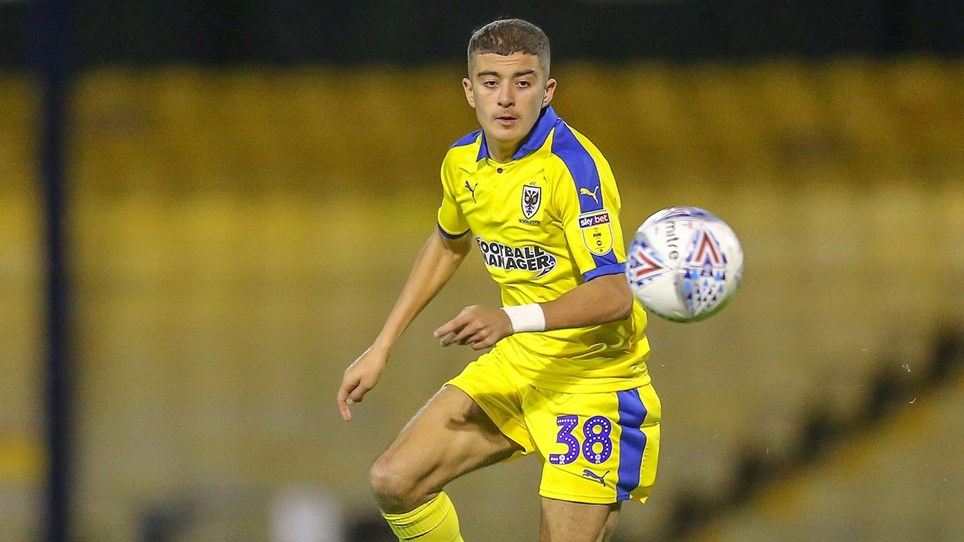 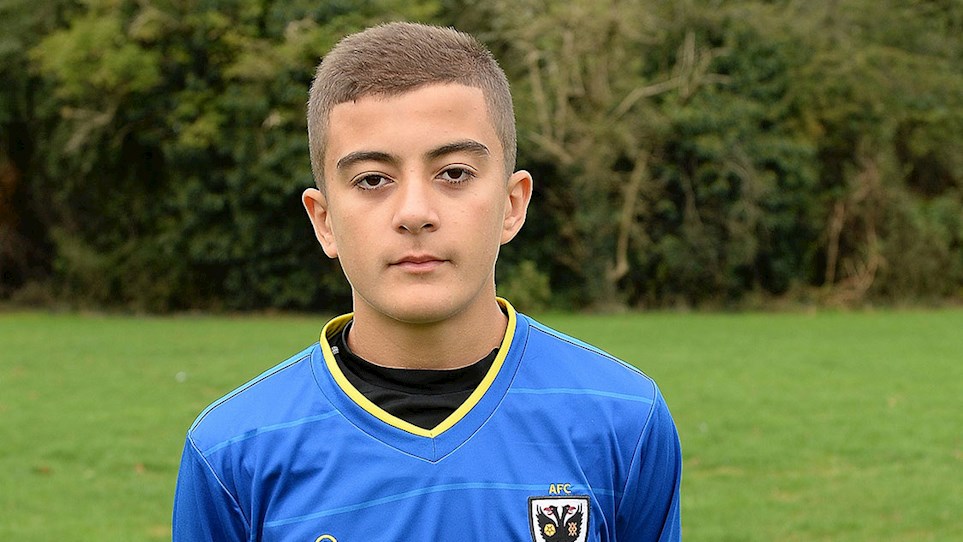 Young Dons rack up the goals to remain unbeaten


Ayoub Assal and Zach Robinson added to their impressive goal tallies, as the young Dons returned from a long trip to Devon with maximum points. 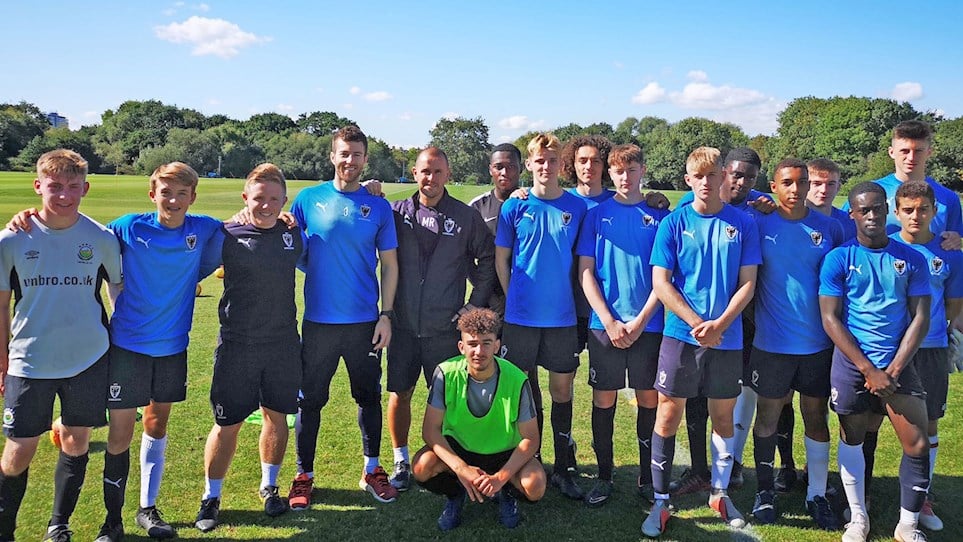 
Three second-half goals earned an impressive away victory for AFC Wimbledon Under-18s at Stevenage on Saturday. 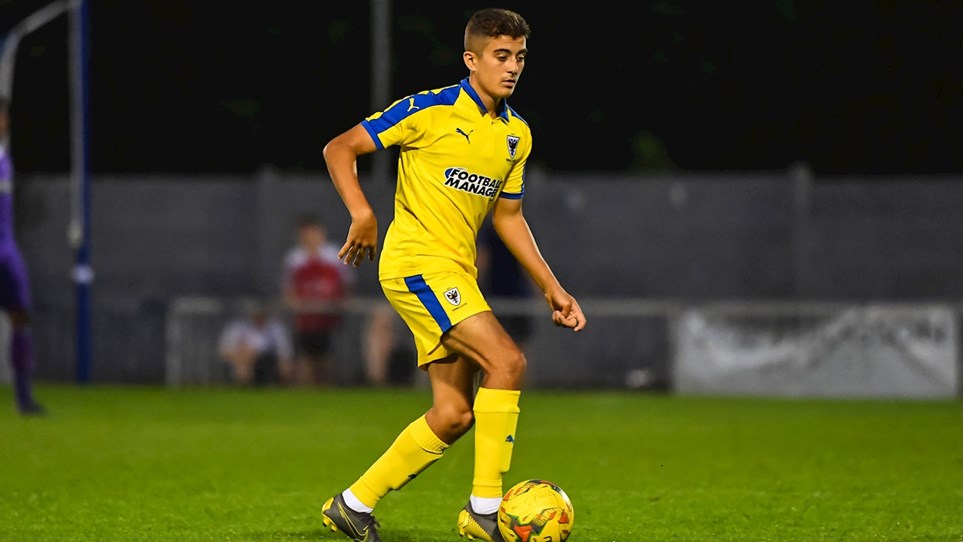 
AFC Wimbledon Under-18s hit the goal trail once again to maintain an impressive run of form.