Dons Local Action Group co-founder Xavier Wiggins has thanked every one of the volunteers that have made a big contribution to the local community during 2020.

Xavier summed up the remarkable achievements of DLAG, the volunteer organisation recently recognised with an award by the Sports Journalists’ Association, with the following message:

“As we approach this rather unusual Christmas after an equally strange year we would like to thank you all sincerely from the bottom of our hearts.  At DLAG and the AFC Wimbledon Foundation, we have moved mountains to tackle food, digital and furniture poverty in our three boroughs. We have learned so much. We have supported so many.

"It would have been much much harder without the brilliant backing of the Wimbledon fans at the centre of the whole project. And it has been truly wonderful to build new friendships across the community from Old Ruts to the Fresh Foodbank and from groups of school parents to whole streets. Humbling. Inspiring. And really all rather emotional. Then to win the SJA Award alongside Marcus Rashford, Lou Macari and Ebony Rainford-Brent. Well, what a massive honour for all involved.

"You should be so proud. Tackling 2020 in the way that we all have has taken every ounce of that immense Wimbledon spirit. We have something incredibly special going on at our football club and in the wider community. We are all contributing to one of football's greatest stories. We look forward to a 2021, a year when we will continue to attack challenges with gusto. As a DLAG collective we can't wait to grow more friendships and partnerships and to helping improve the welfare of our boroughs, with your ongoing support.

Since the formation of Dons Local Action Group – initially operating as a food resource for those in desperate need at the start of the Covid-19 crisis in this country - 1,800 volunteers have worked together in the boroughs of Kingston, Merton, and Wandsworth to deliver the following:

The above achievements would not have been possible without the fantastic contributions of so many people across a broad range of tasks, including:

The picture above shows volunteer Peter Maher (right) with DLAG co-founder Cormac van der Hoeven. Peter has been described as a ‘Wimbledon Legend’ by fellow volunteers at the group and all at AFC Wimbledon wish him a Happy Christmas at a time when he is in isolation at home.

In the run-up to Christmas the Dons Local Action Group’s volunteers have worked tirelessly, raising money to donate 500-plus toys to local children. In addition, a fantastic achievement is that toys have been delivered to four local hospitals with over 200 children getting Christmas gifts. Working alongside Coats for Christmas, DLAG donated winter clothing to 158 children across 67 families. The DLAG elves (in partnership with the AFC Wimbledon Foundation) really made sure everyone had at least something to smile about this year!

As recently reported on our official website, DLAG was honoured to be recognised as one of the Sports Journalists’ Association’s Sport for Social Change 2020 award winners! The quartet of winners included Marcus Rashford, Lou Macari and Ebony Rainford-Brent. SJA Chair, Ashley Broadley said: “The Dons Local Action Group’s work is a terrific example of the positive impact football clubs can have on local communities.” 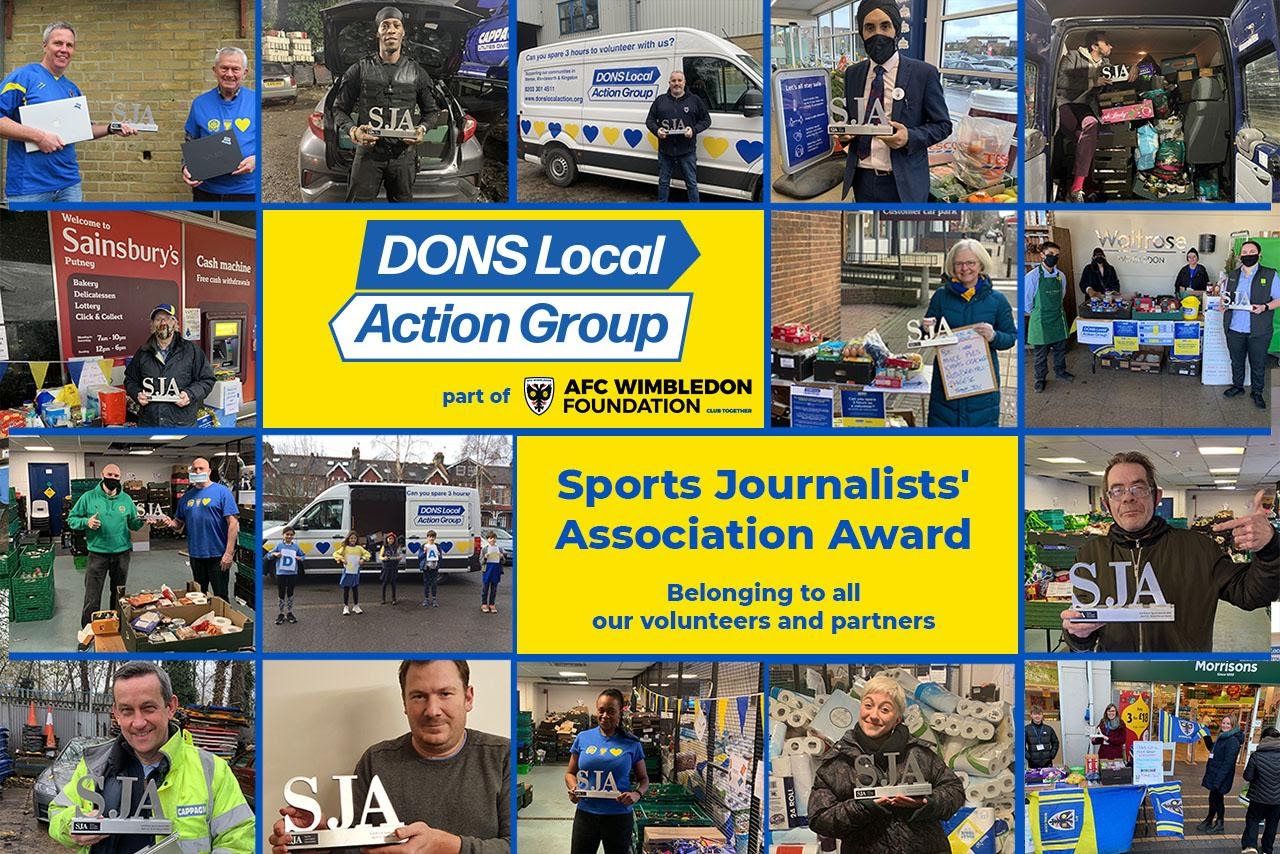 The Dons Local Action Group is very grateful to the kind people at Cappagh and the Old Rutlishians Sport Club for providing storage space for the DLAG hubs to distribute food to the community.

Can you help the Dons Local Action Group to continue its fantastic work during 2021?

COME ON YOU DONS!