Though he didn’t get his name on the scoresheet, Carl Leaburn earned plenty of plaudits after inspiring a fightback at Upton Park that is still warmly remembered by Dons supporters.

As part of his look back during July at memorable matches from the last 31 seasons, Stephen Crabtree, Editor of the Historical Don, selected an unforgettable evening when Wimbledon picked themselves off the canvas to land a famous victory.

Even by Wimbledon standards it was an extraordinary about turn. On the ropes after falling three goals behind by the 27th minute at West Ham, the Dons hit back to secure a remarkable triumph. Completely outclassed for the first half hour, Carl Leaburn was the focus of the Dons’ attack after the break and from his flick-ons and knock downs Joe Kinnear’s men ran riot.

Making his home debut, Ian Wright set up John Hartson’s 7th minute opener and then went on to net two goals himself to leave the Dons facing an embarrassingly heavy defeat. Marcus Gayle reduced the arrears before the visitors totally dominated the second half to score three goals and stun the home crowd. Jason Euell made the score 2-3 before Marcus Gayle levelled after a defensive mix-up. The turnaround was complete when Efan Ekoku headed the winner with ten minutes to go.

“That’s the best comeback away from home that I have been involved with in my ten years at the club,” manager Joe Kinnear purred. “I’ve got a great set of lads. I am really proud of them. It was never-say-die. I told them at half time that if we kept attacking they might cave in. Carl Leaburn was magnificent. He won everything in the air and frightened the life out of them.”

The picture below shows Efan Ekoku heading home the winner at Upton Park. 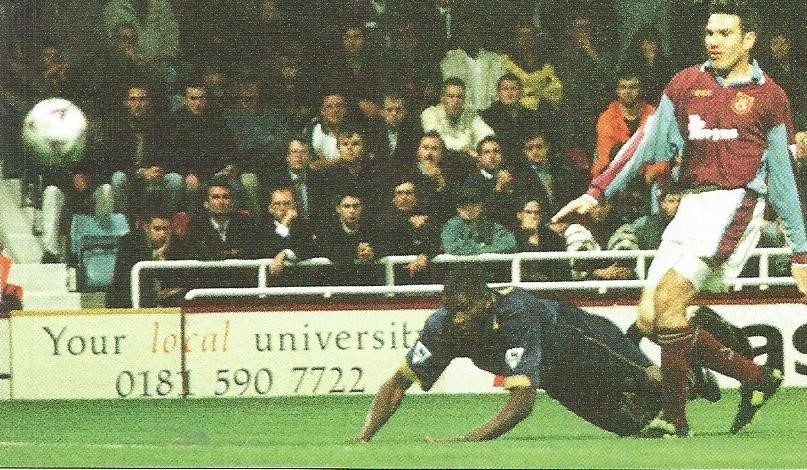