Potential Dons stars of the future are due back at the academy next week after a time that they will never forget as young footballers and one of our Under-18s decided to share one of his typical days in lockdown with us!

Ben Mason put together ‘A day in the life’ on video and it certainly shows his determination to become a professional footballer with his morning cycle starting well before 6.00 am! It’s followed by a morning work-out, an afternoon Zoom session to talk tactics with manager Rob Tuvey, and fitness work in his local park.

Having also been inspired by words of wisdom from Dons promotion hero Darius Charles and England coach Chris Powell – both talking to our young footballers via a Zoom group chat – Ben certainly made the most of his lockdown experience! Take a look at Ben’s video below.

Tenacious full-back Ben, who is starting the first year of his scholarship, recently featured in Academy Manager Michael Hamilton’s introduction to next season’s crop. Ben said: “I started to play football when I was five for Ascot United and I played there until I was 11 (when I came on trial at AFCW). I knew a bit about the club before from the famous 1988 FA Cup Final win, but after just a few months at AFC Wimbledon I started to realise what the club meant for everyone involved.” 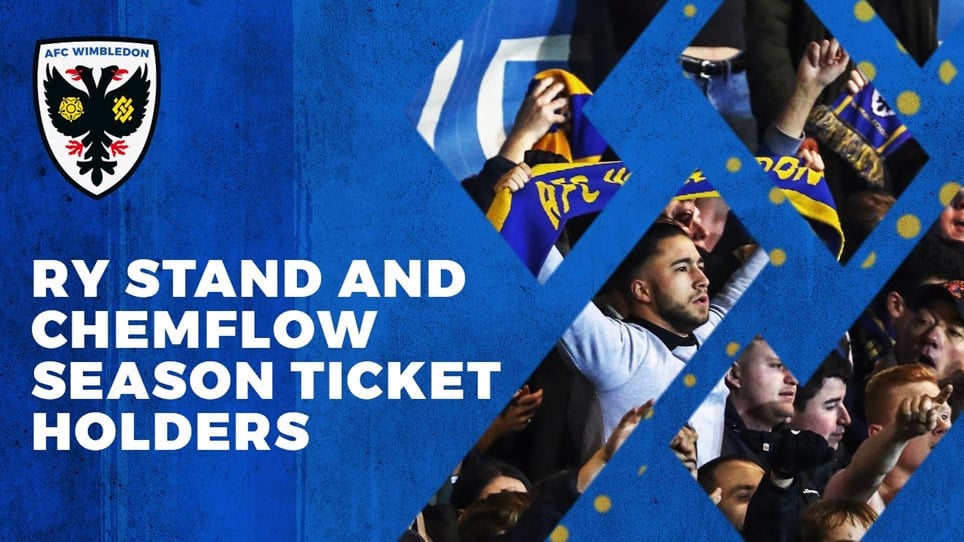 
Calling all ChemFlow and Ry Stand season ticket holders! This is a friendly reminder to sort out your seats at Plough Lane.


We would like to let everyone know that our ticket office will be operating at a substantially reduced capacity over the weekend and will only be able to deal with email enquiries. Our phone lines...