We are delighted to announce that Glyn Hodges has bolstered his squad for next season by completing the signing of right-back Cheye Alexander.

The 25-year-old has signed on the dotted line after leaving Barnet, where he spent two seasons playing for the National League club.

After tracking his progress last season, Glyn Hodges believes that Cheye has the right attributes to take the step-up to League One football in his stride.

“Cheye has good energy, he gets up and down the flank well, and has good crossing ability,” said Glyn. “We are delighted to get him on board, he’s very keen as well, and we are looking forward to working with him. Hopefully, he can put in some really positive performances and help us to progress together.

“Cheye is at a good age because he is hungry to progress in his career. Barnet play good football, in a similar way to us, and we’ve watched him several times. There are a lot of hidden gems in non league and we picked one up last summer with Nesta Guinness-Walker. Hopefully, Cheye can also make a good impact and add strength to our squad. With no regular matches at our level recently, our scouts have been putting together reports and Cheye was a player who came to our attention. Having also watched him live over a period of time, we were pleased when he became available. It is nice to get it done in time for pre-season. He was keen to come and we are delighted that he has signed.” 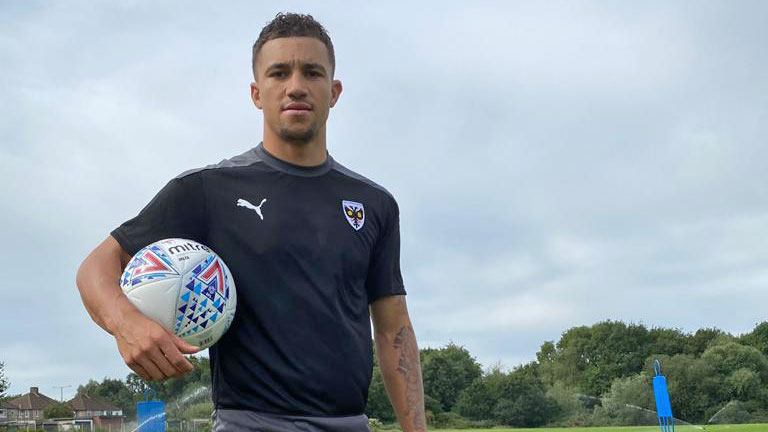 Cheye was a real favourite at Aldershot Town before moving to Barnet two years ago. His consistent performances on the right flank helped Aldershot into the National League play-offs in two successive seasons, The Shots beaten by Tranmere in the 2017 semi-finals.

After starting his career with West Ham, spending 10 years at the Hammers academy, Cheye has also had spells at Port Vale, Ilkeston Town, and Bishop’s Stortford.

Speaking about the move, Cheye said: “I couldn’t be happier, to come to a big club with a great support and I’m joining in an exciting year with the club moving to a new stadium.

“I worked hard last season to get Barnet in the position they are in now, and it came to a time when I had to make a decision: to continue and take part in the play-offs, or accept a new challenge and move into the league. My aspirations had always been to get into the league, so it was a no-brainer for me.”

Cheye met his new team-mates today at the start of pre-season training with all our playing squad and staff having been cleared to participate after Covid-19 testing on Monday. Take a look below at Rob Cornell's first interview with Cheye.