All at AFC Wimbledon and football fans around the country were saddened by the news of England World Cup hero Jack Charlton’s death at the of 85.

Here we reprise the FA Cup tie from 8 January 1977 when Big Jack’s teak-hard Middlesbrough side visited Plough Lane to take on Wimbledon, then non leaguers, in an FA Cup tie.

The picture above shows Jack Charlton facing the TV cameras before the kick-off to a tie that showed any remaining doubters that Wimbledon were ready for a place in the Football League.

Having retired from playing in 1973, Jack Charlton had utterly transformed Second Division Middlesbrough after taking over as manager. By the time the North Easterners drew non league Wimbledon in the FA Cup third round they were one of the most feared top-flight sides in the land.

After travelling south to watch the Dons beat Leatherhead in the second round, Charlton was clearly not underestimating his opponents. “People think that Wimbledon are a load of amateurs who come together for a game on a Saturday - that’s rubbish!” he said. “They train hard, prepare thoroughly and often play twice a week. From what I have seen, they are the equivalent of a good Third Division club. Nothing is going to be easy against Wimbledon.”

And so it proved. Several times in the first half the Dons threatened to cause an upset, but in the end the sixth placed Southern Leaguers had to be satisfied with a replay after a goalless draw against the side sitting sixth in the First Division. Roger Connell flicked a good chance over after twenty minutes and on the half hour the bearded striker hit Pat Cuff’s legs from six yards out. Five minutes later, Wimbledon had the ball in the net, but the referee ruled that there had been a push in the build-up.

In the second half, Billy Holmes teased his marker with a series of clever runs, but in truth his side rarely looked like breaking through the red and white wall. The replay took place the following Tuesday and the Dons bowed out in controversial circumstances on the snow covered surface at Ayresome Park. Early in the second half, winger David Armstrong went down under Kevin Tilley’s challenge and, to the fury of the visitors, a penalty was awarded that led to the only goal.

“I’m just relieved we have it all behind us,” said Charlton at the end. “Dickie Guy was out of this world. I’m astonished that this bloke wasn’t taken into league football long ago.”

Dons boss Allen Batsford had no complaints about the result. “My players performed magnificently against First Division opponents, but they were upset about the penalty decision. They felt Armstrong made a meal of the tackle."

Losing just two of their remaining 24 league matches helped the Dons to win the Southern League title for the third successive year and to secure a place in Division 4. Within nine years, Wimbledon had reached the top-flight themselves and Jack Charlton regularly returned to SW19 to watch players during his successful decade in charge of the Republic of Ireland team.

The picture below shows Middlesbrough keeper Pat Cuff grasping the ball as Roger Connell races in. 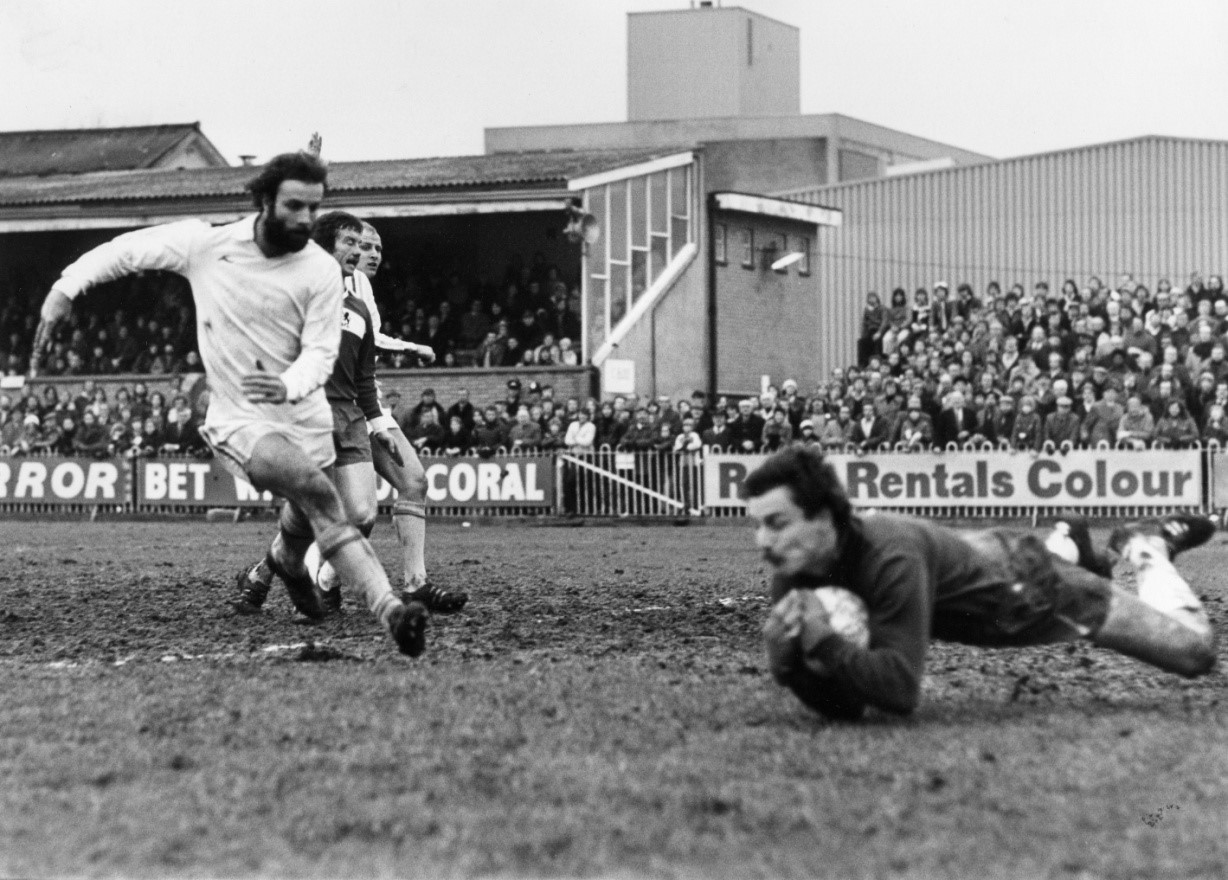