During July, Stephen Crabtree is selecting a memorable Wimbledon match from each of the last 31 seasons.

In the fifth part of the series, Stephen, who is Editor of the Historical Don, looks back to the day in 1994 when the touring England cricketers were dismissed for 46 in the Caribbean, while swashbuckling Wimbledon skittled Blackburn’s chances of winning the Premier League.

Nothing was going to stop Wimbledon in this form. Facing a side attempting to draw level on points with Manchester United at the top of the table having been beaten just once in their previous 16 Premiership outings, the Dons swept Blackburn away with a second-half performance combining pace and power. The meanest defence in the country was taken apart in a seven-minute burst that not only gave the hosts victory but blew a hole in Rovers’ title challenge.

Deservedly ahead thanks to a Jason Wilcox goal at the break, Kenny Dalglish’s side could not cope as Wimbledon attacked throughout the second period. Robbie Earle equalised in the 50th minute before Henning Berg’s own goal with quarter of an hour left set up the Dons for a furious finish in which they scored two more goals. At the final whistle, a frustrated Alan Shearer had to be separated from John Scales as the hosts celebrated their victory.

“In the second half we were first to every tackle, every loose ball, and Blackburn just didn’t get a look in,” midfield man Peter Fear commented. “The way we played tonight, we can beat anyone. I should not think Liverpool or Manchester United would want to face us in this form.”

A little over a fortnight later the Mancunian Red Devils became the latest lambs to the Selhurst Park slaughter as a Wimbledon side destined to finish the season in sixth place beat them 1-0.

The picture below (taken by Paul Willatts) shows Robbie Earle getting in ahead of John Fashanu to strike the first goal. 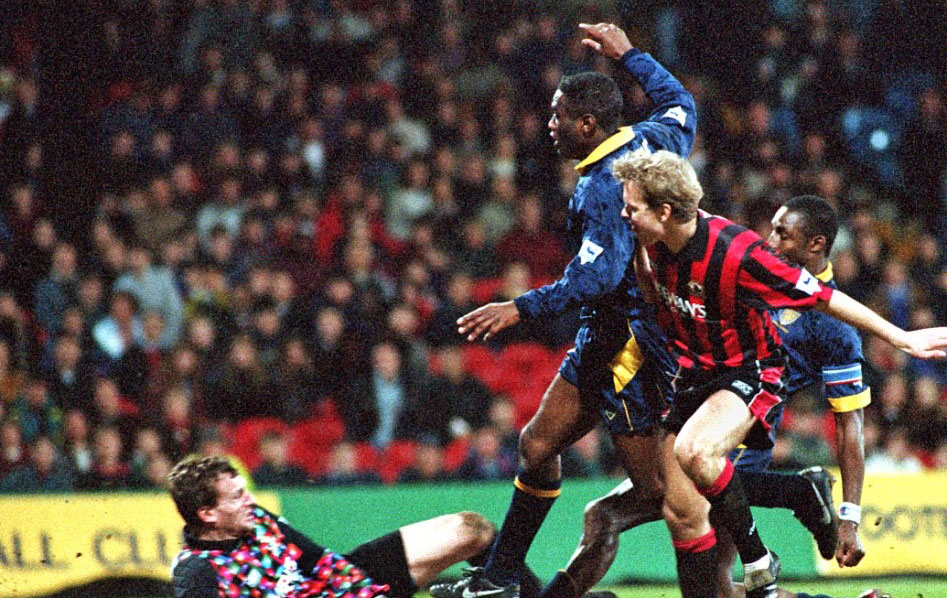