Anthony Ferguson and Will Rose are unlikely to be winning quizzes on Wimbledon anytime soon, but they’ve both made a big impact towards the more important challenge of preparing our academy players for a crack at first-team football.

Anthony, Head of Coaching at our Academy, and Will, who is Academy Head of Physical Performance, were subjected to a surprise quiz called “A Question of Wimbledon” when Academy Manager Michael Hamilton summoned them for yet another Zoom meeting. Though their answers left plenty of room for improvement, quizmaster Rob Cornell certainly provided them with a challenging set of questions! See below for more on how they got on.

Despite a first season with the club that has been interrupted due to the Covid-19 crisis, Michael Hamilton believes that Anthony and Will have added plenty of ideas and knowledge to the task of providing the best environment for our young players to progress.

“Anthony brings so much experience to our environment," said Michael. "He’s been terrific since he’s come in. The biggest thing I can say about him is that he is quite selfless and he’s always about other people. He always wants to know how you are doing and he makes time to get to know the person.

“Will is a bundle of energy. Anyone that knows our environment knows that we’ve had quite a stable group of staff for a long time and for anyone coming in from the outside it was important that they were the right people. I think in Will and Anthony we’ve added two very valuable members of staff who have made a big impact in a short amount of time.”

Anthony is pictured above (left) with Michael Hamilton shortly after joining us and Will is shown below during his appearance on Sky Sports News. As well as providing an insight into how he was keeping our academy players active during lockdown, Will passed on a few fitness tips to the Sky Sports News presenter! 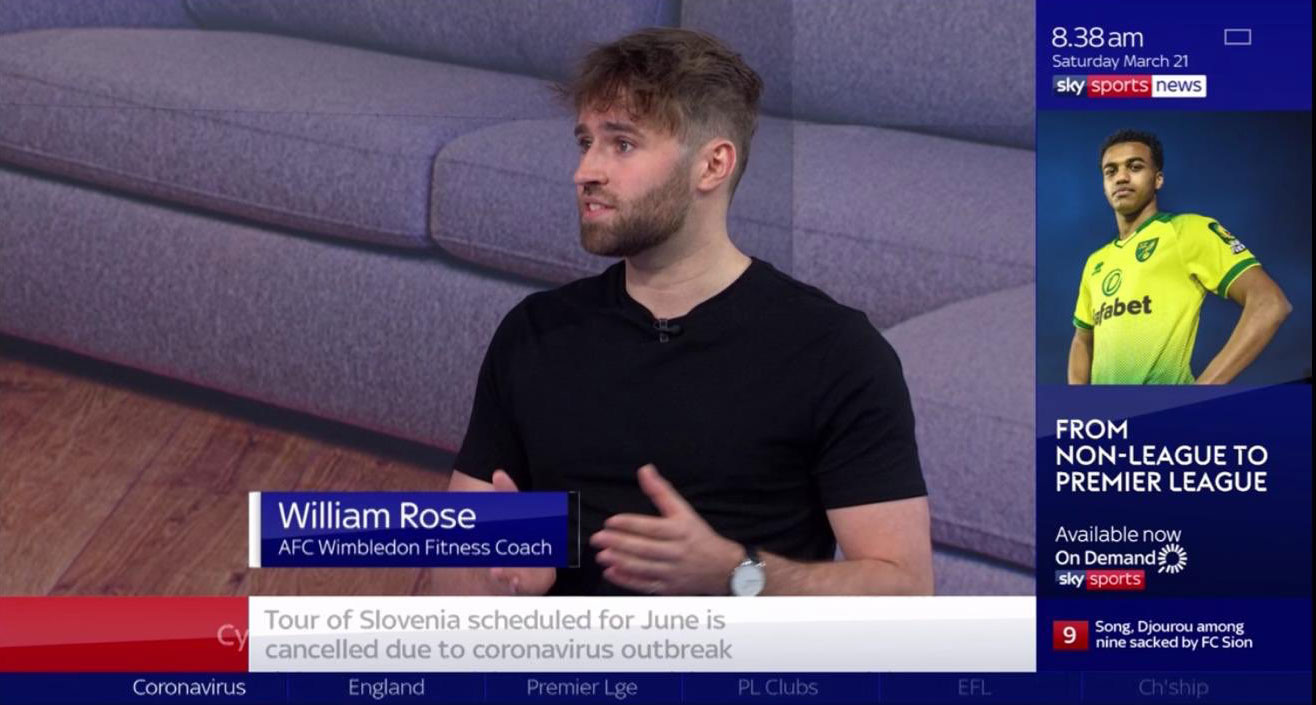 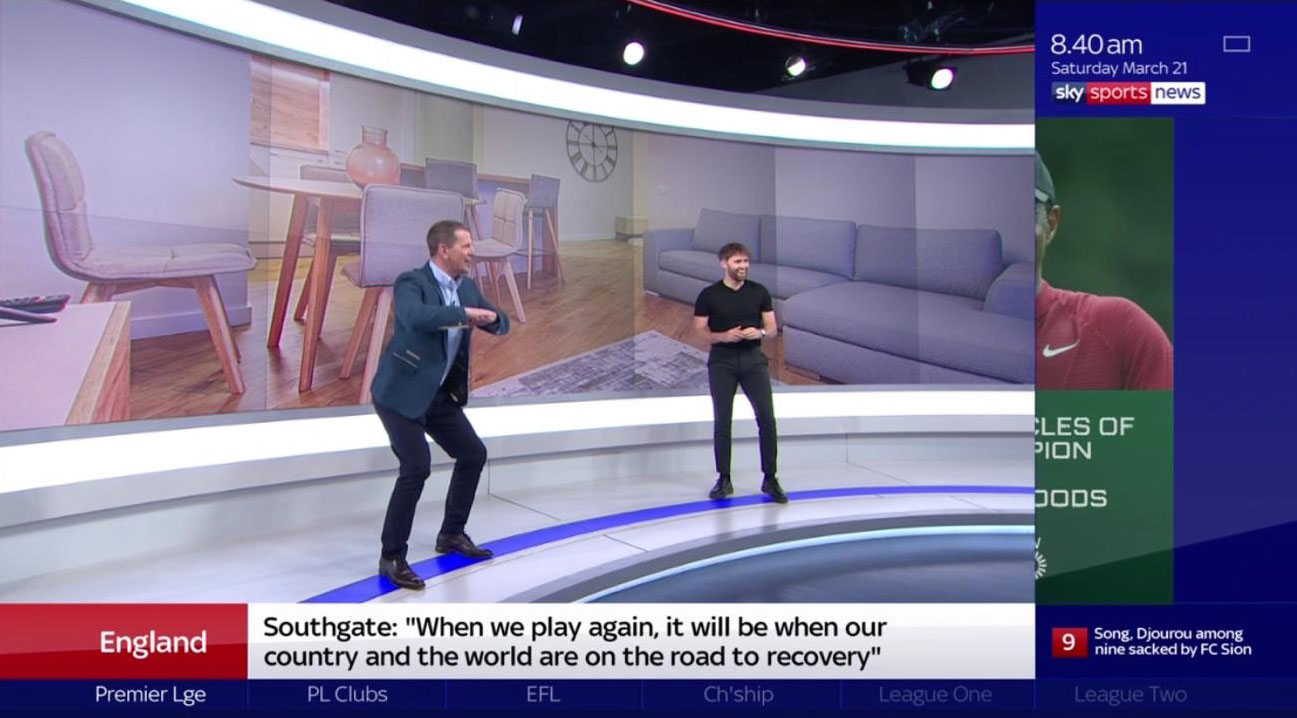 Both Anthony and Will talked extensively to Rob Cornell about their roles and how they have helped our academy players and staff to come through a testing time caused by the global pandemic.

Anthony said: “My role is about supporting the coaches and multi-disciplining our team staff to support the development of players within the club. For me, what it means is giving people opportunities to learn, grow, and develop themselves, while enabling and empowering the players to be the best they can be for AFC Wimbledon. What I have noticed from my first encounters with the club and throughout my time here is how resourceful we are.

“The coaches have shown great creativity during lockdown, which has really enthused me. I know there are other clubs around the country that haven’t had the same level of input from staff and their motivation has diminished. It seems this situation has allowed our coaches to flourish under pressure.

“If that’s how they are going to work, I look forward to really doing what I can to keep challenging them, but also to support them to maximise their potential. I think this pandemic has really shown how productive people can be and the heart they have for not just developing themselves, but really supporting the players they work with.

“Everything I had done in terms of research before I joined showed that AFC Wimbledon were progressive, and inclusive, showing empathy for support and development, not just for the players, but for the staff. You notice that by looking at previous staff who have gone onto other clubs and been successful. There’s a family and a feel within the club that makes people want to be there.

"What I’ve said to Michael and the rest of the staff is that sometimes we will lack resources and facilities that other clubs may take for granted, but a strength is how resourceful the staff are. They are also caring, innovative, creative, and supportive. If you are going to work somewhere – and that’s where you are going to spend a large proportion of your working week – you have to feel comfortable, that you are included, and you are doing something worthwhile.”

Vastly experienced Anthony carries a wealth of knowledge, having joined our Academy in December 2019. Among his previous roles in the game, he worked as a coach at Tottenham Hotspur between 1998 and 2004, before a long stint at the Football Association, where he served in several different roles over nine years.

Academy Head of Physical Performance William Rose, who joined the club in January, having held a similar position at Grimsby Town, talked about the methods he has deployed during lockdown to keep our young talents in good shape.

“We’ve taken everything we’ve done on the pitch, or in the gym, or down at Tooting and Mitcham, and taken that straight onto screens," said William. "We’ve done that virtually over these sorts of methods, using Zoom, and we’ve just kept coaches and players engaged. We’ve got a group of staff that want to develop each other as well as the players. We’re fortunate to have this in place and to grow, even in these very strange times.

“Throughout the age groups I’ve just been getting the players to move in ways that can benefit them, so that they can make a career for themselves as athletes and hopefully at our professional football club. For the Under-16s and Under-18s, I’m preparing them for the physical tasks of league football. A number of the top clubs have a plethora of staff, so it’s just about giving our boys the best opportunity. Whether that’s through technical coaching with Rob, Jack, and James, or physical work with Jenna and myself.”

You can watch the full video interview with Anthony and Will below.