A trip to AFC Wallingford on 23 November 2002 provided an away day with a difference for Dons supporters after they hired a diesel-powered ‘football special’ to get them there!

Five hundred of our supporters hired the Cholsey and Wallingford Railway to get them from the London train into Wallingford, and back after the match.

Quoted in a local newspaper, Jo Clyde, chairman of the railway group, said: “We think this was the first time a preserved railway had been used in this way. It was a big day for us. The Wimbledon fans were very well behaved and there was absolutely no trouble from them. They were there to enjoy themselves and they did.” 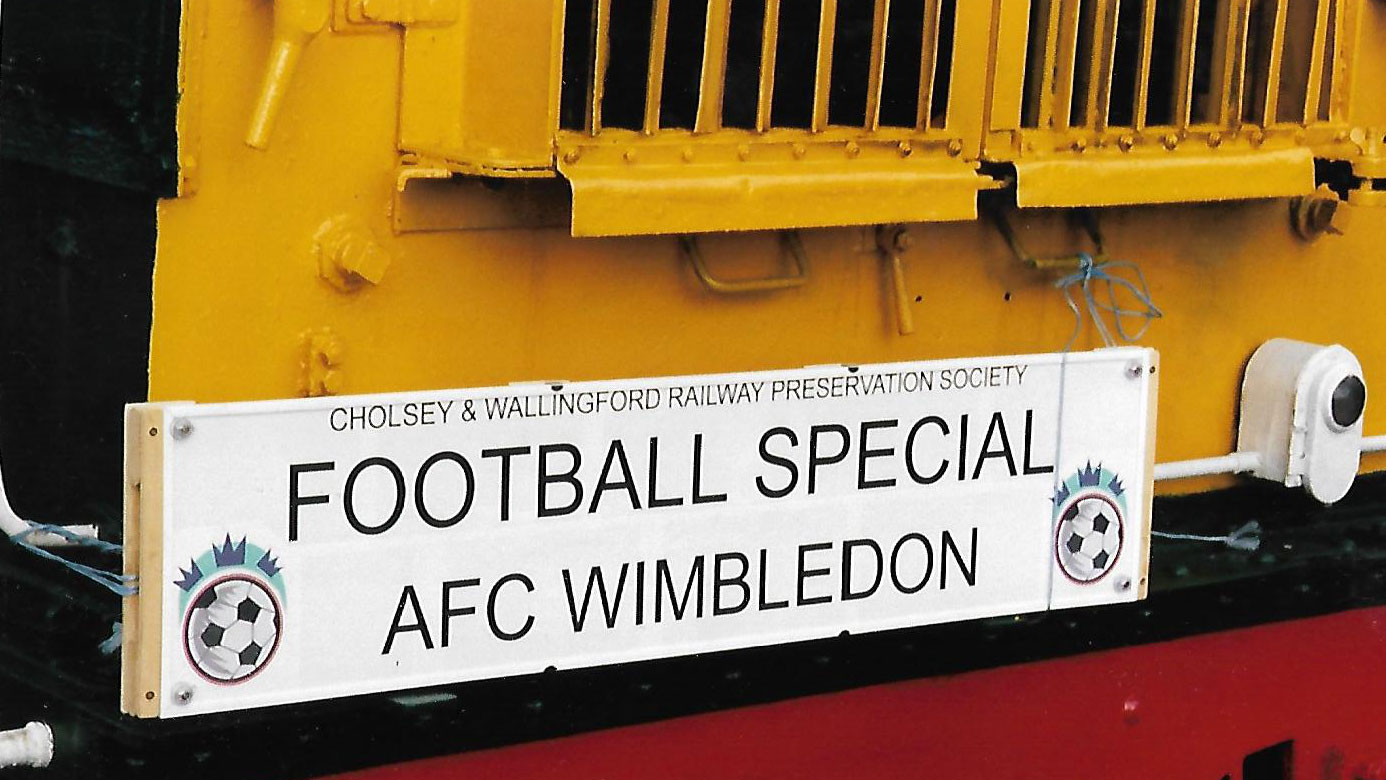 Below is an article by Roger Dennis, which appeared in the match day programme for the Sandhurst Town home game.

Howard Fry is the supporter who realised that using a Heritage Railway was the best way of taking train travellers from Cholsey to AFC Wallingford on 23 November. He asked the Cholsey & Wallingford Railway Preservation Society (CWRPS) to run a unique diesel-powered ‘football special’. The Trust agreed to hire the train and I organised ticketing and stewarding.

My first-class team of helpers met mid-morning at Cholsey. The CWRPS train arrived and we made an unscheduled trip to take some early arrivals the 2.5 miles to Wallingford. This set the pattern for the day. Plans and timetables are all very well, but it’s necessary to improvise too, particularly if mainline trains are late. Thankfully, the CWRPS did brilliantly in taking about 500 passengers to the match.

Because some supporters left early, the first train back departed before 5.00 pm on police advice. Not everyone else could squeeze onto the second train. However, those left waiting were remarkably good humoured- thank you all. The Trust donated an additional amount to the CWRPS in recognition of their excellent work and still made £526 for the Stadium Fund.

Although the CWRPS had been hesitant about transporting football fans, their volunteers ended up full of praise for our supporters. I can only echo these quotes from John Bennett, the train quard, who said: “Your lads and lasses were as good as gold and a credit to the team. I checked Cholsey station, and there was not a can in sight. Much better than a normal running day! Our crew thoroughly enjoyed themselves and I will be ensuring that only the best is heard about AFC Wimbledon at this end. Good luck for the rest of the season and I hope our paths will cross again.”

Reports of trouble in the bar at the game failed to overshadow an away day that had over 2,000 Dons supporters in attendance.

In a local newspaper, AFC Wallingford Secretary Richard May said: The Wimbledon fans were no problem at all. There was a carnival atmosphere in the first-half – it was great.”

Richard added that it was only after Oxford United fans arrived in the bar that fighting and disturbances occurred. There was no trouble from the Wimbledon crowd in pubs in Cholsey and Wallingford before the game. The Dons suffered a 3-0 defeat at AFC Wallingford, who went onto win the Combined Counties League with AFC Wimbledon finishing as runners-up in the club’s first season after reformation.